Just last 200 kilometers left in the season,unfortunatelly without any intrigue for main title as it has been already decided. Still - the glory of winning a race with fastest LFS's aids free car at the fastest Westhill configuration alone is worth the trouble. 4 well known names are in the previous winners list,the question is - who can add theirs to it? One lap around this course is 5 and 3/4 kilometers long,so race will be 35 laps long for the 200km distance. A total of 14 very variating turns put together here makes a challenge also for setting up the car - lower downforce will give you advantage on those long straights but will hold you back in many fast turns and vice versa.

The 4 round season might feel very short,but Dzban didn't even need full lenght of it to secure drivers champion title,same destiny has the nations title - also already decided in favour for Poland. Only title left undecided for final round is teams champions,where leading team has a solid advantage with closest rival being a single driver team,which means one of the three Medrecers-MLG Patronus drivers needs to score just 3 points to secure it.

Signups are still open until 10 minutes before qualifying start! New signups will receive PM with password at some point during saturday/sunday.
matrxs

Hello, im registering for this race

where do i get the password from ? thank u
Eclipsed 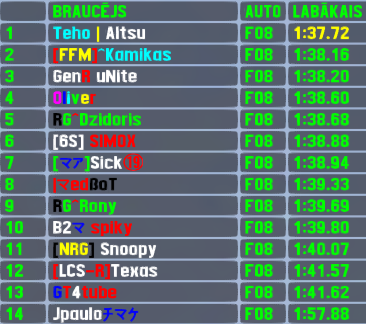 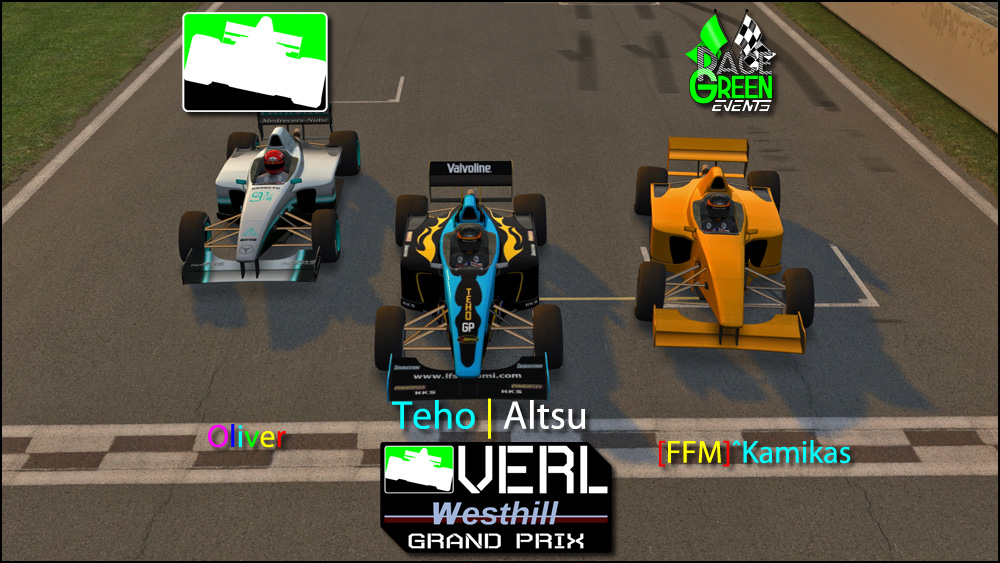 For the third year in row the season final race of the season was hosted in Westhill and for the second year in row the already crowned season champion did not attended,leaving the race for season final round win open. 14 drivers were present to face the challenge of Westhills longer and faster configuration,one of them did not qualify for the race,other 3 retired early and missed out the chance to add few points towards standings beside their names.

Altsu outqualified his competition by 0.4 seconds and scored his 1st pole position of the season,but lost lead even before reaching 1st turn. But that was only due rival's lighter car,as Altsu regained lead after half distance and never gave it up again - 2 wins in row for the finnish driver. Oliver qualified 4th and during 1st lap even fell outside top5 for short while,but his chase was successful as he gained one position after another finishing 2nd and repeating achievement of 2nd round. Kamikas went for fast strategy - lighter car,lower laptimes and it worked well early as he led first 16 laps,but the pitstop was too costly and he fell back in order,only due unfortunes of others aloowed to regain at least 3rd place. Rony finished 4th for 2nd race in row,but brazilian driver Sick finished 5th and became 1st south american driver to finish in top5 in VERL race.

Full season recap and final standings will be available next week.
Eclipsed 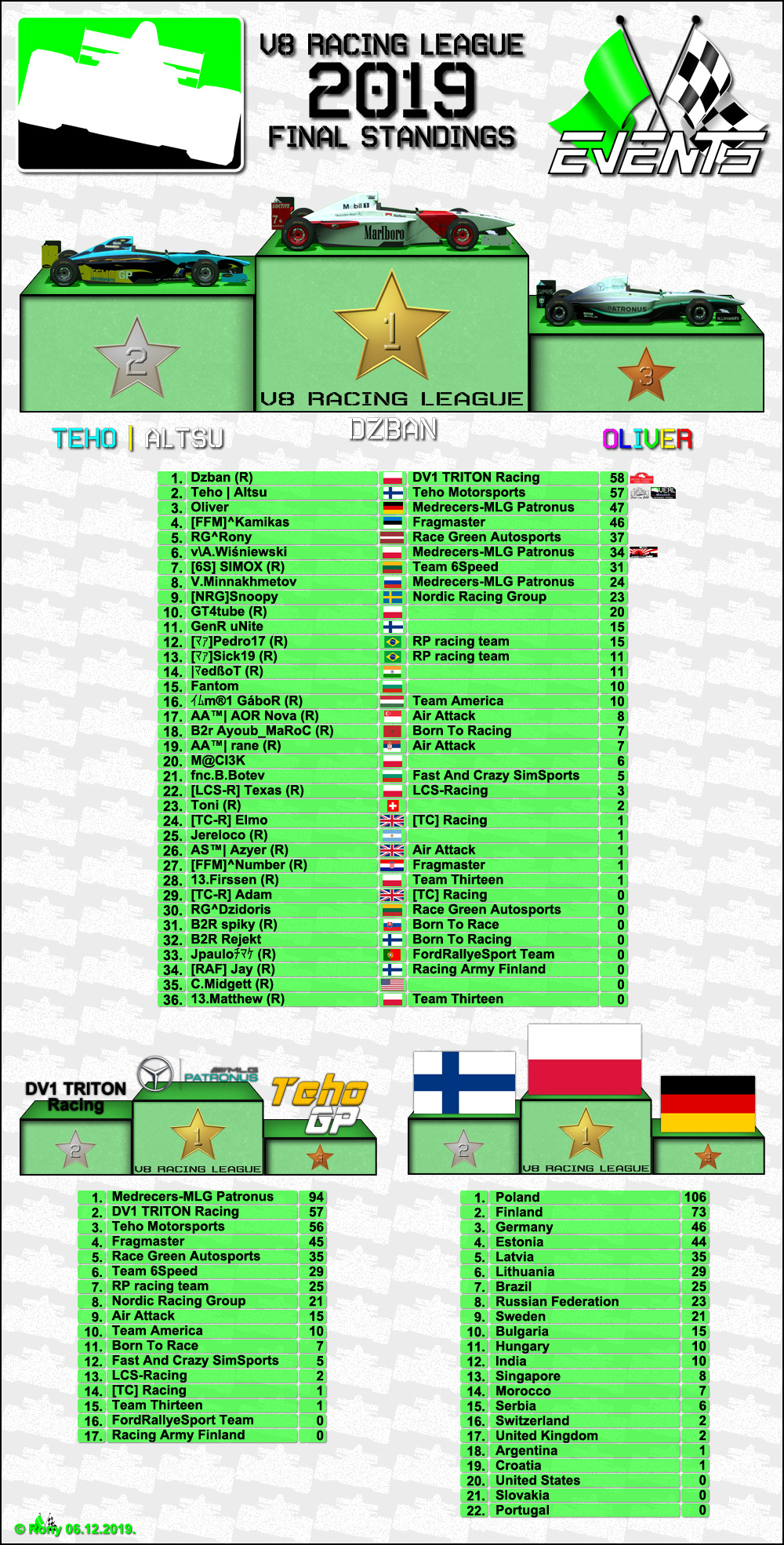 It is almost like a curse - Race Green Events organizes 2 leagues with a total of 13 seasons between both and still there is no returning series overall champion in any of these leagues,as every year someone else takes the main glory. But that just builds up intrigue for the future and deffinitelly does not hurt competition,as it's better than one dominating person through longer period.

Let's start the summary with pure statistical figures - total signups count has shrunk from 49 last year to 42 this year,but actual competitors count grew by 4 to 36. 18 drivers per round is the average attendance,which beat's the previous league record set last year by 1. Attendance ranged from 27 (also new record) in round 1 to 14 in rounds 3 and 4. 28 drivers finished at least in one round while 5 completed all 4 rounds. Apart from minor penalties and warnings there were no actual misconducts during this season,which makes organization happy.


VERL 2019 Drivers Champion: Dzban
The series newcomer from Poland started the season by being the 2nd driver in polish double win,increased his performance in 2nd round by winning it and finished 2nd from pole position in 3rd round - the situation in overall standings already granted him the champion title after 3 from 4 rounds and the newly crowned champion did not even arrived in season finale at Westhill. Interesting fact - he set fastest lap in both races he did not win,but scored no bonus points in the race he won.
The finn Altsu finished last year's season as 9th best,which was a decrease in performance from years 2016 and 2017 where he finished 3rd in final standings - this year he topped it with 2nd place in standings. Altsu is the only driver this year,who scored multiple race wins as he won both rounds 3 and 4,he finished 3rd in 2nd round,but not attending round 1 was the reason why he never had a shot for series title. He also picked up a pole position and a fastest lap,both in final round. The lowest step on overall podium is taken by german driver Oliver,who repeated twice his best finishing place 2nd from year 2015,while he scored another top5 finish in only other round he competed. Defending champion Botsi never signed up to try to defend his title.

VERL 2019 Rookie of the Year: Dzban
Winning the main title while being series newcomer automatically grants also Rookie of the Year award. His closest rival was Simox,who finished 7th in overall standings. Interesting how series drivers pool changed since last year - if last year between top 22 drivers there was just a single rookie driver,this year half of the top 22 are rookies. Last year's top rookie Pete did sign up for the season,but never attended though.

VERL 2019 Teams Champions: Medrecers-MLG Patronus
Just one win (scored by 2016 champion A.Wiśniewski) in team's achievements was enough to clinch the teams title,but one of the 3 driver team was always on podium with high points score assistance from other teammate in 2 rounds is the right way to secure the award. Drivers champions single driver team DV1 TRITON Racing finished 2nd in standings while 3rd position in teams standings was also taken by single driver team Teho Motorsports. Defending champions [TC] Racing was represented by 2 drivers this year,only one of them scored a single point and team finished 14th in standings.

VERL 2019 Nations Cup winners: Poland
Poland started the season with double win and continued by having a winner in 2nd round,a strong points count in round 3 clinched the nations title with a spare round ahead. The defending 4-time champions Finland started the season with a round figure of 0 in points count,but increased the performance during later rounds to at least save the honorary 2nd place in standings. Germany took 3rd place in standings by passing Estonia just in final round.


Race Green Events thanks to all competitors for their attendance and hopes it was fun for them. The V8 Racing League slowly grows bigger with your activity in it,let's hope the next season will be even better! This is the point where we look to the future brought by RGE - there are no changes ahead,9th season of AWS is planned to start right with 1st sunday of the new near,while both RTFR and RTFR XL still provides racing in tuesdays - the latter of those however will return from 8 weeks holidays only in last tuesday of next year's january. This year there is one more special event ahead - for those who regulary follow our actions it is not necessary to mention,they already know what gonna happen in 26th december. And with look further in next year we most likely will see the 2nd season of our new league codenamed STARL starting around may,while 6th season of VERL should start earlier next year,around september - it was hosted later this year due personal reasons...

See you on track!

Congrats!
123
4
This thread is closed