The user "ifastlt" has not enabled PM recieving in this website!

If someone hasn't received it due some mistake,please give a notification!
Thespeed10

I will not be able to attend due to schedule (University) 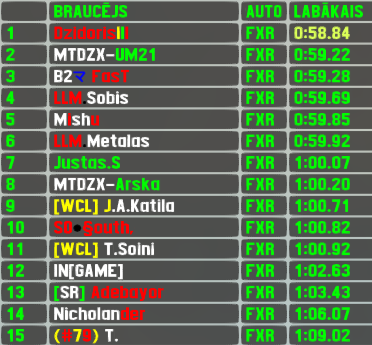 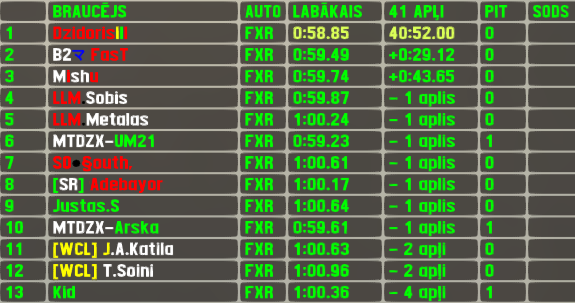 Is the server intended to be password protected in between the events?
Eclipsed 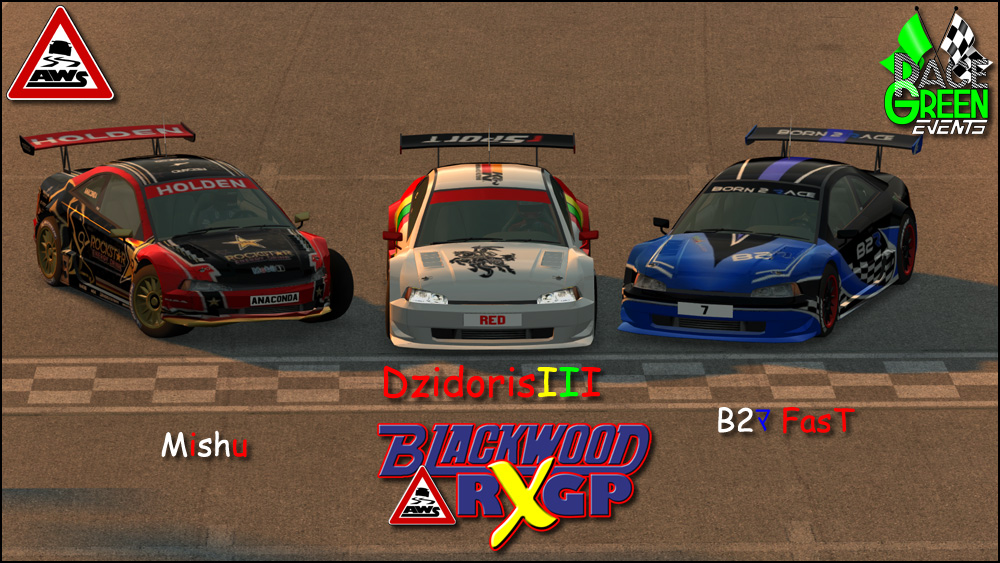 A bit more colors were involved into mix in the 2nd round of the season,but still the flag over winner's head was the same - Dzidoris led all 41 laps and took the victory in this difficult round. Winner of the 1st round Fast this time finished 2nd with Mishu taking 3rd position.

Both round winners are now leading the series table with a noticable gap to others - Fast leads by 2 points over Dzidoris,while 3rd place owner UM21 is already 13 points behind leader. With 4 rounds still to come,everything can be changed,but the changes must be made as soon as possible. Fast is also the leader of rookie table - he has 16 points advantage over Adebayor. FXR Master and Cross Challenge tables are currently same as round 2 results,only difference is that Cross Challenge has only 1 round left.

After 2nd round Born 2 Race still leads teams standings,but their advantage has been cut - the gap is now just 8 points big over LLM,but MTDZX lost a point and a position and is now 3rd. With Lithuania taking all 30 points again,seems like the Nations Cup will be taken by the same country again - 32 points is the gap after 2 rounds over Finland,Poland is 3rd 46 points behind.

A race in Westhill's support roads is next in AWS schedule - for some it will be a familiar track,as it has been used in one of the RTFR events. This will be the round that will show us if the championship battle will stay a duel or if someone else will be able to join the fight - 4 rounds still are ahead.
Eclipsed

Last year AWS introduced a new round in it's schedule - Westhill Street Cup,a race on Westhill's support roads. Not as wide as normal racetrack,with a lot of bumps and twists and also with a lot of lamps,posts and fences that may feel like running all over the track. With this the round features a great challenge for the precision and concentration of every driver,which makes the ever consisting RB4 problem of overheated tyres a bit in background. For those who regulary race in RTFR,this combo will be familiar,for rest there will be info,how fast one can actually go,so at least there are no secrets.

After first 1/3 of the season we have a duel for lead in championship between 2 lithuanian drivers. But with remaining 2/3 to come,which features some a bit more different rounds,there is still hope that the duel will turn into 3 or more way battle for more championship intrigue. Intrigue deffinitely remains in Teams Championship with 3 teams having a great shot for title,while in Nations Cup the situation is starting to turn a bit dominating from one country.

The user "ifastlt" STILL has not enabled PM recieving in this website!

Rather uneventful race for me, but i gotta protest something.

Session: Race
Lap/MPR time: 26:40-27:00 and 37:40-38:05
Involved drivers: Kid222, Yamma (first incident), Aw3som3G4m3rzYT
Description of incident: Aw3som3G4m3rzYT doesn't obey blue flags, interferes with a fight for position on the first occasion, tries to fight back on the second one.
Eclipsed 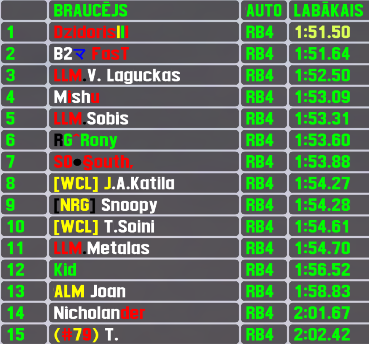 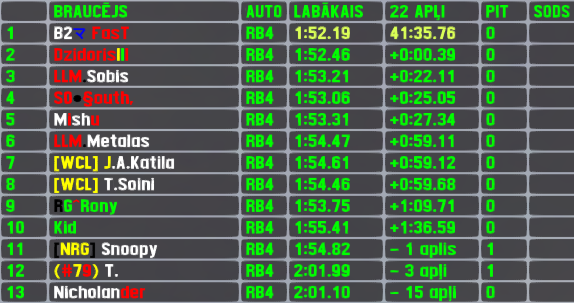 I will retire from the competition due to schedule problems.

This means you will be removed from PM list until further notice from you.
Thespeed10 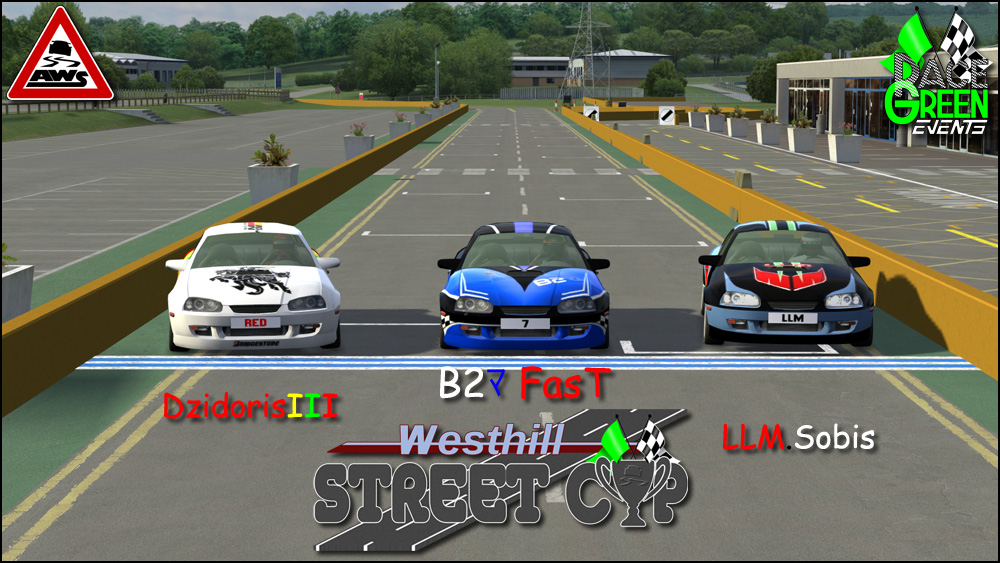 
1st incident - T is obviously off pace,at the situation he has less speed exiting the tight turn,Kid goes for the lapping manouver,which T should allow - he does it very unconvincingly,ending up by hitting Kid in the next turn,losing control over car and causing another contact with following car. All this could be prevented by just simply letting pass,as there was no opponent in catchable distance for T. 30s penalty for causing avoidable incident.
2nd incident - another lapping manouver by Kid at turn one,but T tries to still race like for position,gets even side by side at next turn,causing lost time for the lapper. Aditionally T slightly nudges Kid's car in turn 3 - another sign of situation unawareness. Another 30s penalty for misbehaviour under blue flag situation.

(#79) T. - receives 60 seconds penalty added to his finish time for 2 incidends described above. Additionally he receives a warning for uncautious racing,causing multiple unneccesay contacts,as similar behaviour was observed also in round 2 - future incidents might lead to race ban.
League administration suggests to driver to practice more,improve car control skills,awareness of surroundings and also be more predictible at lapping situations. It's understandable that with small experience the skill level is not as high as the one of others and incidents can happen,but with every next race situation should improve,otherwise a driver is a dangerous obstacle for others racing for championship.

3rd round marks the end of the 1st half of the season,after which we can get some conclusions. The first conclusion - currently the races are being dominated by 2 drivers,as also 3rd round was won by one of them. During qualifying Dzidoris was the fastest,but Fast had much better start and he took over the lead already at entry of 1st turn,leading most of the race. He lost the lead by a mistake in lap 21,which was used by the closely following compatriote,but Fast used traffic to repass and took the 2nd victory of the season. Dzidoris had to concede to Fast,but was just 0.39 seconds away at the finish line. With his pole position bonus point,Fast was able to pull away by just 2 points in standings. Sobis gained 2 positions during the race to complete the 2nd all-lithuanian podium of the season.

After half of the season Fast leads by 4 points over Dzidoris and 25 points over next closest follower. This means that if nothing extraordinary happens,we will have the duel for championship between these 2 drivers. Theoretically anyone has still the shot for the main title as everything that could be done in one half,can be done in 2nd,allthough it's rather improbable that leaders will just watch that happening. Currently the situation divides the championship into 2 divisions,where the 2nd division is led by 3rd place in total standings - Mishu,who is closely followed by another 2 drivers. In Rookie of the Year standings the gap between leader Fast and 2nd place South is 27 points - if Fast scores 8 points more than South in next race,rookie title is already his.
Previous race was the 2nd of 3 in the RB4 Master competition. Fast has won them both and has now 8 points gap over Dzidoris with noone else in striking distance. If Fast finishes in top 5 of the 5th round,he picks up the title.

Currently the Teams Championsip is still led by Born 2 Race,but with withdraval of their 2nd driver,Fast is the only one to score points unless he gets some reinforcements,as LLM has closed the gap in last 2 rounds and is now just 5 points behind. Due not attending in 3rd round defending champions MTDZX has now 28 points gap to leaders and it's going to be hard to repeat last years success. Nations Cup seems will be defended by reigning champions,as Lithuania has scored all 30 points in each of the 3 rounds now. They need to score 12 points more than closest rivals Finland to secure the deal also for this year - that should be accomplishable as the have scored at least 14 points more in each round. Finland has a relatively secure 2nd place,while 3rd place will be decided between Bulgaria and Turkey unless other countries boosts up their performance.

Half is done,other half to go - most of the things are wide open,anyone can still jump on the train. 2nd half will start with highest speeds in the season - Winter 200 is next,a race which is a bit more unpredictible than others and a race where you need help from your competitors to be on top.
Last edited by Eclipsed, Wed, 7 Feb 2018 19:11. Reason : Forgot images...
Kid222

Thanks, though I was horrified by South. In the final laps the distance between us varied around 1-2 seconds, too close for comfort!
Aw3som3G4m3rzYT

wtf are you saying

"tries to fight back for position"

There's a proof - never set server up when you're too tired... 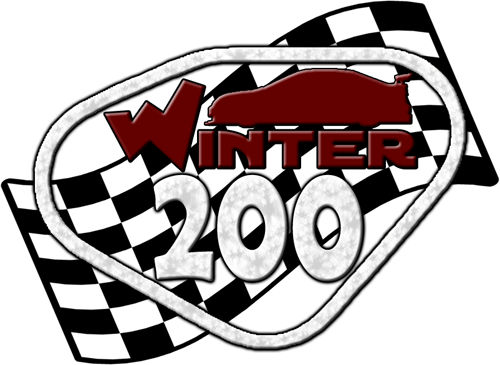 The 2nd half of the season kicks off with a round that has been run every year so far - Winter 200. It was final and deciding round until 2015,but since then it has been moved deeper into middle of the series to allow a bit more standart racing being the championship decider. In the 6 years there have been 6 different winners,allthough not many winners had a 2nd try. As usually the qualifying system is different from other rounds,as in oval only hotlap qualifying shows truly the fastest driver. The running order of qualifying will be decided from Drivers Championship standings - lowest placed drivers will start qualifying while standings leader will take his run last. Everyone will have to run 3 laps - outlap and 2 timed hotlaps,after which driver should spectate,only fastest lap counts of course. 2nd timed lap is optional - theoretically cars are faster in 2nd lap,but in case of a mistake,driver can spectate without finishing 2nd timed lap.

1st half of the season has brought us a duel for championship between 2 drivers from dominating nation Lithuania. This is the round which can change the situation in this round,but it seems questionable if there will be real changes in the top of the table.

The users "lucaf" and "ifastlt" have not enabled PM receiving in this website!