To be honest, after watching these (deadspin.com), I quite believe Tony Stewart actually intended to only scare Ward, but definitely not to hit him - which doesn't excuse him at all. Of course it's also obvious that Ward was not supposed to run on the track. I'm really wondering what the verdict will be for Stewart.

Just to comment on videos in the link - What the f*ck? Are they stupid children? Hitting each other in a practise session, hitting each other while entering pitlane... I just couldn't resist and had to think about LFS and Kyoto 250. If I was in command, these guys would get permanent ban from racing. Maybe even automatically from simracing too.
Mustafur

You have to realize that Americans like to bastardize sport in favor of spectacle. Look at football and hockey. Racing is no exception. Promotors know that drama draws crowds, so they don't actively try to avoid it.

I mean, holy hell, a few years ago NASCAR tried to draw fans with "rubbin's racin'" and that ended up being validation for the drivers to do anything on the track. We saw guys Brad Keslowski get spun and flipped into the fence over a grudge. The organization has reversed it's position slightly since then, but there is still a strong sentiment for that style of racing.

If you want more examples, just look up Bowman Grey stadium. There's hardly a weekend where they don't have a brawl or serious revenge wreck.
Bmxtwins

I used to race in NASCAR Heat with a guy who raced there. He said some of it was worked up by that TV show but a lot of it wasn't.
CodeLyoko1

statement from the driver that was ahead of tony
UncleBenny

Interesting, I believe that was Hebing in front of him and you can clearly see Ward step back when the 45 first comes by. Why did he step forward again in front of Tony? Shocking that anyone actually believe Tony saw him up there and purposefully aimed for him.

Obviously feel bad for the family of the Ward but I also feel terrible for Stewart for having to deal with this, as well as the track. They had really been doing well the past couple years and it sounds like this incident has brought plenty of negative attention to them. They already canceled a race on Wednesday and who knows if they race next weekend.
Cornys

. 32 teams ran an official qualifying lap of record over 200 MPH

Eh, to each his own opinion I guess

. I find it extremely boring

You find it more boring than having one car on the track at a time and having the weather dictate everything, making 'luck of the draw' order so valuable?

Old format was great when you had a couple fast drivers out right at the end and they could snag a pole away, but in the end it was all down to weather and the times of it happening was far less than what we may believe.

I don't know, I find it better when everyone has a fair chance and strategy is being used.
Bmxtwins

Can you explain more?
Mustangman759

only Ryan Blaney set a time in the final session
UncleBenny

Testing for next year going on at Michigan today, I'm sure adding MORE aero bits to the cars is going to solve all the dirty air problems they already have. Seriously, how stupid are the people making these decisions? 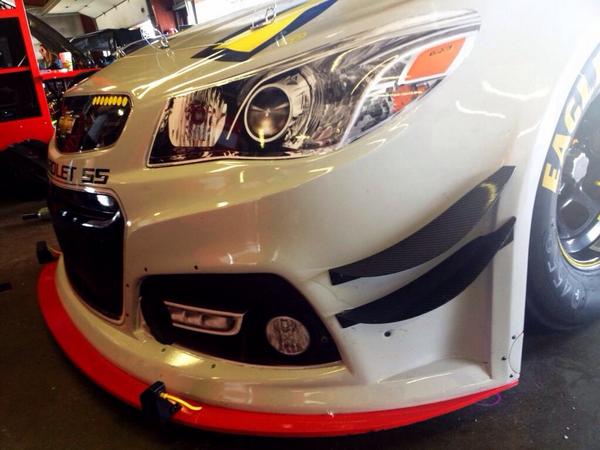 As expected, low downforce is better. Is NASCAR smart enough to figure that out? God, I hope so. The truth is doing this to NASCAR right now:

I don't like the 3 part qualification. Group qualifying is fine, but should be avoided on plate tracks. Elsewhere it's fine if it's just a group session of about a half hour. I think it would be best if they'd just do the local short track style of running groups of 5-10 at a time to reduce weather variations and quicken the process.
Mustangman759

What idiots, the more mechanical grip is relied upon the less aero wash there is.
Cornys

You did better with nothing and for free.

Also need to remember, higher speed = longer "hole" punched through air. So shorter tracks can support more downforce while longer faster tracks would be better off with lower downforce for closer racing.
Bmxtwins

In b4 have to lift at talladega
Cornys

This would be awesome, but probably not happening.

Why have I all-but quit watching NASCAR's top series's? Well, just look at the flag condition summary for last weekend's cup race and everything will be clear

That's right! The first SEVEN cautions were for "Debris". SEVEN debris cautions before any kind of incidents had occurred to lessen the structural integrity of the race cars and track.

It is perfectly possible if there is a small candy paper on the track and someone drives over it it could fly off into the grandstands and kill a child. Could you live with that on your conscience?
12345678
9