The LFSCART Light Winter Series 2010 started with the Clockwise 111 as feeder race to the LFSCART Season Finale at Kyoto. The oval driven in clockwise direction showed the year before in LFSCART that it is a place of very dramatic races. For the Light division 60 laps plus 2 formation laps were scheduled. However the race should end before reaching full distance because of the strickt time of 60 minutes.

17 Formula XR qualified for the race, starting with Concept Racing's number 10 driven by Adam Pettigrew on pole. On his left side was Reno Kööts driving the number 99 machine for spdoRacing who actually qualified with the identical time (45.90s) However, because Pettigrew has done his qualifying lap earlier, the pole was awarded to the Concept Racing driver.

Tim Russel in the safety car led the field during the two formation laps. After he peeled off into the pit lane Pettigrew was the first one to see the green flag in LFSCART Light history, but after only 5 seconds the green flag run was stopped. At the start Marcinkevicus and Fermevc came together and both spun of. Hoiting, Palatinus and Kasperiunas made contact with the two spinning cars and caused the first full-course-yellow of the day. 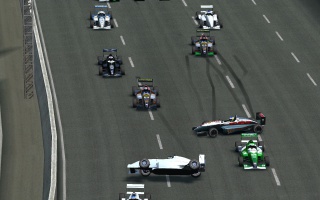 Big winner of the start was the Norwegian Jarl Teien who found himself in 2nd Position right behind the Concept Racing car of Pettigrew. After 5 laps under yellow Tim Russell returned to pitlane. From the restart on, there were plenty of 3-5 car battles. Todorovic, Rose, Murphy, Motorson and Kööts fought for the 3rd position, while up in front Teien and Pettigrew were battling for the lead. Pettigrew was the one who crossed most of the time the timing line first. In the end he was also the one winning the two bonus points for leading the most laps. When the big group battling for 3rd slowly approached the two leaders, a heavy crash in the backfield bought out the second yellow. Eimantas Kasperiunas was in the slip stream of Roger Salama on the front stretch and took the right side of the number 13 Concept racing car. Salama did not expect the move and pushed Kasperiunas unintentionally into the pit wall, both spun and Kasperiunas even started to role. Unfortunately he ended up upside down and had to retire.

Kööts tried to keep his tyres warm during the caution, but the Estonian spun and lost his position to the American Spencer Rose of Something Awful. On lap 13 the second restart of the evening. While the first eight stayed more or less single file for another lap, the further field was fighting again up to 4 wide. Kööts retired on lap 15 after he lost his speed. Reint Jan Hoiting in the number 32 Concept Racing entry slowly progressed through the field after he had been involved in the start accident. When the pit lane opened for the compulsory pit stops, it would have been Salama who entered pit lane first. After exiting pit lane he was still on the lead lap. This should turn out as a big advantage when on lap 21 the two Tiger Express Motorsport of the two Frenchmen Lims Chebbi and Yann Laprevotte came together and brought out another full-course yellow. The nearly unexperienced Chebbi tried to move to Laprevotte's inside, therefore he had to drive over the pit exit apron. Because of the different bankings he lost control over his car and they two collided. Motorson, Hoiting, Marcinkevicius, Teien, Laprevotte and Chebbi used this possibility for serving their compulsory pit stop. One lap later the Something Awful drivers Murphy and Rose did the same.

Again it was Pettigrew who should see the green flag first. This time Todorovic of the Serbian Chromed Pistons was the number one contender for the lead. He was strong on the outside line and kept the car for two laps alongside to the Concept Racing machine. After he overtook the lead Todorovic entered pit lane on lap 34, one lap later Pettigrew came in as well as the Serbian Chromed Piston racers Brestovac and Palatinus. So it was the German Ori Motorson who lead the field for 12 laps while Salama, Hoiting and Rose tried to approach Motorson in his Jochen-Rindt number 0 car. Close behind them was the four car group of the Tiger Express cars, Marcinkevicius and Murphy. Both groups merged on lap 40 and delivered very entertaning racing.

When the group reached Motorson, Murphy Hoiting Rose and Salama split off the big pack again and battled for the lead. Up to this point it seemed to be clear that this race would not end within the 60 minutes time limit and when the final caution came out, this fear became reality. Teien was suddenly upside down after Turn 2. He spun into the inside retaining wall and flipped. The running order was frozen and the caution stayed until the race finish on lap 55, when the time limit expired. Simon Murphy won infront of Roger Salama and Ori Motorson. 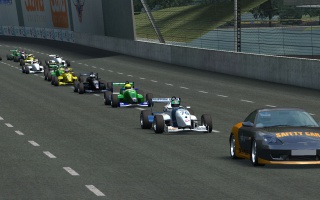 Nice report! Well written, though it's hard to convey the immense excitement in the race. Gives it a professional touch

You spelt my name wrong in the 3rd paragraph though.

Well there are a few mistakes actually, but that's nitpicking. Make me a mod and I'll happily correct them!

There are a few mistakes indeed, but very nice job Falke, keep it up!

I hope to be able to do the short recap of the race tomorrow or during the few upcoming days... However I will try to keep it up. There will be a german article too, and the same stuff for the LFSCART race... I might limit myself to report (the written stuff) only LFSCART/LFSCART Light races as I'm not having unlimited time. The video stuff will be done for all upcoming LFSCART races.

EDIT: Feel free to correct or at least mark my mistakes, as it is a good feedback for me. Either linguistical or in terms of content.
Last edited by TFalke55, Sat, 26 Sep 2009 17:29.
hyntty

You can't use commas before a 'but'.


This makes no sense.
TFalke55

Ehm, just to answer this first here (as it really belongs here):

The Clockwise 111 finished under yellow flag conditions because the time limit of 1 hour was reached. I introduced it because of two reasons:

1. To make it friendly: The better an event is predictable in its length, the friendlier it is for drivers. Drivers can do other things the same day without having to fear to not be able to do something else. E.g. I want to meet with my friends to go into the discothek at 10 p.m. my time on a friday. The LLWS event starts at 8 p.m. with the qualifying (approx.: 30 minutes) and the race. As I know the race is scheduled to finish after one hour I also know that I can actually be at the meeting point in time.

2. To have not too many conflicts with other leagues: The Formula Junior, for example, was scheduled (I think) 1 hour after the actual LLWS event. So starters who also start in Formula Junior are can start in LLWS as well.
TFalke55

The (English) race summary is now uploaded on youtube!

The (Finnish) race summary is now uploaded on youtube!

why did you even consider finnish broadcast without a second commentator?

I don't understand that joke

He's referring to him: