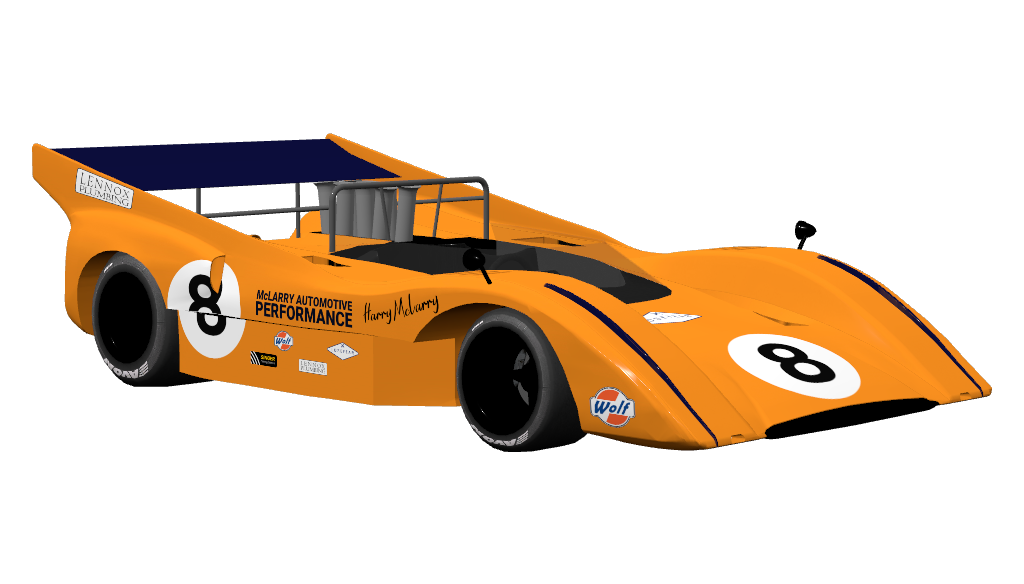 Early 70s prototype
Inspired by the orange prototypes that raced in the Can Am series during the early 70s.
Development discussion thread: https://www.lfs.net/forum/thread/97571

The author of this Vehicle Mod has indicated that this work is an original creation and has provided the following description of the approach:
Made the model using a reference background blueprint.

This is gonna be good

I was just watching some vids of this car on YouTube a couple days ago and wished I could drive it in LFS. Coincidence is funny. This thing is a monster to drive. It was easier for me to tame with a bit less front brake bias and more braking power. The sound is good but I like using Gills_FZR sound more (lots of clipping but it captures the deep rumble of the V8. Part of a sounds pack I think). Overall great work. Planning to spend a decent amount of time in it

I can't speak for what the real car is like to drive but this thing is so unforgiving its scary! I have found the front to get very light on high speed turns and over crests and then the rear will just break loose without warning in the low speed corners ( I know big slicks tend to have lots of grip to the limit and then suddenly let go ). However, the power delivery feels off, its too sensitive at light throttle, I know its a big V8 with torque but in a racing application you usually have the power higher in the rev range/ aim for a linear power delivery. Overall, I think this is on the right track, looks good, sounds good but the suspension needs some work. You also have too much offset on the fronts, it makes it violently snappy when you loose traction under breaking, try extend your control arms and reduce the offset to as low as you can.
Jake_Blasted

Thanks for the feedback! I'm for sure not done tweaking the physics yet. You have to remember though that these cars are unlike any other racing cars we usually drive in simracing. It has an F1 level power to weight ratio, but almost no downforce - especially on the front. When it comes to the engine, it's also not a typical racing engine. It's a low revving 7.6 litre V8, so to get the power figures, you also need the torque.

This video was my main reference when making the car, apart from any data on the car i could find:


Pretty much the only one driven by a competent driver i could find.

When it comes to the high speed push you mentioned, it's mostly down to the default setup. It's on the safe side with the rear wing. If you use around 3-4 degrees, the car is a lot more neutral. Don't expect much front downforce from a car like this though - it's from 1971.

Thanks again for the feedback, i'll keep tweaking it. It will never be easy to drive just because of what it is though, haha.
M3THANOL

Cool man, I do understand that this will always be a bit of a handful/ challenge, these old cars were driven by real legends!

Keep up the good work, it's exciting trying to tame such a beast!

I do think the engine "tuning" can still do with some work though, while it is fairly low revving its not that low, you can hear in the video that it revs pretty high for an old school V8.

This is from the article:

I'll adapt the power/torque to that info. It's only 600rpm off though. Although it's a later car with a different engine, i'll take any kind of data i can get for these things.

Also keep in mind, the limiter is above the optimal rev range and the red line on the clock indicates the shift point - as they would do it back then.

I'll also keep working on the suspension. Because of the weight distribution, the front is super sensitive to any kind of change which makes it tricky.
Last edited by terga, Sat, 9 Apr 2022 12:30.
farcar

Wow, this is an absolutely great mod.
The beastly death-trap it should be. You need to brake early, short shift if there's any dial on the wheel whatsoever, and tickle that throttle.
Just like the video above at Phillip Island, this thing needs sweeping bends of Aston or Westhill.
So much fun just lapping.

Thanks for the mod!
Gutholz

The description says "Central driver position" but it really is right-hand-drive. Can you make driver-side swappable?
Respect for the original 3d model.
terga

It really is just an offset central position rather than a 2 seater. No cars were ever produced with left hand drive.

Thanks for the kind words everyone!

For those interested to race this car,here's some good news: 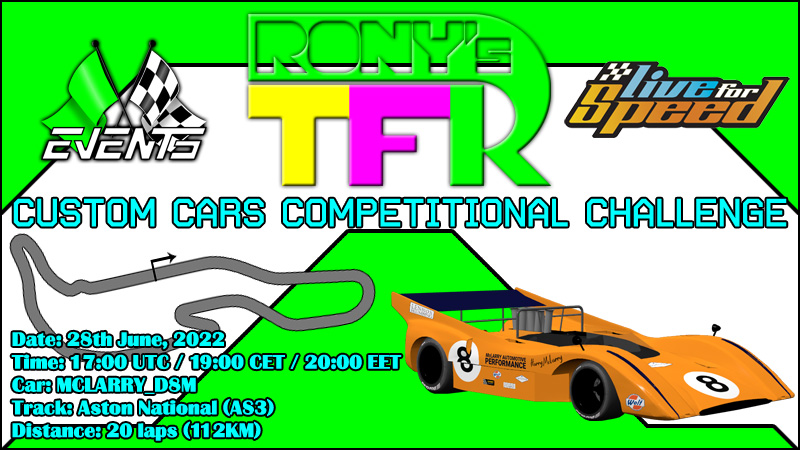