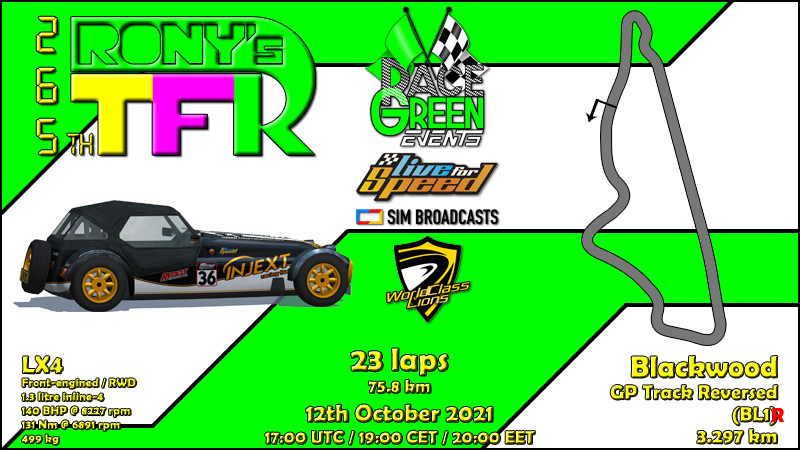 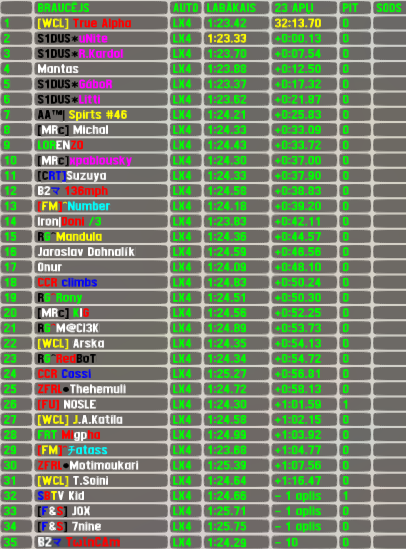 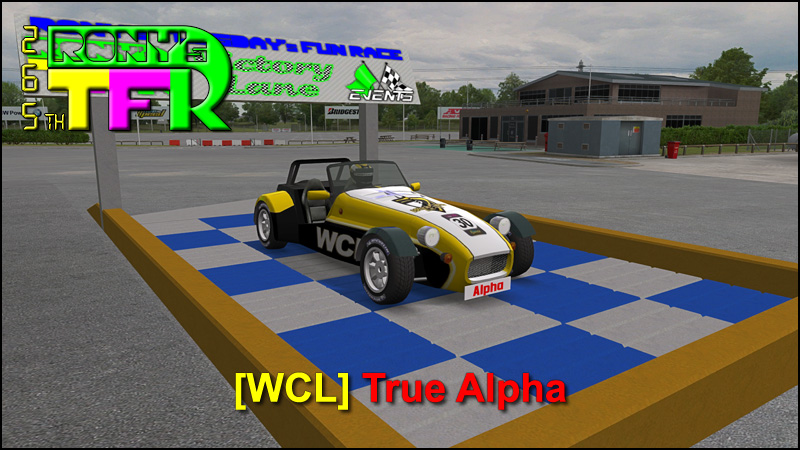 
LX4 isn't really the popular "people's car" with easy handling that offers simple racing and yet we had a full 40 car grid yesterday with 8 drivers who run in qualifying not standing there,most of them due LFS limitation of 40 cars at same time on track. Some drivers were in clear space for bigger part of the race,some were surrounded by competitors for whole 23 laps - plenty of intense action,making broadcaster not able to show all of it.

This turned into fight of 2 finnish drivers,who set times in qualifying just 0.01s apart and finished with gap less than 23 multiples of that. True Alpha was leading majority of qualifying session and only at the very end was demoted to 2nd front row grid position. After losing 2nd positon in lap 1,he regained it soon after and started the chase for leader,which ended with a successful pass for lead in lap 18 and held it until the chequered flag to score his 6th RTFR racewin and 12th top5 finish. Unite set the fastest lap in both sessions (his 5th pole position this year - tied most and 8th overall while he set his 19th fastest lap of the race) and led first 17 laps until he got cought and passed. Unite decided a tactic of following the rival and waiting for last lap,but his tactic was influenced by an unexpected variable - a backmarker on back straight got involved and Unite could not finish the "simple" drafting pass,while also the last turn and last straight moves were unsuccessful - both leaders clocked the 9th closest finish of all time. It was Unite's 47th top5 finish,tying Merenui for 3rd most. R.Kardol had a good start and promoted himself shortly to 2nd position in race,but lost it soon and had to race hard to finish 3rd - also he ties for 3rd most top5 finishes with 47 of those. A newcomer Mantas qualified 3rd,but had to concede the more experienced rival to finish 4th in his first RTFR race,Gábor did not put much effort in qualifying,so he had to start from low position,still reached top5 which is his 21st.


RTFR now goes into 2 weeks break to return with one of the slick tyre cars - hint about combo you can hear in the broadcast. And 3 weeks after this race the next RTFR XL will return (early warning for those not in timezone that changes to winter time - UTC time of RTFR races will be changed!),the combo was submitted yesterday - the finnish made Raceabout will be raced on Kyoto's longest standard configuration GP Long in reversed direction.