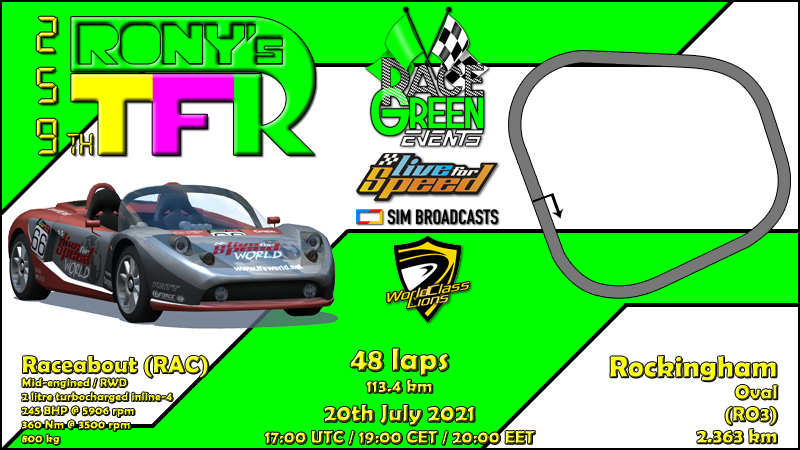 Before things go ugly with discussions,here are statements about 3 most questioned things:

Race Green Events' statement about bumpdrafting:
"With closed wheels cars it is not forbidden,but in case of any reported incidents it will be treated as intentional contact,so everyone has to make sure that he knows what he is doing!"

Blue flag behaviour:
"You may not deny/block a passing manouvre of laping car and try a repass right after it. In qualification it means - stay off racing line and don't disturb drivers on hotlap."

Track limits for this specific race:
"Legal racing surface is defined by white lines. Paved area below (to the inside of turn) is tolerated except for turn 3 - the wide area is already covered with speed bumps."


Also worth to notify even in this race there is no mandatory pitstop - pitlane entry is BEFORE turn 4. (recovering after crash with severe damage and entereing is allowed after turn 4 where entry is still open,but drivers must be aware of oncoming traffic and not cross path of cars racing in full speed!)
Eclipsed 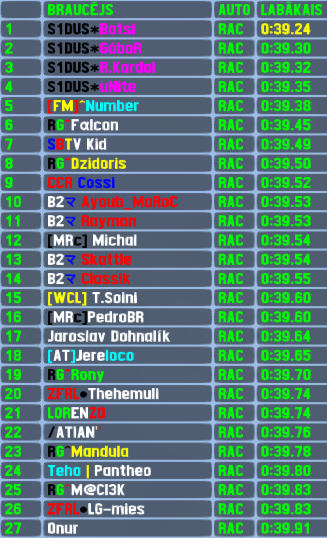 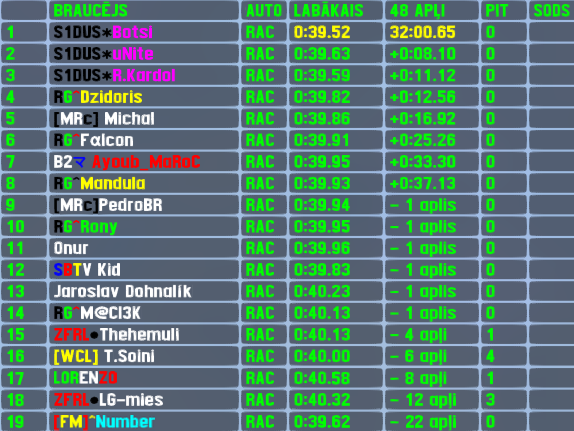 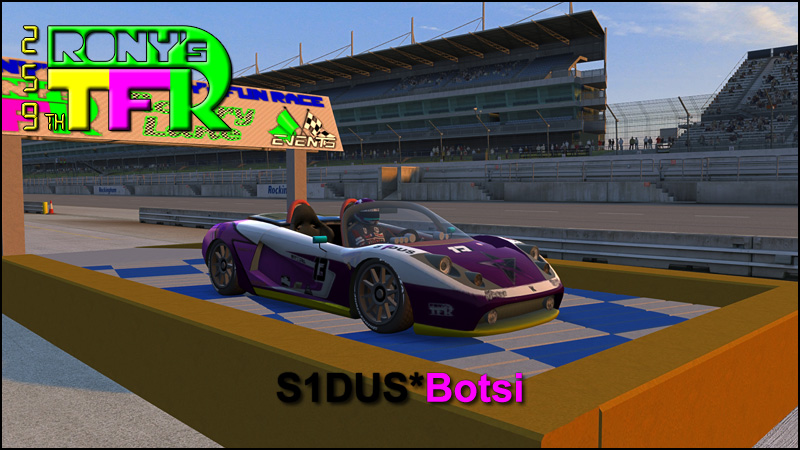 
* PENALTIES :
ZFRL•LG-mies - receives a WARNING for poor racing standards - every driver should be prepared for race and be able to race without spinning the car every 3-5 laps! Future misconducts will lead to actual penalties or even race ban!

A totally different challenge was offered in this RTFR edition - racing a mid-engine roadster on an oval,allthough a quite off-standard one. The biggest problem was probably the weak tyres,which under load were heavily overheating,losing grip more and more. Still a total of 27 drivers were ready for challenge - 2 more than 2 weeks ago in race with more poular car FOX and 11 more than previous highest attendance in races with RAC.

The winningest driver in RTFR history Botsi was winless in last 12 races (he did not attend in most of those),but yesterday he added another set of achievements to his list as he dominated the whole event - 0.06s might not seem a big gap regarding qualifying laptime,but in a 27 car field with results within less than a second,it's not a bad advantage - 32nd pole position earned. After green lights there was not a single car passing him through whole race and Botsi celebrated his 33rd RTFR racewin,scoring his 26th fastest lap of the race in the process,he kept the record perfect - 61st top5 finish in 61 overall race finishes. Unite advanced himself to 2nd place quite late in race and kept the position over finish line,which is his 41st top5 finish,followed by 3rd S1dus driver in top3 R.Kardol,who has now 1 top5 position more than Unite. Best of the rest was Dzidoris in 4th place,scoring his 13th top5 finish,but Michal in 5th position was the only winless driver in yesterdays top6 - 9th top5 for him.


Seems like yesterdays broadcast did not showed the info about next RTFR race,so tough luck for practice junkies,but as usual after street legal car racing we're having one of the slick tyre cars,which one and where will be announced in the weekend before the race. But after all the holdups it's finally known what combo will be raced in 56th RTFR XL - it will be a new challenge,where LX4 will be run on the custom made Schwarzwald course. Final layout is being finalized and as always set for practice in server in the break between this and next normal RTFR,when server will be ready for thesting will be announced in our Discord channel (link in opening post).