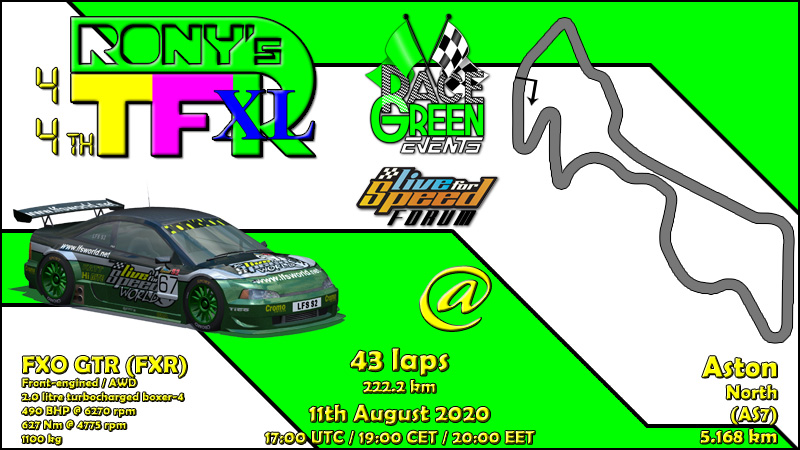 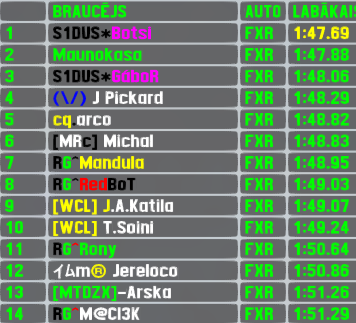 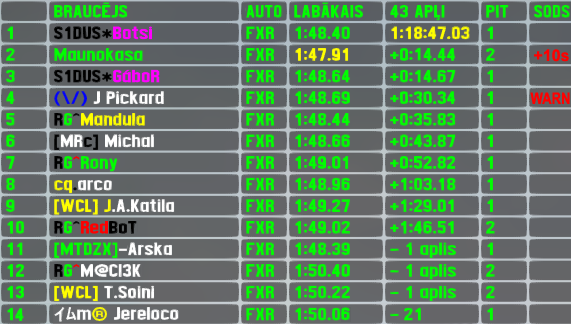 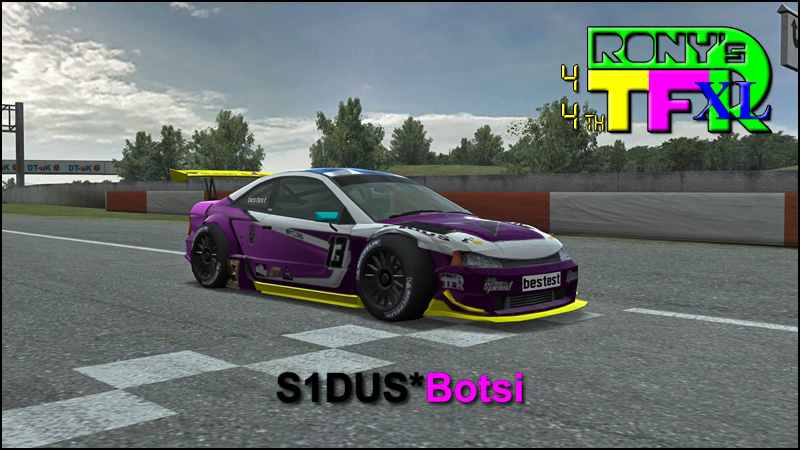 
* PENALTIES :
(\/) J Pickard - receives a WARNING for track limits violation when entering pitlane. When entering the pitlane,also the small chicane has to be respected.
Maunokasa - receives 10 seconds penalty added to his finish time for pit exit line violation.

For the 3rd time this year Aston North configuration was used in RTFR XL race,but unlike in previous 2 occasions,this time the standard direction was run instead of reversed. Also this was 2nd use of FXR this year - kinda logical when 2 popular choices meet. Who knows if it's effect of summertime or hard combos,but this was 2nd race in row with under average attendance,let's see what autumn brings us.

For 2nd race in row there were 3 different leaders,but unlike last time,the driver with most lead laps did not won this race - Botsi led just 1/3 of the race,including the most important lap - the last one. Despite losing lead already on 1st lap,the polesitter kept stable pace and planned his pitstop strategy well to score his 9th RTFR XL racewin (it was also his 9th pole position) and 12th top5 finish. The first time participant Maunokasa started from 2nd position,slipped early in the lead and even set the fastest lap of the race,but miscalculated his fuel strategy which led to 2nd pitstop,causing loss of safe racewin - 2nd position in final results,despite earning penalty on his 2nd pistop. Gábor started and finished 3rd,earning his 3rd top5 finish,J.Pickard was the 3rd driver besides 2 leaders to lead a lap in this race,but finished just 4th,which is his 2nd top5 finish. 5th place finisher Mandula is the only top5 driver to finish in other position he qualified in - he gained 2 positions during the race and scored his 2nd top5 finish.

* FUN FACT OF THE MONTH :
With 14 drivers starting the race and 14 completing at least half of the distance,this race goes into RTFR XL history with best finishing rate - 100%. There were 3 other races with 100% finishing percentage,but these were with just 8 or 6 participants.

* CLOCK PITTER OF THE RACE :
10.08 seconds workless pitstop for J.Pickard earns the mention and he was the only driver to complete the race without any pitwork. Funny,that the usual clock pitter had an identical pitstop,but he decided to destroy a tyre with 2 laps to go and pit for a new one.

* FIELD RUSHER OF THE RACE :
Not much movement in the field as 6 drivers finished in same position they started in,but still there was some movement - Rony started 11th and finished 7th,gaining 4 positions during the race,twice more than 3 best rivals,from which 2 where his teammates.

* HONORABLE MENTION :
Again a honorable mention to someone with great top pace,but some bad luck during the race - Arska set the 2nd fastest lap of the race,but overall pace was good enough for just 7th position,which was also lost due a blown tyre.


With usual 4 weeks gap the next RTFR XL will come with the slowest car of LFS - UF1,the venue for this race will be South City's longest standard configuration with according name City Long,it will be a 34 lap race at this combo. But already next week the next normal RTFR is scheduled using one of the street legal cars,more details will be posted this weekend.
teppari

..."but he decided to destroy a tyre with 2 laps to go and pit for a new one." please... I didn´t try to do that. Just had to drive as fast as possible every lap.... Unite was coming from behind..