In the August progress report we talked about the new shadows and lighting system and showed pictures of the updates on the Blackwood track.

This month you can see some screenshots of the Rockingham track, including real vs virtual comparisons, and a few pictures of shadows working with moving objects and the layout editor.

Shiny! Thank you for the report!
lfsrm

Seems the real Rockingham is not having the sausage kerbs nor sometimes the green area to save your ass. What is the reason to add them ? avoid cutting (sausage

The real life pictures are probably taken at a different time from the scan, i'm sure the curbs and the extra green stuff was there when Rockingham was scanned for LFS
Scawen

I think the sausage kerbs were added after our first visit to Rockingham and the laser scanning.
https://youtu.be/hP9tIAsMBKQ?t=828
Flotch

Ok, thanks.
Interesting video btw.
When it reaches the output of Gracelands corner, he says like "in uk rule we should not go into the green section" (after 21min20s)... It could be an hotlapping rule ...

It looks beautiful, thank you!

Nice job! This grass.. these plants and earth looks so amazing! But imao now asphalt looks too clean. And for the curb too glare i think, it just how i see. 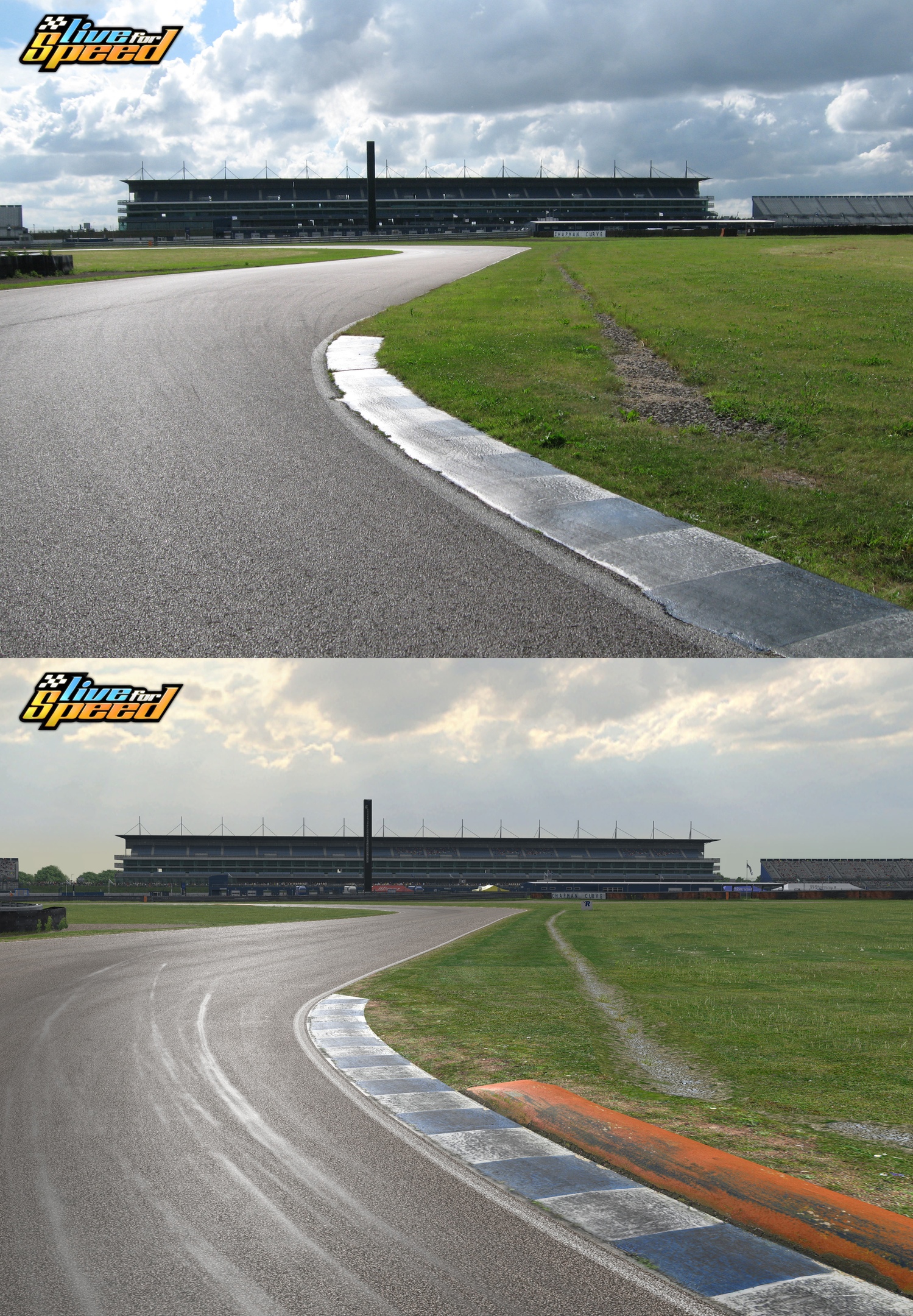 Hmm, the plants and earth really look amazing in the real photo

and the tarmac seems cleaner in the real photo, than in LFS.

Strangely the kerb glare in LFS looks more realistic than the real thing!

in section after this line : Here are some comparisons of real photos with LFS screenshots

picture 2.
those lines on the tarmac , how to get rid of those lines ?
it seems to me i have this on several tracks,not only rockingham , and using alot of different files for road/tarmac, i see this happens with 80% of all files i try. or make myself. so is it just so, or is it possible to either smooth it out so it gets to fit more in coloring on the other parts of the file , or is it just impossible ?

im askin because if going several hours on a track you eventually get exhausted in the eye from it. so i would highly appriciate if theres something that could be done for this?


EDIT: love the new shadows. also looks like black is true black on the pictures. which i am glad to see because it means i can take more advantage of my screens deepfield at a massive 600hz. which again means i can reset my contrast and brightness levels back to normal agin .. hehe.. atleast thats how it looks for me now. will the shadows on the pole picture than move around the pole if you drive around it like a shadow would on a sundisc clock? if so. then i am not only happy about it. but thrilled even.love to see the moving objects gets to shade the screen too.massive leap forward. and a HUGE step for LFS kind. and thx for making it

New round of comparisons:

Most of the 0.6T versions were done in open config, so there are a few objects missing, sorry.
Scawen

edit : the shadows in the T1 of Blackwood are just so nice onto the last pic

That looks amazing!
If it wasnt for the grass i would still be guessing which one is real and which one is not.
gu3st

Looks amazing guys. The very last one is my favourite.
Breizh

Now the cars looks off

Will they be updated at some point?
Scawen

I keep getting that question.

It somehow seems a bit of an annoying question, because it is quite obvious that many of the cars need to be updated (have a look at the RB4 for the most extreme example) but we are on the tracks at the moment. There is only one Eric. He does one thing and then another. Not both at the same time. It is obvious that he would not have failed to notice that the cars and drivers could do with an update.

What I do keep saying, every time I get this question, is that the tracks MUST be updated before we can do a release of the new graphical system, because with the new system, the graphics and shadows are broken unless the tracks are updated. So if we released now, you would have a game full of bugs. But the cars are no worse than they were before. Therefore they do not stop us doing a release.

This means, the cars have a lower priority than the tracks. There is no reason to delay the release by several more months in order to update all the cars. It is a separate subject, though it is quite obvious that they need an update.
Last edited by Scawen, Sun, 23 Sep 2018 16:28. Reason : stay calm
Evolution_R

Yes! After the physics & graphics updates.

EDIT: posted at the ~same time