Good job again, Scavier! I just want to ask, have you made that one chicane in BL historic more clear that you can just drive straight through it? (I mean that one which separates BL1 and BL2 tracks)
Flotch

come on, it has not been seen to avoid massive heart attacks beetween the readers.
Evolution_R

If someone is interested - i got inspired by the new images and decided to use them as menu background:
https://www.lfs.net/forum/thread/92559-Menu-background-based-on-Graphics-Progress-Report
Chunkiegg

Looking great! Loving the new lighting effects and also the specularity of different materials, and it shows how they can make a hell of a lot of difference in visual fidelity.

For me, it's like going from GTA3 to GTA 4 in terms of how much of a difference the lighting/shadows make to the whole ambiance of the scene. When I first played GTA 4, I could just sit there are watch the world go by because every second made a difference to the lighting, shadows, weather affecting specularity of objects and then blowing stuff up and admiring the particle effects

Scawen, you mentioned that Eric has been doing some rebuilding parts of the tracks due to changing how the worlds are lit/shaders, when Eric's work load lightens up (if it ever does), would it be possible to get a run down of what and why the new bits have been rebuilt?

I've worked in the games industry as an environment/character/vehicle artist on PS2/PSP era consoles and any reports on workflow/issues and how they were overcome is fuel for the brain and definitely inspiration.
Scawen

When we load an old track into the new lighting system, it does an auto adjustment for the light colour to try and look as close as possible to how it did before, though it does look a bit different because of the gamma corrected lighting. In most cases that is a better look, even without any manual adjustments.

But the new lighting system cannot be released with tracks in that condition, mainly because the shadows don't work properly with all the buildings. Some of them were built long ago when there was no free view mode and they would only be seen from track level. In those days we saved polygons and a bit of work by not always bothering with a roof. Now it turns out that doesn't work with the shadow system. The shadows are only cast from surfaces that are seen from the sun's direction. So every object needs a top surface. For example South City looks good with the shadows, but there are many places where the shadow is missing or there are various shards of shadows around.

So that means every track must be visited to do some fixes. The next thing is that we have shine on roads on some tracks now, and it would be quite inconsistent if there isn't any shine effect on road surfaces at another track, so it always makes sense for Eric to go and sort that out. But he is not comfortable with just updating a few textures here and there on an old track. He wants to do a better job, updating barriers and walls to have the right shine effect too. Then he sees old construction methods and things he wants to do a better way. Also he sees corners that need some adjustment, maybe they were too wide or there isn't enough detail or it's a corner that has caused problems while racing over the years. Sometimes things can be improved a bit for the open configuration support as most tracks were built before we had that system. All these things add up so he ends up doing at least several weeks on each track.
Chunkiegg

@ Scawen, thanks for the write up, it sounds like Eric is giving it all a proper seeing to!

I've been in a similar situation myself, I worked on a port of a game from PS2 to PSP and had to rework old geometry to suit the PSP as all the assets were created in the earlier days of the PS2. As you might imagine, there were environment assets that used modelling techniques that were pretty old school (relying on large surfaces with large amounts of uv repeating, cuts made in to the geometry for vertex lighting, etc) which we had to adjust to suit the PSP better.

It's all worth it though when the final result goes beyond what the original assets could ever have achieved, and I'm sure that when Eric is done, you'll have a base level for the geometry that you know is rock solid.

Can't wait to see the fruits of the labour though, sounds like this will be a pretty beefy update!
Forbin

Oooh. If I may inquire about specific examples, does this include the flat-out (in the FO8) chicane on FE2's front straight, and KY3's transition between the oval that necessitated Boothy's chicane? Maybe AS3's final chicane, too?
Evolution_R

Scawen, I have a question regarding upcoming graphics update. Version 0.6K brings a new reflections system - nearby objects are visible in new dynamic reflections on cars, but i've noticed that not all nearby objects are visible - the road surface, road markings, kerbs and the grass. Is it possible these 'objects' to be added to the environment map of the dynamic reflections? An example - two screenshots from CarX Drift Racing Online: 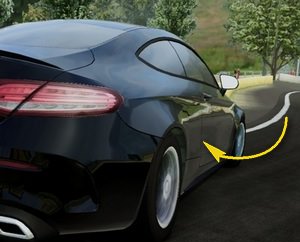 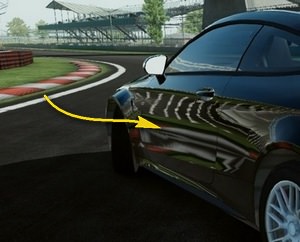 And a little suggestion about the Layout Editor - is it possible to increase the stored views from 10 to 20, and the maximum transition time from 4.0s to 10.0s?

It would be absolutely amazing if that is likely to happen in any of the future updates. Thank you!
Last edited by Evolution_R, Sat, 1 Sep 2018 13:58.
PeterN

This artifact of reflections is an optimization that Scawen did so that only an upward facing render is needed for reflections. Basically it's by design, not a bug.
Last edited by PeterN, Sat, 1 Sep 2018 15:16.
Racer Y

Uhhh.... to be honest the existing shading/reflection in LFS looks more realistic than your example. Your example works the other way with all that reflection. Does every car have a freshly waxed lacquer paint job and rolls off the show room floor before hitting the track? LOL most of what I've seen from newer titles are so overboard with all these reflections and solar flares and what not, they kinda remind me of the painting Vanilla Skies more than any sort of realism. Way too over the top IMO. The finish on the LFS example looks more along the lines of the automotive finish of the car for what it is. I mean really. Who the hell puts a paint job that costs five digits on a 15 year old car that's a beater? The example you posted? I'm haflway expecting to see a tree with a pocket watch draped over it around the next corner.
Now if you went on about the need for things like paint chips, scratches, uneven finishes (Ever see a real race car up close? Some have really crappy paint jobs) I'd be inclined to agree. But all this shiny stuff? Not so much.
=EL 34=

lol
good joke. We should make a meme out of it.
...lousy nvidia. it turns out these freaks underestimate the graphics abilities of the old iron with the help of new drivers. Eh.
nacim

He didn't talked about the shading though. He just asked to have every object drawn in the reflection. Basically an option to use a dual parabloid map instead of only one, or even a cubemap maybe.
aanrus

I think once the graphics update is out, the active userbase will slightly increase. The "big" hit will only come after the physics update.
aanrus

...and will updates interiors of cars or 3d models all cars. (this is secondary updates)
Dygear

Is this limited to a single light source? Could you for example add track lights for night races? Can the sun ... set?
11SuLLy11

Alfano strips are a nice touch

Shit. Now I have to upgrade my PC.
Evolution_R

Yes, i was asking about this!

If someone is interested for an updated version of the car preview screen: https://www.lfs.net/forum/post/1940372#post1940372

Just don't go silent for a year and a half now, please.
Flotch

They plan to show other tracks in a few weeks, each track to update takes several weeks ... every unit is in weeks now, that is pleasant !! Be confident !!!
SimulatorRental.com

Wish I could use my moderate CAD skills to help finish the tracks.
F.C.Barcelona

let's be honest the graphic update is basically to attract new players because the veterans of place will continue using lfs even with the obsolete graphics..

Hey. I was on a roll. And yeah. As an option maybe. But looking at my crappy cars and most of the others on my street? They're really not that reflective.
1234
5
6
This thread is closed