As a reminder, my layouts are running on Racon's server "PiranMoto BL Industrial" and there is also lapper system (use !top), would be nice to see more name in statistics

Feel free to use the layouts in your server, events, whatever as long as you share them free


Currently there is running Boreas layout. (Unfortunately the statistics shown on that link are not anymore available (was another server) but just to have a look what kind of times have been done there half year ago...)
Last edited by lucaf, Wed, 13 Dec 2017 21:06.
Racon

Sheesh, I give you a couple of laptimes to beat and you go and fill out the whole table!

If you think you master IndustrialEurus (next host of Ronys XL events), beware of Glaucus - the big brother of Eurus! Faster! Longer! More dangerous!

PS: The server name has had the spaces removed since the original post here, it's now PiranMotoBLIndustrial

I noticed Eurus hadn't had a run out, so it's up now

Do you find any drawbacks on this idea? 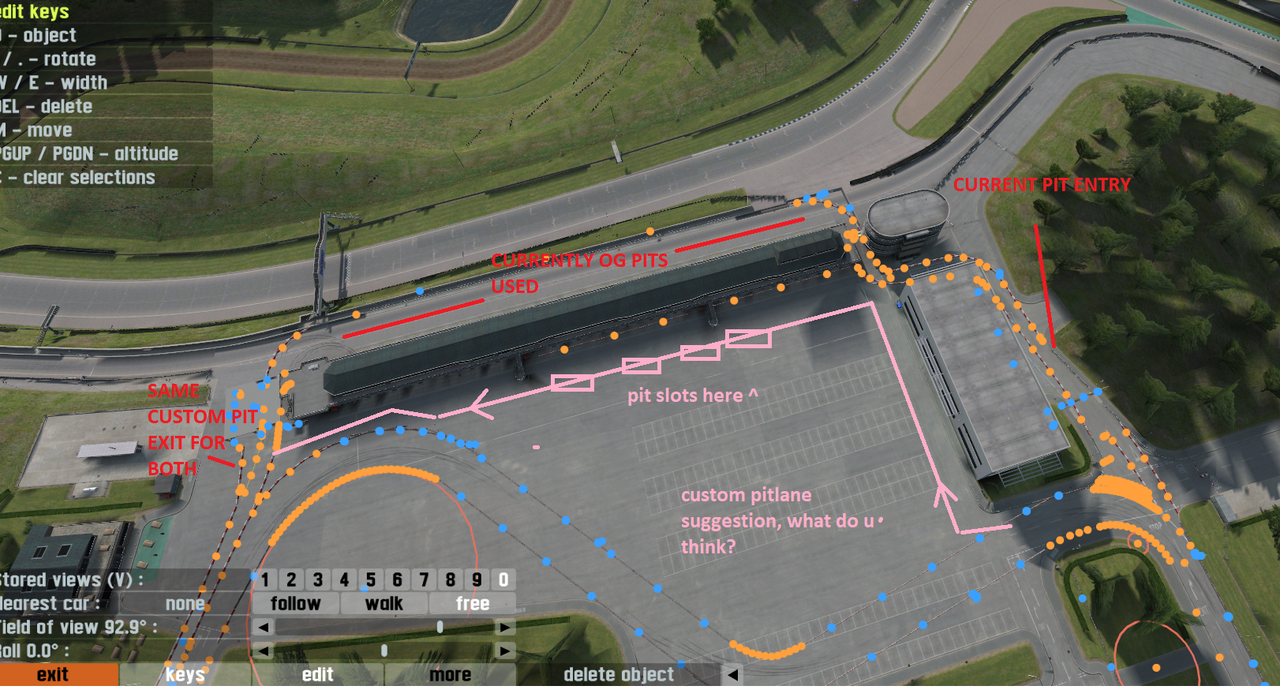 btw. anyone would like to beta test the layout? Maybe you guys find something to improve.
Racon

The pitlane itself is fine as it is IMHO, but a new one would be fine too

The entrance could use a rework though, that braking area is difficult enough to get right as it is without cars headed for the pits to contend with. It should start from a position where the line for the cars staying on track has already moved out from the wall ideally, so probably closer to the right hander in the middle of the pic than the left hander on the right. A big, gentle S-shape from there to where you have the boxes in the image, or maybe just run the boxes along the track shape? Running it along the track gives you enough space to do the through-the-boxes trick, too.

PS: I'm close to adding custom pit areas with speed limits for all the PiranMOTO servers (testing work in progress on Debug), so you could still have your speed limit for the custom pits there. I'll be around late tonight if you want to test the track... I was blitzing Eurus last night, so I'm half-way up to speed already

Yes true, im not sure if I want to put time on that. Though I like the idea the cars start from the car park side, instead of racetrack side.
lucaf

Final versions so far. Any bug reports are welcome. Feel free reusing them as you want. Have fun!

Would be nice if someone records one hot lap on both layouts, I could include them as youtube-vids on the official layout page.

edit: GlaucusRev layout updated, just couple of cosmetic things, banners and signs which were not "reversed" from Glaucus layout on which I based the Rev layout.
Last edited by lucaf, Sun, 4 Nov 2018 14:08.
Racon

The foward route is up at PiranMOTOBLIndustrial.

I love it all, but that last corner especially is a thing of lumpy beauty

I uninstalled my wheel, so needed to wait someone drives a decent demonstration lap on these. Thanks jackson93 aka Maciek.
Download link two messages above ^

Ooops, outdated info that I neglected to update! I recently rejiggered my servers and have done away with PiranMOTOBLIndustrial. All tracks that were available there, including all of Luca's BL Industrial series, are now available on PiranMOTOStreetRacing instead