Hello,
I didn't saw anyone posting it here, so i'll do it. If someone wants to buy new wheel in the near future, he may want to wait little bit for that: http://feelvr.game/. It is prototype of DD wheel, not yet released, but it seems like it will be a good deal. For a price of estimated $400, you could be able to buy direct drive wheel build on small MiGe, so comparable with small OSW, but for less than half that price, and ready to go, without any building. Just need pedal set and shifter. It's not yet known where they will be releasing it, so it's not 100% sure. But i myself decided to buy new wheel, and my first choice was T300 alcantara, but after reading reports about it's durability, i've started reading about OSW and DD wheels in general, and then i've found that Feel VR. I decided to wait till they'll be releasing it, since it seem super worth, and regular wheels like logitech thrustmaster or even fanatec, are like toys, compared to DD. So just wanted to let you know, that something like this exists, and you may want to consider it before throwing your money on new wheel

PS. They also have cheap motion simulator but, same as wheel, you cannot buy it yet. Still it can be worth waiting

I wonder if they'll be selling these glorious unitards also: 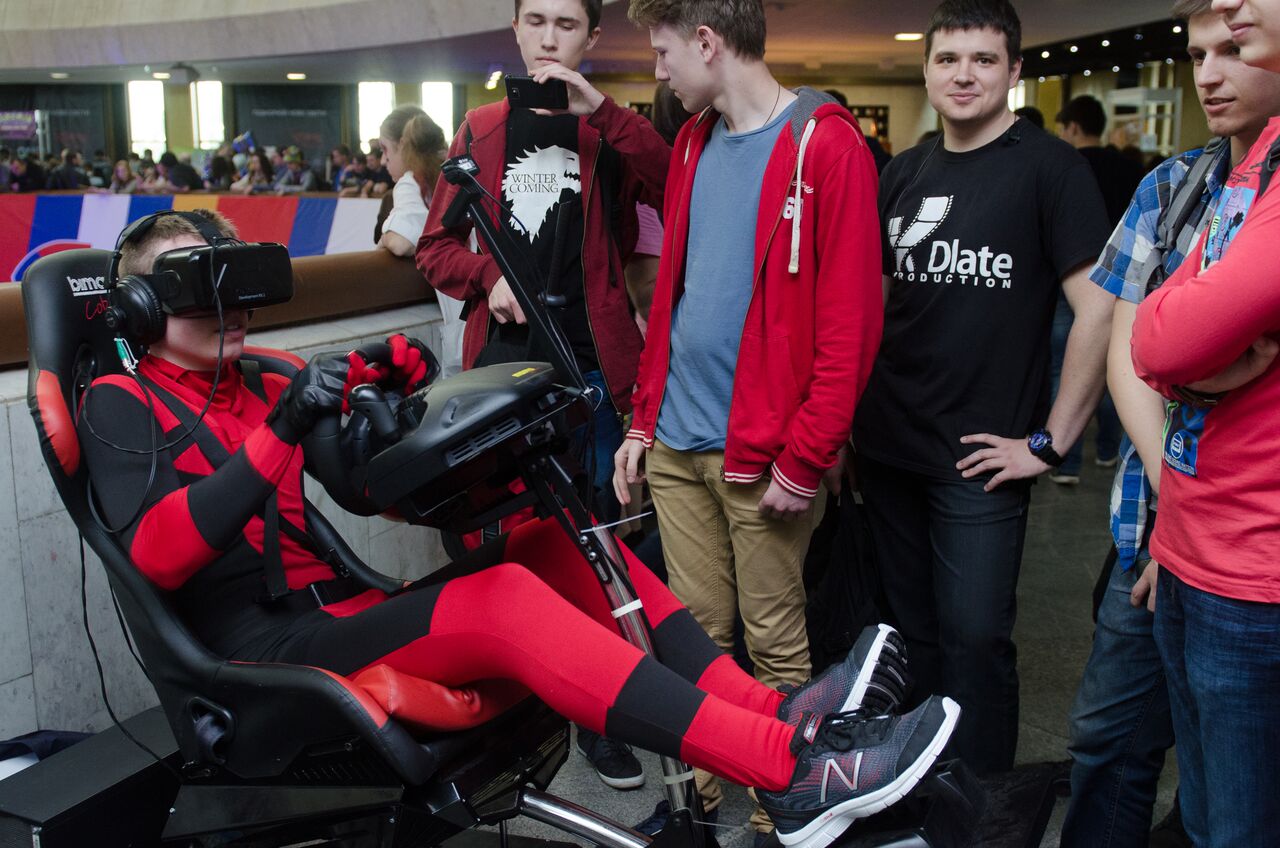 Seriously though, the motion seat is very well-priced, but I wonder about its durability with everything hanging off a single pivot-point like that.
Razor1373

i Didn't saw that photo. FABULOUS!

Im more interested in the wheel, so don't know much about their motion seat. I saw video with it (tested on LFS

) and theres no fireworks, but for that price, it is still real good. The question is durability as you said. But when it comes to their wheel, we can be like 90% sure it will be durable, since it's same servo motor used in OSW, and we know OSW is durable.

PS. heres the video i talked about, and also their fb fanpage, but it isn't happening much there: https://www.facebook.com/feelvr/videos/182188915491488/
also here you have second video:
https://www.youtube.com/watch?v=jdFru6jsSO4
(you might want to watch this more because SEXY WOMEN

UPDATE
Just wanted to update this topic, since it looks like something is happening.
-they will probably set kickstarter founding
-they plan to start collecting preorders in january 2018, shippings are planned for may 2018
-beside wheel itself, they will be selling full metal construction pedals with loadcell, also two rims will be available for that wheel.

And now the best. They will be selling a bundle which contain complete wheel, both rims (regular one and F1 styled), and pedals (loadcell) for $770! Comparing it to other DD wheels it's bloody cheap, and you're getting great pedals and second rim for that price, ofc both rims have working buttons and paddles, which is really problematic e.g. in OSW from what i know. If someone think that's not enough, well they have special price offer for people that decide to preorder that bundle, and the price is... $388. $388 for legitimate DD wheel with full metal pedals with loadcell and 2 rims already with buttons and paddles. That's like 3x cheaper than OSW, and OSW you have to build yourself then you have huge problem with buttons, and don't have any pedals.
I know it might look like advertisement, but im just really hyped for that product, and i think that the price is just incredibly low, i will definitely preorder that wheel.

PS. I've just checked AccuForce DD wheel price, and it's $1 299.00, so it's like almost 2x more expensive than FeelVR retail price, and if you look and preorder price, its OVER THREE TIMES CHEAPER, plus you're getting extra rim and great pedals with loadcell, it's just insane. Just wanted to let you know, because it's great opportunity to have really top notch wheel for medium price.

EDIT
Forgot to mention that all of that info you can find on their website http://feelvr.game/. All expect the final price (non preorder), which i received via email after singing myself on preorder wishlist

Well now the price of 388$ is there in the website for all to see, no prices like 770$ at all.
Also you get a feeling that the price will at least stay on same level or even get lowered after the pre-order period.
Usually it is so that if you get a product from first production slot, you will get the early phase problems also. If you not desperately need a new wheel I would recommend to wait for first user feedback.
This is of course only my opinion, Sorry to Anici if I lowered the enthusiasm and hype you seem to have towards this product

Well im still enthusiastic. I know the price $770 because i received an email from them, and they wrote there that the retail price will be $770. $388 is only limited offer for the preorder. Even if it will turn out crap i still think it is well worth it. Like where will you get a DD wheel with loadcell pedals for $388, it is about same price as Thrustmaster T300 RS, there's no way thrustmaster will be better, and the pedals will definitely be hugely superior + clutch pedal. I think even if it will be a lot worse than other DD wheels, there's no way it would be worse than logitech/thrustmaster top wheels. Im ready to taking the risk, because im done with this market. All logitech wheels are outdated with the old gear driven ffb, thrustmaster suffers a lot from durability, fanatec prices are ridiculous, and if someone want truly top notch gear, then DD wheels are the only option, but it requires lots of money and knowledge. And then these guys showed up with cheap plug&play DD wheel, that most ppl can afford. What can i say, they just seem to fit in the gap.

If someone is interested, they launched kickstarter yesterday. The price went up, but it is still cheap compared to other DD wheels. Here's link: Kickstarter.

Some new facts that are known, and i didn't write them here yet:

2. Some youtube channels which review simracing gear, received the prototype version of the wheel to test. Links here:
Sim Racing Paddock
The Simpit

Basically if you don't want to watch those long videos:
-Wheel
it's pretty decent, strong, and really fast. Like really really fast. In fact The Simpit said that it's even too fast, and should be corrected via drivers. Both youtube guys said, that this wheel doesn't have proper driver yet. So their impression was, that the motor is really good and suitable for a simracing wheel. It's fast, responsive, and smooth, maybe even smoother than others DD wheels.
There are only 2 question marks.

First is: will the drivers be good. The Simpit pointed that wheel might be too fast and responsive, so might need some damping coded in drivers. Basically good software is required to utilize potential of that motor. If they will nail the drivers, then the wheel will be great, and totaly worth money. Seems like the hardware is right, potential is huge, just need proper software which isn't ready just yet.

Second is: durability. There were some issue during reviews, at least one wheel died when tested.
It's totaly fine, because it is just a prototype, so that kind of things are normal, but they need to resolve it, and i believe they can. There are also some minor issues such as not so sturdy mounting, but they already know that, and are working on this things.

-Pedals
Pedals looks even better than wheel. The guys that tested it didn't find any issue with pedals. They didn't failed, construction is very strong and full metal, loadcell brake is great, and the customization is insane. You can change anything you want: initial angle, end angle, force, preload, pad position (horizontal and vertical), pedal position, foot stand position.
It seem that pedals are ready to go, and don't require any additional work.
One small issue they find was with it's unique "mounting". The pedals have a special "clamp" for people that can't hardmount it, which you place under your wheelchair wheels, to keep the pedals in place.
one of the guy from youtube said it worked only to some extent.

after ~22h each offer will be $50 more expensive. The final prices (after release) you can check on kickstarter.

Now the word from me. It is some risk to take advantage of their early prices, as it always is on kickstarter. Also there's some risk that the wheel will not be that good, or might not be durable, althought seems that the pedals are almost risk-free, since it's almost certain they're really high quality, and also feels great. So the pedals right now might be really good deal. Proper full metal contruction, load cell brake, huge customization, for $149. And risk is rather low with that one. I'll probably pledge for the whole bundle offer, but im not sure yet. Anyway that's all, i hope someone will be interested in this, there's already huge interest in this product from simracing community. They reached their $60 000 goal in just 72 minutes.
Last edited by Razor1373, Wed, 11 Apr 2018 11:40.
Bila_KHS

I was close to buy, but i dont know how it Will be. Now managed to wait, even without low price afer promo, still Will be worth it if first reviews Will be okay
Razor1373

Quick update.
From the official info they gave earlier, and from what could be seen on kickstarter - the early bird offer (the cheapest) should be over. But i've checked and it seem like there's extra 48h, not sure though if it's mistake, or they added this extra time.

Im also glad to say that i've backed them for the full bundle option. Hoping to make some review in the end of 2018, or beginning of 2019