We are talking theory here, but i can sure find some dead baby pictures if thats your fetish.

The foetus inside the mother is merely a tumor that is depending on the mother to keep it there, by removing it you would kill it thats for sure.

Kinda like the people that die if you don't donate blood. You can but if you don't you are still not responsible for their death.

We are not debating about murder or manslaughter since those require physical force which abortions can be done without, instead we are debating wether the mother can be held accountable for removing a tumor from her body.
Racer X NZ

IMHO: Re abortion, It depends on the individual, for some it's wrong, so for them, they should never have one.
For others, it's ok so the facility should be there so it can happen.
It should be a matter of individual choice.

But, surely there's more to talk about regarding the topic than being fixated on this ?

After all, the US believe's that murdering anyone, including US citizen children is right, please justify that !
Although, why US citizenship should be so important regarding wheither or not the US has the right to murder does confuse me a bit ..............
Last edited by Racer X NZ, Sun, 11 Nov 2012 02:06.
Bmxtwins

I agree, we should not be allowed to murder children via abortion. Now if you try to strt amd argument when im agreeing with you im officially blocking you.
Yuri Laszlo

You're not agreeing. He defends the idea that every woman should be free to choose whether to abort or not. You defend the notion that that is a crime and should be prohibited for everyone.
Last edited by Yuri Laszlo, Sun, 11 Nov 2012 15:06.
Bmxtwins

I was answering this
flymike91

Colorado and Washington voted to legalize recreational marijuana use. Obama has chance to prove how liberal he really is. Now that some states have done it, hopefully a whole slew of them will come next.
Bmxtwins

If CT passes recreational marijuana I give up hope in my state.
flymike91

at least you won't have to give up dope.
amp88

Do you wish to give us any reasons for this viewpoint, or are you happy just to repeat it without any justification (as you seem to do with the vast majority of 'your' opinions)?
Crashgate3

The interesting thing about the Marajuana is the extent to which it's been legalised. Here it was declassified which just meant that if you were caught with a small amount then you'd not get prosecuted. The US states have gone 'full Amsterdam' with plans for licenced shops to sell it and licenced growers.

I can see the plus sides - it essentially puts the dealers out of business; it can be taxed; and it ensures that there's legal laws for quality control. I generally find pot-heads to be incredibly tedious people though but that's just me.

My immediate thought was "We now go to Asian repor ... ome A Flower Looks."

The same can of course be said of drunks.
Bmxtwins

My main reason is that as of now drinking and driving is bad enough, if we allow people to go to shops and get high, its simply going to be similar, they're going to drive high. And that's my main reason. Also children will turn into bums.
Crashgate3

It's not so much 'people who are high' that I find tedious, it's 'people who define themselves by the fact that they smoke a lot of pot', who wear HI-LARIOUS 'take me to your dealer' t-shirts and seem to talk about nothing else, high or otherwise.

That's something you don't generally get much of with drunks (although I agree, the people who DO do the equivalent with booze are also very tedious people).

Children will turn into bums? You really haven't a clue what you're talking about do you?
boothy

According to your post Ray, we already allow people to go to shops/pubs/club and get drunk, and then drive when drunk. Your post is more of an argument for prohibition of alcohol than why Marijuana should not be legalised.
Last edited by boothy, Mon, 12 Nov 2012 22:35.
flymike91

I have always been in favor of legalizing marijuana because it destroys the "gateway drug" argument. The main way that people switch from weed to harder drugs is because the drug dealer wants to sell them something more expensive and addictive. Without marijuana dealers, I hope that a lot of young suburban kids won't ever come into contact with hard drugs.

There is nothing about Marijuana that is worse than alcohol.
amp88

There should already be laws against drug driving (on marijuana as well as other drugs which may impair driving ability). The issue with people driving while impaired (on alcohol, recreational drugs or other medication) is surely about enforcement. If there were to be an increase in the number of drivers who drove stoned (and I would agree with you that this may occur, at least in a small number of cases), do you really think that's enough of a reason to keep marijuana illegal? If we were to follow your logic to its conclusion we could draw the same parallels for many other cases.

For example, there are tens of thousands of gun-related deaths in the US every year. Should they all be banned from public sale? There are thousands of deaths each year from prescription medications such as aspirin and paracetamol. Should these be banned because they cause deaths? According to this Washington Post article on a National Safety Council study 28% of traffic accidents in the US happened while drivers were using mobile (cell) phones. Should they be banned from sale?
flymike91

DUI with marijuana is hard to prove because of how long it stays in your system, but there are tickets you can get for driving erratically, below the speed limit, etc. that are quite expensive by themselves and easier for the state to collect than a DUI ticket which requires you to go to court.
edge3147

I agree with amp, you need to explain.

Here is my explanation of my support for legalization.

It's no worse than Alcohol and Tobacco. Both are addictive and can require some sort of treatment to stop then if you become addicted.

With moderation it is the same as wanting to have a drink or two.

Cigarettes are just bad for you, and if you choose to kill yourself and cost thousands in medical bills and such then go for it, it's one of the joys having the freedom to do that. Except you can't with marijuana because our govt. still thinks prohibition is working and helping the problem when it really isn't doing anything to help at all.

Prohibition never works in these cases and the sooner this silly prohibition is ended, the hemp industry can come and help stem a few other problems we are having as well such as renewable fuels and other quite miraculous products. Hemp has an almost endless way to use it.
edge3147

Children already have access to it by middle school according to a few surveys(not saying they aren't biased but i'd believe it given my own experiences with school). Prohibitions sends it underground instead of a regulated and taxed environment like cigarettes and liquor.

Please carry on with your conversation but with reference to massive voting fraud in the US, previously I highlited the Republicans efforts, well, looks like the Democrates do it too.

Swing state of Ohio, track record for voting fraud,
" However, there are more than 100 precincts in Cuyahoga County where the voting results can only be described as truly bizarre. Yes, we always knew that urban areas would lean very heavily toward Obama, but are we actually expected to believe that Obama got over 99% of the votes in those areas? In more than 50 different precincts, Romney received 2 votes or less. Considering how important the swing state of Ohio was to the national election, one would think that such improbable results would get the attention of somebody out there. Could we be looking at evidence of election fraud hidden in plain sight?
Perhaps if there were just one or two precincts where Obama got more than 99% of the vote we could dismiss the results as “statistical anomalies” and ignore them.
But there were more than 100 precincts where this happened in the most important swing state in the nation.
Maybe there is some rational explanation for the numbers that you are about to see. If there is, I would really love to hear it."
http://fromthetrenchesworldrep ... 100-ohio-precincts/25662/

But back on 'legalisation', you have an endless war on drugs,(well, only on those that aren't dealt by parts of your establishment), you have a prison system that requires prisoners, the fed's will just crack down on it. Read this NY Times story and see what the US does, Legal, medical weed, licensed etc, facing 80 years in jail.
WTF America ?
"And federal drug laws are unjustifiably extreme. Consider the case of Chris Williams, the subject of this Op-Doc video, who opened a marijuana grow house in Montana after the state legalized medical cannabis. Mr. Williams was eventually arrested by federal agents despite Montana’s medical marijuana law, and he may spend the rest of his life behind bars. While Jerry Sandusky got a 30-year minimum sentence for raping young boys, Mr. Williams is looking at a mandatory minimum of more than 80 years for marijuana charges and for possessing firearms during a drug-trafficking offense."
http://www.nytimes.com/2012/11 ... ml?smid=fb-share&_r=0

"Only one dealer in this town, and we'll protect our turf !"

http://www.youtube.com/watch?v=HNqIrDKnNE8
"The Taliban's top drug official in Nangarhar, Mullah Amir Mohammed Haqqani, said the ban would remain regardless of whether the Taliban received aid or international recognition. "It is our decree that there will be no poppy cultivation. It is banned forever in this country," he said. "Whether we get assistance or not, poppy growing will never be allowed again in our country." 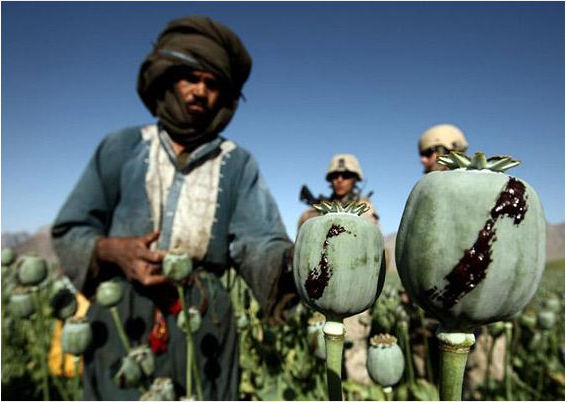 And FYI, dated 2001 pre invasion.
The first American narcotics experts to go to Afghanistan under Taliban rule have concluded that the movement's ban on opium-poppy cultivation appears to have wiped out the world's largest crop in less than a year, officials said today.

The American findings confirm earlier reports from the United Nations drug control program that Afghanistan, which supplied about three-quarters of the world's opium and most of the heroin reaching Europe, had ended poppy planting in one season.
http://www.nytimes.com/2001/05 ... success-us-aides-say.html

"Opium production will rise across Afghanistan in 2012, spreading to more parts of the country than it has in the last few years, according to a new annual assessment [PDF] from the United Nation’s Office on Drugs and Crime (UNODC).

The report found that this year, only 15 provinces will be free from poppy production – down from 20 provinces in 2009 and 2010 — and indicated a ”strong association between insecurity, lack of agricultural assistance and opium cultivation.”

Traditionally, UNODC’s assessments are issued with a press release, but as The Guardian notes, this year’s was published on the UNODC’s website with no publicity."
http://www.pbs.org/wgbh/pages/ ... m-production-on-the-rise/
Last edited by Racer X NZ, Tue, 13 Nov 2012 00:40.
Hyperactive

Here's a good one, if they can't stop laughing at this then they should be locked up for the good of the state !

I think we should sell them to Mexico. At least Mexico could have its own GP again.