The time has come for the long anticipated 2023 edition of the Sim Broadcasts Soccar Cup!

The tournament will take place over two days: Saturday 28th and Sunday 29th January 2023. Day one will consist of a qualifying tournament to determine the best 8 teams, who will progress to day two to compete for Soccar Cup glory! Sunday’s tournament will be streamed live by Sim Broadcasts:

Event news and updates will be posted in this LFS forum area, as well as on our official tournament Discord server.

The event will take place at the Sim Broadcasts Stadium and will use the [TC] Gaming Football InSim. We will be using the Football and XF GT Electric mods.The exact format of the qualification tournament is yet to be determined and will be based on the number of the teams that register.

The reigning champions of the Soccar Cup have an automatic qualification to Sunday’s tournament, should they wish to enter. If not, there will be one extra qualifying slot available.

Qualifying games will consist of two halves, each of them 3 minutes long.

The main tournament on Sunday will be played out as a knockout tournament, consisting of quarter-finals, semi-finals, a third-place playoff (consisting of the two losing teams from the semi-finals), and the grand final match. The quarter-finals, semi-finals and third-place playoff will consist of two halves, each 5 minutes long. The final will consist of 6 minute halves. If a winner is not decided after full time in each game, an overtime match, with 3 minute halves is played to determine the winner of the game. If there is no winner after the 6 minute overtime, we will play for a golden goal. 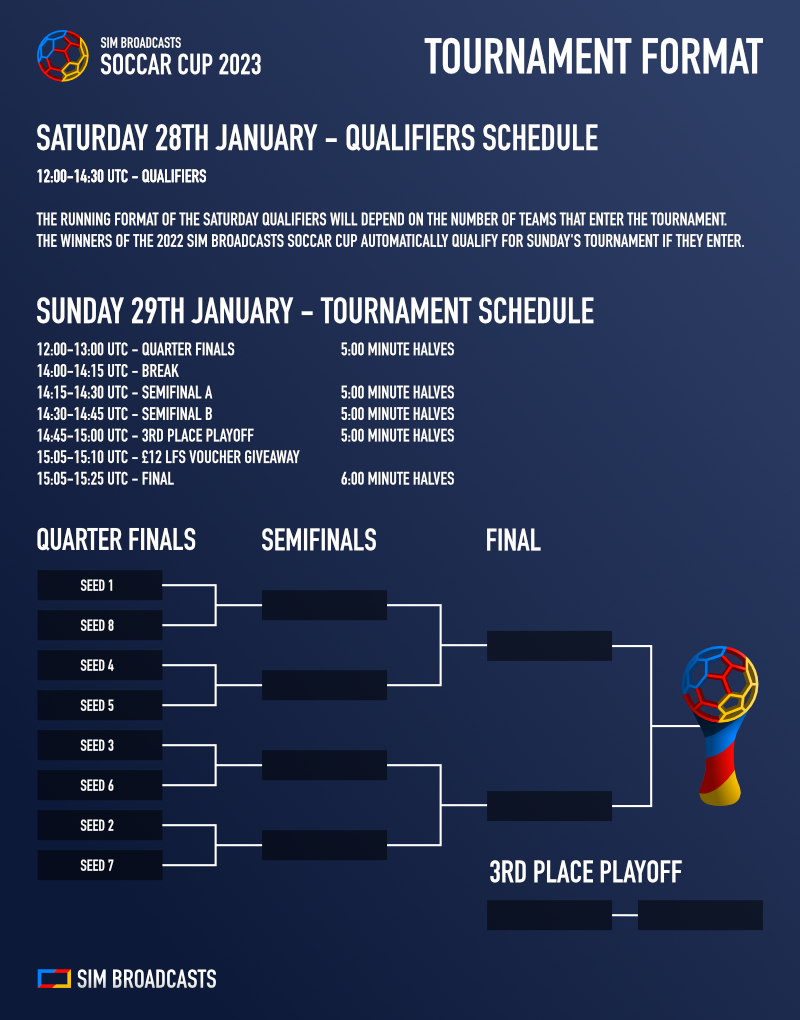 For the 2023 tournament, you and your team have the option to fully customise your team identity. If you choose not to create your own team identity, the tournament organisers will assign one to you.

Teams customising their own identities will choose one colour for their “home” kit, and one colour for their “away” kit. They will use these colours in the qualifying tournament and during the main tournament if they qualify. These colours must be the base-colours of the liveries the team will use for the tournament. Different shades are permitted as long as it remains obvious which colour the team is representing. Available colours are:If you submit custom kits, you must use the templates attached (sbtvsc23-templates.zip). Kits should be submitted in the custom kit submission thread at least 24 hours before the start of the tournament.

Teams who choose not to customise their team kits can use skins from the skinpack that will be provided ahead of qualifying.

Teams can provide a logo in PNG format that must be at least 512px*512px in diameter. The logo can be placed on team kits and will be displayed on the broadcast graphics.

The name format for the event is as follows:

"[X] Name" where X is the colour of your team from the above list. For example, for the red team: [R] Name (^1[R] ^7Name). You will be instructed whether to play in your home or away colours before your match begins.

If you are registering an entire team or a partial team that is accepting entries on a first-come, first-serve basis, please use the following template:

This event is organized by Sim Broadcasts. By registering a team or signing up as an individual, you are responsible for your own participation and the participation of those in your team. Failure to attend after registering could result in your team being disallowed entry into future tournaments. Ensure that your entry is kept up to date and all changes to your team line-up are noted in a new post as well as your original post.

Default liveries for teams not submitting kits are now available to download: https://www.lfs.net/attachment/429617

These skins have already been uploaded to LFS World so there is no need for you to upload them yourselves.
Kid222

Sign-ups are now closed! See you in qualifying tomorrow!

For those interested, check Soccar discord, there will be friendlies played tonight, so book your game slot early!
Kid222

Group games will be played in alternation and are scored as follows:

In case of a tie on points after the group stage, the following tie-breakers will be used:

Seeding/elimination games will consist of two halves, each of them 3 minutes long. If there is no winner after standard time, an extra time of 3 minutes will be added, until a winner is decided. Golden goal rule will apply.

Server info with password will be sent later today.