2 years have been completed racing short tracks and this summer it's time for the 3rd try - competition so far has not been very strong,so this year league returns shortened and with some changes to hopefully improve the competition,while small prize money will be awarded to the best racers this season. The car for STARL will stay the same again - it's the front engined rear wheel drive XRT,delivering 247 horsepower from it's 2 liter turbocharged engine,while car's dry weight is just over 1200kg. XRT will stay as STARL official car as long as there is other car added to LFS lineup deemed to suit better for format of this league.

Changes this season will include departure of the most criticized (and ironically also league's most attended) round Dusty 300. Instead the shortened 3 round season will have two returning tracks and one brand new. Nominal distance of races has been reduced from 150 to 100 kilometers,reducing the race time below one hour. Season will kick off in South City,racing it's Sprint 1 configuration,which is also the longest circuit of the season with length just over 2 kilometers. STARL will use an open configuration solution for better pitlane and usage of South City's original garage area. 2nd round will visit the slowest course of the season - Lake Extended configuration run in reversed direction,this Rockingham configuration should be well known for RTFR regulars,but also they will have to adapt for racing in other direction. Season finale will be held at Aston,using the same configuration as last year - South. The course features two different tightening 180° turns and a chicane,which should be a great place for championship decisions as turn one of the track allows multiple fast lines through it.

STARL will be run in the same time as both last years - sunday evenings 19:30 CET / 17:30 UTC. Racelenght will variate between 45 and 55 minutes due different track average speed - the tight circuit of Rockingham is by far the slowest and will require few minutes under one hour to complete 100 kilometer distance.

* Layouts available as links/attachments
Each round will have a specific info and discussions thread in this forum section with all information of the round!

Special notes on qualifying:
* If there are not enough drivers to fill the max allowed grid (40 cars),Drivers Championship top 10 drivers will be allowed to start from end of the grid if came late and missed qualifying - noone else will be allowed to start without qualifying. In round 1 this top 10 will be taken from last year's standings.
* To qualify for the race drivers have to set a laptime during qualifying session within 112% of best laptime of the qualifying session. This does not affect championship's top 10 drivers as they may start the race without qualifying or with laptime outside 112% of best laptime.

Championship bonus points:
Attendance in all 3 rounds - 2 points
Attendance in 2 rounds - 1 point
* Attendance counts if a driver has started the race (crossed the start/finish line on own power)


Signing up:
In order to compete in STARL 2021,you have to visit STARL 2021 Signups thread and fill the registration form.


Miscellaneous info:
We will not use any numbers,skin requirements or official names in our league.
Sign-up tracking and all the standings will be found in STARL 2021 spreadsheet.
Signed-up drivers will receive server information and password at least 24h before round start (usually in saturday European time) via PM on this forum! Make sure you have enabled PM receiving! Server will be online without password until then.
Series will be run using the latest stable version of LFS (currently 0.6V).
All information above can be changed,if so,there will be a notification posted about it!


Join us,good luck in series and have fun!
Eclipsed 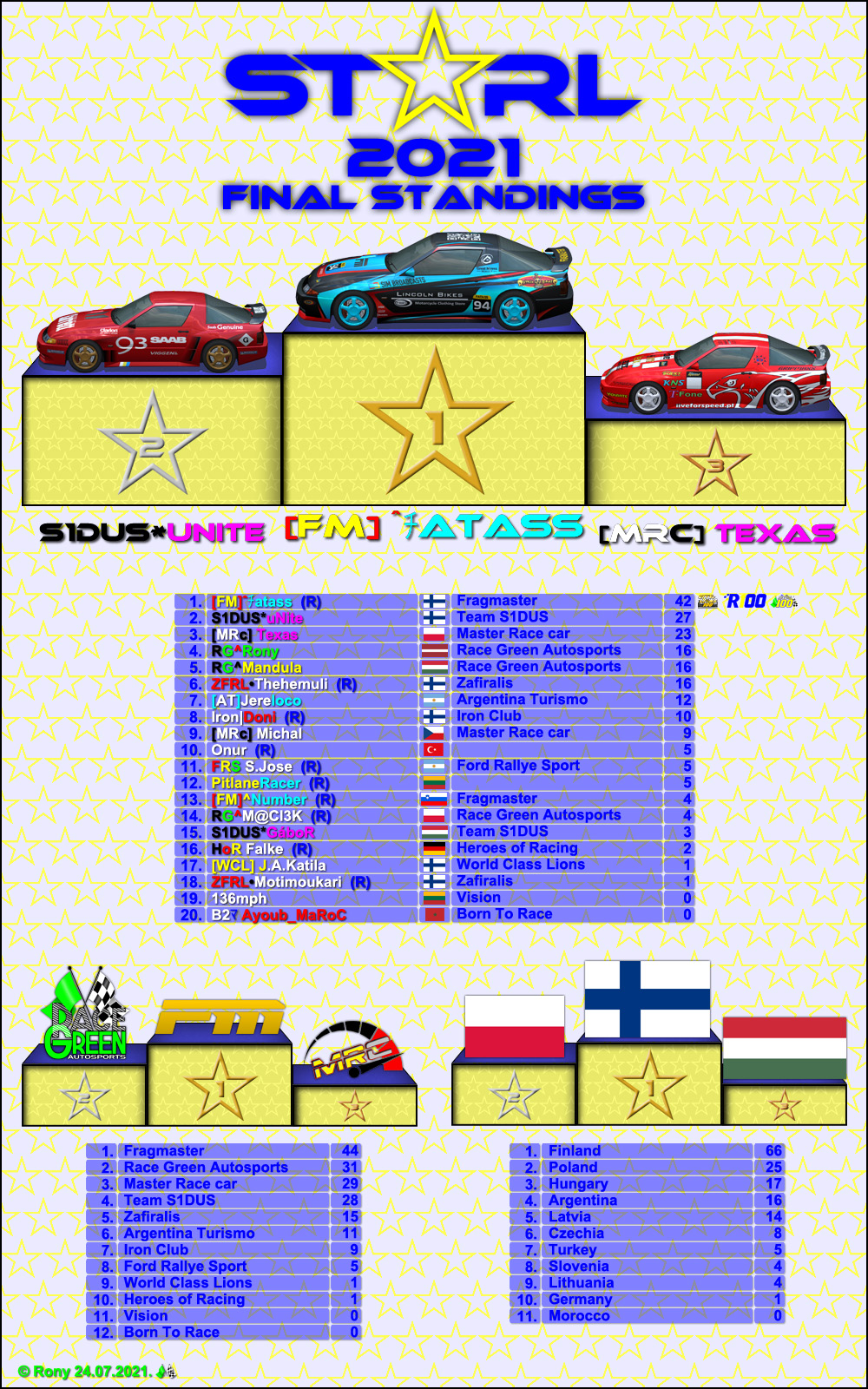 The 3rd season of STARL was relatively spontaniously organized and featured a shortened format in both season length and race length,which made the series a tick more atractive for more casual racers. Round one set a new series attendance record of 17 and no rounds were shortened due low attendance,which was the case at least once in previous 2 seasons. This season had 26 signups (4 more than last year and 4 less than in inaugural season) and 20 actual participants (repeated series record,2 more than last year). 18 drivers finished in at least 1 round,6 drivers started and finished in all 3 rounds. If last year each of the 6 rounds featured 6 different winners,this year all 3 races were won by same driver.

STARL 2021 Drivers Champion: [FM]ˆﾁatass
Fatass joined the series for the first time and started winning right away which never stopped through all three rounds,not leaving any chances for competition alive. The finnish series rookie did not score just 2 points from all possible as he did not claim any bonus points from round one.
The series champion of the inaugural 2019 season Unite finished 2nd this season,which is his 3rd different overall season podium in 3 seasons. Unite qualified 2nd in each round,finished in same position just once,adding 2 other top5 finishes through the season. Texas joined STARL right in it's inaugural championship race,but never joined a single round since,until start of this season though. The pole started the season with mere 8th place finish,but scored 2 different podium finishes in other 2 rounds,clinching 3rd position in overall standings.
The defending champion Rony just had a single decent finish - he finished 2nd in season finale,advancing himself to 4th place in final standings (repeating 1st season effort),his teammate Mandula started the season with 3rd place finish,but struggled through other 2 rounds and ended up 5th in standings - 4 places better than in 1st season.

STARL 2021 Rookie of the Year: [FM]ˆﾁatass
Fatass is no rookie in simracing,but technically is a rookie in this series,therefor earns also this award,which he secured already after 2nd of 3 rounds. Also both 2 other best rookies come from Finland - Thehemuli finished 2nd in race for this award,Doni - 3rd. Last season's best rookie Trespasser did not join the series this year.

STARL 2021 Nations Cup winners: Finland
Another dominating season by finns this year - they scored 22 points from 24 possible in each of the 3 season rounds,clinching the title after 2/3 of the season - 3rd STARL nations title for the nordic nation. Poland was represented only in inaugural season,where they were classified 13th,this season they raised the performance and finished 2nd in standings. Also the 3rd best nation returned in STARL after one year absence - the 2019 season's 7th best nation Hungary finished 3rd this year.

Slight increase in racers activity and competition makes the future of league a little brighter - if nothing drastic changes in wrong direction,STARL should return for it's 4th season around may of 2022,most likely in same format as this year,offering racing on sub-minute racetracks using the same car.

Race Green Events thanks all participants and wishes much success in all other leagues and events they are taking part. Prizewinners will receive PM here in this website during nearest days! Regarding our plans,there are no real changes of them - in august there will be announcement about V8 Racing League season of 2021,but at the end of the year in the traditional date we'll host the famous X-mas derby,which name is not even needed to announce anymore. There is an alive idea of another single event in this year,but currently time will tell if it ever realizes in our virtual world. Besides that tuesdays are still action packed with the simple format fun race RTFR and the longer version with XL to it's name,this year being even broadcasted through whole year!