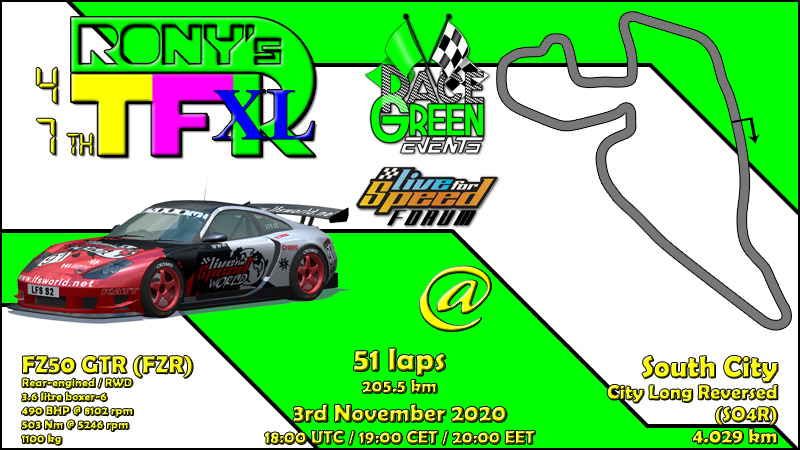 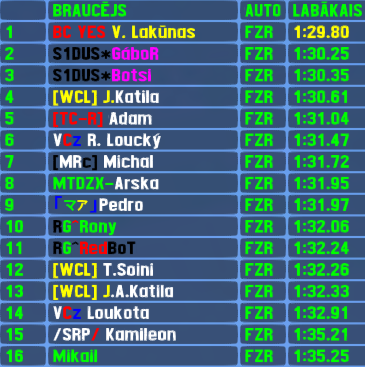 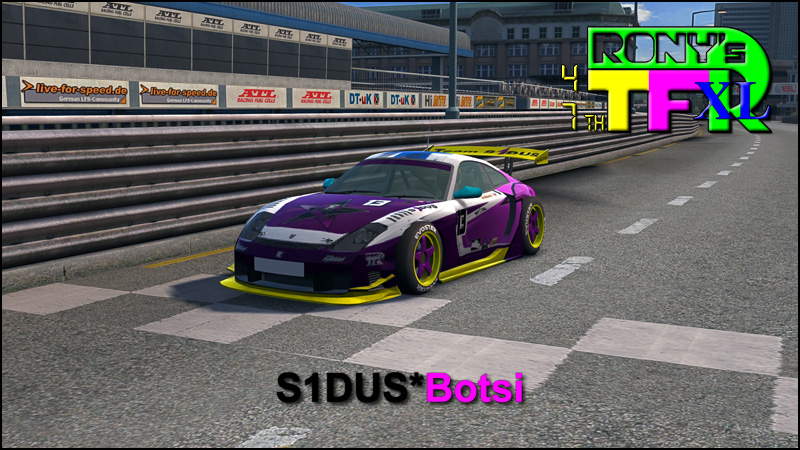 The extended repeat of 234th RTFR was less attended than the shorter race and atrition rate was very high in top positions - only one of top5 qualifyers did not retire before reaching 1/4 of the race distance. That of course promoted others to higher positions than expected as noone else besides 4 drivers of top5 qualifyers retired.

V.Lakūnas was the fastest in qualifying by a noticable margin and earned himself the 2nd pole position in RTFR XL,he led first 7 laps before being passed,run another 4 laps and retired,giving up the chance for 2nd win. Botsi started the race just from 2nd row,but after taking lead in lap 8,never gave up it to take his 11th RTFR XL race win,setting his 10th fastest lap on the way,earning also his 15th top5 finish. Rony finished 2nd to repeat his best RTFR XL finishing position and earned the rights to pick combo for the final race of this year,22nd top5 finish in organizer's account. Also 3rd place finisher Arska repeated his best result and added 4th top5 finish to his achievements,previous race winner Redbot finished 4th,also for him it was 4th top5 finish,current rating and standings leader Michal rounded up the top5 with his 6th entry there - he will lose his lead in both charts though.

* FUN FACT OF THE MONTH :
This was 10th RTFR XL race at South City and half of them have been won by a single driver - Botsi. This means Botsi in South City alone is more successful than anyone else overall.

* CLOCK PITTER OF THE RACE :
FZR does not have fuel tanks big enough to carry the car for RTFR XL race distance with full pace,neither anyone tried to stretch the tyres for distance,so the shortest pitstop featured refuelling and tyre change and was 16.87 seconds long,made by 3rd place finisher Arska.

* FIELD RUSHER OF THE RACE :
Starting 9th and finishing 2nd makes a +7 positions gain during the race - Rony's gain was 1 position better than his teammate's effort.

* HONORABLE MENTION :
Mikail has experience of 3 normal RTFR race distances,this was his 1st ever try at the XL distance. Despite lack of pace and being last in results,he carried on to finish the race - still a better result than the result of some faster drivers,who quit due running in few problems or when realizing they can't win.


In the 1st december RTFR XL will reach it's yearly finale - the 12th and final race in the year will decide the tight yearly standings. The combo has been chosen - the 48th RTFR XL will be run on the least popular environment (besides proper configuration free Autocross) Rockingham - it will be a LX6 race at Rockingham ISSC Long,featuring a 49 lap run for the glory. After that RTFR XL will take 8 weeks break before starting 2021 season. But already next week normal RTFR will return and will feature one of the street legal cars,more info in sunday. Talking about sunday - this sunday 2020 season of VERL will finish in Fern Bay - there is still a chance to "catch the train" as signups are still open - more info in VERL forum section!
Mizil

Thanks Eclipsed!
This was my first race ever