For racers who have a Direct Drive wheel, Test Patch U7 has some new settings that allow you to remove a notchy force feeling and receive force updates with the minimum delay. And there is no longer a reason to use frame rates above 100 fps.

For OSW wheels the recommended settings are:

I am interested to know if these are the best settings for all direct drive wheels. And to allow for the possibility of automatic presets, it would be useful to know the exact name of your wheel as it appears in LFS (see attached screen shot).

The update does allow better settings for ordinary geared wheels too, but it is not recommended to go for the maximum. The default settings (Steps 400 Steps / Rate 50 Hz) may be all you need.
tmanning47

I just got an ACCUFORCE, I will try this out later today.
F.C.Barcelona 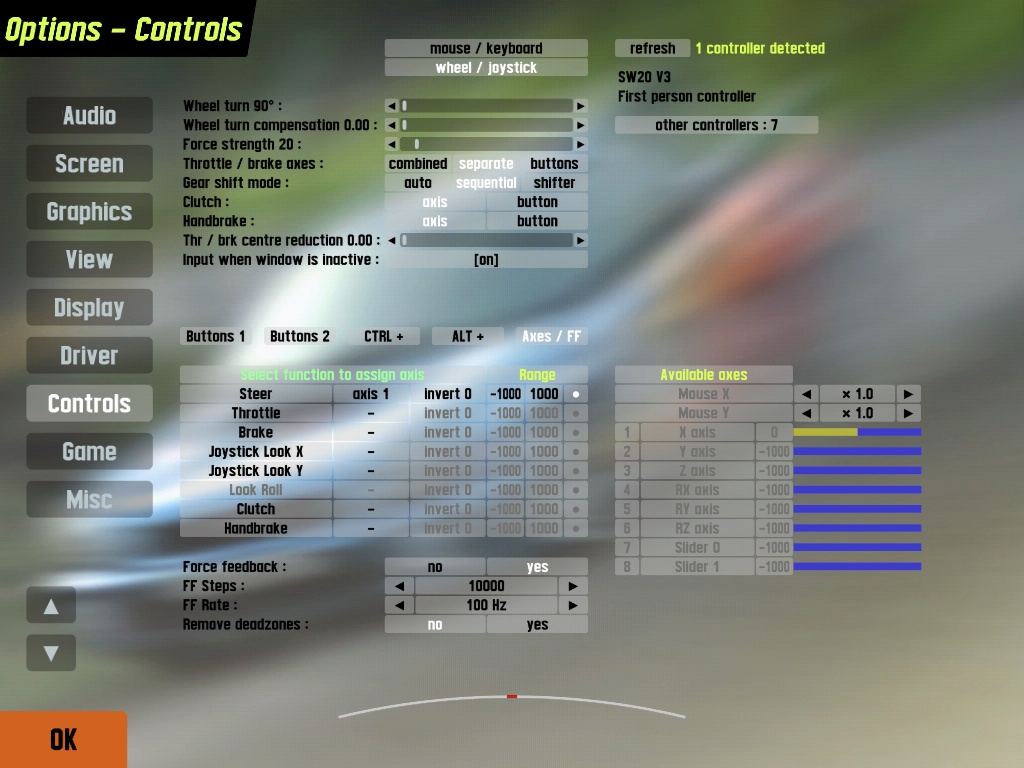 U defaulted to 256 steps, and an update rate that was based on fps. So you'd have to use around there for a similar feel. I do find it interesting that scawen didn't include the original default, though there's not much point.

Most direct drives should be called "SimuCUBE" as that's the most used solution. I think the newer one would be called SimuCUBE 2, but I don't have one yet.
super_gt

@Scawen what settings you recommend for CSL Elite Wheel Base V1.1?
Tomislav531

With my dfgt change is there but it isnt much. All I can say is ffb is now less "lazier" then it was before.
sweetreid

This is excellent. With .6T it would get a notchy feeling with the forces turned up in particular. The dynamics felt a bit subdued as well.

This patch improves the feeling significantly. Smooth, dynamic, responsive, all the good stuff. You can feel the rear of the car coming around quite well now.

Using the max FFB rate and number of steps should be the default for all DD wheels imo. Some of the high powered Fanatec non-DD wheels might benefit as well.

I think the max FFB rate should either help, or not hurt pretty much every wheel out there.

Mine is named 'SW10 Compact+', as a first person controller. Any time you see 'SW#' it's more than likely a Sim-plicity DD wheel.
SimulatorRental.com

Scawen, while you are messing with the wheel settings...

In the menu where you choose a controller.
How difficult would it be to make it so you just press any button on the wheel, and it automatically picks that wheel?

Only asking, because every time I setup my trailer, I still have to go though one seat at a time, and pick the wheel. It does remember the settings once I do this though, but when I tear it all down, it often gets it wrong when I put it all back together again, even if I manage to plug it all into the same cable/port. If I pick the wrong wheel, or one that was already picked, it disables force feedback on some of the wheels, so its a pain when I mess it up.

-hoping to get enough funds soon, to run each seat on its own PC, but currently have 0$ in the bank, so that will be a while.

-had a few strange black screen instances again (in the version prior to the FF test patch). The instances of LFS seem to have randomized what screen they were on after it recovered. Nothing was in the log....

-also I added 2 more monitors, one is now the host, the other just extra spectator. These screens seem to randomly bring up the virtual keyboard, and or other menu inputs... cannot figure out why, assumed one of the wheels had backspace mapped to a button, but they do not.

- will be setting up the trailer again on the 27th, pending weather.
luchian

This is what works for me: