Quite honestly this game needs a new website. It's terribly outdated and nearly impossible to use on mobile. I don't know what the forum is currently, but something like Xenforo or MyBB would provide a better experience for the users in my opinion.

At the very least the site is in desperate need of a mobile interface.
lucaf

Yea that would be nice.
TechEdison

gonna keep this at the top because honestly it's way overdue.
mbutcher

The LFS website and forum were only updated a couple of years ago. The LFS forum used to use vBulletin but Victor and the team decided to do away with it and rolled out their own forum which has simplified the experience at the expense of a few fancy (essentially unnecessary) features.

To say that updates to the forum and website are 'overdue' is daft, both are still fit for purpose. That said, I wouldn't be against a mobile site though, at least for the forum. It shouldn't be too hard to throw in a few media queries to make the forum more user friendly on mobile.
Last edited by mbutcher, Wed, 12 Sep 2018 07:49.
Racon

Joined : Mon, 25 Dec 2006 11:53
Posts : 974
Online at :
PiranMOTODebug
The forum fitting perfectly on a phone would be great, but it's been mentioned many times already. It's already usable in landscape with a bit of zoom/scroll fiddling. Not perfect, but my test is if it's less ball-ache than using a phone's touch keyboard to type, and it passes that easily.

Other than that, what is it that you want to see? I'm struggling to think of something useful that isn't already here, or on LFSWorld. Maybe a tap into the lobby? Some little "10 people are ready to race" counter on the website, so that you don't have to fire LFS up to check, so that people can check more often and end up with more hits. I dunno, does anyone use the lobby? I just race by myself until someone joins, I ain't spendin' no racin' time waitin'

Liking posts/people is nice but, counter-intuitively, keeping scores tends to lower the bar on post quality when people get caught up in trying to 'win' the forum. Any old crap is worth posting if you're jonesing for some internet points, apparently

PS: Pre-made forums are shockingly bad under the hood, BTW. I'm sure they've changed it since (because they haven't disappeared), but last I looked vBulletin was using eval() to do some things. Eval!? There are no family-friendly words that can define that decision accurately.

You don't need to build a complete new website for it to be responsive. Switching over to another platform won't magically fix that. It's like switching to DX12 won't magically make your graphics nicer.

Anyway, making the forum and site responsive should be an easy task to do. It's 2018 etc.
nikopdr

Funny enough, this feature was implemented when the forums were still on vBulletin, but due to the nature of abuse it had, it was removed.
TechEdison

It's not really more features that are needed, but just a more modern and eye catching design in general. It all just seems a bit outdated.

That said, I could probably figure out some custom CSS rules that would solve the mobile issue! Maybe they will get used who knows.
TechEdison

Mocked up a rough style that works on mobile devices. It fixes the top navbar icons (notifications, user profile, etc) not being visible. It allows everything to fill the entire page (instead of the min-width max-width method it used before) and a bunch of the buttons are larger and easier to press.

Not tested on a mobile device yet but I will momentarily. Screenshots attached.
TechEdison

Tested on android using Firefox. It could be better but it's a start. At least I can access everything on the website without having to zoom in/out.
Last edited by TechEdison, Thu, 13 Sep 2018 21:06.
Racon

Maybe we could get the web dev to take a look at this thread? :o
TechEdison

Update: safari mobile doesn’t seem to support userstyles. Getting this natively implemented would be nice.
THE WIZARD DK

im just thinking. why is it important to use your phone ?
do you drive lfs on your phone too ?

if so i could perhaps maybe a little bit get a feel around why you suggest it.
but if not. then i dont get it.

I follow the forum on mobile too...
THE WIZARD DK

to be perfectly honest here.

i dont think "like" buttons is a good thing. then people soon would want a "dislike" button or something else..

lets face it. this is NOT facebook and to be honest again.

on platforms like facebook. it creates more harrassment and doubt than good is.
and example is the danish prime minister ,who stated in ,i think 2016, that facebook likes count as a vote...

it would only create more doubtful behaviors than we already seen here.

mostly because people would then surfe for likes and therefore content would not be honest because of the way people think these days. namely that likes or dislikes is a good thing. it only creates more chaotic non see through content that most likely will turn into a battle.
which i dont think devs is interested in.
as being a forum.
you can easily write with 10.000 characters how much you "like" someones post or comment here with a quote. (i tried to max out posts,it does work).

this is a FORUM. not a social network.
i dont think a option like that would be healthy in the long run for LFS forum to have.

most likely would also create groups of people who would mis use this option in order to pin down others or rule them out of lfs community.

in short.
wont be healthy for lfs in any way as i see it.

EDIT: what i do agree on is lfs website could run smoother than it is now. but thats about it.
all that other stuff. would just be a drag(not the racing) for LFS devs and mods.
Last edited by THE WIZARD DK, Fri, 26 Oct 2018 02:56.
TechEdison

I think you missed the point of this thread. Main issue is that it’s 100% NOT mobile friendly and looks rather outdated in general.
THE WIZARD DK

compared to the old forums. this looks pretty pro to me. but what do i know.

and again. i actually think there once was a suggestion about mobile app.
not exactly sure who or when . but obviously theres a reason its not here.

but i do agree it could run a bit smoother than it is now. but i also know Victor is aware of this or maybe it was Scawen. anyhuw. the devs know. i think victor said he look into it more after the updates.

are you sure youre not one of those with updates to your phone that actually slows it down ?

(thats a debate on some news sites atm).
TechEdison

Again you’re missing the point. This is nothing to do about the speed of devices. It’s that

1: it looks way outdated to begin with
2: it doesn’t function on mobile at all because it’s not responsive.

See one of my earlier posts where I literally wrote code to fix the forums for mobile. I am also web developer.
THE WIZARD DK

yer i miss all your points. there. nothing more to add. 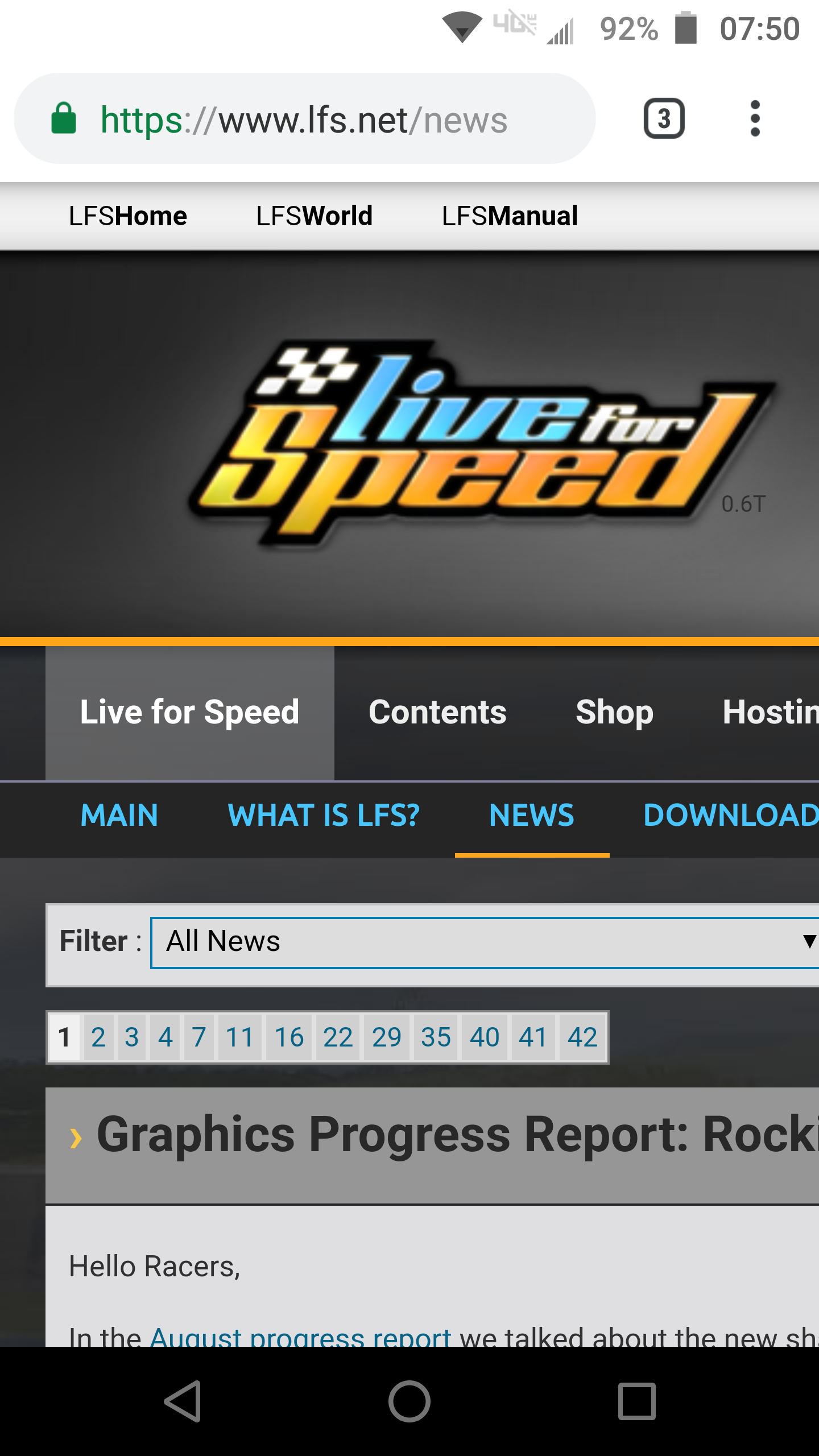 and half the internet is on phoon nowadays .. it's about 50-50 with tendency of mobile devices to start to be even more dominant.

if you want to hype your product with some update you need to have a website which is readable for all people BEFORE a hype.

imagine what happens when i receive twitter message or facebook message on my phoon about some lfs news. i click on it with phoon, get confronted with this website .. will i read? no.. bye interest.

Viktor should get lesson in responsive webdesign. css screen media tag is amazing. and simple.
The_Great

oh and this one is handy too http://mobiledetect.net/