Each driver will have a maximum of two attempts to achieve the fastest possible lap time. Each attempt is charged once the driver has left the speed-restricted part of pit lane. It is not permitted to do both attempts right after each other, you must jump to the pits or spectate after completing your first timed lap. When leaving pit lane, all drivers are asked to keep as far left as possible and also to not cross the pit exit blend line. Since time and track position will be a bit tight with this duration of qualifying, we expect everyone to behave and not trip over each other. All drivers are asked to leave adequate gaps to those in front of them before going on a hot lap, it's within every drivers own responsibility to do so.

Should a driver receive a penalty during qualifying, receiving a DT for speeding in pit lane for example, he must serve that penalty as soon as possible! Penalties which aren't served will lead to the drive in question being moved to the back of the grid!

After the time has elapsed and the last attempt has been either completed or aborted, all drivers are asked to park there car in pit lane and to not enter the track itself!

Just like in the first ever CL event in the year 1831, there will be a laglap before the actual start of the race. Since Westhill is wider than most tracks are, it shouldn't be too much of a problem to navigate the first few turns safely. However, this doesn't mean that overly optimistic or poorly executed maneuvers are acceptable.

During the race, there will be two mandatory pit stops with a total minimum stationary time of 25 seconds across both. These pit stops can be made at any point during the race except for the last lap. Whether any work is done to the car during this stop, is up to the drivers.

It's amazing how well you can comment on your lap. If I was to do so, it would've been like "now turn left, now turn right, now brake..."

Hehe, my first few track presentations were pretty much like that. I kinda learnt how to improve the commentary week by week.
mbutcher 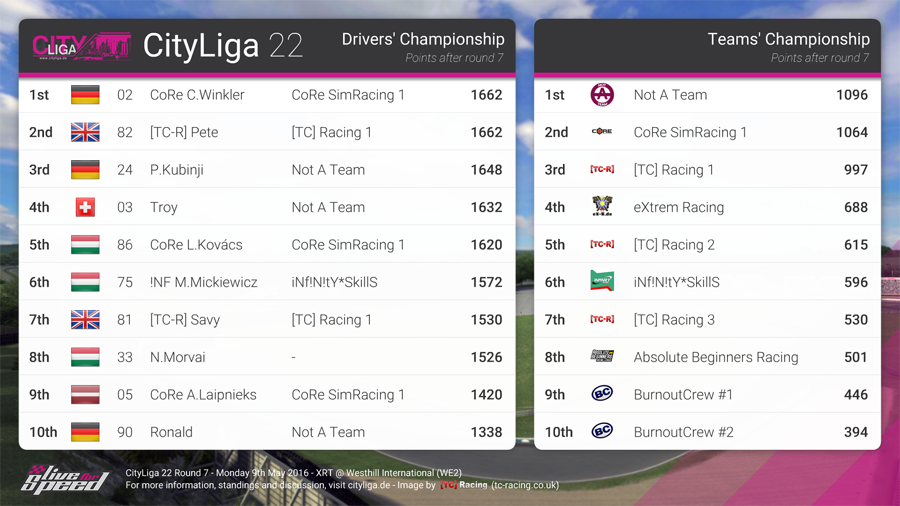