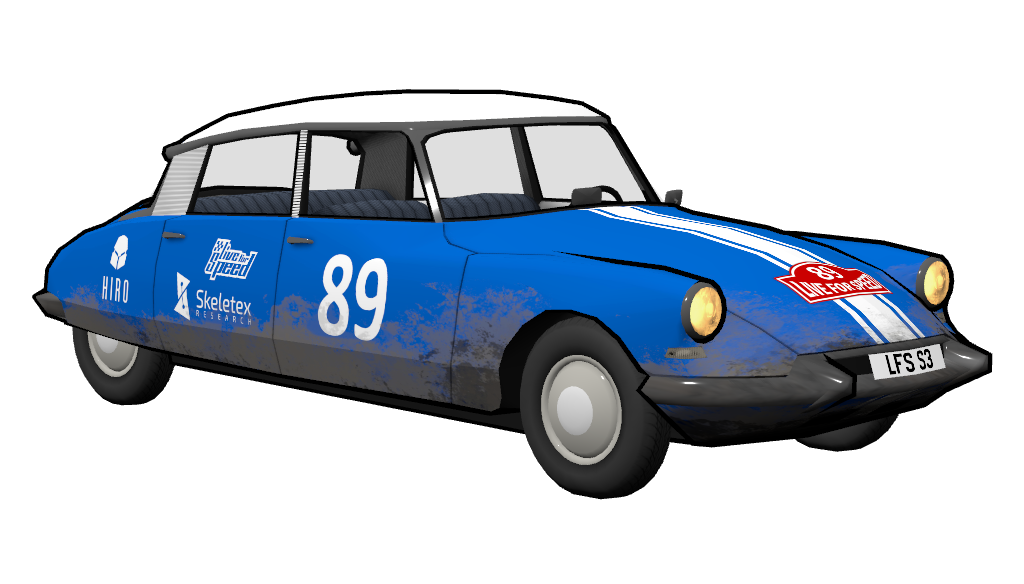 A Classic 1960s FWD French rally icon
The Lemon Fantomas is a fictional futuristic sedan made in France between 1955 and 1975, which replaced the older Adieu models. Equipped with a front wheel drive, a monocoque body, front disc brakes, a hydraulic power-steering and a completely unique self-leveling hydropneumatic suspension, the Lemon Fantomas was the most advanced car of its era and did not have any direct competition in terms of comfort, safety and handling. Despite of being under-powered and heavy, the car became very successful in rallying. Flying through the snowy Monte Carlo and endless safari rallyes, the car excelled with a stock suspension, where others struggled to finish with strengthened springs.

Cars with power-steering did not have any steering feedback, but were stable even if one of the tires exploded. During an assault on a French president, two tires on the presidential Lemon were shot at 100kph, but the driver was still able to drive the car safely to the airport.

This particular Lemon was built between 1963 and 1968 and enhanced for rallying. The suspension remained stock, but the original 75bhp were increased to 125bhp using a twin-carburetor conversion in combination with an increased compression ratio. This enables player to setup multiple stock and racing vehicles using the voluntary intake restrictions for both realistic cruise and racing.

Stock (cruise) versions:Racing versions:Driving tips:
The mod is ideal for cruises, vintage twisty races and some rally-cross on rough surfaces. It is not suitable for faster tracks. Requires smooth driving (and a bit of practice), as it does not have a common force feedback and the suspension is extremely soft. The rally setup is easily controllable using the left foot braking. The car can be effectively rotated using the brakes and consequently stabilized with the accelerator. However, the front tires can be overcooked quickly when using less than 23% voluntary intake restriction.

The author of this Vehicle Mod has indicated that this work is an original creation and has provided the following description of the approach:
The textures and the 3d model are made from scratch by the author (using Blender, GIMP and LFS Editor). The texture uses post-processed light textures from RB4. The Skeletex and HIRO logos are used with permission.

The basic model proportions were set according to:
https://mekanikacadcae.files.wordpress.com/2014/11/1959_citroc3abn-ds-19-id-19.jpg
https://www.citroenorigins.co.uk

Some technical details were changed to meet the requirements of the Live for Speed physics. The fuel tank was moved in the middle of the car to to approximate the hydro-pneumatic suspension. This minimizes its effect on a ground clearance.

I have started working on a classic rally car with an unique hydropneumatic suspension. An accurate suspension approximation will be quite challenging but the first test-drive has been suprisingly satisfactory 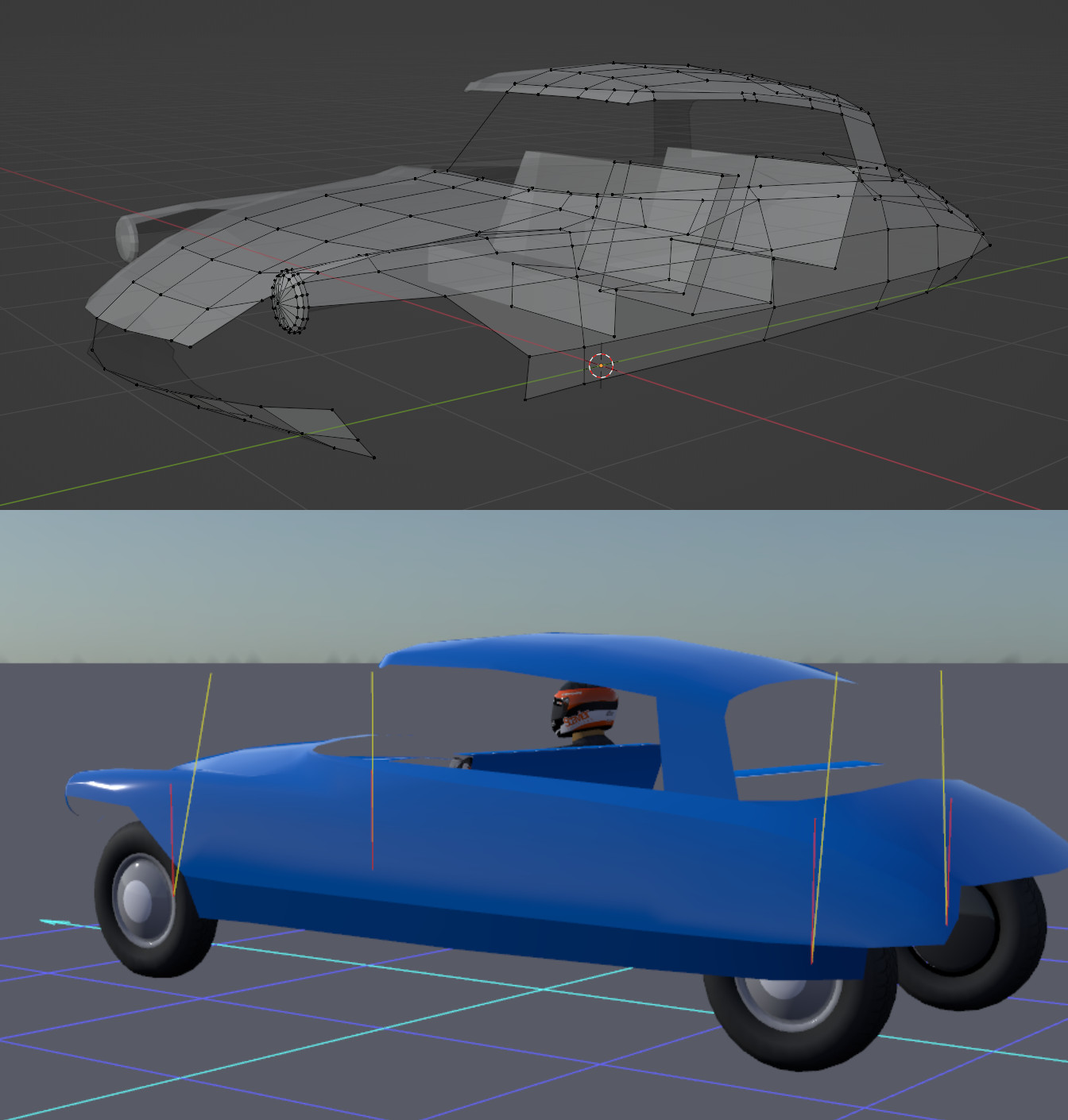 Progress: added an accurate geometry and a front bumper. The first capable version of hydropneumatic suspension is done. 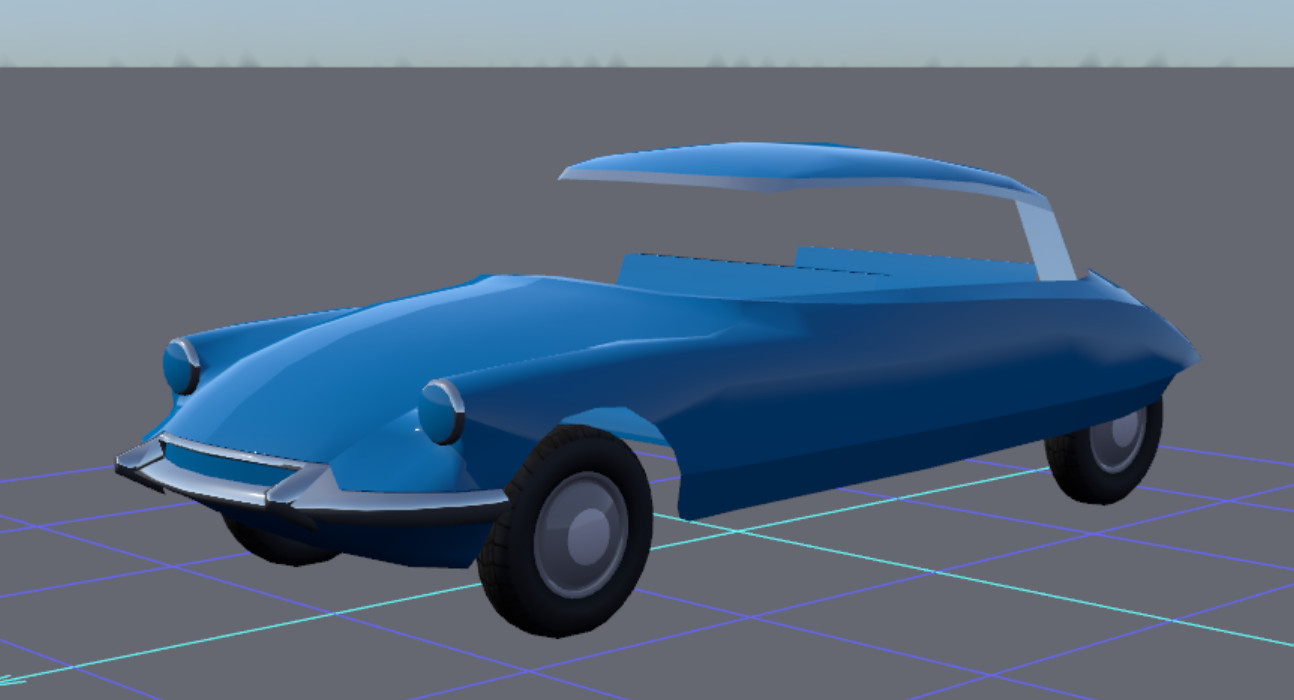 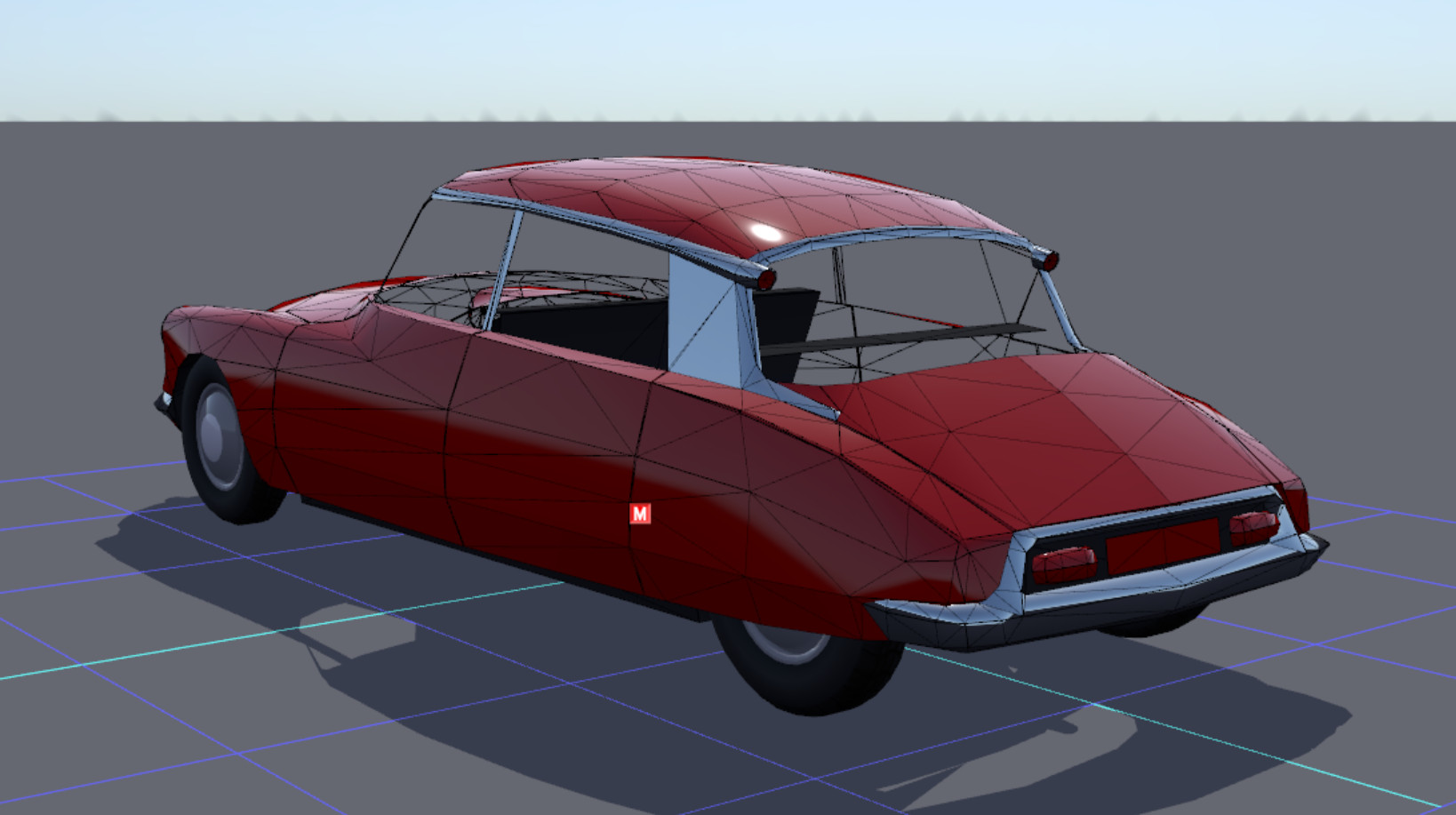 I will try, but not sure if I am able to set the aerodynamics properly 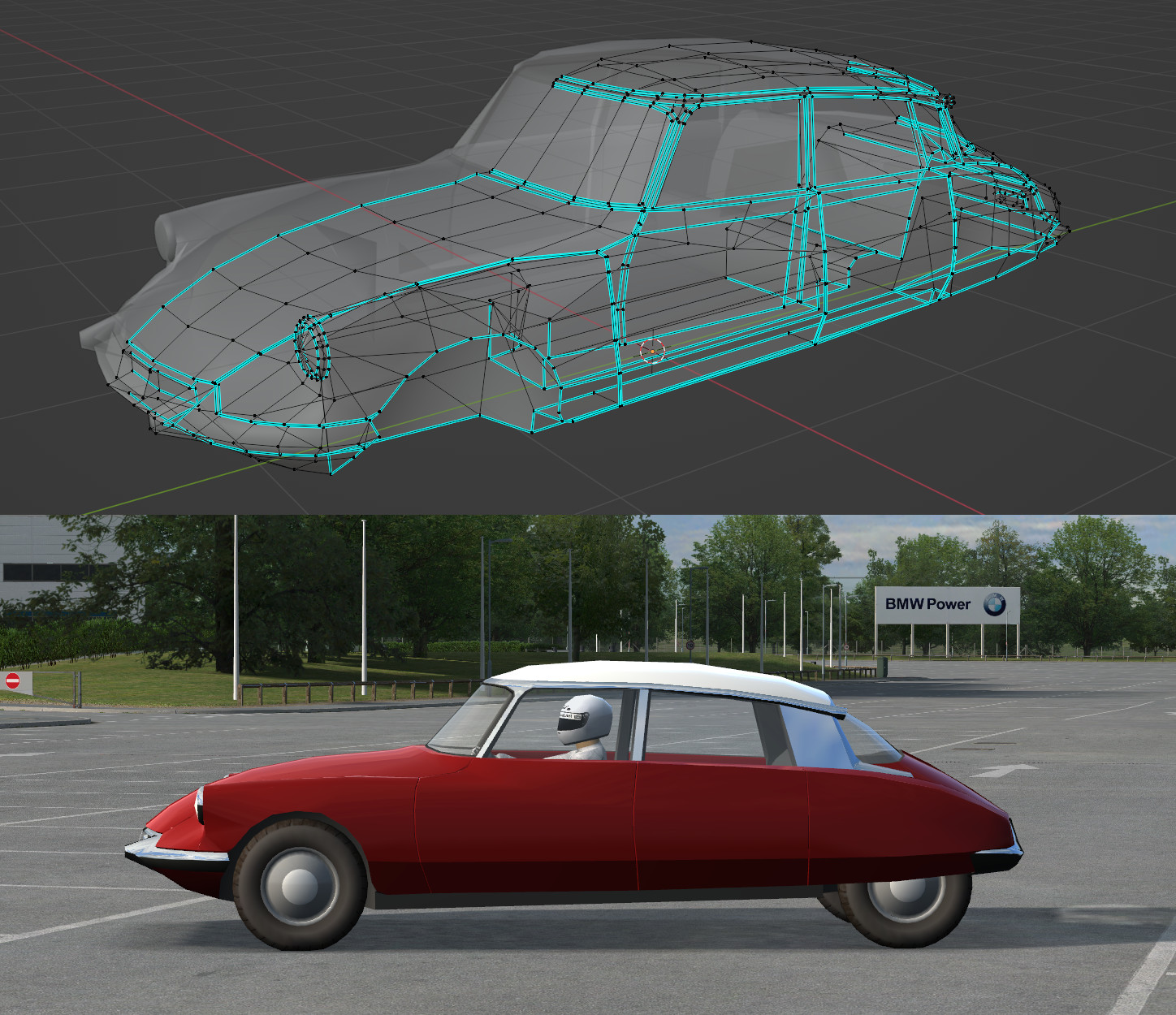 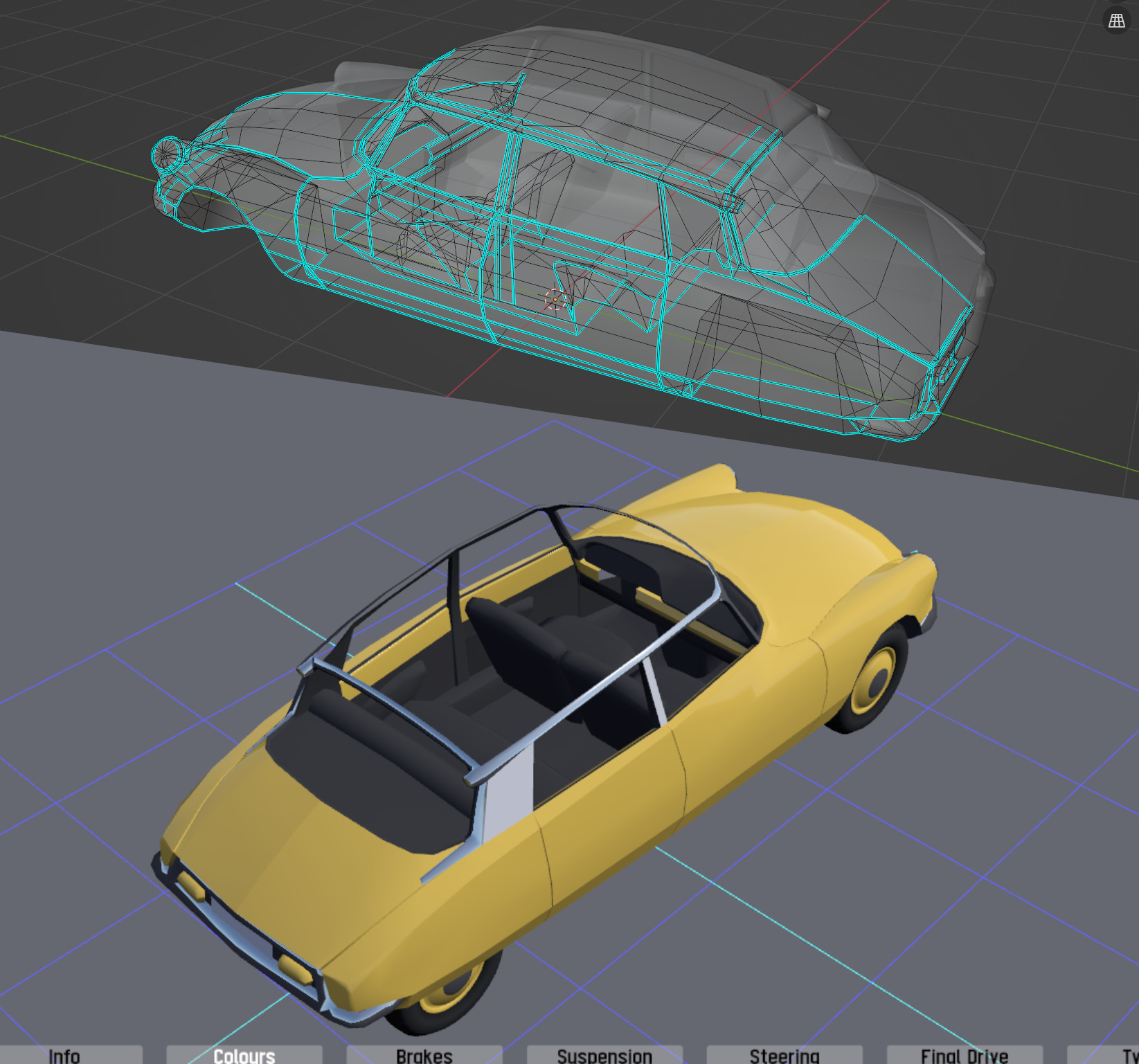 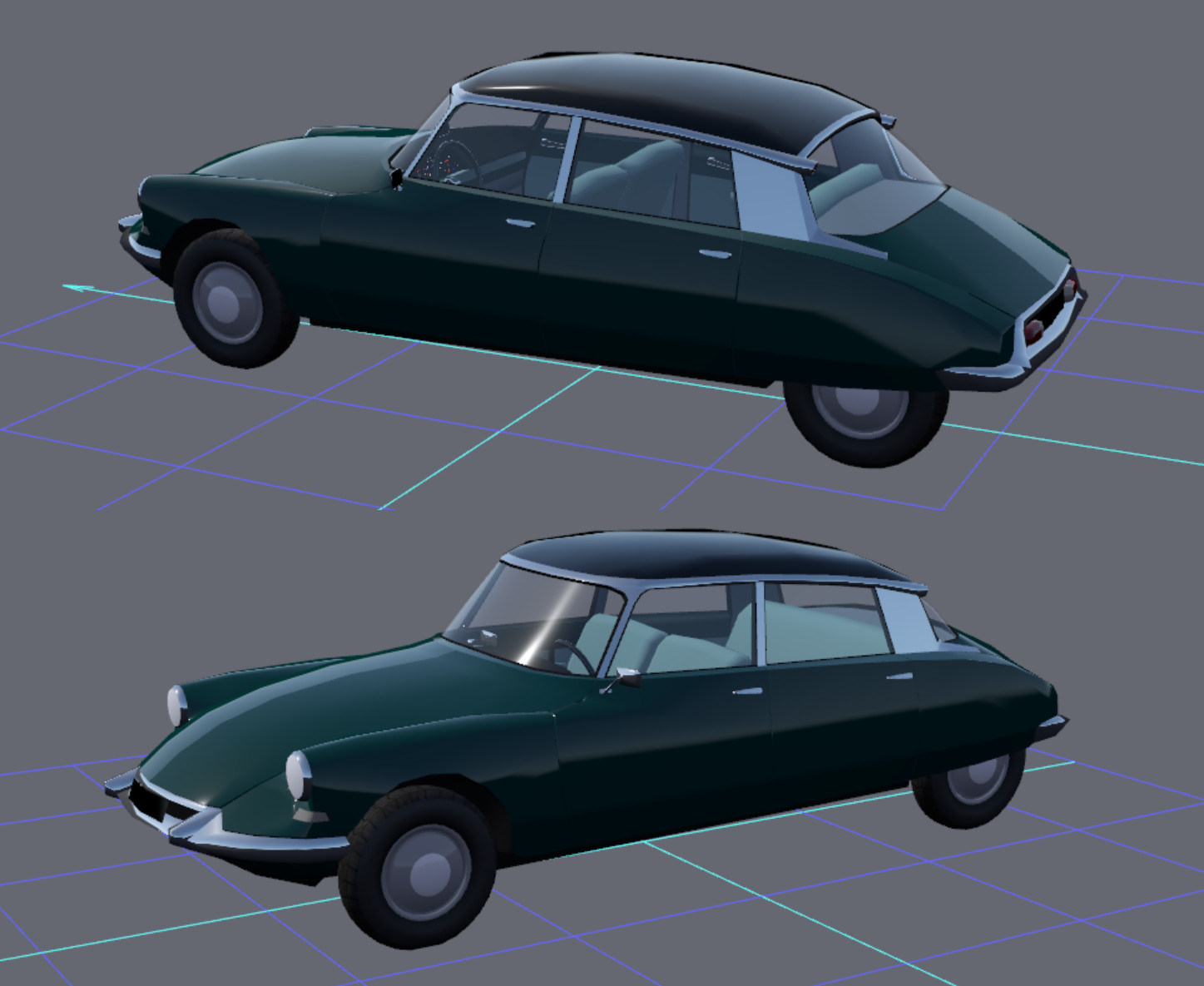 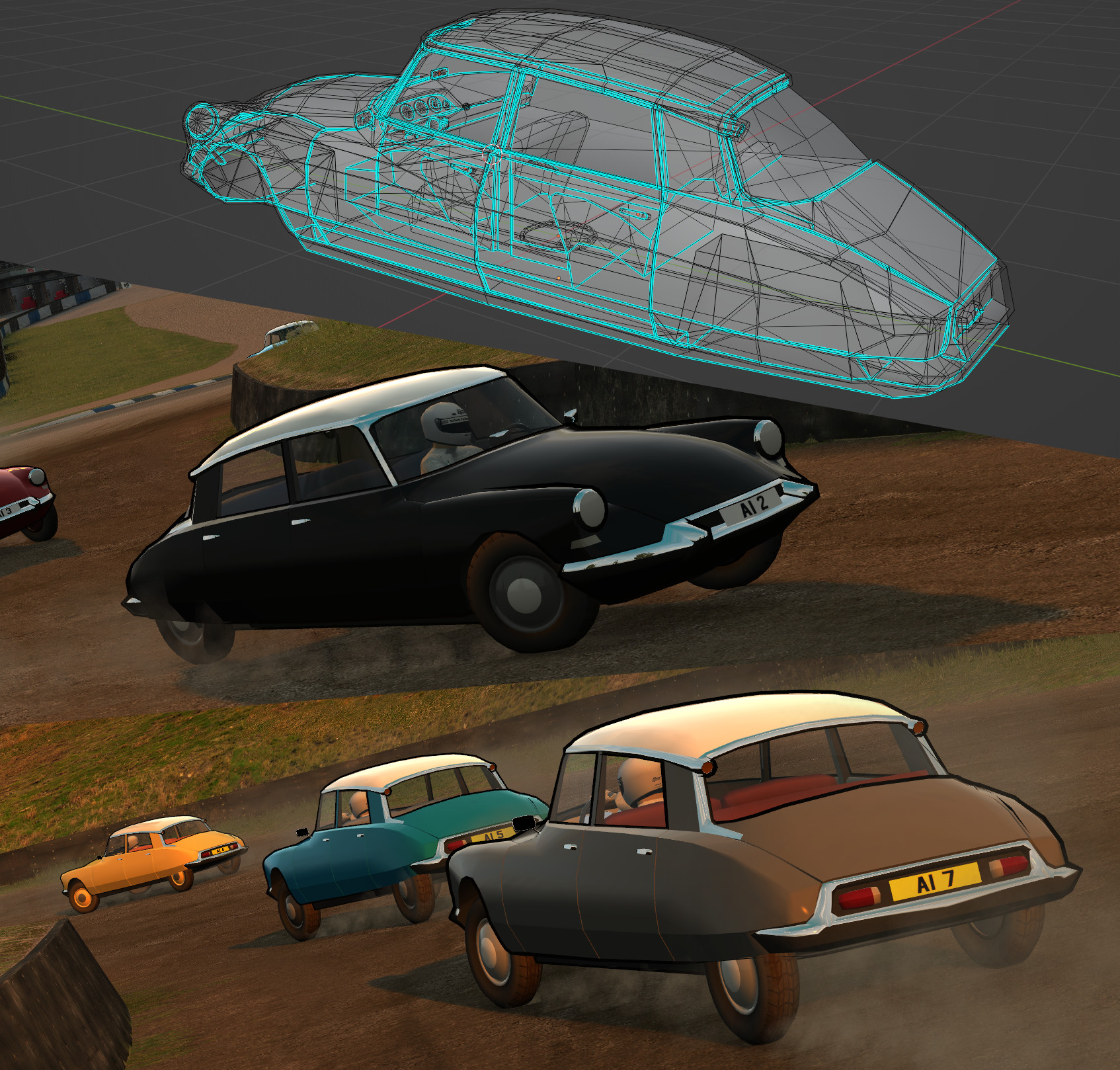 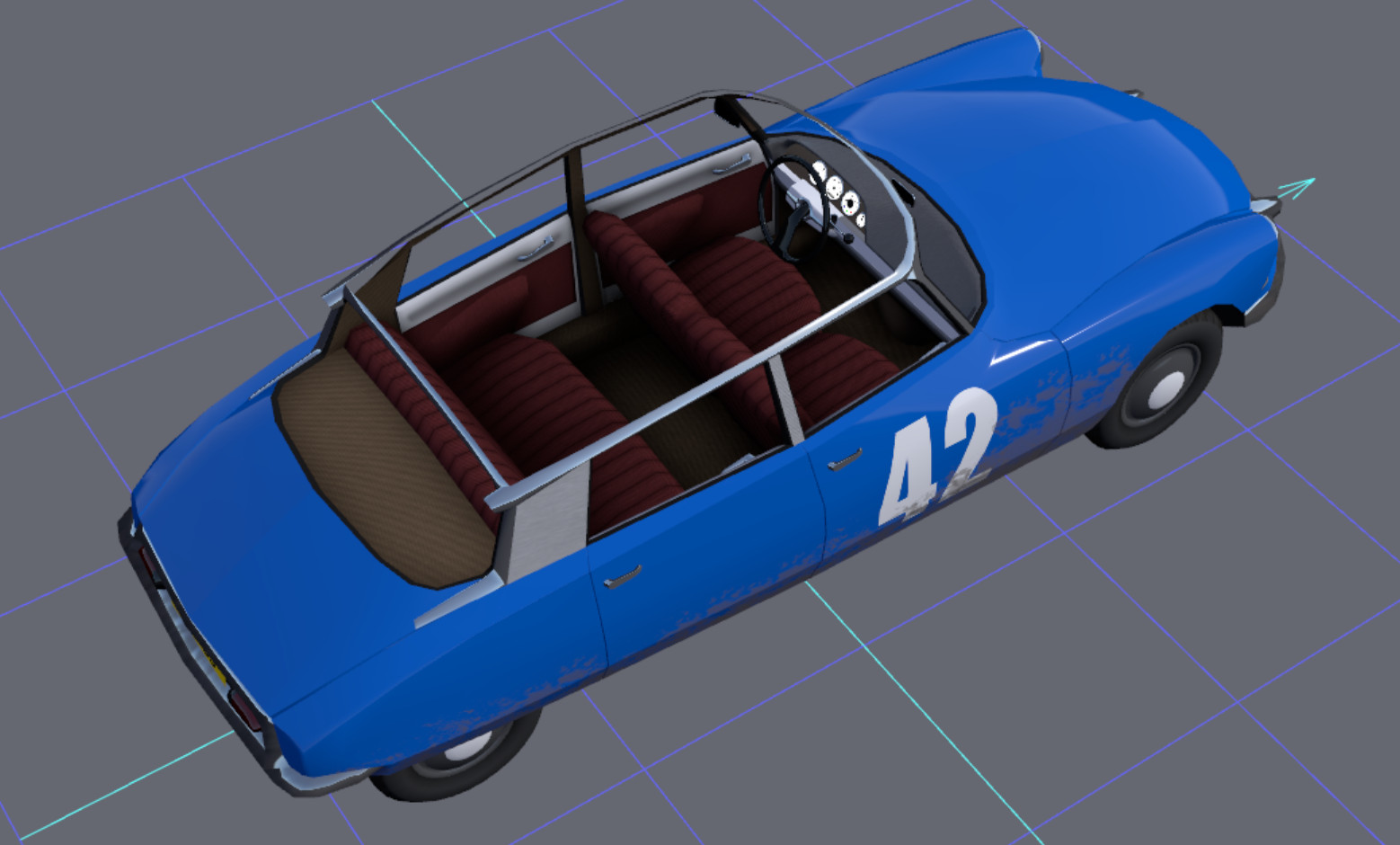 Current progress: added dashboard textures with an ambient occlusion and rally skins. Minor fixes and optimizations. The first version of mod is ready for review.

Edit: Excellent work and I am surprised to see Fantomas known outside France !
turbofan

S3 licensed
Joined : Mon, 6 Sep 2010 16:16
Posts : 61
Online at :
Just a Ride
Very nice job, handles as expected, shading/texture is great.
So nice it would have deserved a more detailed mesh, like subdivide smooth.
Fun story is I always despised that car, it is so ugly and drives like a slug, but that's in the real (past) world : )
Can't wait ur next mod already !
johneysvk

It was quite popular in Czechoslovakia, Louis de Funes was in general
stuchlo

Agree, many classic French movies are popular in former Czechoslovakia. I am a big fan myself

It is probable that the car was known here mainly because of the movie (western cars were rarer than unicorns in those days). Btw, "lemon" translated into the Slovak language is "citrón" (and "citron" in the Czech language) so it is widely used nickname for these cars.


Yes, all my mods are low-poly. It is not as nice as it could be but it can run smoothly on older machines and body deformations work much nicer in the LFS engine. Also, it enables some special effects as the "toon shading".

However, the main reason is that I cannot help myself. I love optimizations

Trying to get the maximal effects from the minimal resources is a challenge which adds a very special kind of fun into the modding process. Everything is optimized - number of triangles, used texture space (in both textures and skins), vertices are carefully distributed to minimize problems of the Goraud shading and a lot of shading is drawn directly into the textures. Therefore, I am not planning any extensive subdivisions, but yes, there are some places which will probably get more polygons in the future

(currently working on a geometry update of my Hadimrska mod).

Thanks for the feedback

Yeah I got the Lemon eureka the other day. Because in France we pronounce Citro-en or citro-hein. But yeah citron is lemon in french too!
I am always amazed to see the De Funes success abroad. I think about him at so much french tipical but his acting was so much visual that it worked in many other countries.
On low poly and deformation you are totally right some high poly mods are very ugly after contact.
stuchlo

Update: added a playable movie version and upgraded the engine according to contemporary 1959 sport modifications by Ricou (the previous engine was based on Connaught conversion, which was considerably slower) 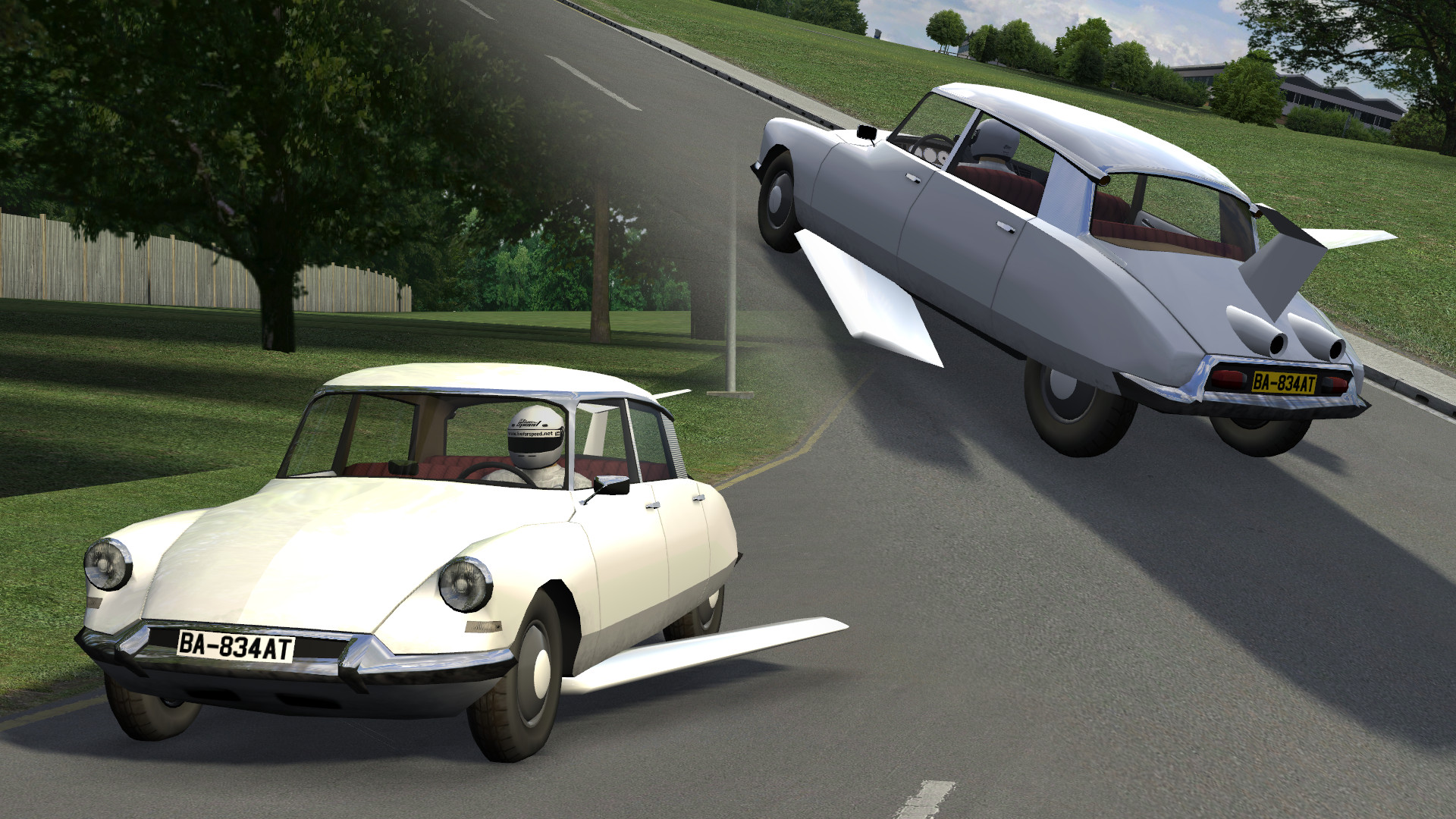 This old car is great

Update:
Suspension and wheel alignment have been updated according to technical drawings and repair manuals. The update improved handling and removed an unwanted force-feedback jerk caused by potholes and grass. An accidentally found bug enabled a visual improvement of headlights (when more than one texture is used for light mappings, the lights can "switch" between two overlay modes) as can be seen in the picture. From the top: the old shading, the current shading and the current shading with a damaged headlight. 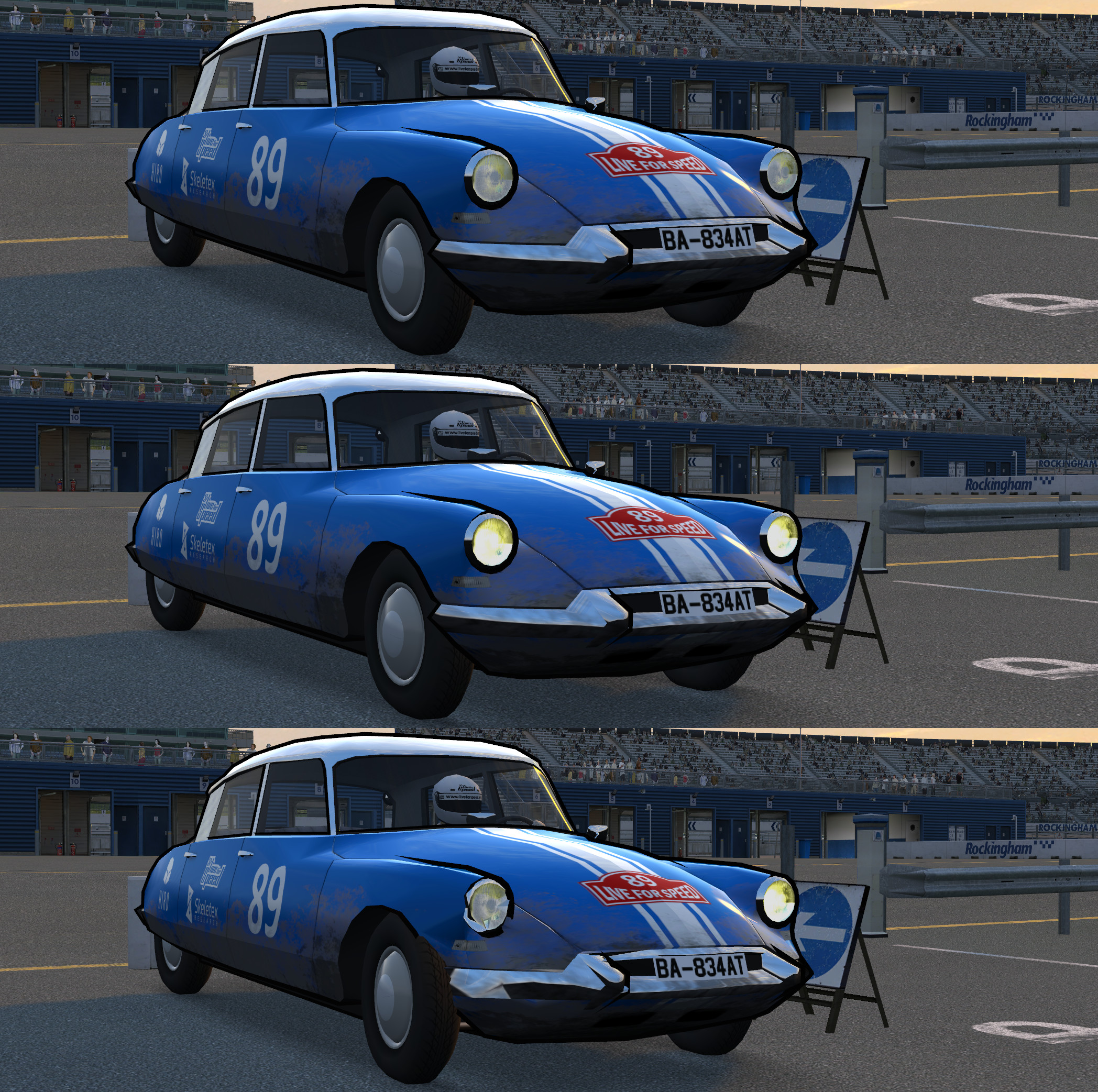 I gave it go yesterday at Fe Rallycross it is fun!
I don't know how do you that cel shading effect but it looks nice.
stuchlo

I have wrapped the car body in a larger black car body with flipped normals. Originally used this technique to recreate the Lemon Adieu from "The French Dispatch" movie and "The Adventures of Tintin" comics to have some online gangster chases with my friend

That is a interesting trick!
I need to check this Traction too!
stuchlo

After the last update a lot of test driving and cross-checking with newly obtained sources, I have become satisfied with the mod physics and the force-feedback. Both stock ID and DS can be simulated using voluntary restrictions (instructions can be found in the mod information page) and multiple custom rally versions are also configurable.

From this point, the derivatives of the mod are allowed under the LFS Vehicle License

When using the Wheel on the Right side, the indicator lights on the dashboard are reversed/flipped (See attachment below)
stuchlo

It was quite tricky (needed a completely new special separate mapping) but should be fixed now.
stuchlo

Thanks a lot for mod ratings

The mod approval made my day