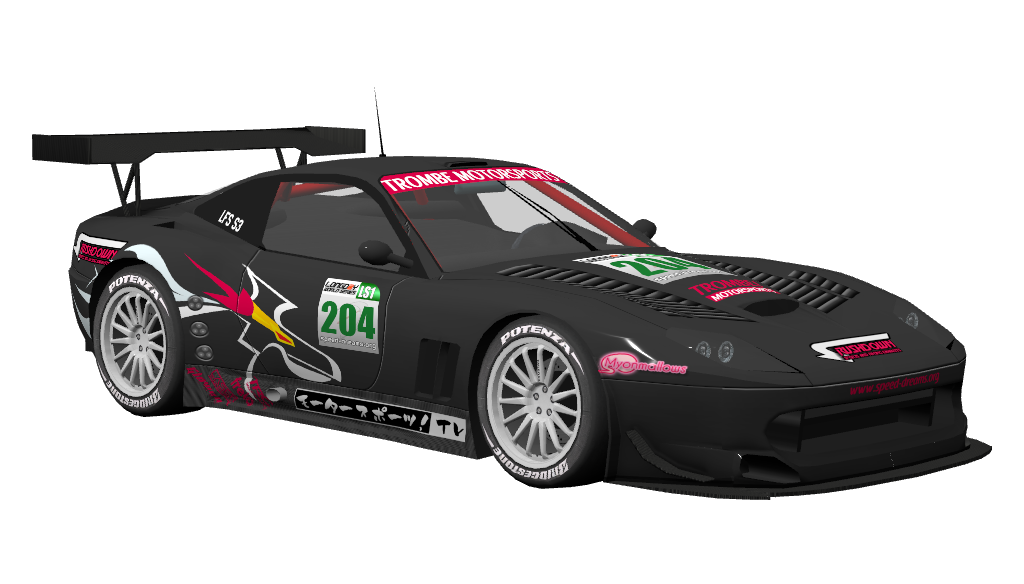 GT3 racer
This is Cavallo 570s from the open source game Speed Dreams.
They have a bunch of models distributed under Free Art License.

Thanks to -verde- for creating a LFS thread about the models!

Thank you Brett (Jake_Blasted) for finishing touches and helping overall.
Thank you martin18 for the engine and sound. 10/10 would would get engine again.
Development discussion thread: https://www.lfs.net/forum/thread/96103

License type : CreativeCommons Attribution (BY)
Derivatives are allowed : NO

Sports car model based off of the Ferrari 575 GTC

Currently working on a car called Cavallo 570s from the open source game Speed Dreams.
They have a bunch of models distributed under Free Art License.

Thanks to -verde- for creating a LFS thread about the models!

This will be based on specs from the Ferrari 575 GTC.

Looks awesome, excited for this one!
PopnLochNessMonster

One problem I'm having is getting the headlights to turn on.

yes, thats what i faced too.. two or more things can't share same of the special mappings for lights.. maybe try to make the lights on 1 object. something like the fz5 lights
nikopdr

both need to be in the same l_head for them to work together. had a similar problem with double front lights yesterday evening, it seemed easier to make 2 separate l_head mappings, but it didn't work like i expected it to.

i fixed it by mapping them both into same l_head and making a new texture for them to still cover both lights. after all the mapping screenshots work with those too, not just skins

it's not bad progress so far, mesh looks a bit awkward around the light but it could be worse. hope it doesn't handle too much like an XRR

might have a fitting skin for this, as i based it on this but it depends on how much different the skinfile looks compared to FZR

Uploaded the mod! Now we wait for the approval. Here's the template and wireframe.

Plus some included skins that came with the model.
neonmateo

Hi there, it seems like there is an issue with a shadow, only wheels cast a shadow while body of the car doesnt.
PopnLochNessMonster

I have fixed that issue now, turns out I forgot the LOD2
leillo1975

Ohh, you touch my heart. One of my favorite cars of the best Open Source racing game Speed Dreams. Let's try it!!!

Can you bring us more SD cars to LFS?
BeNoM


I can say that this is for me the best mod I tried for LFS. Thanks a lot for this great work!!!
w126

Nice to see someone using LFS on Linux. Do you use LFS on Wine with DXVK?

For me it stopped working correctly with standard Wine (stable, 6.0.2) during current test patches (probably with the changes to car shaders). It works with Proton (Steam), though. I haven't tried standard Wine with DXVK applied manually yet.
Jake_Blasted

I eventually have plans to make the interior better....probably will just take the dash from an LFS car and make some changes to it who knows
MandulAA

Might be nitpicking in visuals, but I was just about to ask for more edges/nodes for the side mirror (subdivide the edges a bit more), as it looks very bad visually, compared to how the car looks for the outside (which by the way looks great). Any progress on the interior update?