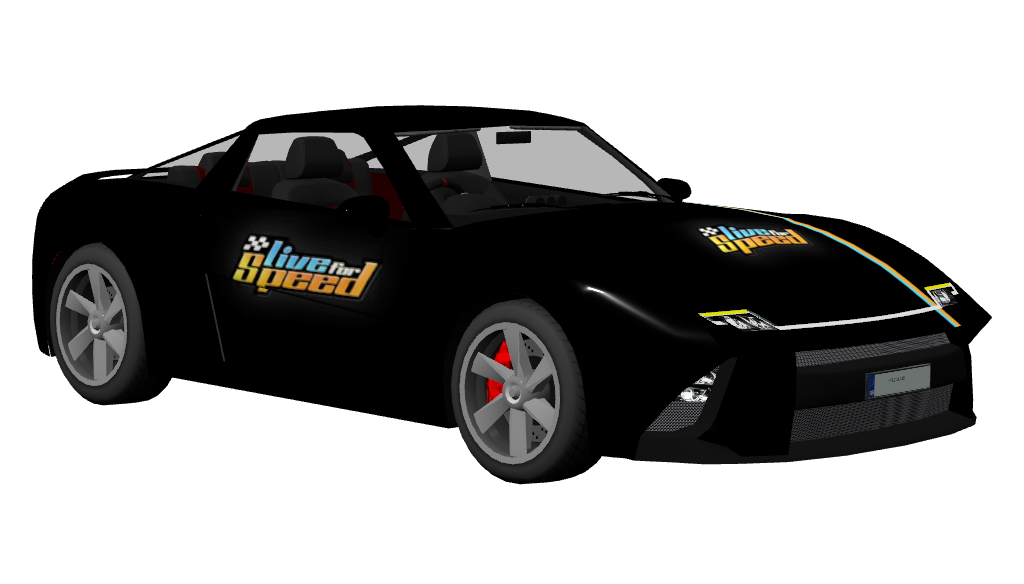 * Some parts from other LFS cars.
Development discussion thread: https://www.lfs.net/forum/thread/97746

The author of this Vehicle Mod has indicated that this work is an original creation and has provided the following description of the approach:
Car made from scratch by me and my brother. We are part of the Gearbox Channel on Youtube. The vehicle is a reinterpretation of what we envision a new generation of the XR to be.

License type : CreativeCommons Attribution (BY)
Derivatives are allowed : NO

This Vehicle Mod is a fictional one.

These days I was analyzing how people like the XR, it's the most loved original LFS car!

With that we had the idea (my brother and I) to create a new generation for the XR from scratch. It's a big challenge, we made some sketches by hand and then moved to the computer. Of course, these are just the first sketches, a lot can and will certainly change.

The XR was clearly inspired by the Mitsubishi Starion, and its interior is from the Mitsubishi 3000GT/GTO. As there is no real successor to the old Mitsubishis, we were inspired by a sketch made by a South African designer, in which he made his digital reinterpretation of what he imagines the new generation of the Mitsubishi sports car would be. Obviously we want to create something nostalgic, more oriented to what the original XR is, but it served as an inspiration. The first photo is the concept that the Designer created of what he imagines to be the new generation of the 3000GT, and the others are our first sketches of the New XR! More details coming soon!
Flayer

After many, many sketches, this was the one we chose. It has already been in the modeling process for 5 days. I'll attach a photo of the 3d mesh later

Well that's one less project on my todo list

I've been waiting for someone to make a futuristic looking mod for LFS. I'm looking forward to a release, good luck.
Flayer

Hello friends! Thank you all!

I'm sending pictures of the progress so far. A lot of details are missing besides smoothing the 3d mesh, creating the interior and all the textures, but we can already see how the project is doing.

After the project is complete, we can create the XR-R, racing version.

More details in the coming days!

I like this idea but don't lose sight of what XRG actually is. It's a cheap coupé. Your design is interesting but the proportions feel more MR than FR so try not to lose the XR DNA.
This is all open to interpretation, though, Good luck!
Flayer

The idea is to keep the concept of entry-level sports coupe, such as the Supra A90, Nissan Z and Audi TT. The XR (more specifically the XRT) was based on the old Mitsubishi Starion, which was replaced by the 3000GT/GTO. If this car had a replacement these days, it would definitely be in this segment. Our prototype still preserves the 2+2 interior, and will have rear-wheel drive and longitudinally mounted engine. We can increase the frontal region due to the V6 engine, or even leave the XRG with a smaller engine displacement, focused on the market that the Toyota GR86 occupies.

After a lot of work, we arrived at this result that you can check out in the photos, what we think is the new XRG! We put it next to the old XRT for comparison.

We resized the car to be similar in size to the Toyota GT86, a car that could compete with it in real life. We've increased the cabin area and hood area to encompass a front engine. In addition, we redesigned the entire back.

There are still many, many details missing, such as the internal area of the headlights, textures and creating the entire interior of the car.

The engine is still in doubt, but we think of a 1.8 Turbo engine with power close to 200hp, and a six-speed manual gearbox.

Cool mod, nice work there man. I'm really not a fan of those 3 pointy lines along with the hood, but the rest seems good.
Flayer

Thanks. These details are air extractors, a small homage to the old XRR.
Eclipsed

I admire your creativity to make something like this,but please don't call it the new XR - I would leave the rights of this letter combination to LFS devs. People who create cars by themselves (and not just copy/paste some downloaded models into LFS Editor) should "found" a fantasy car company and release their creations under their own name.
Flayer

I've been working on the dashboard, steering wheel and multimedia screen, now we're drawing sketches of what the car's interior will look like. Logically we want to keep the 3 dials in the middle of the panel, like the original XR.

Motorization we thought and tested several possibilities, and what pleased us most was a 1.6 Turbo engine with 200hp. I believe it would fit in very well with the project if it were a real car, in times of strict emission standards, in addition to being an entry-level sports car. For the XRT version, we thought of something stronger, we still thought of a 6 cylinder (we will test), focusing on the segment above, and visual changes such as bigger and wider wheels, bigger spoiler, changes in the bumpers, among others. But first we need to finish this XRG.

Maybe use the name XR2 or another name, and the logo of my fictitious brand, Nortz (The same as the Nortz Expert mod, MotoGP).

Nortz XR2 [Turbo/GT/GTR] deffinitelly sounds better - has it's own name and yet has the connection you wanted.
Flayer

I bring updates about the project!

Over the last few days, we've smoothed the mesh and windows, redesigned the rear bumper, created the skins, created the outside mirrors, added logos and branding, removed the hood vents, and tweaked the mechanics and physics.

Now we're working on the inside, recreating a sketch we made by hand in 3d.

The result you can see in the photos

We also think it sounds better

You should use custom colour mappings to enable people to change the car colour to anything they want without having to change the skin.

Thank you! I will work on it!
Flayer

Just tested, making a comparision race of 2 laps against the XRT driven by AI (difficult MAX). Using the keybord for me is hard to take the corners in the cleanest way, but I lost only for 0:00.58 and did the best lap. On straight the XRT is faster, on the corners the XR2 feels better.

In my opinion you should improve interiors and sound. Also the dashboard (speed) was blinking, but I'm playing on very low graphics.
Flayer

Physics was where we strived to make the car fun!

As for the details, we are improving little by little. The car was much more complete, with more textures and interior details (like fire extinguishers, cup holders, seat belts, frame on the radio), but unfortunately I had to take everything out as LFS has a pixel limit for png images. I had even created engines, radiator, battery and transmission in 3d, but I had to remove it.

This car is very phenomenal. Well designed and excellent on the interior. I do have a request, could u make a trackday setup and add only R3's and R4's? I would appreciate it

Thank you friend! We are creating a semi-track version based on the XRT2 variant (2.5 V6 Turbo) at the level of Porsche Cayman GT4 for example. But a variant for Trackday based on the entry version would be really interesting! :-)
Octosquad

I'll be HYPED for it!


Looking forward to trying it when its released

New project update! The changes were:

New project update! The changes were: