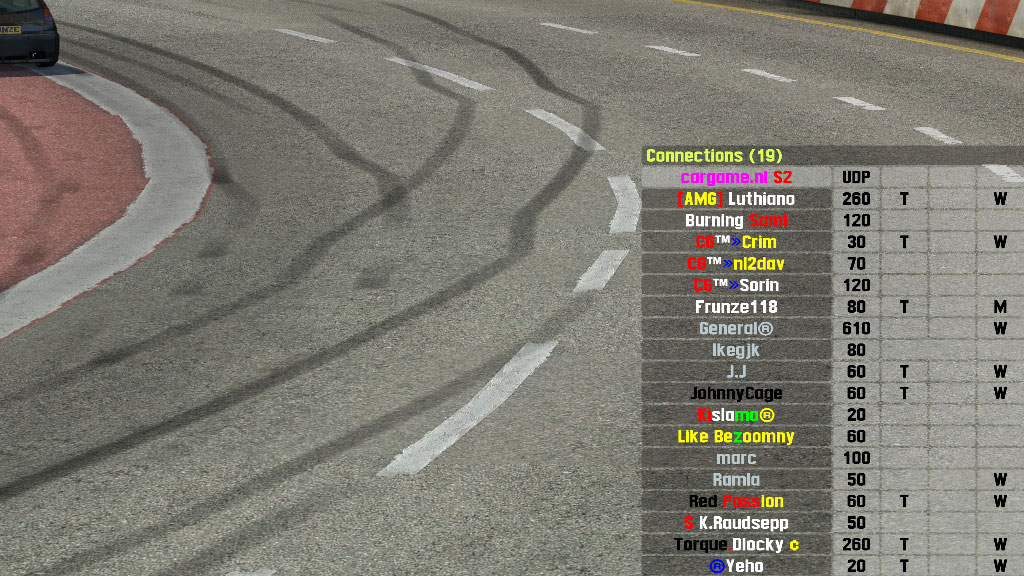 Much faster connection to multiplayer hosts
Connection appears instant to the other guests
You can pit / spectate / etc. while a player is connecting
No OOS caused by joining while objects are added or removed

New hacking protection and cheat detection systems
Improved user name checks during and after connection
Lag bars at bottom left show ping or delay of all guests
Ping time (or delay) shown as number in list of connections
OOS / CPW messages now show user name instead of player name
Instead of "LAG (seconds)" now "name (seconds)" is displayed
No buffer overflows from hangs or operating system time changes
Auto rename when you join a host with someone else's player name
User name in brackets now shown at end of disconnection messages
Left / right click on player name in replay now works as online
Race setup screen /clear command can now only be used by admins
Use of UDP or TCP is shown beside host name in connections list
Removed notification sound when a car is spectated by an admin
Added /player command to dedicated host setup.cfg file

Custom view was not set to new car type on replay restart
Duplicate lines in scripts could cause unexpected results
Virtual speedo sometimes overlapped numbers (e.g. XRG km/h)
Leaving garage screen could cause problems with a car script
User's controller type was not shown after taking over a car
SHIFT+R near end of SPR could make cars swap between players
Circuit length is no longer displayed for open configurations
Remote car with brakes on started to roll if reset on a slope
LFS could crash when displaying laps for fuel after short laps
Ready status in lobby is now checked when a player disconnects
Load WE1R on dedicated host - Checkpoint 1 path node not found
Short MP Replays were sometimes extended to a time of 10:55.36
It was possible to make an AI driver join with a disallowed car
Message typed while watching replay appeared as written by host
Message "Max guest cars : X" now shown in the selected language
Cars intersected if players joined autocross at the same time
An unusual state in which LFS displayed only a blank screen
Two instances of LFS no longer write to the same MPR / SPR