The favorites of season 16 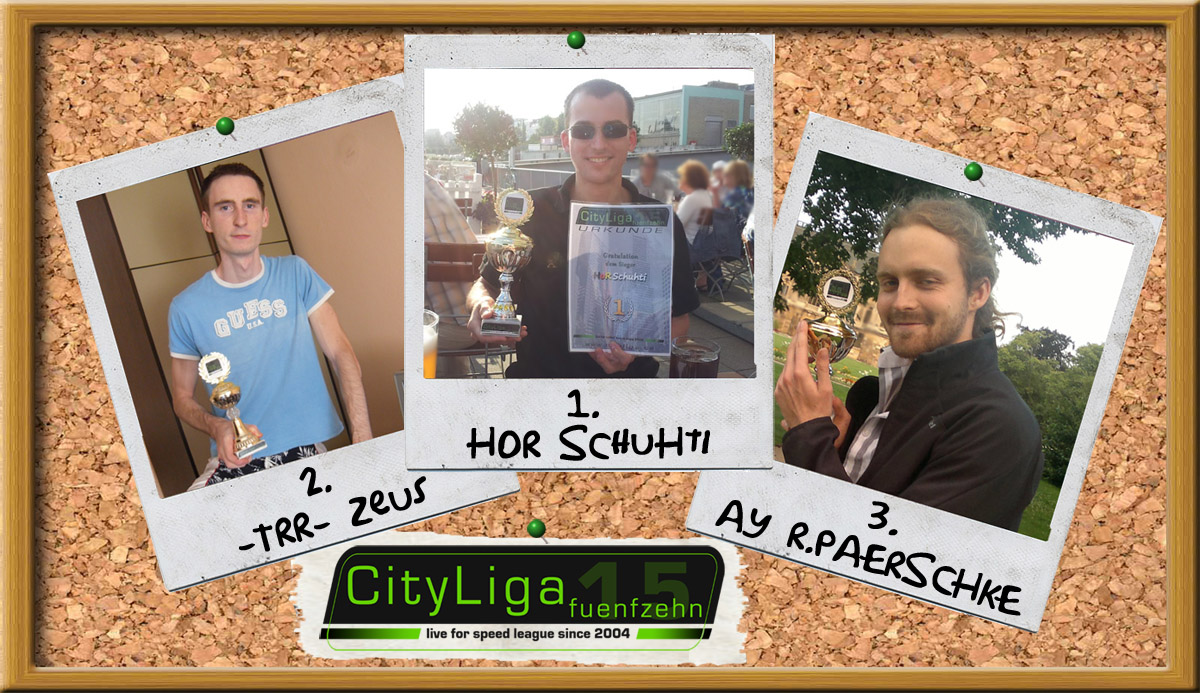 Ok, I know, this is released right after Round 1 finished. Still this favorite check by Ethi is worth to be translated.

The sixteenth season just started and the increased number of internationals and many well sounding names from the Germen scene promises the season to be exciting. Thee CityLiga champions are on the grid, but one may question if they really are able to add another title. The competition is hard. The races will be tight and demanding. Over 100 drivers signed up for the season.
The grid qualification is over but what do the results really tell us? Some did great times, some just showed enought to make Grid 1. The races are the true place to show one's real strength and where the questions are answered who can hope for a good finish or even the title or who just floats with everyone else. Anyways, the author of this article dared to start a list of favorites, which either proves to be gold standard right or awfully wrong. It is just a list of personal expectations, nothing less but nothing more.

***** 09- -TRR- Zeus
Niki nearly did it last season, nearly won the CityLiga title, but in the penultimate race he had to burry his hopes and Schuhti won it. He will be anxious for the correction of this flaw. He is known as strong league driver and with his strengths the season's carlendar should play into his cards. He is the top favorite for CL16.

**** 79- 3id J.Holmes, 01- HoR Schuhti
Holmes is the second strong international driver in CL16. He might be the fastest driver in LFS. His 130 plus world records are at least suggesting this and his success in league racing as well. The question is: How serious does he take CityLiga? When he trains, he's a favorite.
Schuhti is the reigning champion, who, after many good results, finally made, in stunning fashion, the step onto the top of the podium and beating all the great drivers. The question is, is he now statisfied with his title? Or does he want to add a second title?

*** 04- RAPTOR | Paddi, 05- Xcite C. Winkler, 32-CR|troy
If his wheel didn't break during the season, he might be crowned champion. Should've, could've, would've... He has what it takes to win a race against the best and together with consistency this is what you need to win the CityLiga championship. With the right motivation he has is a title aspirant.
Cali is the champion of CL14, but due to health issues he couldn't compete in the following season. Now he is back and highly motivated to repeat the old success. If the health is no problem, he will have a succesfull season, but for the top spot it might not be enough after 6 months of a forced break.
The swissman troy has a legendary fame in endurance races, but in CityLiga he also left some impression. He finishes all races, is consistent and might be the greatest tyre consumer in LFS. Sadly he sometimes has problems in Qualifying and maybe the CL races are a bit too short for him, but there is no doubt he'll achieve a good result in this season.

** 37- ineX Philip Ellis, 07- ev0»F.Hillen, 82- P. Kubinji, 27- CoRe Chris
Philip is a reallife driver from Formula 3 Euro Series. There he showed great talent. Philip also has some CL experiences, but they are not that recent. It is going to be interesting how he will present himself in this field. Maybe it lacked the stability and the outstanding result, but this can be different today.
Felix Hillen is a name, which stands for fast times and controversial scenes in the German LFS scene for years. He is indisputable one of the fastest drivers but he has to prove his stamina to succesfully complete a CL season.
Patrick is two time CL champion and the only thing which stops him is his own motivation and of course the tyre physics. He will pick out two or three races, train hard and drive as good as years ago.
Christian has many kilometers on his LFS odometer and frequently improves himself. After a long break he will grab his wheel and actively drive in CL once more.

* 91- MTDZX-P.Röben, 71- CoRe Vale, 44- »M.Schnieders, 89- ev0»G.Eckhardt, 03- AY R.Pärschke
Last season, P. Röben aborted his season, but this time he is back and tries it another time. Röben proves to have a good background and although a win might be a bit too ambitious, some good results can be expected.
CoRe Vale is totally unknown to the author. Tracker times, LFS stats and the opinion of his team mate however saying that he is a real good one.
M.Schnieders and G.Eckhardt are like F.Hillen Team Evo members. All are very fast and long time LFS active drivers. As Marco and Gerrit are training less then Felix, they only get one star. On special combos they can show off. It would be pleasing to see they have motivation for a whole season.
Last but not least Roman. The bronze medalist of the last season loves unconventional combos and cashes in good results without much training. Repeating the third place will be difficult, but he might have more time to train this season, since his own built Formula Student race car is finished and it is a beauty.

Let's hope for an exciting season and let the best one win!
Back to the overview
FGED GREDG RDFGDR GSFDG