In his view back over the past season, the author likes to use numbers, as they reveal things still to be discovered. Why should it be different this time? Additionally to the 'usual' statistics further data in form of the CityLiga elections 2011 and the 'general' poll, dealing with the past CL14, was collected. Well, enough said, we switch to the numbers, who, as we know, don't lie.

We're starting with the results of the CityLiga elections 2011:
Both categories 'driver of the year' and 'improvement of the year' Cali got the most votes. With ca. 40% each, he distanced himself from his followers by a larger margin then in his championship campaign. In 'driver of the year' he was followed by troy with 12% and Paddi with 8%. Wasrun was voted for second best improvement of the year (17%), but Flip, hanfer and Totti (all ca. 9%) also made some progress, judging from the votes.
troy became 'Rookie of the year' in a relatively close decision to Totti (32% vs. 24%), but Flip and AndRo seemd to have impressed in their debut and are tied for 3rd with 8% each.
Like in CL14 Heroes of Racing won the 'team of the year' award in front of Xcite Racing. RAPTOR GAMING got the same amount of votes (16%) and thereby Team Simracing-Fahrerlager is fourth.
Rating the races respectivly the combos is always difficult, as you bearly have objective arguments like championship standings.So it is not suprising that there was not only one opinion and the results were narrow. The 'most beautiful combo/best race' was the second one from CL13 with the LX6 @ Aston North infront of two CL14 races, FOX @ Kyoto North rev. and UF1 @ South City Long. Interestingly the last mentioned also got about one quater of the votes for the 'worst combo/race', distancing BF1 @ Aston National, where the car already poralises.
The voter turnout, not even 30 voters, was behind any expectation. The list of candidates including their percentages and all further detals can be found in the CityLiga forum on cityliga.de. 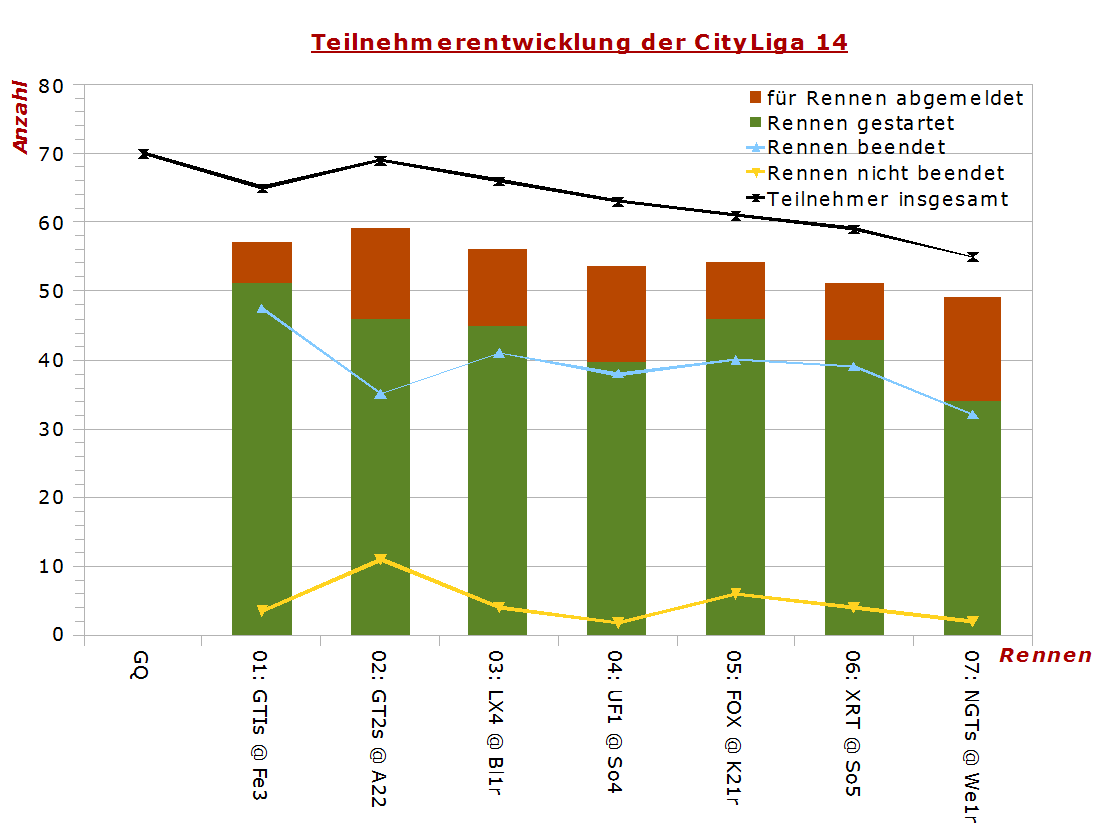 From eight nations there have been
84 sign-ups (63,5 drivers in average, never less then 55 or more then 70, details in the graphic to the right), of which
53 competitors did the season final and
20 competed in all 7 events.

Those twelve mentioned drivers used their drop results, as only the six best events scored for the final results. Biggest users were Cali and Schuhti, whose worst results were a sixth place.

The race wins were shared equally
3 Cali, Schuhti and troy, which left exactly
1 for Paddi, while he was able to climb
6 more times onto the podium, like Totti in the second grid totally.

The most competitors came with
6 from HoR, followed by
5 Conquest racers and
4 in the colours of eXtrem Racing and Xcite Racing (+2 withdraws) and
TSF, who once upon a time were 7, but 'only' three went the full distance.

In the CL poll the majority of the people were pleased or even happy with the offered. The race rythm was judged important, where 70% of the racers were at least pleased with the fortnight spectacle. The best result (if you want to call it that way) got the homepage. The webmaster will happily note that. The combos were still regarded as good, while the 'OpenConfigs', the internationalization and the mandatory pit stop with a minimum time were regarded more ctritical.
Based on the results, the organisation team seems to hit the nail, eventhough there is some room for improvements, which was especially expressed in the 'open answers', which ere used by ten of totally 37 voters.

Granting some worts to those, who helped together with the organisation team to keep the CityLiga going on and who make the league possible: KlausAdam, Luder, splattael and avetere (to both last mentioned a special thank you for the new video archive)!!!

Finally, I thank you for your attention and wish everyone a happy 2012.