"Racing should be fun", and it sure was in this second round of the RB4 April/May Trophy!

Drivers arrived at Aston Club for the second round with high expectations and a full grid was ready to take on this short track. With fastest man during pre-qualify [Q3] Guiouton not being able to participate, trophy leaders RRT|CRNI and [Q3] makakazo looked the strongest drivers on the time sheet. The race was scheduled for a 15 minutes hardcore qualifying session, and two consecutive 20 laps sprint races, lasting about 25 minutes each.

The hardcore qualifying session was again successful and everything was going right when with less than 3 minutes left the session came to an abrupt end caused by an admin unintentionally pressing a race restart macro button. As drivers had driven for more than 12 of the 15 minutes, race directors took the decission of starting the race at the scheduled time with the current grid order at the time of the incident. This left RRT|CRNI at pole, with [Q3] SpeedXP and [Q3] makakazo following him. 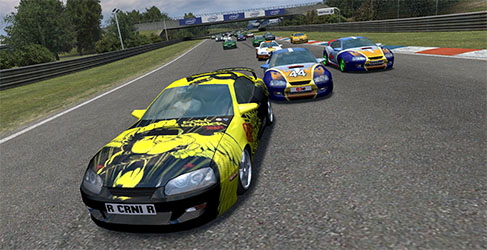 The first race started with an incident involving AMT»Vule and [Q3] makakazo in the first lap which sent both of them from 3rd and 4th to back positions. This gave RRT|CRNI and [Q3] SpeedXP the chance to open a big gap between them and their followers, and as they started 1st and 2nd, they finished the first race, not without thrill as SpeedXP managed to close the distance in the final laps.

The third spot of the podium was grabbed by TEM/Y.Laprevotte, who went from 7th to 3rd in the opening lap managing to avoid the collision in front of him. He didn't had the chance to reach the top 2 drivers, but neither did he struggle to mantain third.

From the 26th position in the first lap, trophy contender [Q3] makakazo managed to climb up to finish 11th, which wouldn't allow him to swap grid positions as the top8 drivers for the second race. 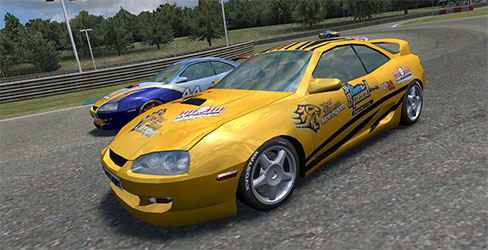 The second race started with the top 8 drivers from the first race reversing their finishing positions, and it also started with another incident, this time involving RRT|CRNI and [Q3] Sergmia. This made CRNI go from 6th to 27th, and with a damaged car. He would take the 15th final position.

After this first incident the race showed a lot of intense and clean battles, with the fastest cars managing to make their way up to the top. Another good start by TEM/Y.Laprevotte put him in first place and building up a nice gap over his competitors behind, fighting amongst themselves. However, [Q3] makakazo, starting 11th, showed a lot of fighting spirit and moved up step by step and managed to catch and overtake TEM/Y.Laprevotte in the 15th lap to never lose the first position back. Laprevotte would take the chequered flag in second position this time.

The battle for the last step in podium really heated up with four cars fighting head to head. [Q3] SpeedXP came up victorious in this battle, with teammate [Q3] Sergmia following him in 4th and R4F Logan 5 in 5th. Fourth podium contender «SS»Dan took the worst part in this battle when he stepped over the grass under braking in the first corner and spun in a very close move with four cars entering the corner very close to each other.


With these results, the event closed with four winners! RRT|CRNI and [Q3] makakazo won each race; TEM/Y.Laprevotte and [Q3] SpeedXP won the most points, both of them with one second position and one third.


Trophy standings after the second round:


All clean racers are welcome to register and sign-up for FRL events at any time! Visit www.funracingleague.com and remember that "racing should be fun"!!!
Back to the overview
FGED GREDG RDFGDR GSFDG