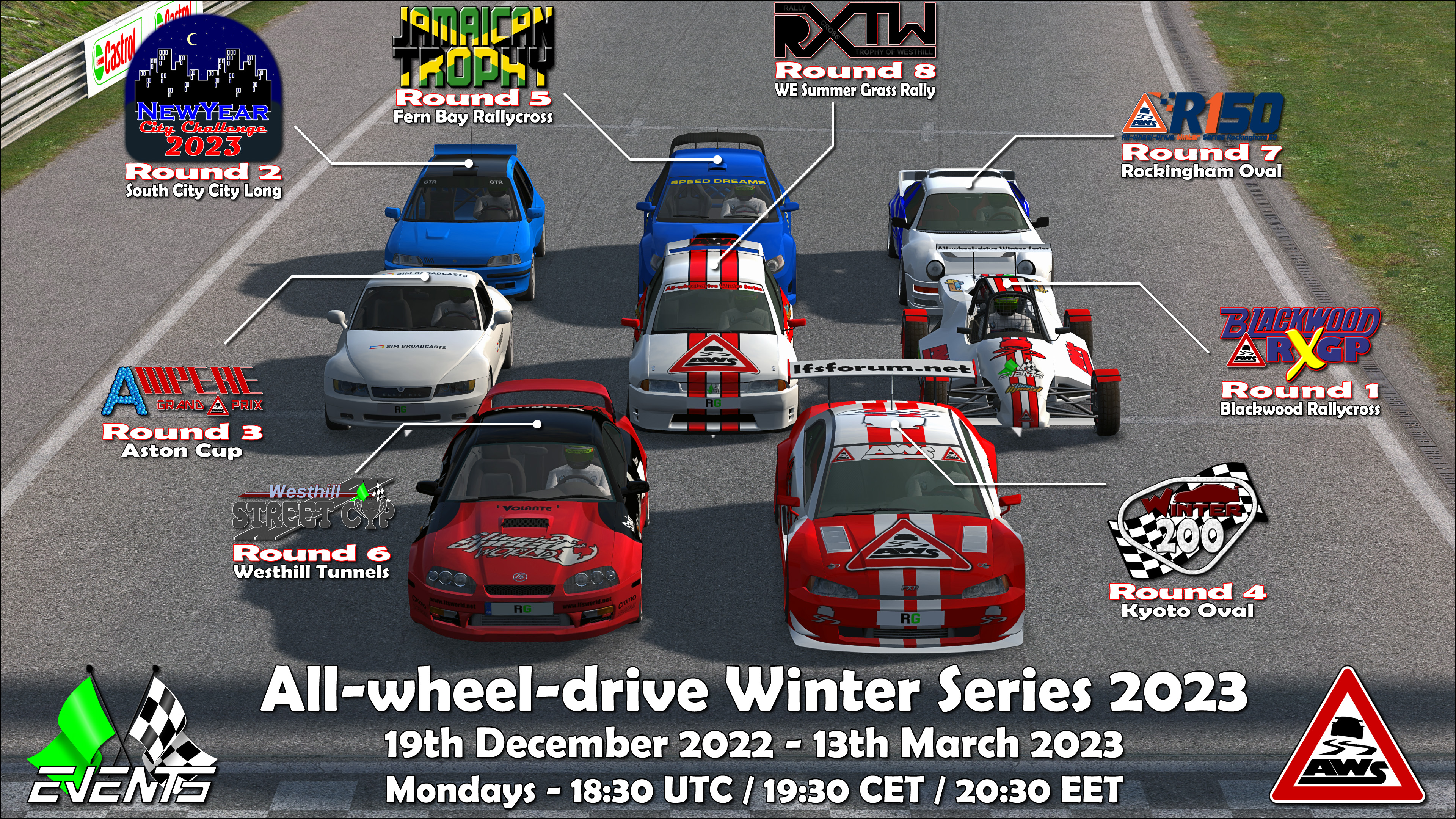 The Race Green Events winter league returns for it's 12th season with a big change - a total of 8 cars are now in the league's lineup. That includes both original LFS's AWD cars,the electric XFR introduced last year with a slight update for this year,a brand new league spec buggy derived from an already existing mod and 4 cars found on the files list for public use. The schedule is extended to 8 rounds returning the season length to original length of opening 2 seasons of the league. Since each car is now used just once in the season,both minor awards FXR Master and RB4 Master have been dropped,but there are still 3 other individual titles besides main drivers champion title and rookie of the year award. With quite variating performance and handling characteristics through the cars,this will become a true allrounders challenge to win the main title this season,where all cars are connected by a single technical aspect - they all provide it's power unit's power to all four wheels.


The 2023 season is almost 3 months long and will start 2 weeks before the actual year 2023 starts - season opens on 19th december in Blackwood,where the brand new Buggy 2000 will have it's inaugural race at Blackwood's Rallycross configuration in reversed direction. It will be the 1st ever open wheel and non-saloon car,and also 1st internal combustion engine car without turbocharger in league's history. As always the 1st round of the new year is at South City,where the compact AWD GTR car PZG will be used around environment's longest configuration City Long. This car is very agile due it's low weight,slick tyres and downforce,so it will be a proper workout even if it has "just" 275 HP. The 1st electric powered car of the season will be BZ30 Roadster,run in Aston's custom configuration known under name Cup. The 280kW roadster is not really a lighweight as it carries battery for over 20 minutes of high paced racing,but with help of slicks it will be still quite quick through turns. The first half of the season will conclude with the only round that's unchanged through all 12 seasons of AWS - FXR run at Kyoto oval has always been an unpredictible spectacle for 200 kilometers.

Second half of the season starts again in one of the standard rallycross tracks - this time it's Fern Bay's version of RX track,where the RS1 Kenji will make it's debuth in RGE league racing. The powerful machine will torture it's tyres to glowing,even if assisted by minor downforce through turns. A somewhat more classic round will continue after visit in Jamaica - our well known RB4 will make it's 7th appearance in Westhill's support roads,this time it's the better known Tunnels configuration on the menu. Round 7 is the 2nd oval round of the season - it's a return of Rockingham 150,which used to be run with RB4. This year it's substituted by a car that was originally created to be a rally car - Fraud Wheeler E2,the midengined coupe is not much different from RB4 in terms of performance,but for this race it will have assistance of slick tyres. The season finale will be held at same combination as last year's opening round and most attendend round - the electrified XFR lost a bit of power,but gained additional 1/3 of the battery to extend it's range,still each of two races will require some power management to avoid lengthy recharge.


Once again AWS will be held on mondays with gap of 2 weeks between it's rounds,with exeption for 2 rounds,which will be run just a single week after previous round - both standard LFS cars are deemed to be well known and won't require this much preperation. S2 licenced users will be eligible to participate just in 2 rounds now,as other 6 are run with mod cars requiring S3 licence. Again best few racers will be awarded with small money prizes,unfortunatelly due weird Paypal algorithms/politics we're not able to offer prize payout through this platform anymore.