Race Green Events will start the 8th season of it's longest running championship,money prizes at stake once again besides the battle for 6 individual titles,a teams title and nations title. 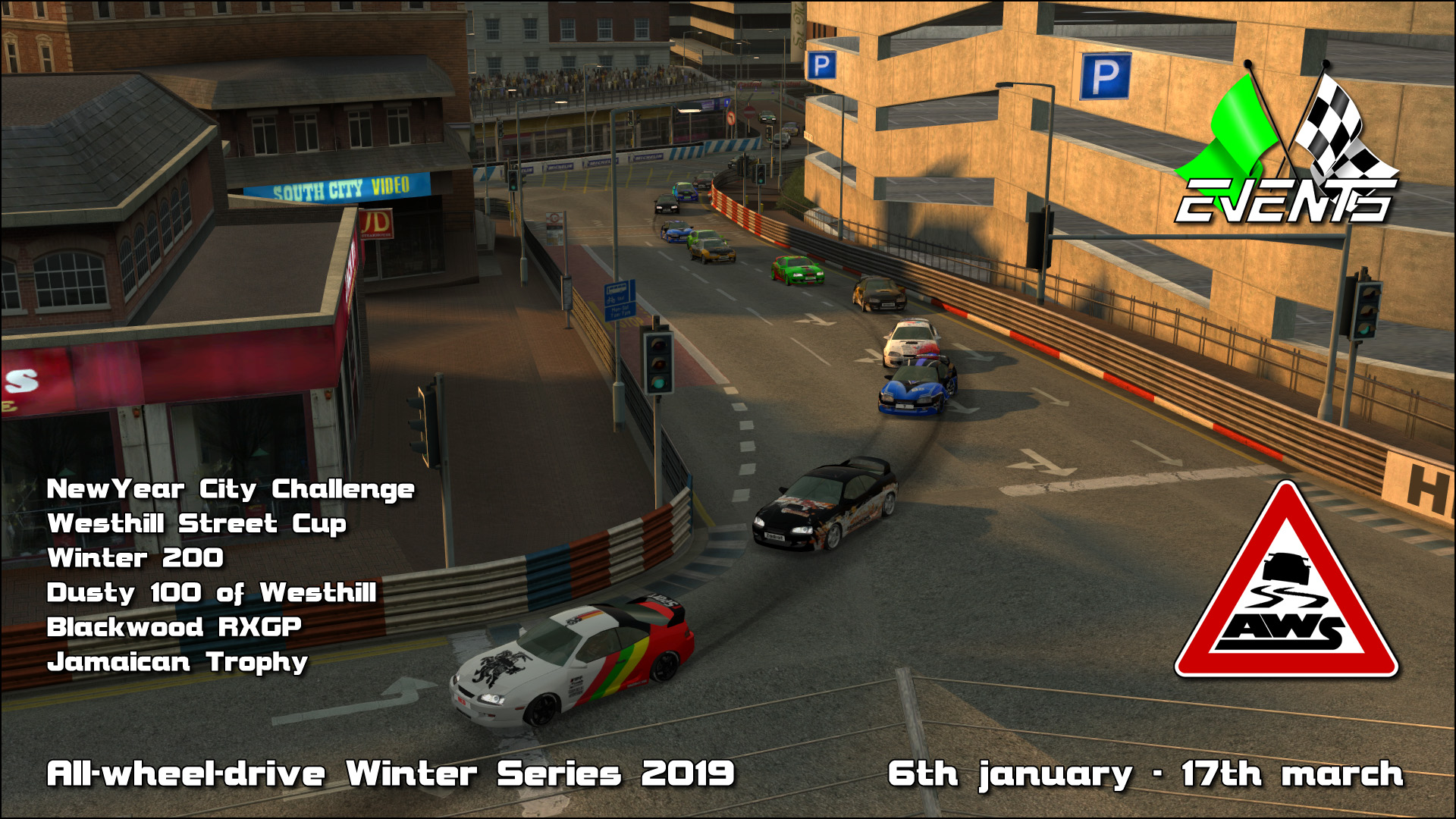 As everyone can read from the league name All-wheel-drive Winter Series,it's a league run in winter and using both LFS's AWD cars. The season will consist of 6 rounds,where each car will be used in 3 of them. As always AWS does not feature only standart road course racing,various different tracks awaits their challengers.

Like many times,the season will start in South City with NewYear City Challenge,a round run in darkest possible lighting conditions,this season FXR will return for this round using the short configuration named Classic. Round 2 might be called "back to roots" - standart spec cars will be raced on public roads. Even if the track for Westhill Street Cup partially consists of actual racetrack,the public roads part will be the one to seperate gems from stones - a long,curved two lane road with elevations and many many trees aside might keep even the skilled ones from finishing the race.

The middle third of the season will consist from ovals,which brings the Oval Trophy back after one year absence. First comes the fastest track of LFS - Kyoto Ring Oval will feature the traditional Winter 200,a 200 kilometer race with the FXR. This is a race where noone will prefer to stay alone on track as 2 cars can travel faster than one. After high speeds and plenty of grip,the other and completely different oval race follows. The brand new round Dusty 100 of Westhill will feature a 600 meters long oval layed out in the grass section within infield of Westhill's permanent racetrack. 100 laps will require a fair amount of mental endurance,keeping the car sideways during turns will not an option,it will be necessary to keep up with the best.

The final third of the season will feature 2 rounds which both used to be rallycross rounds. But only one of them will keep it's traditions - the Blackwood RXGP,not run only once during league's 8 years long history. Running slick tyres equiped FXR in rallycross might not sound appropriate for many racers,but the combo of these has proved itself to be a great test of skills. And this is the round which actually brought the idea of AWS to life. Season finale,which hopefully will bring us the final fight for championship,will be Jamaican Trophy - Fern Bay will host this race in very classic Gold configuration,run with RB4.

7 previous seasons have brought 7 different champions in the main championship,representing 4 nations from Baltic sea region. Will this be the 1st season having an outsider champion? Or will this be the 1st season with returning series champion? After 5 years of dominance,Lithuania has thrown Latvia of nations throne and kept it for last 2 years - will any changes happen here? All these and few other questions will be answered in next two and a half months in AWS2019. Everyone can add up their effort to influence the outcome of these questions in their favour by taking the challenge and participating in the league - signups are already open in AWS2019 thread in forum.