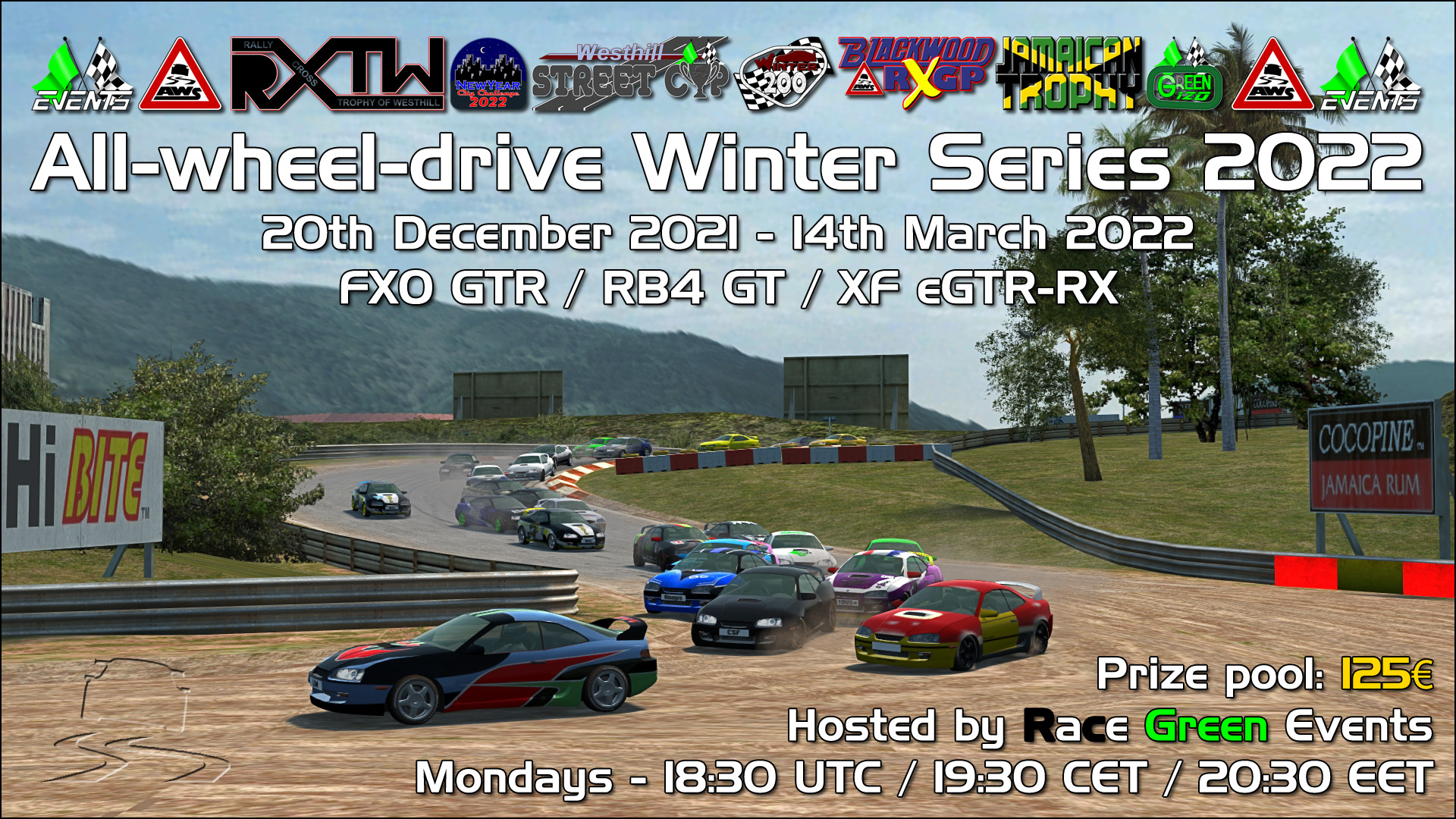 The eleventh season of the yearly winter league starts in the dawn of new LFS era - the one with custom cars available besides original LFS cars. Since the modding scene still is just starting to launch their creations,this AWS season will feature just one custom car,which is a "house own modified" XF GTR - to offer something different besides the usual 2 cars,we electrified the XFR and gave it an all-wheel-drive drivetrain to fit in the league. The addition of an electric car alse gave the chance to create a new award - Megawatt Award,which will be awarded to driver scoring most points in rounds using electric cars,which is a brand new challenge as the battery capacity does not allow to race full distance without pitting - challenge will require to find best compromise between pace and energy management. The schedule has been extended to 7 rounds for this season,3 will feature the well known FXR,2 each - RB4 and the new XF eGTR-RX (currently carrying the abbreviation XFE). Also this year Race Green Events offers small money prizes to the best 5 drivers for their efforts during the season!

The 7 round season will start with the new car and return of an old round that was last featured 5 years ago - RX Trophy of Westhill,which will be run on a track created by Mazdaratie - Summer Grass Rally,with small edits by RGE. Round 2 is one of 2 rounds that have been in schedule in all previous AWS seasons - NewYear City Challenge,which this time will be run on configuration never run before in this league,the Chicane Route in default direction with FXR. First appearance of RB4 this season will be round 3 - Westhill Street Cup will be run on the brand new West Street Course,layed out on the north-west part of Westhill Raceway's support roads. The middle round this year will be the usual season finale - fastest round of the schedule and the only round that has never been changed through whole existance of the series - Winter 200,run as always with FXR. Round 5 will be the 2nd electrified round - the new XFE will substitute the usual FXR for the Blackwood RXGP,run in Blackwoods standard RX track. The Jamaican island welcomes AWS racers in the 6th round,which will feature the 7.57 kilometer long Black XL configuration,where few parts of the track have dirt surface. Season finale will be held on the 600 meter dirt oval featured 2 years ago,this year instead of RB4 it will be run with the powerful FXR,which this year is awailable with the "right" tyres - the distance has been increased to 120 laps and round is renamed to simple "Green 120".

Series returned to mondays last year and it will stay in this weekday also for this season - qualifying of each event will start on 18:30 UTC. Season will start already in 20th december of the old year and return after every 2 weeks until the middle of march. Racing in this league will require installation of test patch (until official patch comes out) and S3 licence to be able to race in all 7 rounds (S2 is enough for 5 rounds that do not feature the XFE,S1 - in 6th round).