While ago, I was given a script by Bass-Driver after he'd been on my server, that showed, when you were spec'd, the drift scores for drivers on track.

The script sort of worked, and then I tried to make it work better, but I just made it worse. But because I didn't keep backup of original script, and just kept amending it, no idea what and where I made changes. 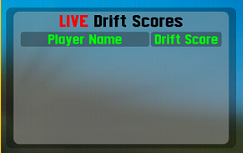 I'd have liked to show screenshot of panel with names and scores, but a lot of my old images have somehow become corrupted (Paint cannot read this file...).

The script does show names of drivers on track, and scores, but there are issues when more than 1 driver, and problems when scores reset to zero.

Unfortunately, at the time I was using it, I could never manage to record on screen action, and see where and how errors were happening.

Really needs some tame drifters to be on your server to do their stuff while watching what's happening with the panel. I don't have any tame anybody's!

Anyone get this to work better than it does?
Yisc[NL]

Forgive me for asking and maybe being a bit harsh, but what do you expect now?
Someone gave you a script to help you, then you start changing it and made it worse, while alsno not making sure you kept a clean copy or at least track of what you did.
Now you put it out here again with the mention of some things that are probably not working like they should but that's all the info you are giving and then expecting people to help you?
What have you tried to solve the issues that are probably there?
Are there errors to share?
Have you done proper debugging on the script?

This is not a stab only at you, but a general annoyance when people come here and ask for help, while not showing any efforts made.
Sometimes the question/problem is interesting and then I start to look into it without questions asked.
Often I come up with answers or even a script or improved script.
Then you get "thank you" and people bugger off, while I have spent hours on it.
Okay, that's my choice to do that, but I also have the feeling that people have no idea how much time and effort it takes to come up with good scripts.
Rant over now

Forgive me for asking and maybe being a bit harsh, but what do you expect now?
I don't understand the code and was hoping someone else did

Someone gave you a script to help you, then you start changing it and made it worse, while also not making sure you kept a clean copy or at least track of what you did.
At one time, I had a 1Tb WD Passport drive that I had lots of things saved on. I especially bought it for keeping all my digital photos going back to the ones of my kids and family I took on my 1st every digital camera. A 3 megapixel Kodak in 2005. I also saved hundreds of family photos (going back to the 1940's) I digitised, and tried cleaning up, getting rid of spots, stains and creases. I also saved every backup of every lapper online server folder I used (different folder for different tracks and layouts) going way back to 500Servers.

One day I tried to do another backup, and all I got for my troubles was scrunch scrunch scrunch noises. Not everything lost, I thought, as I'd given my sister a 400GB IDE drive with some of my same stuff on it. When I fitted that, Windows couldn't do anything with it. Couldn't repair it. Neither could anything else I tried for fixing drives. Now, especially thanks to Google Photos, I've only backups for last 5 years of photos, along with couple of last layout servers I had. I can't afford to get multiple backup drives, nor paid online storage, although I do use Dropbox and Google free options.

Now you put it out here again with the mention of some things that are probably not working like they should but that's all the info you are giving and then expecting people to help you?
For quite a few years now, I've only done 1 lap hotlap racing on my servers, and its very rare for more than 1 person to be on the server at once. Especially when I'm also on the server. Most often, if I'm on server with someone else, they're asking for advice, sets, etc, which I provide. Usually little time for recording on screen stuff (which I've only recently thought to do).

What have you tried to solve the issues that are probably there?
Using my failing memory (and it is truly failing) to try remember what was happening. But mainly, I see some stuff working so I have left it to run as currently is. I mainly see issues when 2 other drivers on server at same time, but that was actually a rarity.

Are there errors to share?
None. I haven't had a server in over a year, haven't recorded anything when I did have one, and someone was on layout.

Have you done proper debugging on the script?
No. Most of my scripts are simple. Open a button (hopefully in the right place), then close button when not required.

...I also have the feeling that people have no idea how much time and effort it takes to come up with good scripts.
But I do.

I've spent lots of time making scripts and AutoX layouts. Majority of which I give away.

I recently spent over 20 hours updating a Touge layout I made few years back and had made available here on the forum. When I had finished the update, I uploaded the finished layout.

I've recently rented a server, but as I wasn't sure if it would come preloaded with the newest version (V7) of lapper, so I tried updating everything that worked in V6 but wouldn't work in V7. Mainly my Top and Drift tables, which worked exactly as they should have in V6. I spent full working days trying to get things to work, and when they wouldn't, I asked for help. But I did put in the effort, and showed some of the code I had tried.

So when someone does donate software I can use, or helps with issues I'm having, I am grateful. And I say so. And sometimes, in some of my posts, I acknowledge it - like your pitboard.

I realise I'm the cause of your recent rant, and I do apologise.

And I do understand.

No idea how many times I've thought 'what?' when people post things with a title like "Help me".

I've long thought about opening a post on the general part of the forum with just a question mark, and some text along the line of 'Curious to see if this is smallest question that can be used as post title', then seeing how many people read it.

Anyway, in reply to your post, and in my defense, I plead guilty.
Yisc[NL]

I feel a bit guilty as well, as you sure are not the random guy that comes here, ask for something and then go away.
You did your fair share of contributions to Lapper and to try and help others, so I have to make an apoligy as well towards you.
Tomorrow I will load the script and see what it does and if there are any obvious flaws/issues I can work on.
I am not a drifter or have never attempted to drift either, so the actual output of the script won't mean a thing to me and if there are issues that only happen when more people are on a server, then it will be hard to debug things on my own, but I will see how far I can get and will post again here.
Bass-Driver

Thanks for still using the script i made.
i'll check my backups, if i can find the original script.
Bass-Driver

Yaay,
Found the orginal script in my mail that i've sent to Sinanju in march 2017.