So I wanted to test the latest build, with my latest VR Headset , HP Reverb G2.

And the image is skewed only in 3D, in the windows it's ok.

By closing alternatively my left and right eye, I found out that the left Eye aspect ratio is ok, but the right eye aspect ratio is wrong, it's like 5/3, if left is 1/1. ( Objects in Right eyes appears wider than in left eyes )
The result is the image is skewed horizontally.
For example, the menu doesn't appear as if I was facing a rectangle. Even after resetting the position it appears like I am looking it from the side.
In the diagram I did, everything appears like on the right ( red ) instead of left ( green ). 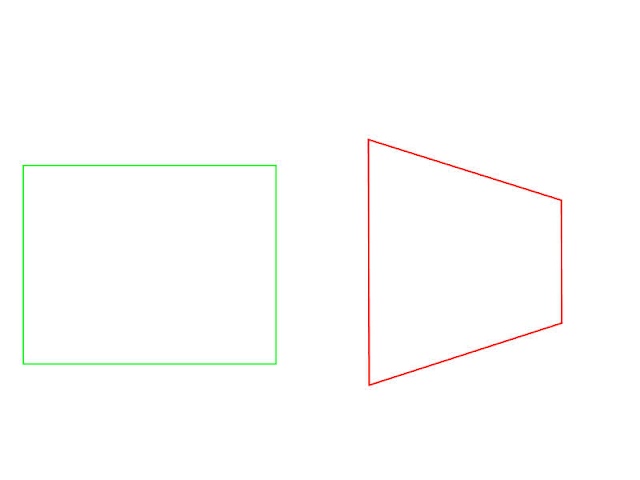 At this point I think It's a real bug.

Before running LFS , I launch SteamVR, and close any other application.

Did a screenshot of the mirror windows, and they are correct.
It's only in the headset that there's a problem with the right eye image 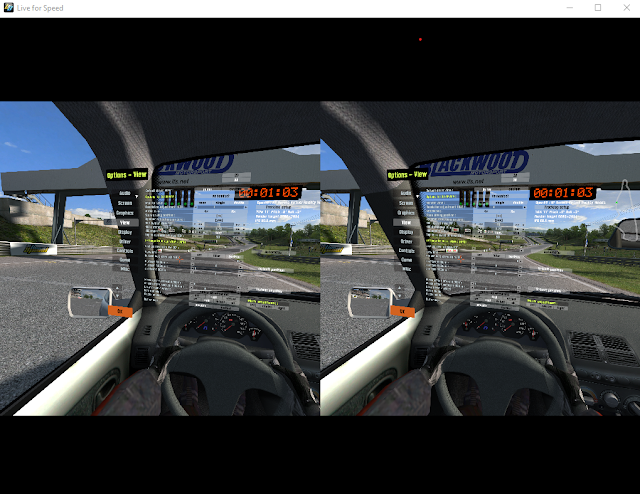 I'm not sure there's much more LFS can do as it seems to be generating the image correctly, as seen in your screenshot.

I see something that might be relevant here: (search for 'stretched')
https://support.hp.com/gb-en/document/c06984162

The only thing I can think of to try at this point is to make sure "Resolution adjustment" in LFS is down to 100%, so it goes with the recommended render target size.
MagicFr

It's correct in the mirror but NOT in the headset.
And only LFS is doing this I have no other game doing it
- I played Alyx, Elite Dangerous, iRacing , AMS2, rFactor2, AC, ACC, etc..
I used SS an all those game from 75% to 125% with no issue, so I guess LFS doesn't use the correct one.
I will try playing with the LFS Resolution slider tomorrow.

It's just strange because LFS works properly in all other headsets and as you can see it is rendering the image correctly. I can't really explain with WMR is taking that image and projecting it wrongly, on that one headset when all others work fine.

I wouldn't even know how to begin. It may be a good idea to ask their tech support. I know you probably won't get a reply, but I am struggling to know how I can fix a bug unique to a single headset that I don't have.
MagicFr

Man I feel you :/
loopingz

Around 98 I had my first printer, a HP... It was a good printer but the paper feeding was badly designed. And there was an angle on most prints... Of course there was no review about neither any fix... I have been careful avoiding them ever since!

Damn that sucks I hope you manage soon.
Scawen

Continuing the off topic, I have a super HP printer which is a monochrome laser printer. It has kept going for 15 years so far, never needed a new cartridge. Obviously don't use it much but as it doesn't have ink, it doesn't dry up and get stuck. Before that I had an awful colour Epson which drank ink like hell and then broke down. So in my case I will never buy an Epson.

Hmm, I have to say it looks to me like some kind of bug in WMR. You know I don't run away from bugs but this is different. Specially as Microsoft is involved, it seems likely to have bugs. Though of course is could be in the HP software too.

LFS goes though OpenVR and has been working correctly for a long time. Now a new headset comes out and Microsoft has something to do with the interface, if I understand correctly, and now it doesn't work in one particular headset.

From your screenshot, you already show that LFS is generating the correct image. But some part of the interface or driver software is not projecting that correctly onto the final screen.

I think the best thing would be to ask HP or Microsoft if they can recognise the problem. Maybe their software makes certain assumptions. For example do they assume each eye's view is rendered onto a different texture? Some programs do that, but LFS renders both eyes onto a single texture (left and right side) which is allowed by the specification.

I'm not saying that's the problem, I'm just making the point that some programs may do things in a slightly different way and maybe their software assumes one way.

One more thing we could do, if you would post the OpenVR.log here I could have a quick look in there and see if anything looks strange.
MagicFr

well, you know I am a game dev too

So for me it's simple, the only game which I have this bug is LFS.
I play many games that are using OpenVR ( iRacing, AMS2, rF2, AC, ACC via UE4 , DCS, Elite Dangerous ,etc.. ) with absolutely no issues.

So IMHO, LFS is doing something wrong, that is not an issue with other headset but not with HP Reverb G2.

You already know what HP or Microsoft are going to say, it works on all my games except LFS, hence... it's an LFS problem.
And I don't want to play the ping-pong ball.

Don't worry also as a Game dev myself I 100% understand you cannot fix if you can't repro yourself.

It's ok, to be honest, I do like to play some rallyX in LFS, but I can live without it.
Scawen

Yeah but if LFS works with 100% of VR headsets except yours, what can I think?

LFS isn't responsible for what happens to the image, after submitting it to OpenVR. It cannot influence that in any way. You've already posted a screenshot of the correctly rendered texture. That is what is submitted to the software. The software does what it wants with that.

LFS doesn't hook into the drivers after that point, so can't affect the way the submitted render target is presented to the VR screens.

bberger reports a scale issue with Reverb G2, he says the vertical FOV seems wrong. He doesn't have the problem you describe.
https://www.lfs.net/forum/thread/94919
MagicFr

Thing is, they could run it in the debugger and have the answer in minutes. They can use the demo version, it's all there and ready for testing.
Scawen

Hi Magic, I've been talking with HP support on Twitter. I got this request and I wonder if you could provide the requested information about your computer.

Also please can you post the OpenVR.log from your LFS folder as it has some info about initialisation and texture sizes.
MagicFr

Wow, Thanks a lot Scawen for your dedication, I hope I am not wasting your time but here it is :

For software I always keep up to date

edit : in openVR.log
Recommended RT size: 6320 x 3092
which seems correct from SteamVR 100% resolution per eye , I am pretty sure you already know the render resolution is higher than the headset resolution because of the cushion lenses correction that happen between the game rendering and the actual display.

Anyway thanks A LOT for your time, honnestly I wouldn't be mad at all if you wouldn't spend time for only 1 user.
Scawen

Thanks for the info, Magic. I've passed it on.

I just want to make sure LFS works well with every headset if possible. I've put so much effort into it in the past, that's why I'm hoping to resolve this mysterious issue.

So I don't consider it really just for 1 user. Although judging by my main forum post, apparently the G2 is not a commonly used headset.

G2 is the new hype. I guess more people will have this one little by little. Hard to get, expensive very high res, it is a top choice for flight sims. For racing it could have better fov and for gaming it could better controllers. I am happy with my index...

Off topic, for casual printers black and white laser are the way to go.
Scawen

Recently acquired one. I’ll test it soon in LFS and report back.
Fat-Alfie

I have something similar, using a Samsung Odyssey+ WMR headset, and it makes LFS unplayable in VR

If I close my right eye and move my head around, the left view appears to be okay - it moves slightly as I would expect it to.

Up/down movement is fine through both eyes.

The image in the right eye may be slight stretched side-to-side, too.

This is a new issue as I tried LFS when I first got my Odyssey+ (about a year ago) and was blown away by the quality of the image. Now, trying to play just makes me feel sick. Some bit of software has changed between now and then

Yes, I have that patch installed, and it doesn't make any difference for me

VR view of both eyes at once doesn't show anything strange, either directly from LFS or from Steam VR. I have tried various experiements (looking left, looking right, tilting my head both directions) and then overlaying the left eye over the right eye in Photoshop, and it appears to be outputting the correct view to the VR View screen.

I don't really know how to capture the effect I am seeing (and it is only the right eye that is wrong). All I can do is describe what I see through my right eye. It's as if the screen has a central pivot point, and the direction I look controls how the screen pivots. Look to the right and the RHS of the screen gets closer / LHS of the screen moves further away, and vice versa.

-EDIT- I have just noticed that if I increase Vertical Field of View to 100 the strange movement of the right eye is fixed, but now the left eye is behaving strangely (almost like the opposite of how the right eye looked).