Fantastic, I can enjoy LFS again. No more jagged FFB on my DD (Simucube1, small MiGe, biss-C encoder). I was in fact asking about it HERE some time ago. Thank you Scawen.

And, if I may, a question that seems to be popular these days:
How many contact points does the tyre<>ground contact patch use in LFS for physics calculations ? One or more ? I am asking because there is quite some jolt when hitting a kerb a bit stronger.
Flotch

PS : I do not even find where it has been taken

Blackwood, second corner. That track has been around for quite some time, you know 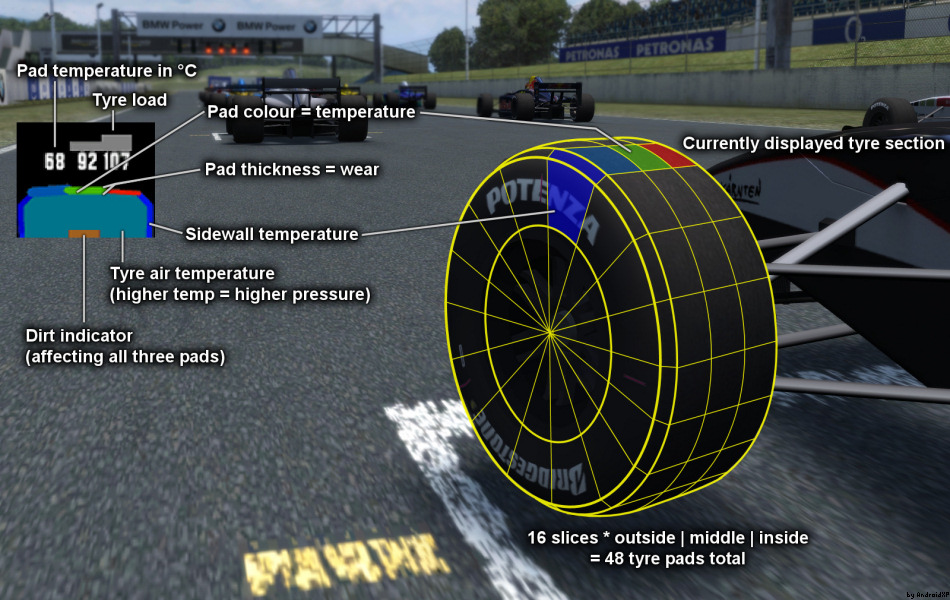 The difference in FFB is pretty big, even on my budget 90-degree Formula Force EX wheel. It feels more smoothly now, especially noticeable on FZ5, before it was pretty harsh and hard to control.

Also, is there any way to set the virtual wheel to turn only 90 degrees? I always drive with virtual wheel disabled, because it turns more than a physical wheel
Pasci

So G27 users don't need to change the (default) values, because you provide at least for this wheel the right settings, correct?

Thanks for that fix/improvment - Will try it this evening.

BTW: A (short) progress report would be nice. ;-) I hope everything goes as expected.
F.C.Barcelona

I just saw that there is a new exponentiality control for the pedals but it affects at same time to three pedals. In my case I use a load cell brake that is exponential itself so I cannot use the new control for the other pedals because it greatly distorts the brake control.

The control "centre reduction" must to be individual for each pedal.
w126

It's probably not that. The question was about contact points, that is how the game checks if a given wheel touches the road or other objects, and at which point(s). There are probably only 2 contact points per wheel.
https://youtu.be/A3Ue0w6b33A?t=70
Xenix74

It feels very easily defined to me. Especially the flat curbs are now better to feel. But even in the drift I had the feeling easier to find the balance. When you are in the drift and the vehicle is still rocking slightly ... I notice it most clearly.
For me .... that's a great patch.

Help? Yes. Answer ? No. Not without additional information

. This might be the way the tyre is represented but pretty sure not what the physics calculations take into account.
Racon

Joined : Mon, 25 Dec 2006 11:53
Posts : 1272
Online at :
PiranMOTODestructionDerby
Scawen has said before that he calculates the size, shape and pressure of the contact patch, then does something on that shape in multiple passes to determine the grip ('brushing', IIRC).

I don't know how many individual points he uses in that stage (or even that he uses representative points at all), but, to address the original question, it's hard to imagine all that thoroughness ends with a model that doesn't respond to a contact patch straddling the boundary between two grip levels.
loopingz

OK quick test here, stable as usual.
FFB feels much better crispier and more detailed at low force and high force setting. I usually run at 20 or 25% in LFS to avoid breacking my wrists...
My wheel is custom with simucube not yet patched to the latest software by granite it stills run MMOS and shows, hardware is MIge 10015 with encoder 2500/rotation (I have gear to change to 5000):
MMos ForceFeedback2014 I went to 100Hz 10000 directly.

So far so very good.

Edit: Are some kerbs very different in Blackwood? Some inner kerbs are feeling ultra smooth maybe too much like the inner on the last right corner of BL1. On other I really feel all the little steps!
Last edited by loopingz, Wed, 24 Jul 2019 14:59.
Pasci

I'm not sure if I understood you correctly: That means that no higher fps then 100 should be needed now?

Yesterday I was driving with (limited) 60 fps. But on some positions on the track the "feeled" fps was very ugly (stucking and flickering picture) but the (LFS internal) fps counter was still at 60 fps. After change the fps limit to 120 fps (twice the refresh rate of the screens; don't know if that make sense :-) but it works), racing was flowly like before. Any idea whats going wrong here?
DjFIL

Thanks everyone for the feedback.


Yes, from the point of view of force feedback, no higher frame rate than 100 should make a difference.

Less than 100 fps will reduce the number of FF updates you get (because there is never more than one FF change per visual frame, which will be the case as long as LFS runs graphics and physics on the same thread) so going lower than 100 fps makes a difference that may be perceptible on the very high end wheels.


I didn't want to bother explaining how the old system worked, now that it has been deleted. But as people like to understand, here goes:

In the old system, there was some code that reduced the number of FF updates sent from LFS to the wheel drivers (to avoid overload which was a problem in the past, and may still be now, for some wheels) by making sure some number of frames had elapsed since the previous FF update. That number of frames depended on how different the current force was to the last force sent (more different, less frames needed to elapse). The relevant point is that it was related to a number of frames, so people discovered that having otherwise pointless frame rates like 1000 fps gave them more immediate force feedback. Now that code is gone, and you can set to allow 100 Hz FF updates, there is no need to use extremely high frame rates as you can't get higher then 100 Hz FF updates anyway.
Last edited by Scawen, Thu, 25 Jul 2019 08:10.
Racon

Little off-topic:
I don't know if its just me but every time I see a new post from Scawen I feel so excited and reading it with pleasure. ^^ Anyway I hope one day I can try a FFB wheel (for the first time) and probably gonna love LFS even more. Sorry for the off-topic.

Edit: With the new test patch it runs so much stable (no stuttering) especially with 50Hz/50fps vsync on. Can't wait for the separate physics / graphics threads.
Last edited by Evolution_R, Sat, 27 Jul 2019 09:32.
Lucas McFly

for some reason LFS stopped working for me, it crashes after a couple of seconds. I've updated the GeForce graphics driver yesterday, version 431.60, maybe that's why

I've had this without test patch, not sure what has caused it. but a computer reboot fixes it for me iirc.
F.C.Barcelona

It happened to me this afternoon too, the pedals stopped responding in lfs but still working in windows. Absolutely anormal thing is the first time that it happens in lfs. A restart has fixed it.
ACCAkut