Hello developers, I would like to return the conversation to the layout editor, I made a lot of layouts for servers and events for my time of the game and as an experienced in this regard, I thought it over carefully and I have several suggestions. On points on subjective opinion in order of importance if you do not mind)

1 - adjustment grip of the surface of concrete objects (for example using a slider) would be great if it was possible to do not only concrete objects but simply change the grip and make it as an example for asphalt (it is possible at the same time and changing the texture although it is not critical) would greatly diversify the already annoying all concrete tracks, which incidentally is a bit unnatural)

2 - I would like you to enter a selection of objects with a mouse, selecting with a square or by a area lika a brush (That you do not need to click on each object, sometimes you just explode when your selection accidentally gets lost when you click among the heap of objects 30 times) and removed this annoying restriction in 30 selected objects, this would greatly for speed-up the creation of layouts. 3 - New concrete objects, the main problem in concrete objects is now that you cant make a corner at the same time as uphill, you will get extremely unpleasant steps on which the car will jump, this introduces a huge restriction on making replicas of many tracks, and they can not be repeated smoothly (and I have this experience) I propose to make a new uphill object with a corner, with height sliders, the angle of rotation and the radius 4 - decrease the pitch of the parts, for example, when again we will make replicas for the trails with a step with 0.25 very large and this means that we can not make a smooth lift or a smooth descent, I think a step of 0.05 could correct the situation, or You can such a step keep in that way but allow the user to enter their own value to 0.01, this would be ideal. 5 - New concrete objects. It would be nice if it were possible to do not only triangles, but also do different circles objects (for example, with an size and ellipse slider, semicircles curved like springboards and scate ramps (with hight, length, angle of curve sliders), and the like that I showed in the picture, this would again simplify the creation of many things. 6 - More sliders for objects, I think the same concrete objects can be much more distorted, for example, for the wall to make thickness, for the Wedge of a separate change in size on the sides, and so on, there is no limit to fantasy, but it means a lot of space for the laymakers.

7 - Normal connection of concrete objects with the curvature of the tracks, will be better if concrete alaign with surface m like a Barrier or Speed hump (and if we can switch alaign mode), sometimes it is very uncomfortable but if it is difficult to fix, then it's not a big problem. 8 - Creating text objects, sometimes having to work to write something in objects in the editor, it would be great if this process could be simplified. Although this is not so important as the first points) 9 - More colors (or textures, or both) for concrete, maybe somebody will be against it (Do not make a minecraft from the autosimulator blablabla), but sometimes you just need to make the track look more like a real track, and simulate for example grass with objects (the green color does not exist) and so on. And the one who wants to see everywhere the minecraft they will build a minecraft, and they who needs realism, will build quality tracks.

10 - And as always, we want more number of objects available if it is a possible

And not editor actually thing, but players and laymakers always want to use as much space as possible to create tracks, because there are also rally events on the grass and drift events in the parkings and not all of them to do comfortably when in many places you cant drive because the getting under the texture on the open tracks configurations and would be great if it could be to correct

The first 5 points are the most important for me, the rest can close your eyes.. But I understand that you are now very busy merging the code of the two LFS builds, but if that makes sense and you could at least add something to do the easiest thing from the list it would be great

I really like your ideas to improve the editor. the track elements you have designed would fit into the game very well.

To get smooth transitions between objects, I think it would be better if there was a function that connects objects automatically, so that no unevenness occurs.

Furthermore, as you have already described, it would be helpful if objects would not only adapt to the road but also to the inclination and height of the placed track parts (good for building walls on ramps)
cargame.nl

Alright, well.. Don't know anything about the level of development difficulty of this. Some requests sound easy but in practice can be hard to implement, I am aware of this. I am just expressing my thoughts about what I came across when I tested this test patch.


This is already completed since R15;

Everything else is about changing the data fields of the object layout structure. Colors, giving degrees to corners, accuracy level of inclination .. This all would require a change in the way LFS would process lyt data because the bit depth of a layout object is not big enough to store this extra amount of variables.

Also the amount of additional objects is limited. Although some slots are still free. More info: https://www.lfs.net/programmer/lyt
delis

Please do not make this game like Trackmania with that many layout objects.

Don't get me wrong. I do like layouts in this game and driving those circuits are nice thing as well but there is a time when everything is too much.
Racon

Besides, there is LFS engine limit of going capable adding more stuff. That's the main reason why we have "only" these as we have now.

Requires to modify engine/code or expand it, but causes longer times to reload 'em.

Actually, whole thing about why this and that is completely explained by various people, including devs as well.

And on top of all this, it is suggested way before as 2007.
SergoMorello

I think the advanced editor is needed. This will help the community much easier and faster to create new layouts
Ped7g

I think this is more about track editor, than layout editor. I.e. it would be IMO better to have full modding support, and add such complex tract elements as new track. I think layouts should be kept simple, so you can download it in blink of eye even with vanilla LFS.
bender1996

This is a great idea! 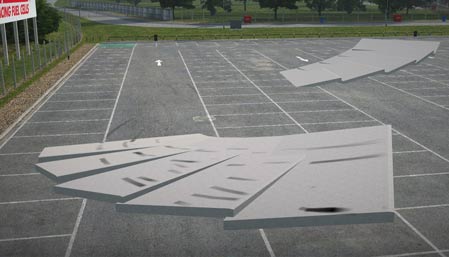 You can smooth them out a little by overlapping different gradients, like this: 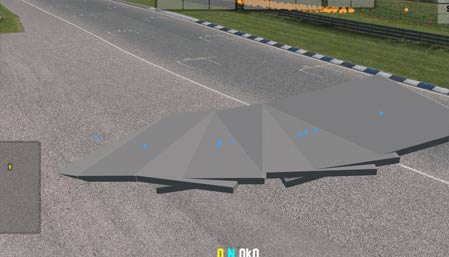 As told: New tracks are salt, but layout is spice.
Aleksandr_124rus

Believe me, I know all these ways of smoothing, and the best one of it is that I do regulary- 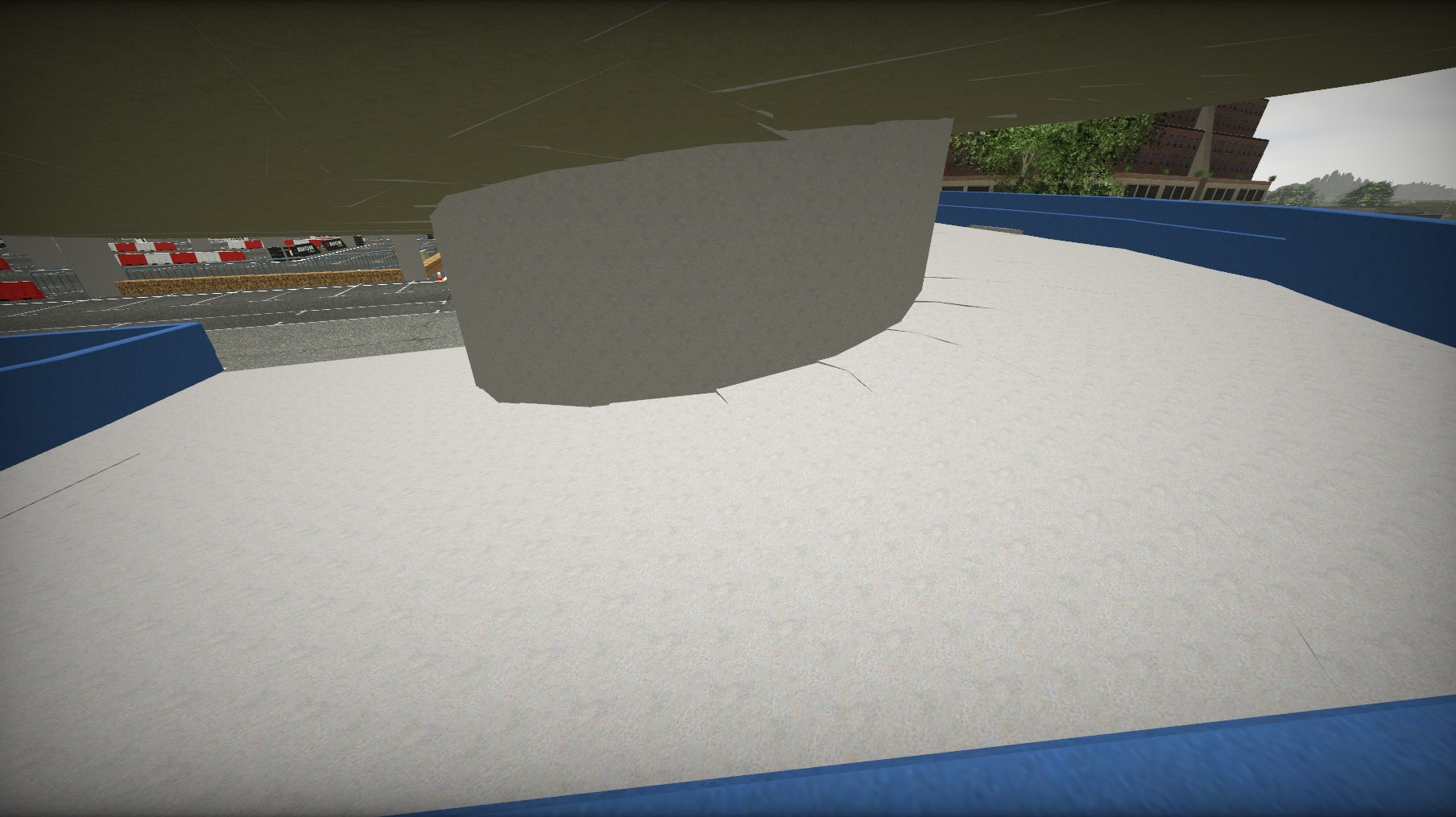 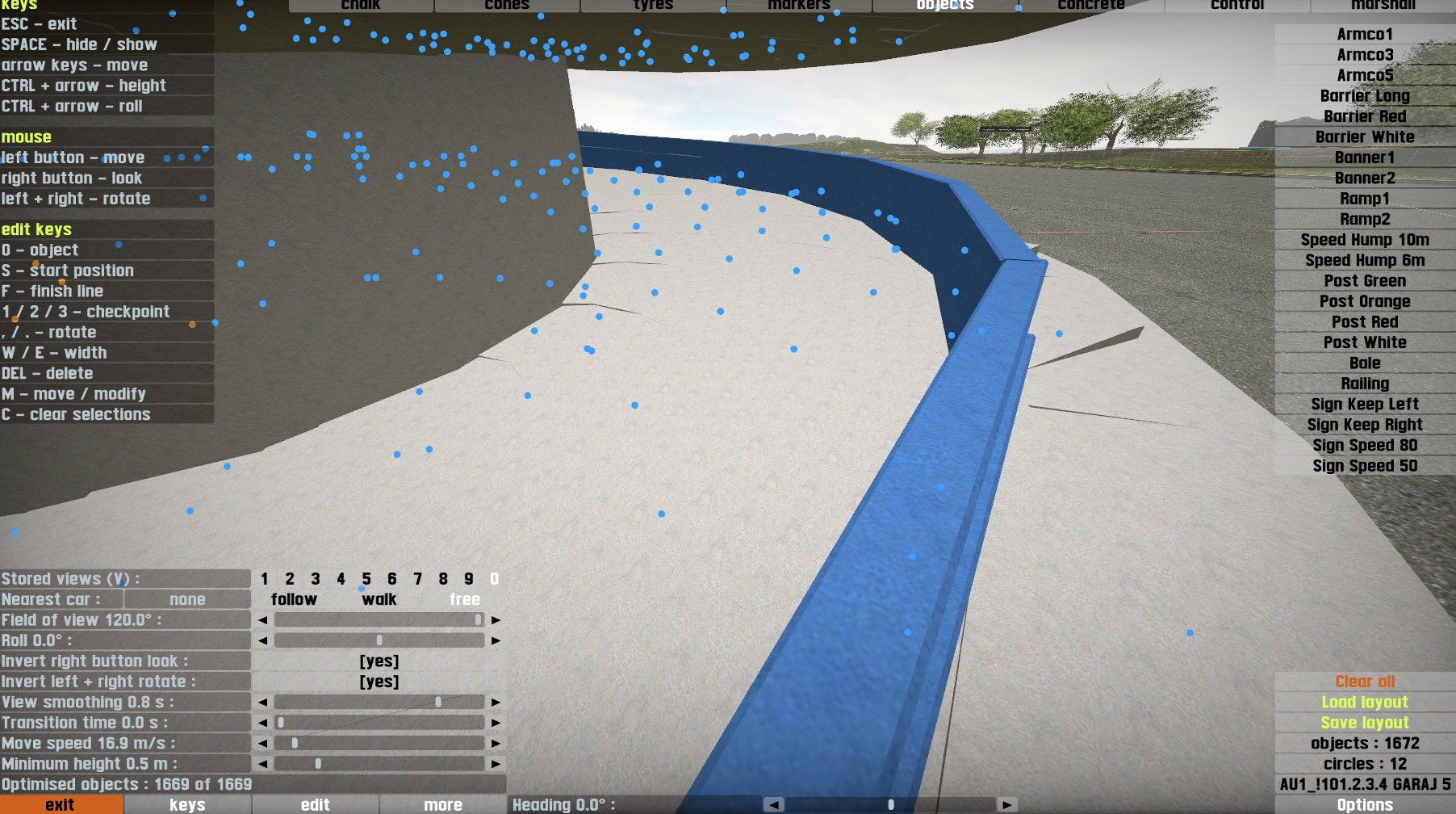 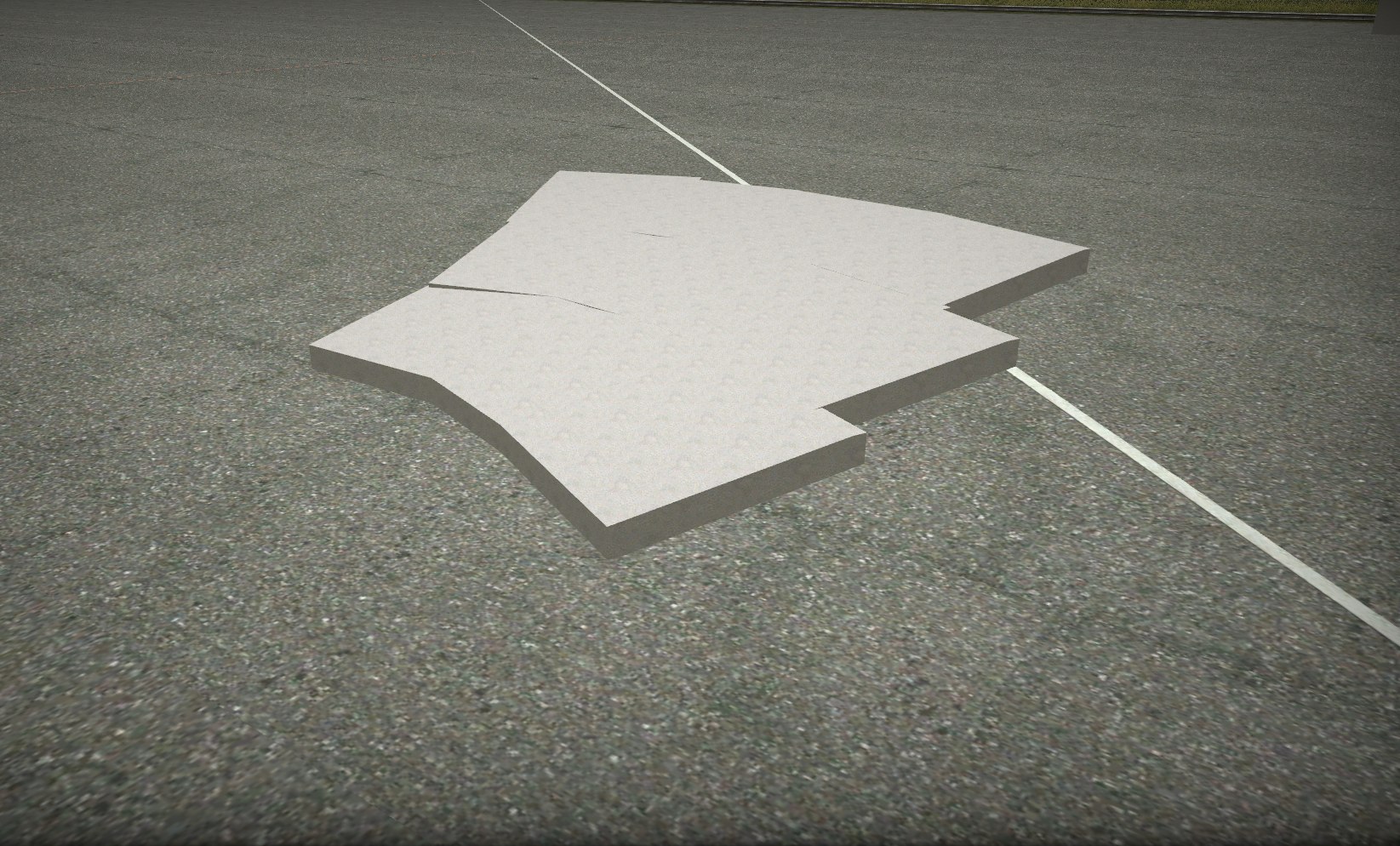 But all this means that you need to do a lot of objects and it will still not be completely smooth, so it will be easier and optimized for layouts just to have one object for it, as I showed in first comment. 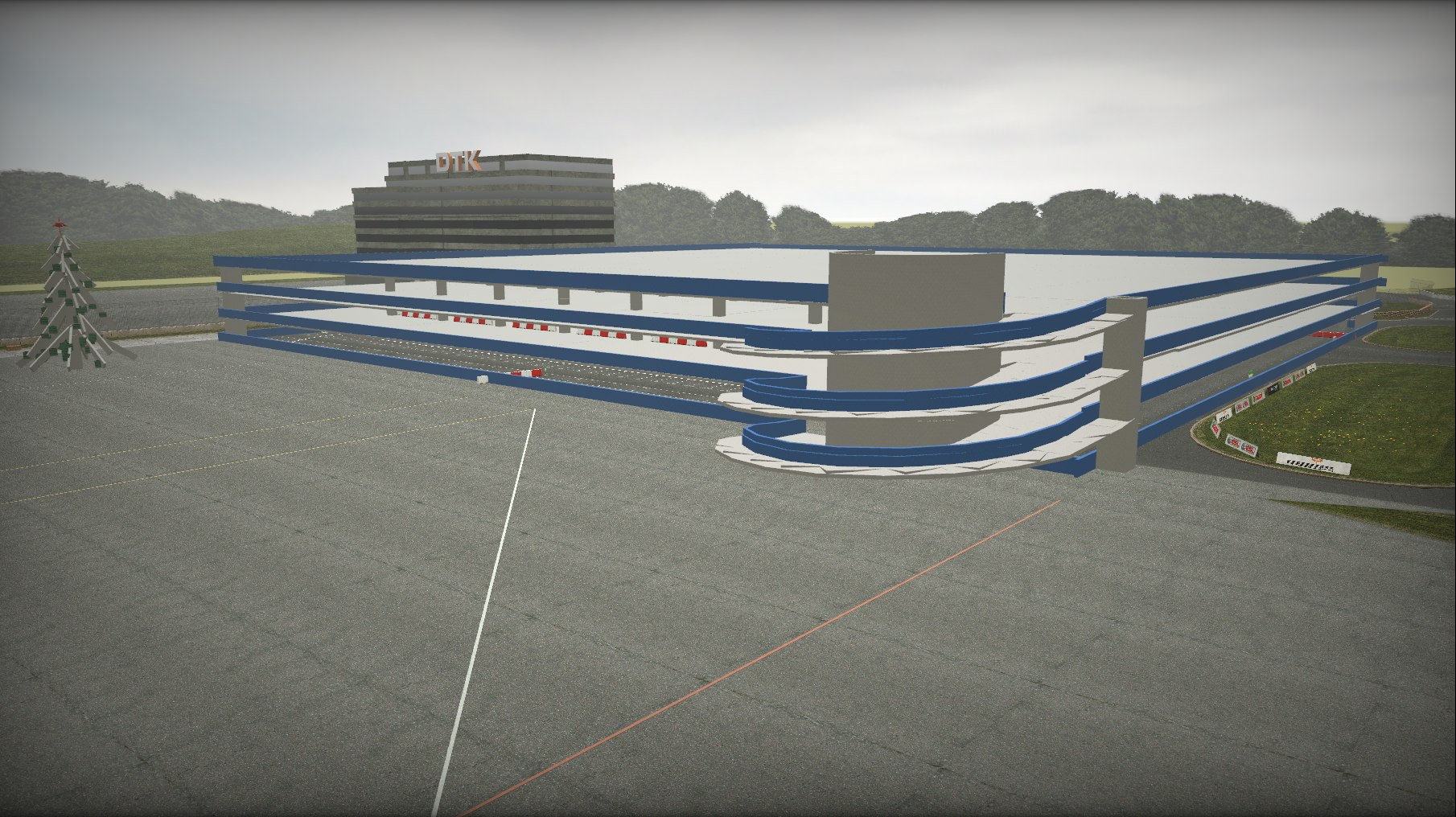 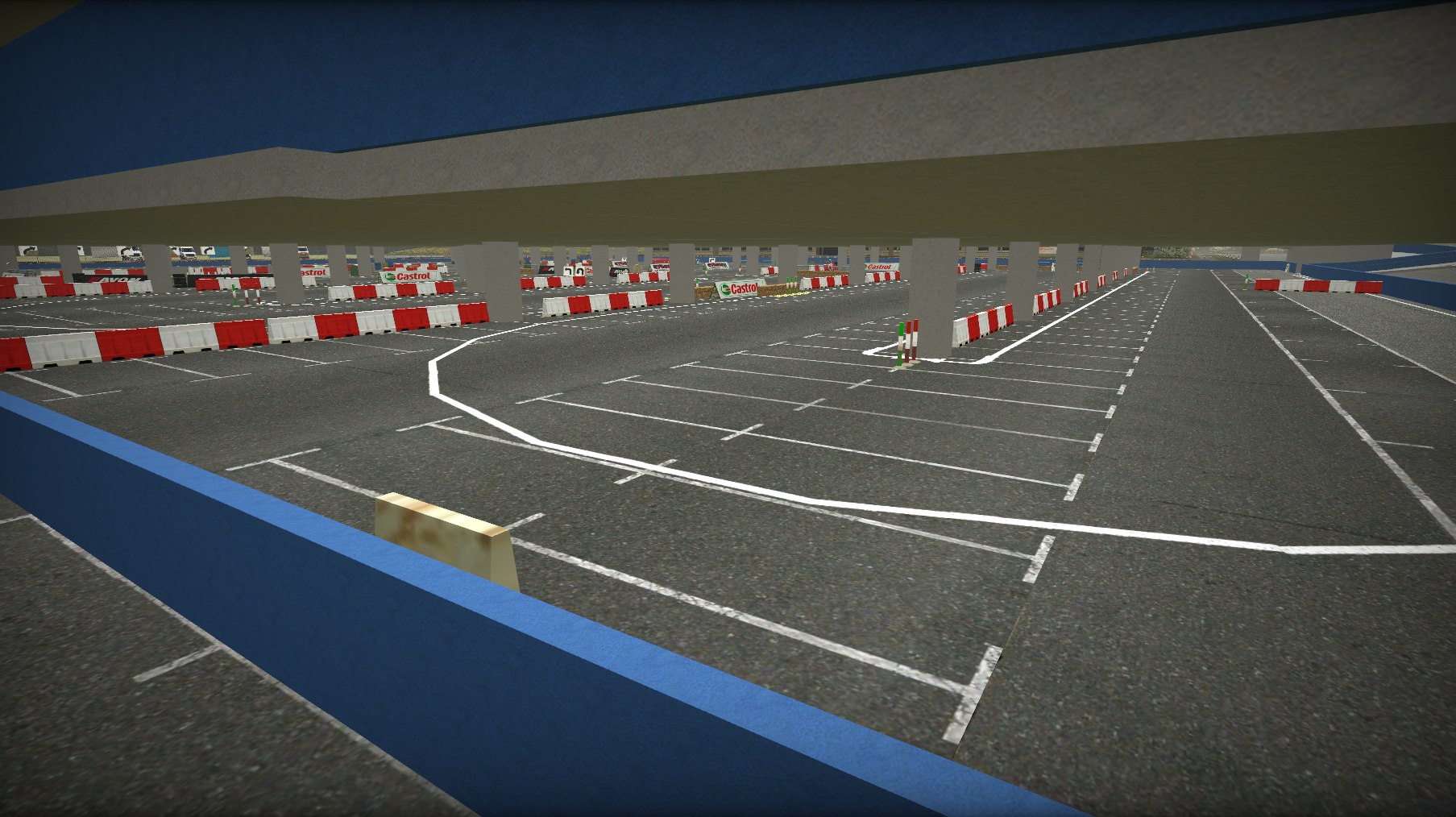 This is too big for this test patch though...
Racon

Ok, please, Scawen respond to me.

If LFS in future update will have other 'multiplayer' functions ?
for example ( iracing based on rating, and stable schedule )
Assetto got something similar to LFS, but still we dont have any tools that we can manage the race properly

for examples:
1. 1 lap qualifing
2. Safety Car
3. VSC
4. limitations for race -> on site/forum Race Director creates a 'race' and set date and time for the race (including name of host) then who wants to race, register to a race, and host in LFS only allows registered drivers to connect to a host.
5. Rolling start ( interface that will force driver to stay in classifide position to stay in it in formation lap / SC drives to pit, and then green flags.
6. Better Cameras for Streaming ( chosing best fights, depends of distance between cars, etc )

and much more, but this one is most urgent not only for me propably

Plus there are much more urgent things to do... There's no way Scawen can just give out details about future LFS, it's too dangerous. I wouldn't expect a fulfilling answer. I do believe that when the physics go out, LFS will enter a fun stage once again

You don't understand, this should be a game content, not an external program
Whiskey

Why?
I'd rather have a powerful API to implement whatever crazy idea than have a developer spend time in a game mode that will not be used by most people.

In an ideal situation, devs could release official apps serving as an example/tutorial as well as introducing desired features in the game.
Bila_KHS

Dear god, you are serious right now ? IT's a RACING game, not a criuse, or drifting one, of course there is lot of guys doing cruise or drift - but first of all this game should be for racing !

Quite interesting you opinion about that, but for me i would love to see more content stuff in LFS, and it should bring freshness to game, instead of a new graphic system.
Ped7g

It's not a game, it's a simulator.

And it's not clear what you mean by mentioning cruise or drifting, as the InSim is valid tool for ordinary races too, and it's much more powerful solution than having something limited and fixed in the LFS exe directly.

Let the core team focus on the simulation itself and extending the InSim capabilities, ~3/4 of stuff you requested can be already provided in league races with current LFS version, if somebody would dare to organize them and put enough effort into it.

And you are off-topic, please read the first post of this thread and TEST Forum Rules - READ THIS FIRST!!!.

By posting off-topic request you are (in the end) just slowing down development of LFS, there's whole forum section for improvements suggestions, and the devs are well aware of that.
1
2