Current public version updates WR data once a week. Of course I realize that is too slow regarding current situation when WRs are changing on hour basis so I increased frequency of updates to once a day (my version). You can always force update of WR data by going to LFSLazy window->Other->Options->Pubstats->Update WRs now, as shown in attachment.
oibatha

Oh, I forgot to mention that update from 26 and prior versions of LFSLazy is not possible using new LFS.
Just download new LFSLazy.exe from first post and replace old.

Previously InSim version was 5, so (already years ago) I checked when starting an InSim connection does the version match. Because with new LFS version has changed, LFSLazy simply exited with that error message. I realize now that this wasn't really a future proof solution therefore now LFSLazy will not immediately exit if unsupported version of InSim is detected, but offer an update if available.
lfsrm

also surprised that lfs dashboard on cars in related to insim things.
DANIEL-CRO

Editor is not something that many people use, but still its important to offer great experience for the ones using it. There is now "Open Folder" button that directly opens folder with textures for this car. All the gauges/texts/... buttons are much cleaner now. On top of each column there is name and settings for stuff that is turned off is disabled (dark). You can see how does it look on a picture below. 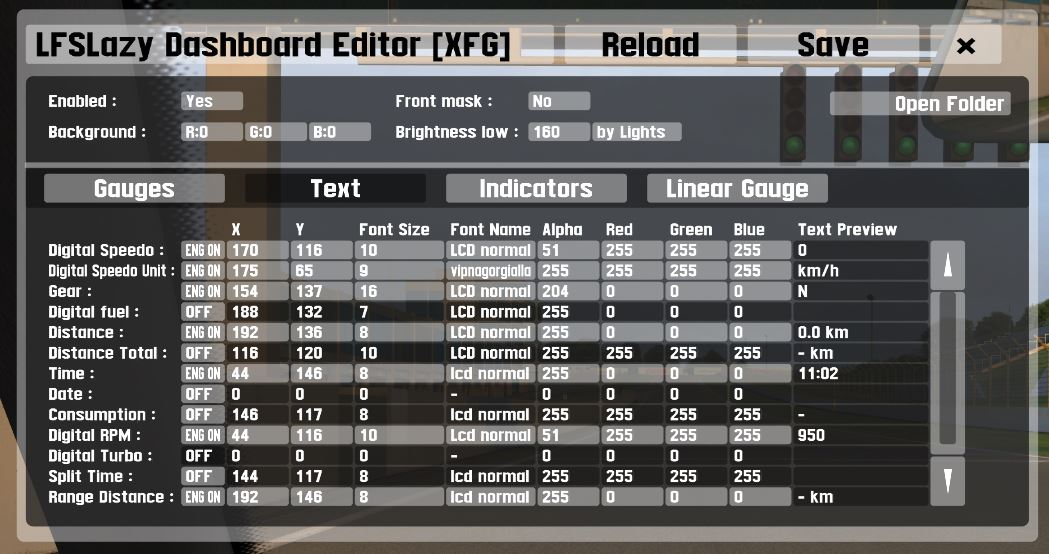 Car Menu
Previously there was only WR and PB shown. I've added username of the WR holder now below WR time as well as little dots above car name. These dots represent current car usage on server, total number of dots is the number of cars in race, and number of white dots is number of specific car in race (e.g. XFG). Also LFSLazy will not draw WR/PB for cars that are disabled on server (according to LFSW). Preview below. 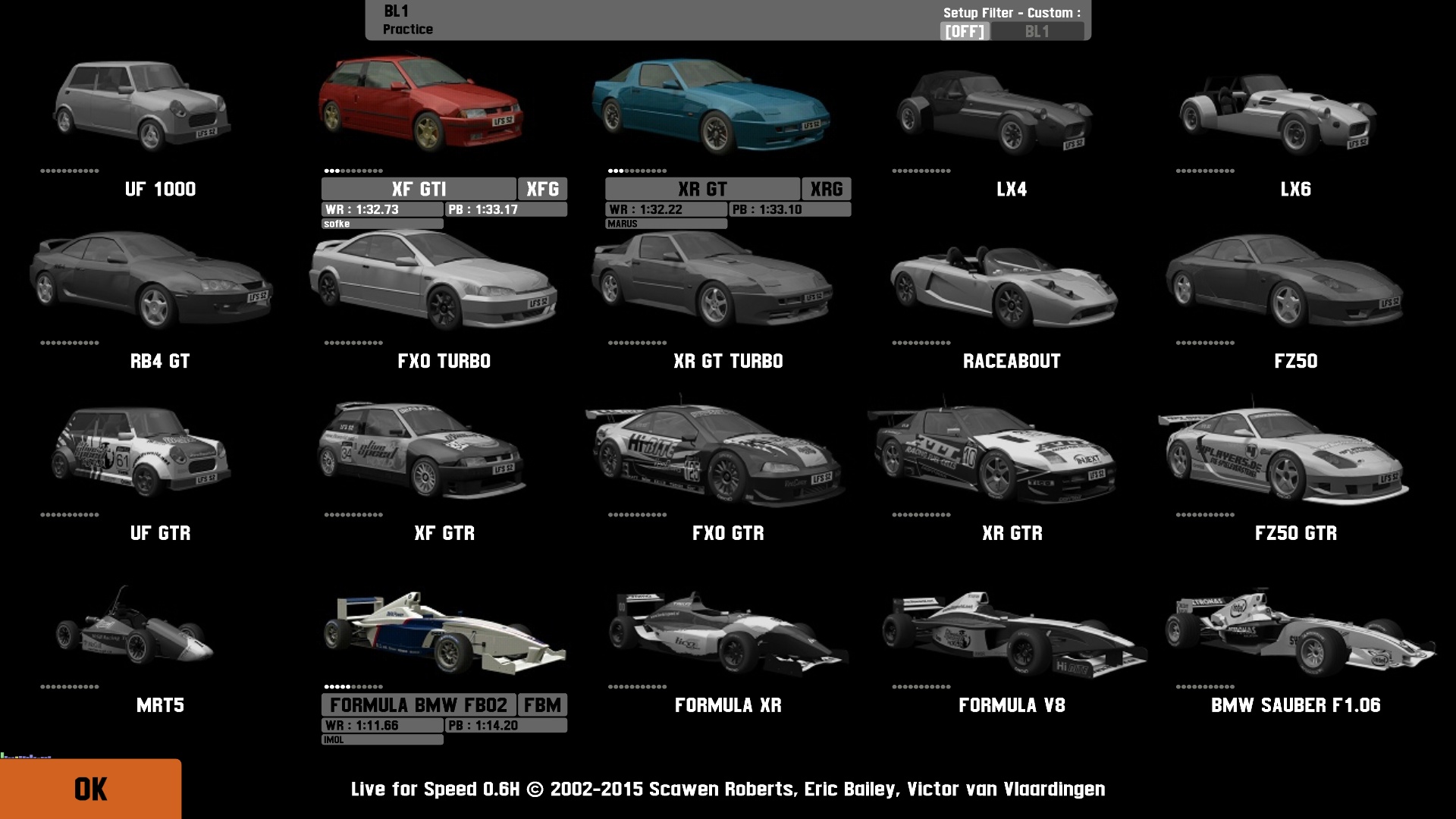 Now when enter SHIFT+U mode there will be little button with which you start Layout editor. Since 0.6H LFS alone does a great job in layout editing so there isn't much features I'd like to add. However while browsing this forum I saw two features often requested, layout merging and layout blocks. Therefore I decided to give it a try, still its work in progress, but results are quite good in my opinion.

Layout loader
Quite simple in fact, you click on layout to load it and its done. Aside from LFS, it shows number of objects in file as well as creation date. Another thing is for example while you are at WE1X you are not restricted only to layouts starting with WE1X_, but you can load any layout starting with "WE" (e.g. WE2 layout on WE1X). Loading layout in LFSLazy will not clear previous layout from track so it should be interesting for merging layouts

Block editor
Using Block editor you can create, edit and place blocks of objects. Blocks can contain up to 30 objects, quite similar to original layout files with only difference being that X, Y and Z are not in absolute values but relative to the first object. My only concern at the moment is whether to allow rotating by angles other then 90°, 180° and 270°, because blocks will never look as original at other angles.

Nice, looking forward to this!
I hope the shift up alarm will be added.

Nice! Can Bring other tracks? WE layout bring to Aston?
DANIEL-CRO

Well, doesn't really make sense because objects will appear more or less on random place. You can try renaming some of your BL layouts to WE and see the results yourself. Blocks should be more suitable for that purpose, because you can access all blocks on any track.
cuprum

Any news/plans for the TV mode?

Haven't developed it much since the last preview. One of the things that worries me is whether to include flag pictures by default. All flags are almost 700 KB, including flags will adequately increase size of an exe.
LFSLazy.exe is already ridiculously big, my latest version is 2873 KB. Of course not all of that is code, in fact code is a minor bit

I include all kinds of stuff in exe, for example Dashboards for cars (around 1400 KB), car pictures used for Radar (new more detailed version take 496 KB), pictures of layout objects for Radar (47 KB), 16x16 flags (which are ofc too small for TV mode; around 200 KB), some icons, ... Sure thing some have no problem with an exe being almost 3 MB, but some obviously don't like it and have complained already. From my side I have no problem to including it, at the same time I'm trying to stay in the middle (to not annoy either side)

In my opinion its better to include everything by default and have no (less) complaints of people failing to install needed stuff.

Stats/Encounters message when someone connect
Previously for users that were already in database on connect LFSLazy would display stats from database, that of course wasn't the best solution as users can significantly improve meantime.
Now there is new message, but you can still choose to use old one if you for any reason prefer it.

Most of message format is intact, however because of slightly more data displayed I had to split it into two parts in case its too long. Now new stats are shown and number in bracket (green) is improvement since last encounter :P

New gadgets
Seeing plenty of users complain how new LFS patch has brought lower FPS, I thought it would be nice to display some data that should help find source of a problem.
CPU SPEED - Frequency of a fastest core on your CPU (in case your CPU is underclocking due to any reason whether it be power saving or overheating it should be much easier to detect).
RAM USAGE - quite simple, current RAM usage in MB
I have other gadgets on mind, like GPU USAGE but all my tries to retrieve GPU usage have failed. If anyone here know a way that work independently of vendor, I'd be more than happy to implement.

Auto adjust fuel
Another feature that came to my mind is auto fuel adjustment. It will calculate needed fuel for RaceLaps + 1 lap, and round it to upper value (ceil). When you press on text where it says "Fuel : ~5 laps" fuel will be auto adjusted.

Chat History in LFS
Now there are 3 columns : time, playername and message just like in main window.
CTRL+SHIFT will now show usernames here as well. 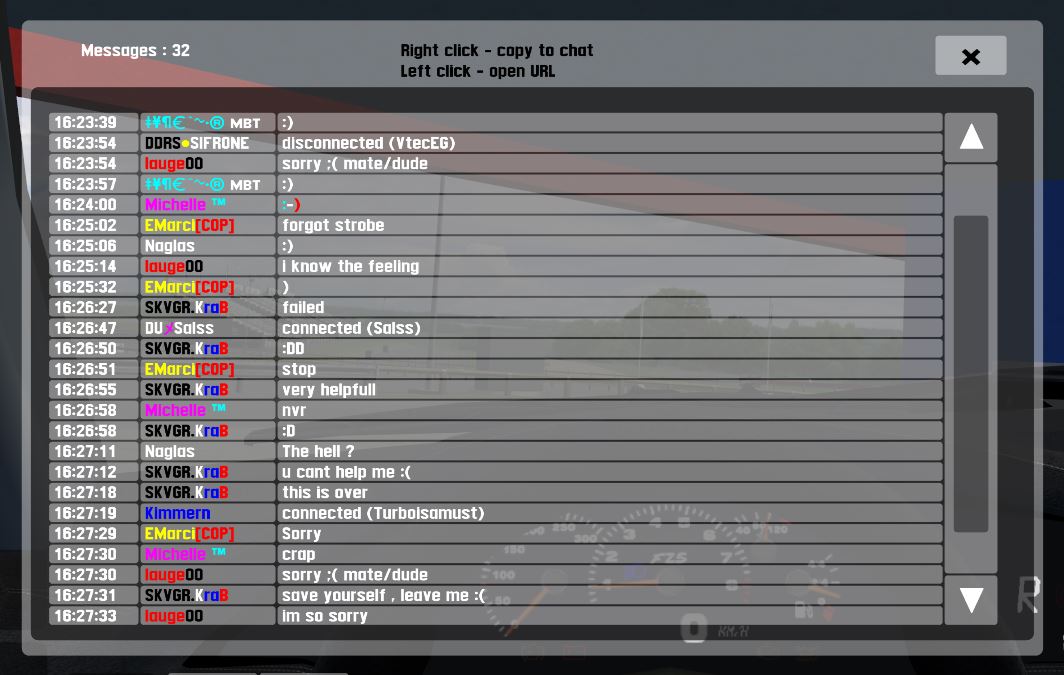 LFSLazy know math!
Few days ago I was placing some objects around in circle using Block Editor ... while entring Heading I was like 180 - 22,5 = 167,5 apparently that wasn't true and my layout didn't look so good

However that made one good thing after all, so instead of entering exact value e.g. "167,5", you can now enter "180-22,5" and LFSLazy will parse that string to a number and do all the math for you. Supported math operations are +, -, * and / on most of fields that accept numbers only. Ye, I know uber lazy

Now you can move Layout Editor window on screen. My original plan was to make a list of placed objects where you can easily move/delete them. I'm not sure that I will find time for that in near future, so I'm thinking about submitting update now as it is.

There's no vendor independent way to get that info. For amd gpus you can use the amd display library sdk, but the easiest way to display gpu usage would be to run gpu-z in the background a get it from its shared memory.
cuprum

Hi!
Sorry for bothering you,but I found another problem with dashboard in recent version.If I turn mirrors and haze off,the dashboard starts blinking and I can see half of default one,and half of LFSlazy dash.Currently using previous build and working without problems.

Thank you for reply
DANIEL-CRO

Not really interested to write separate code for every vendor, that sounds complicated and I cannot test does it work for other vendors as I own only a AMD card. Apparently that isn't a solution for me. Other suggestion is simple enough, but I doubt that users would like to run another process in background just to display a GPU usage, even though I could start it hidden from user. There is one function should retrieve GPU usage, however I wasn't really succesful.

I will send you more info on PM.


Interesting suggestion, will think about it

From my current perspective, there is already a lot text displayed in Car Menu. As you can see I had to lower the size of WR and PB text in order to fit usernames of WR holders without (too much) overlapping.
At the moment I don't retrieve and store your HLs from LFSW. In my opinion it would be much cleaner to add HLs to current LFSW->WRs menu.


While fixing one thing (dash not working on remote BF1) I've bugged another. Should be fixed now. You'll get a test version on PM.

Great work Dani !
Lazy is getting so polished I can see my reflection in the monitor

And by the way (I forgot to tell you about it), since the Westhill update, I have a "Dashboard: scene not found" on upper-left corner.

Daniel I just now discovered this, and even if i love the new westhill, this much more a wave of fresh air than the redesigned map. <3 Scawen should hire you ;P
DANIEL-CRO

Which one to be exact?