On the BBC site I read this..
"If you're wondering where Red Bull or indeed McLaren, Williams and Caterham are, they are present in Jerez, but have so far failed to leave their garages."

"Fancy seeing a shot of Kimi Raikkonen - one of only two drivers who have made it out on track today in their 2014 machines? Well here you go!"

And on a Dutch website : " Renault has huge engine troubles, there will be hardly any test km's for Red Bull... " --> Encouraging!
The cause of the problem isn't a simple one, as I read it has to do something with the crankshaft and the vibrations the V6 produces compared to the V8"

Ferrari doing a good job then with breaking down..

I get the opinion that teams or perhaps teams of particular engine manufacturers will hardly be able to match GP2 times to keep their engines working and not cross the engine limit during the season..
Last edited by danielroelofs, Tue, 28 Jan 2014 11:52.
Stig209

http://live.autosport.com/commentary.php/id/691 the one I've been using for 3 years now, not sure if the best but atleast does it job decently

Hamilton clearly had enough of the dildo-wings and has gone nose first into the wall at T1 https://pbs.twimg.com/media/BfENrKPCYAAha0Z.jpg

Jokes aside, it's confirmed a front wing failure caused Hamilton to leave the track at a considerable speed and end Mercedes' running for today.
BlueFlame

That wall good a good seeing to then.
Gougoodthing

The exact same thing happened to Lewis at Merc during the Jerez test last year. haha (except that wasn't a front wing fail, but close enough...)
Stig209

RedBull and McLaren not driving today (atleast it seems like it).

EDIT: McLaren doing everything they can to get their car into the track today
Last edited by Stig209, Tue, 28 Jan 2014 14:01.
DeadWolfBones 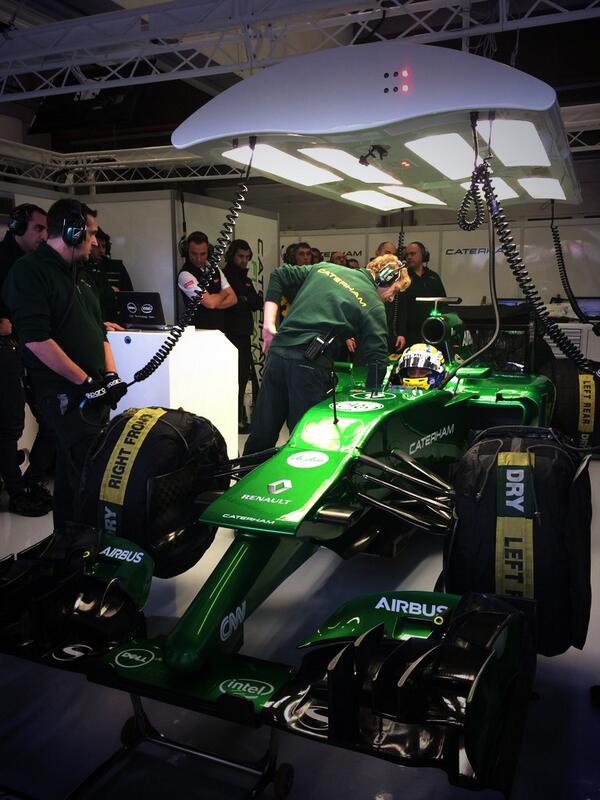 The Caterham made me change my mind about the other cars, they're all beautiful!
Timo1992

Red Bull, McLaren and Mercedes are the best.

Caterham has an aura of http://upload.wikimedia.org/wi ... t-right_Museo_Ferrari.jpg about it.
sinbad

"The regulation has been introduced following some research by the FIA (governing body) that suggests the lower nose height reduces the chances of the car being launched, such as the accident Mark (Webber) had when he hit the back of (Heikki) Kovalainen (in Valencia in 2010)," said Newey.

"I must admit I am concerned the opposite may happen - that cars submarine effectively."

I was thinking the same when I saw this image. A car used to have to get up at least 400 mm before it would be ontop of someones nose, now it only has to be 150mm before this Toro Rosso for example lifts up another car right into the drivers head.
DeadWolfBones

Most of all, I like the fact that most of the cars look different from one another.
CSF I sense the rules will be changed next year.
BlueFlame

So are the Mercedes and Ferrari are the only ones that actually embraced the regulation change? The rest, especially Force India and Caterham, appear to have just said "screw that- this works better, we'll just stick some crap on the front to get through scrutineering."
Knight_Atack

True, Mercedes and Ferrari seem to be the only only who actually integrated the rule change into the design, both of which seem to look best IMO.

And as one posted earlier, I can't see how it can help against scooping up other cars. It is obviously the contrary will happen, I'm sure you'll see cars be lifted left and right this season. I really don't know who conducted this research and how, but it doesn't make any sense.
Mustangman759

Redbull did a good job masking it with the black color so it looks normal at least.
Although, Lotus gets the most unique design award for sure

that would (almost) be my ugliest noses of 2014. The cars itself (asside from the nose) look better IMO.