I noticed something a few days ago and dismissed it as a temporary glitch, but it happened again yesterday. When joining a server after a race had already started, LFS showed a mid-race joiner as the lead car until he has finished a lap. The scenario goes like this: mid race joiner exits the pits a few moments before I connect to a server and he's the one that LFS displays on the screen as the lead car, it also displays his laps as 2/4 - this number doesn't change when he crosses the S/F line as that's when he actually starts his lap 2.

He is also shown as the lead car in the positions list. At the same moment LFS Remote (also opened after joining the server) showed the correct positions list. This happened twice on Z31 patch joining a Z28 server. Everything goes back to normal after mid-race joiner finishes his outlap (other than lap count staying the same as the previous lap).
Last edited by scipy, Wed, 4 May 2011 10:31.
Guthix

are the gaps in Kyoto , fernbay , south city, erm aston (not sure) gonna be fixed in later patches or erm not?
Inouva

Are gona be fixed in the future with some track's updates, meanwhile you should place objects in those gaps to avoid going out of the track
nesrulz

And, btw1, where is wrong way info?

btw2, ideal line (4) is probably hard to put it in this configuration?
morpha

Again, that only affects the grid and pits. There simply is no right or wrong way on open configurations.
avetere

Actually not possible and what is perhaps even more important: Totally senseless. Any ideal-line is dependant on where you are going and this information is simply not there ...


@wrong-way: As you are totally free to go where you want, how on earth should lfs know or decide, whether you are going the wrong way on any specific part of the track?!? That would be . as above - totally senseless ...
=Wolf=[NO]

I have never heard of that. I can't reproduce it and I can't think how it could happen.

Thanks for the description, I reproduced it. In fact the car (whose laps appear to be wrong to the connecting player) doesn't have to be a mid-race joiner, it just has to be one that has never crossed the finish line. So that could be someone leaving the pits as you described, or someone who has not yet passed the finish line since the race started. You would see this same bug if you look at the people at the back of the grid, if you joined a host a few seconds after a race start. Their race position and lap count would be wrong until they finished the first lap.

LFS thought that such cars were on the same lap as the leader but much further round the track than him.

Anyway I found some spare bits to indicate this situation (for timing purposes, before crossing the finish line, the car is in the first sector - even though its actual location is in the final sector). These bits are in an existing initialisation packet so the fix is compatible - if you join with Z32 (next patch) to a Z32 host, that bug will not appear.
nesrulz

It seems that this is more for drifting and cruising than for racing, though...
The wrong direction is needed for racing.
morpha

It's not necessarily required that LFS knows the right way, the drivers have to know. The layout should provide visible markers as to which direction it's supposed to be driven in, worked for years on AU and BL3.
Squelch

While this patch series does suit cruising and drifting, I wouldn't say it is exclusively for them. A friend and I like to build rally style special stages or gymkhanas, and the Z3x patches suit this very well.

As for the missing ideal race line and wrong way flags, these cannot possibly be known for all of the combinations that are now available. The AI cannot use open configs either, the paths are just simply not there. As morpha says, it is really up to the driver to know the correct direction.
mbt_dj

im reproduce an old bug to leave the BL1-Track:

in first corner: simply use the inner-kerbs as a small ramp and the following tire wall give me a spin-jump...

it's normal or a bug?

Who understands the needs of the reason for the wrong direction (in racing) will understand.

While I was watching mbt_dj's replay, I discovered a little bug in follow car feature in SHIFT+U mode in replays. When I follow a car in a replay and go frame by frame forward by pressing the > key, everything is OK but when I rewind frame by frame by pressing the < key (or just by moving the slider), the view stops following the car and moves somewhere else on the map.

In Z28, the view also stops following the selected car but it stays in the same place. It would actually be good if it was possible to keep following the car after pressing <. I don't know if it's easy though.

I understand perfectly why PEOPLE need to know which way to go, but there is no reason LFS has to know. Who do you normally race with that you're so overly concerned with whether or not a message is shown to anyone who goes the wrong way? You're not supposed to ever see that message in the first place.
mbt_dj

yes, if you use a backstep or klick on other past replay point the car focus is lost and move you to finish line. (not the car)

The arrow when leaving pits would be useful though.
We have had the case where a midrace joiner left the pits the wrong way, and only realised when the pack came heading towards them at speed. We've amended the layout with signs in front of the pitboxes now, but I suppose this would then not be checked as a 'valid extra layout' for Airio lap checking purposes because of the extra objects.

Surely choosing X or Y dictates which way the start/finish straight should be travelled, and also the pitlane as it is usually parallel to the start/finish ?
Last edited by Bean0, Wed, 4 May 2011 16:40.
morpha

The pitlane direction indicator seems reasonably simple, that's the only stretch of track that's guaranteed to be one-way in race configurations. I still don't see anything wrong with these guys though: 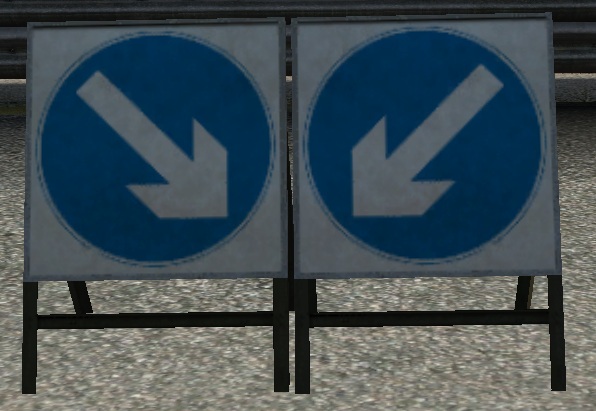 Does this means smoke will be finally visible thru fences? :P
nesrulz

OMG, we need server penalty for wrong way! In racing. Because people drive races. People like to break the rules. And this is the basic rule.
Last edited by nesrulz, Wed, 4 May 2011 16:58.
boothy

ZOMG then I assume you'll be the one helping to make the .pth files for each configuration?