I so want that!
Never tasted it before, looks delicious!
TexasLTU

should be comming friday or maybe monday

got the DVD/CD one too, been listening to it loads...if I had to choose one, Piranha is my favourite track
majod

modules are 8GB altogether, all this for 15€...unfortunately it will not be in my desktop PC

How did you get all that so cheap?

See I knew you were a prostitute.
LineR32

a resistor for the heater controls in my motor, old one packed in.
senn

a 1986 aw11 supercharged, with one side of the front smashed in. I will be stripping it for parts, to fix the working car i already own, plus eventually dropping the supercharged motor, and LSD transaxle into it...
Velociround

I bought a game pack on STEAM that doesn't exist anymore

(If ya don't feel like reading through my summary of what I got and why, and what I replaced, just peep the pics, or ignore it all, whatever lol)

This first one isn't computer related, but was a huge investment, so may as well throw it in there;

2004 Ford Mustang Cobra - 4.6L 32V Supercharged (stock) Now has suspension, brakes, car comes with an independent rear suspension, unlike 99.9% of all other mustangs, which is why it's hard to make them handle well. Only the 2003-2004 Cobra's come with the IRS, oh and the very rare 2000 Cobra R. So anyways, yeah suspension, brakes (Brembo's all around), Kenne Bell 2.2 supercharger kit (The stock supercharger is great, but I got a great deal on the KB, and they're amazing, bolt-on 100+HP. Stock wheels with nice sticky Pirelli P Zero Nero tires, although I heard they're not the best, and that bf goodwrench sells tires which are superior, and cheaper... Ima look into that, and sell the pirelli's. I left the gears stock, I love cruising at 70-80mph at under 2,000rpm, awesome. I smoked out the head lights, they're smoked stock, but I smoked them about another 5%, along with all the markers, just like on my VR6 GTI if any of you have seen it. It has full length headers, and Borla exhaust 3 inch W/ MIL eliminators. I got a custom tune, made all the difference in the world. Reasonable gas mileage when I'm not hard on it. Exterior is stock, love the car for what it is. Interior also. Car dyno'd recently in the cold weather @ 556RWHP. 0-60 in 4.2, with major wheel spin, and 1/4 mile in 11.5 on street tires. Car is full weight. That was on the race tune, and very cold air. On the street tune on a warm day my mechanic says it should push 450-470RWHP. I'd rarely load the race tune, I don't race as often, not with this car. The imports, heh, it's all I do.

I had a 8600GTOC, not bad, but the 128bit mem controller killed its bandwidth so I couldn't play new, DX10 games in my native resolution, had to run everything in 1280x800, and we all know how horrible a LCD display looks outside it's native res, so finally, I bought these;
My power supply wasn't strong enough, not by a long shot, to even run one of my new cards(the 8600 ran off the pci-e slot itself) So I grabbed this PSU at a real bargain at my local best buy:
Can't find any pictures anywhere, it's very nice, but expensive, I think 169.99. Modular design, great for keeping your case nice and tidy, very high quality it seems, all wires are covered in a braded type material. Quad 12V rails at 18a each, so 72amps on the 12V, enough to run two GTX285's!!! It looks great too, and runs, honestly, incredibly cool and quiet. 4 PCI-E 6 pin and 2 PCI-e 8 pin...maybe 4 of the 8 pin, not sure, def at least two tho. Anyways there's dope ass stuff online for great prices, but if you "had" to shop locally at a Best Buy, ya can't go wrong with it, it's my fav PSU I've owned, been gaming since mid 90's. It's the 850 Watt Black Widow Gamer Power Supply. 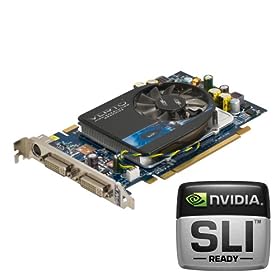 . After only 3 days I bought another lol, all at my local Best Buy, I freakin love the place. Honestly tho, just the one ran everything perfectly, but I wanted a second because I've never ran SLI before, and to make my expensive power supply worth while, and..why not put up nice 3dmarks....plus my friends were mad I didn't just get a GTX200 series. I'm not sure, it was hard, but I think my two 9800GTX+ 1GB OC's will outrun any of the GTX cars, but I can't be certain...regardless I simply love the 9800GTX+, I can't explain it. They're uber reliable, and faster than a 8800 Ultra, what more can ya ask for?
I'll have to check Toms Hardware. The 9800GTX+ is incredibly superior to the standard 9800GTX. 55nm instead of 65, runs cooler, less power consumption, = badass overclocking!!! And believe me, they OC very nicely. And they don't get hot, with no OC at all, just the 'out of the box' OC, they idle at 46-51C, under full load as high as 64C. Pshh, my 8600GTOC idled around 58-62C and full load 80-84C. Sometimes it would crash, but somehow it handled it.

Enough about that, sorry this is goin on and on, it's just that I bought a lot of stuff, they screwed my on taxes last year, plus I was finally paid other $$ owed to me by (I can't say, gov tho) and so, I'm a hardcore gamer, but I've never had the proper gear, so I decided since I'm doing well financially, well, stable, I'd get my computer setup as it should. So I went crazy with Logitech(One of my favorite brands, for many reasons)

I got the G5 mouse(OMFG, best investment I've ever made, I've never had better than a $15 mouse, hah, amazing), also the G15 keyboard, just as badass, I often need the lights turned down, I'm a night owl, stay up very late, work all day, and the keyboard is perfect for it, plus it's other abilities, especially with LFS, and a few other games. Then while heading toward checkout, I saw a set of Logitech speakers, and I badly badly needed a set of speakers, my good ones were destroyed during my last move, so I'd been using a 40 total watt speaker system, just...horrible. So I grabbed the Z-2300 Speaker System. Where I presently have the PC setup, I can't have surround sound, so the next best thing is a very nice THX certified, high power 3 piece set, with a woofer that really works. These speakers are nearly as loud as the $3,500 system I have installed in my Saab, truly amazing, and under $200, not sure, maybe like 169 I think.
Pics:
Mouse:

Lastly, I've been holding off a long time, partly because of the format war, and partly because, I simply didn't care, I don't watch much television, and I like to wait and make smart buys.( I don't always have such patience, but lately, my patience has payed off hugely, like with the video cards) So anyways, I found an uber Blu-ray player online for dirt cheap, great brand too, but even better, the day I spent at Best Buy, where I bought virtually everything I've mentioned so far, they had the exact HDTV I wanted. I specifically wanted a 32", with really good color capabilities, uber contrast ratio, etc etc. Naturally it can't physically show a full 1080 resolution, but IMHO I can't tell, because of how far I sit exactly from it. I did a lot of research on HDTV's, and what's important, and this 32" is perfect, again I got an amazing deal. I don't understand, they had like, a sale/clearance so I grabbed it as well. Only mistake I made, was buying a 6' HDMI cable for the blu-ray player to the HDTV, but didn't think to grab a ten footer for my computer, so next time I stop by there I'll grab one. I'm dying to play LiveForSpeed, Flight Simulator X, Quake Live, Wolfenstein: Enemy Territory, WOOT>>> Stalker: Clear Sky; with the lights all turned down(This I have actually tried, borrowed a cable for one night from a friend that has an incredible tri sli alienware...so jealous) omfg so immersive and nerve racking.

Sorry that I carried on, but I actually bought all of this, this past monday, 4 days ago. I guess I didn't need to summorize what exactly I replaced and why, but felt like it, if ppl don't feel like reading, simple, just peek at the pics lol. Peace ya'll. And can anyone tell me what it's like to play LFS on a HDTV? I bet it's uber sick. Mine can just hang on the wall, so when I play ima just hang it on the wall in front of my computer, so I'd be about 4-5 feet away from the the HDTV, that should be plenty, cause it's not too big and has a very sharp resolution. Only reason I didn't go for a larger HDTV is because it would be completely useless for me, and how my computer room is setup, plus I saved a ton of cash, and the quality of the 32" I got is superb, it would have cost an additional $1000 or so to get a 40" or larger LCD, funk dat, and it would be too big, I don't wanna sit halfway across the living room to use it. Besides, from where I sit, it gives the illusion it's a 50-60+" TV anyways.
Last edited by DHRammstein, Fri, 27 Feb 2009 11:58. Reason : Grizammar n stufff
TexasLTU a weekend camping ticket for T in the park. yeelllttttt
G!NhO

Simply awesome, and i love the sound of those superchargers