You know.... maybe this is off topic, but curiosity has gotten the best of me. Scawen goes on and on and on and on and on about tires. This dude should get a job at Good Year or something. He's always got something going on with the tires for this game. Gotta admit though, He got me paying attention to tires a lot more. Well what about the track surface? Is that designed to maximize the efficiency of the tires? Or is it just a standard surface? Like this is tarmac, this is brick, that sort of thing. Or are those things taken into account? Like with concrete. You got ready mix and it's got a bit of gravel in it and has a rough surface, Then you got Portland cement that when finished just right can be as smooth as glass. There's slight differences in asphalt too. Is any of that taken into consideration when designing the track surface?
CLRS530

Are you bored a lot Racer Y?
sinanju

Do you mean when designing track surface within LFS, or designing surfaces for real tracks?

In LFS, there seems to be only 3 type of surfaces, and therefore 3 different grip levels depending on what you are driving on.

In real life, although most tracks are asphalt, there can be huge difference in types used, from fine grain to very course grain. And these change, not only with use (eg wear and amount of tyre rubber being laid down), but how much bitumen / oil seeps out due to age, heat, etc.
And some tracks have used diamond cutters to mark up the track to get more friction / grip.

So, if LFS (eventually) simulates rain, will lines be given a lower grip co-efficient compared to the track surface?
farcar

In addition, surfaces are affected by things like rubbering in, and temperature.

Some of the modern sims are starting to simulate this quite well. I've been playing a lot of Automobilista 2 lately, and it's really challenging and fun to manage the changing conditions during a race.
Puddles form after heavy rain, and if the rain stops a dry line will slowly appear but some sections of the track might retain puddles for longer. Emerging features, but very cool.
tommer

The new South City will probably be a big hit for cruise servers - You should consider adding a light bar configuration for the road vehicles.

Cops and Robbers although it's probably not what you had in mind when making LFS is some of the most fun I've had on a racing game and is what kept me playing LFS all this time.

Cops and Robbers has been a thing in LFS for a very very long time. Back when there was no wrong way detection, playing it demo servers used to be a blast. It's really the whole predecessor to cruise servers.
BeNoM

Him and and Racer X seem to be very bored.
Racer Y

Nah. More like bored and stuck in traffic. Ever run over an expansion joint at different times of the year? Do you have a clue what I'm even talking about? When you do that, and you will a lot in cities, It changes. Here it can change a lot. I ride a bike. I tend to notice these things and the effects they can have. Especially on the freeway. So I was wondering how far things like that was taken into account when designing a track.
If I'm just bored, I'll ask questions like; What would the LGBT community be like if humans reproduced asexually?
sinanju

On Motorways / Freeways / major highways, there's a lot of heavy goods vehicle (HGV) traffic. I think in USA you call them tractor/trailers?

You can just imagine how much wear and tear that puts on a road surface with heavy vehicles doing 50mph or more.

You'll notice in areas where these trucks do heavy breaking, it's not unusual to see the tarmac rippling, where the surface gets dragged forward under the heavy load.

Or, when you have a small pot hole, not only does this get bigger and bigger, but because of the truck suspension bouncing, you get a line of holes after the pot hole, and these then get bigger, and this continues, till, eventually, the authorities repair the road.

For track design, they're not expecting 40+ ton trucks to be racing round the circuit, lap after lap, chewing up the track, although they may have to think about Formula 1 cars, as they have so much grip, they can lift welded drain covers off the track.

I'd imagine, track designers and operators are mainly thinking about having a smooth a surface as possible, laid in as close to one strip as possible, so they don't have to deal with expansion joints, which as a bike user, you'll know these can be as bad as ice when they get wet.

For Bahrain, they used very low tolerance asphalt, constructed with a modified polymer bitumen with very strong gravel, because of the intense heat. Gravel they used came from UK - see HERE.

If you want to see (somewhat) how the track is laid down, have a look at this video on the Zandvoort circuit upgrade.

Unfortunately, the video is a bit dark.
Racer Y

OK.... hmmmm. So City Sprint 1. the back straight is on an elevated section of highway. In real life there would be seems all over it from how they built it - if it was real. Those little joints expand and contract. Not by wear and tear so much as by shifting ground and temperature changes. Sometimes I can look down on one and see the ground down below - then six months later the pieces come together a bit more. For motorcycles, not paying attention to them can be deadly. So I figure these joints should be there and have some sort of effect on race cars shifting around trying to get the best line.
I imagine with building actual tracks, things like that are taken into consideration. But the S. City and Fern Bay courses are ran on actual roads... uh you know what I mean....
sinanju

Never played the game, but looks like Need for Speed: Heat may have road expansion joints. At least, by the looks of a still frame I took from a YouTube video .... 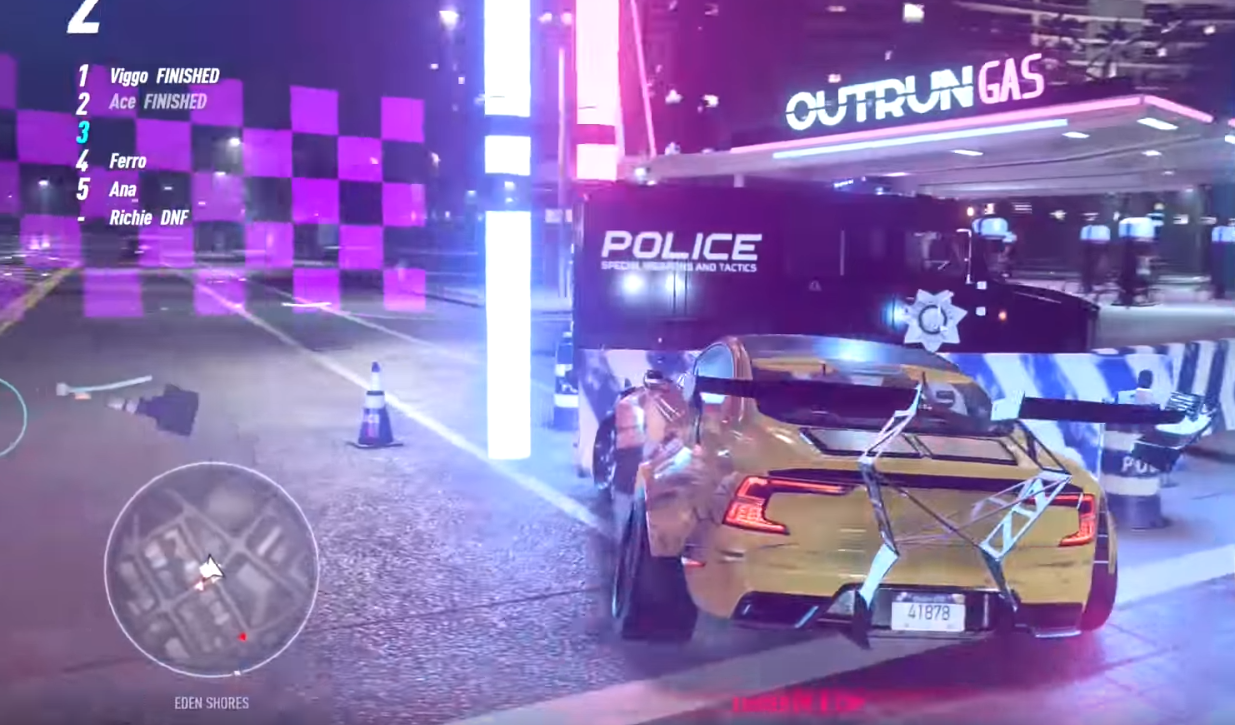 However, I'm betting that's a graphical thing only. Not that it's not nice

Although, it does looks more like a stihl saw cut. My experience of expansion joints are that the people that fill them in think their job is to roughly mark the area that was done, as most of the stuff is just spilt on the road rather than in the joint.

Regardless. If a programmer was thinking of adding realism to a track, I would think rain, oil, tyre 'marbles', racing line rubber and painted surfaces would be way more important than tarmac joints.

In case you're wondering; the yellow car lost control way before getting near any of the lines you see in the image.
Racer Y

I think there should be more attention paid to the road/track surface. Maybe not to an extreme degree. Like lay out the joints and leave them. Maybe not go as far as worry about heat buckling or flood damage. But yeah, those joints can have a pretty profound effect on a race. One car with a softer suspension set up and longer wheelbase can hit the spot just right and be ok where a car with a stiffer suspension set up won't as much. What would that be like after a 10-20 lap race?... Hopefully, this picture came through. See that line in the middle of the lane? That line opens and closes quite a bit. In places the surface on one side or the other becomes uneven. Now. How do you think that would effect things if you're road course turns left, but this line keeps going straight? Actually on this lane, there's like a chicane.
poirqc

Thanks for this report! The video was breath taking!

Even if it's been years since I sim raced, i'll always come back to this forum to check about your progress.

I may not race anymore but I'm glad I bought licenses over the years.
fatalunfair

How hard would it be to implement fixed setup racing for the upcoming update?
Flotch

I would have supposed that with VW scirocco having very few setup options, it would come with this most awaited update ever 🤘🏻
Racer Y

You just had to bring up the VW, didn't you?
Flotch

What's the use now when it's gone out of production?
Evolution_R

As time goes by, sadly, I think sermilan is right.
Time forgive nobody. Often good things happens at the right time.
Timing is everything. With that said, LFS is timeless, so, we will see.

So which of the current cars in LFS are in production?
Flotch

They can give us a 458 or a Gallardo, I do not care at all they are out of production, do you?😊
UniValvePlums

Don't know what we are waiting on. Is it's just incomplete tracks or is it the tyre physics.
But if it's incomplete tracks then I think it would be nice to release an test patch.
Even when there is only Blackwood. I Believe many guys will come back test and have fun.

Must say in 2018 I had feeling the new version was almost ready. At first there was every month news (new progress report) But now we get now and then an report and I get feeling progress got stuck.

Please give us an ETA or just more info about whats going on.
Scawen

I can't really get into any discussions at the moment but we are working very hard and hope to say more within the next few weeks.
SamH

Good enough for me!