I believe it just uses view you have already set up. From your in car video I suppose you use default in car view. Change to custom when sitting in car and then set it up as you want. Note that you have to set that view for every car seperatly.
lucaf

Wow didn't know that. Thanks. (I did never understand how some ppl are driving in custom view...)
Eclipsed 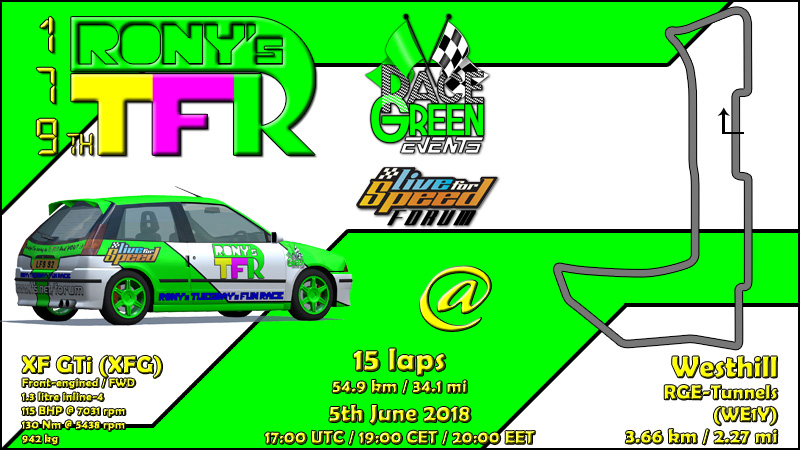 The legendary Tunnels layout <3 This one will be fun! Take care of your clutch!
Eclipsed 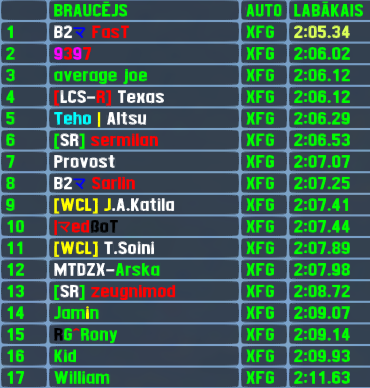 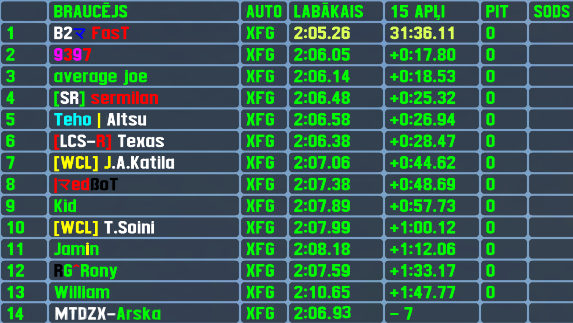 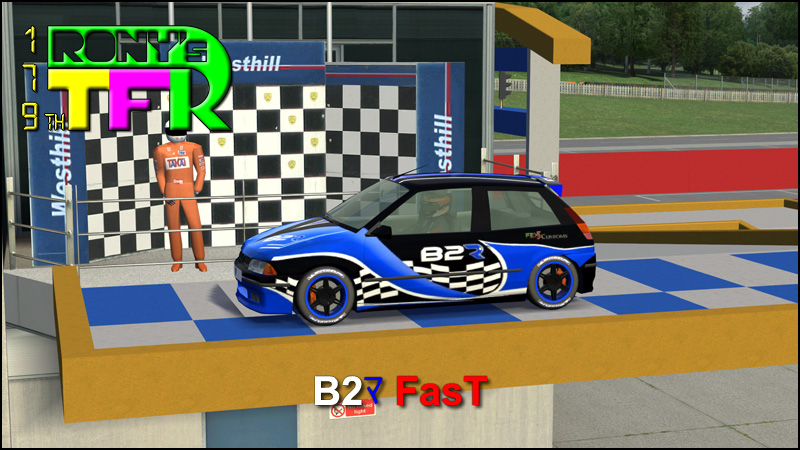 Unfortunatelly we had some technical problems yesterday - server proved to have some unneccesary latency during practice and qualifying. The attempted start turned into a chaos and brought out 1st red flag situation in RTFR for almost 2 years (since 131st RTFR). But situation was saved by lfs.net hosting service,where the quickly set up on demand server proved to be a worthy back up plan and we had a trouble free race.

Server problems did not disturb qualifying battles though - we had a pretty solid leader in this session,who beat his own unofficial track record set during practice,but,as everyone can see in results,fight for 2nd position was intense. Fast was the fastest yesterday - earned his 3rd pole position in qualifying,lead every single meter of the race and celebrated his 2nd RTFR race win - he is 34th multirace winner of RTFR. He also set his 4th fastest lap of the race and 5th top5 finish. 9397 was the 2nd fastest in both sessions,but he had to work hard for it - 2nd place finish,which is repeated his best result,while he improved his best qualifying result by 2 positions,4th visit in top5. Average Joe repeated his best qualifying performance,but never found a way to improve position in the finish - yesterday's 3rd place is his 1st finish here with 2nd try. Sermilan gained 2 positions between green and chequered,5th top5 finish with his 4th position,Altsu started 5th and finished 5th - 9th top5 finishes for him and also he might become rating leader as provisional quick calculations suggest.

Next week it's RTFR XL's turn to offer some racing - Formula V8 in Kyoto Grand Touring configuration is selected,should be a great challenge for many. And 2 weeks later RTFR will return with one of the race cars being available,more details as always in the weekend before.
Jonathon.provost

Despite the server issues and my own pc having a moment causing me to loose connection, I loved this combo. Hoping to join on more soon. Thanks !
lucaf

My incar. Maybe most interesting moments were around laps 11-13 when I almost lost the fight to Joe

well driven lucaf, was really frustrated about lack of pace and inconsistency but i guess thats what a change of controller after 6 years does

nothing to take away from you though, good speed and fair racing

Nice and clean racing, well done both of you

no race this week?
jackson93

Maybe Rony has a trouble entering LFS forum like a few other people. 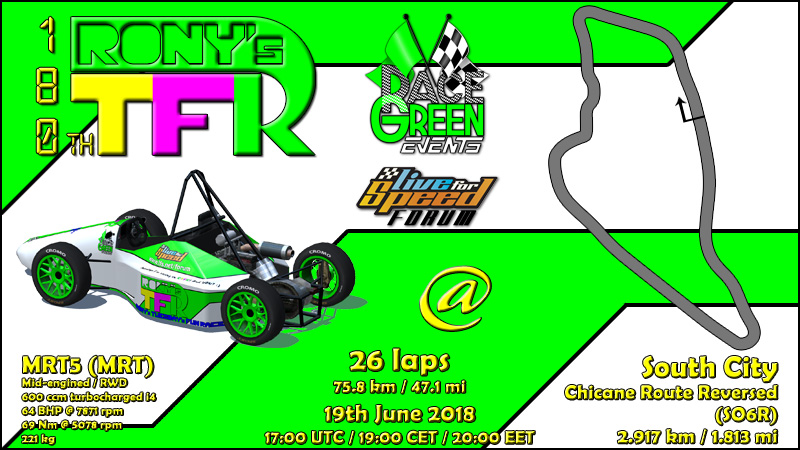 Yes,that was the case... Actually it still is,as I can load this website only via proxy server.
Spiiiky

yep, I have the same problem for the last few days
lucaf

Airio restarted. If we'll experience lags like last event,we'll jump to back up server for the race. If connection issues will repeat again,will search for other hoster.
sermilan

Yet Lukas finished in front of Altsu... a glitch in the Matrix, I suppose

Not to take away anything from Lukas' race though, he drove an excellent one, recovering from being hit on first laps and falling down to 10th place. 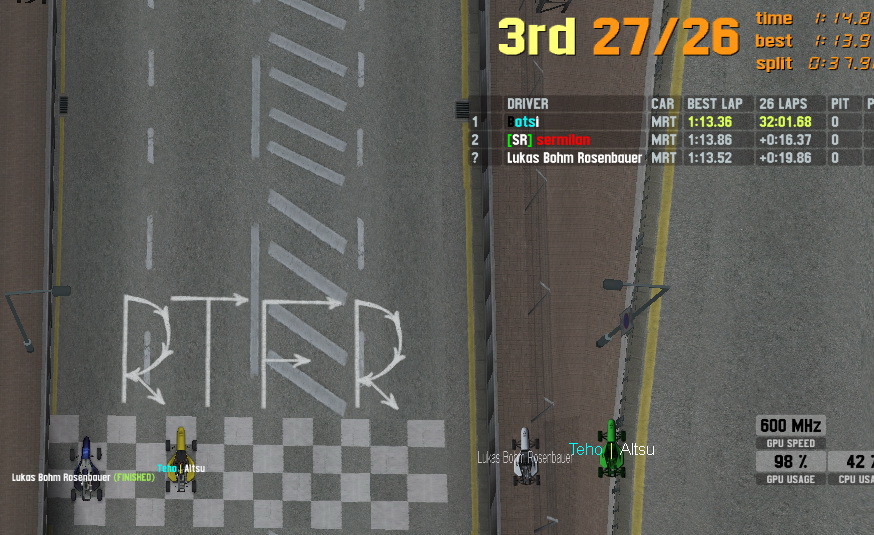 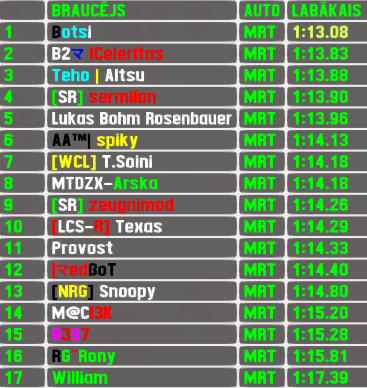 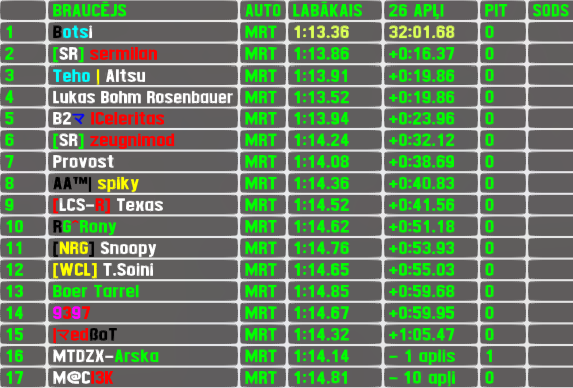 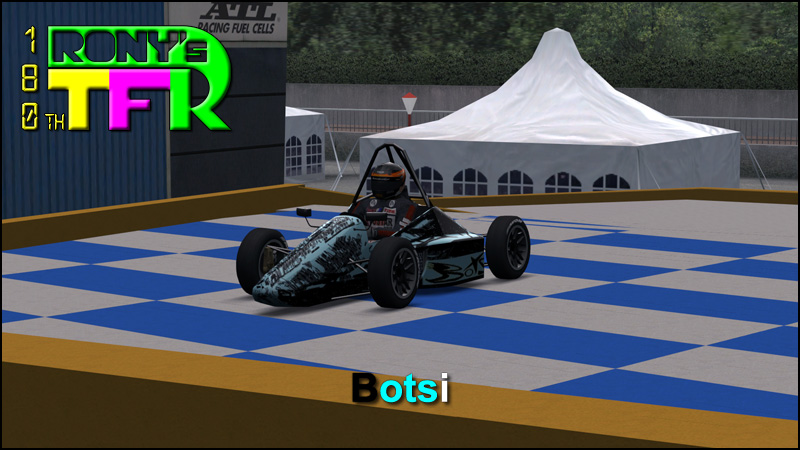 This was noticed only due Sermilans post above - in case something similar happens again,don't hasitate to notify either in server (and wait for response,because not all chat lines can be seen due me saving results and others discussing race) or post here.

The race with 3rd least popular car still was interesting enough for over-average attendance and that despite respectable chances of being stuck against wall due to this car not having reverse gear.

The world record owner Botsi proved his rights for being fastest in this combo - he dominated the whole evening and collected his 9th win,9th pole position,8th fastest lap of the race and 21st top5 finish. Best of the rest was Sermilan,who gained 2 positions during race and finished 2nd,repeating his best position here with his 6th top5 finish. Altsu was just able to keep himself ahead of his compatriot in the final dash to finish line,3rd position for him,10th top5 finish in his stats,Lukas Bohm Rosenbauer has to settle for 4th position,which is still 1 position higher than qualifying effort,2nd visit in top5 for him. Top5 was closed by ICeleritas,he increased his top5 finish count to 3.

Next week is the one from 4 being free from RTFR events,but 2 weeks later we'll return to track with one of the street legal cars,more details in the weekend before it. Meanwhile also the combo for the next RTFR-XL (scheduled for 10th july) is announced - it will be the first appearance of any of the XR cars. Having GTR races every 2nd month is starting to settle in as a rhythm - it will be the 3rd odd-numbered RTFR-XL in row having a GTR car,this time the previously unused XRR will be run in Aston GP configuration.
jackson93

Thank you for adding me to final stats even though I didn't ask for it.
Much appreciated.
lucaf

Thanks for the event, and for the interesting track graffiti in the chicane xD. @Redbot: Im convinced it was at least 50% my bad our spin in the chicane - I didn't left you enough space. Congratz for Botsi, impressive domination! I still don't understand how faster guys can pass sector 1 bumpy part so quick

Yes!, I knew you just close your eyes.
Eclipsed 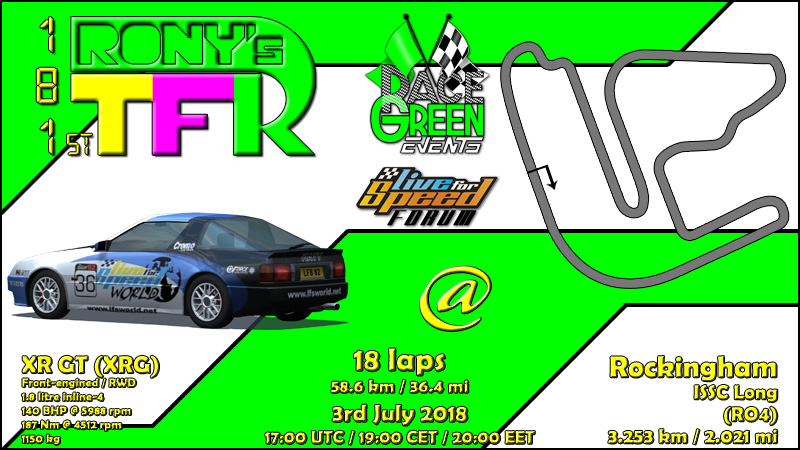 I really wish to be there

Nice, I will try to be there.