Yes, if we will not have next update in LFS soon, I will soon win my first race

World is crazy - I fully agree!

Those words happened to be a catalyst for my next idea, along with the racing video
Eclipsed 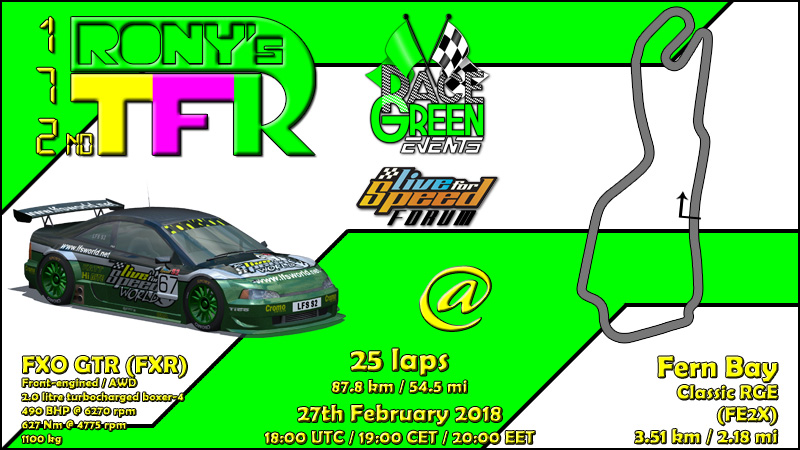 Server is up and running: Ronys Tuesdays Fun Race (feel free to spam the Airio top table with your laptimes)
Kid222 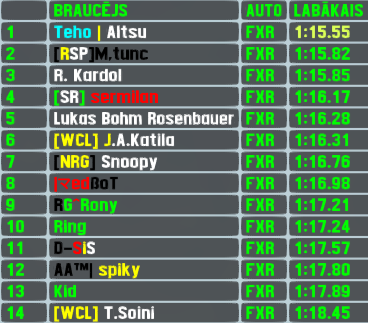 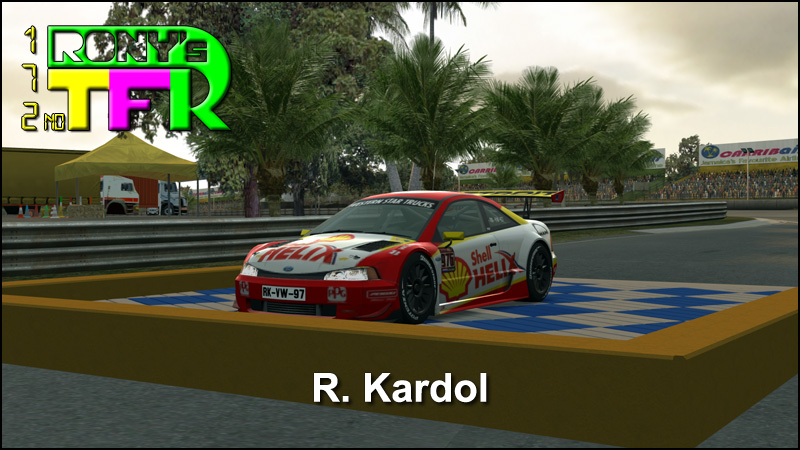 2nd FXO race in row in RTFR,but this time we used the race version of it,and that in quite rolls-causing environment - Fern Bay. The first chicane already early in race caused 2 retirements due rolls,but rest of the field were more roll-resistant and finished the race or at least completed the 50% of the race and were marked as finished. And the first one to cross the finish line was R.Kardol,who after plenty of 2nd place finishes finally was able to take the top spot of the podium,he is the first new winner since september of last year. R.Kardol set also his 1st fastest lap of the race and scored his 6th top5 finish,it was also 2nd win for Netherlands - previous one was taken by Vincper in october 2011 (22nd RTFR). If week ago in RTFR XL the polesitter Altsu was finally able to convert the starting position into win,yesterday it didn't happen again - Altsu scored his 3rd pole,but could finish only 2nd,seems like due hardware gremlins,as he complained about upshift problems,still 4th top5 finish in his account. 3rd was Snoopy,for whom it is the best ever finish in RTFR,previous best was 1 position lower,5th top5 finish for the swede,4th was another event regular J.A.Katila,10th top5 finish for him. And top5 was closed by Redbot,who repeated his best result.

In 2 weeks the fun racing continues with one of the street cars,but already this sunday Race Green Events offers rallycross action in the 5th round of AWS - championship will be heated up under jamaican sun,while it's the last chance for newcomers to jump in into action of this league this year. More info in AWS thread,can be found also via leagues section.
Eclipsed 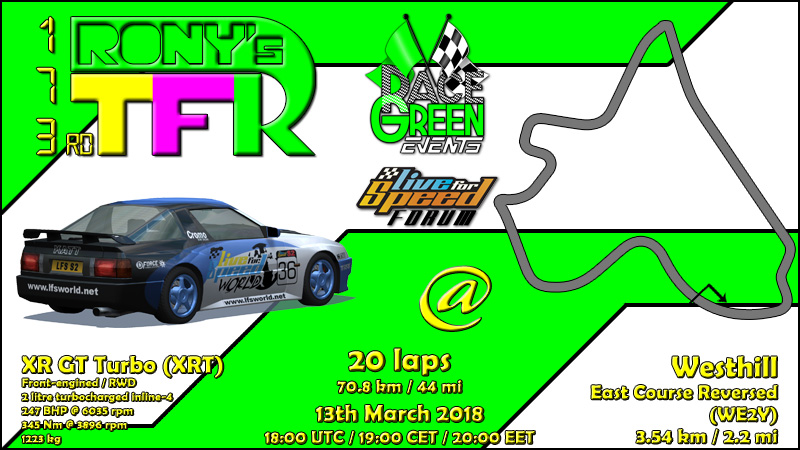 Okay folks, cmon lets have some

And boy did we have fun :-D
lucaf

Here is my incar vid 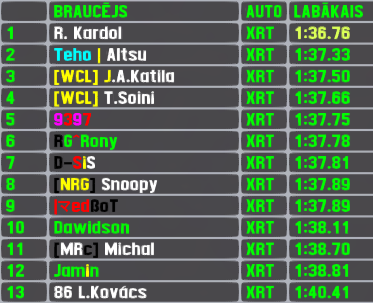 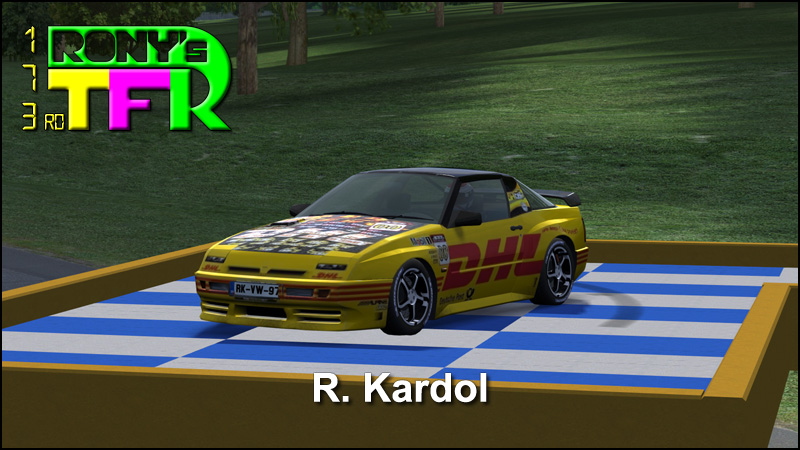 Considering the varying cars used in RTFR,it's not easy to have a winning streak,but we have a new streak - R.Kardol becomes the 12th racer to have back to back wins in RTFR,and that just 2 weeks after winning his 1st race here. R.Kardol was the fastest in qualifying and earned his 1st pole position,then led every single meter of the race to take his 2nd victory and 7th top5 finish. In 2nd place finished someone,who did the previous winning streak - L.Kovács. He joined late in qualifying and was able just to set a single laptime,but during the race he rallied through the field passing everyone but the winner,setting also fastest lap of the race,which was his 5th,increasing also his top5 finish count to 5. Altsu had tyre problems in latter half of the race,but still brought the 3rd place home,5th top5 finish in his account,Rony wasn't able to challenge anyone ahead,but had a gap to chacers to finish 4th,70 top5 finishes already reached,but D-sis had to work hard for 5th place finish,4th entry in top5 for him.

Usual 2 weeks break until next normal RTFR,but already next week it's time for RTFR XL - combo is selected and it is FZR at Westhill International. And as a reminder for those who already raced in AWS this year - the final round is this sunday!

It has been reminded every time someone stays in server but does not intend to race - chatting is forbidden for spectators. Why? It's a fun race,so chat is not closed,so every one can exchange small messages like "sorry","good pass" or similar. We're no robots,we're humans and it's normal to communicate,and noone has to be forced to block messages,because what we don't need is outside commentators or unfair information spreaders. That's why I'll stick to rule forbidding chat for spectators. But some has to be higher than that and join the server to type unneccesay bull#$!t. And after getting banned for that,he returns with other account to keep on spamming,while the person hasn't shown mature attitude to the event for long time - joining just in qualifying,starting multiple races,but never finishes it,while still affecting the race for others. Therefore:
[RSP]M,tunç alias nob / any other random name (LFSW: ufoandaliens / any other random account) - gets stripped from the privilege to start race without qualifying (gained by winning a race). This means he has to qualify for the race like everyone else. Due unserious attitude towards event,he will be closely monitored and any minor incidents caused by him might lead to a race ban.
AA™| Mikke - please do not encourage persons like the one mentioned above to unneccesary spamming and if joined late,respect racers already in race by keeping the chat free!
Mikus1212 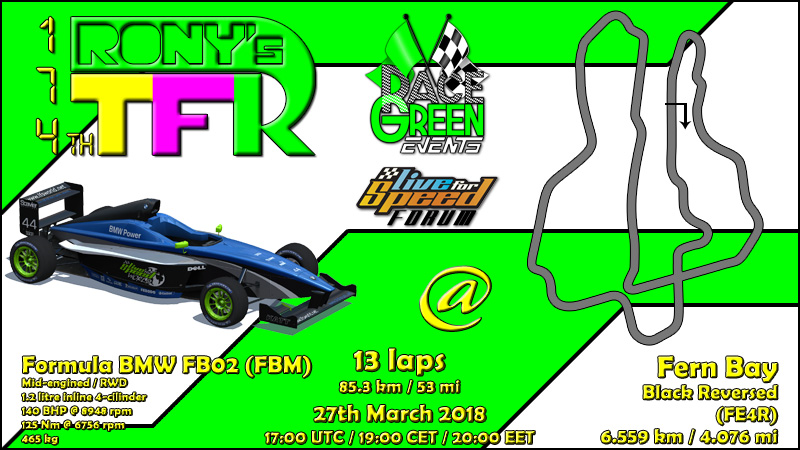 Important note: Due summer time change in Europe,the UTC time of the event has been changed! If time in your country hasn't been changed to summer time in past weekend,make sure you check the correct time! 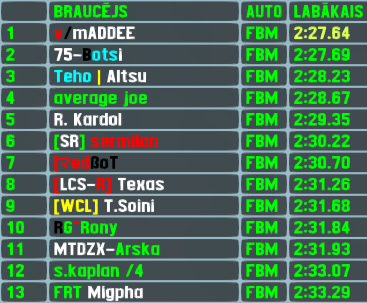 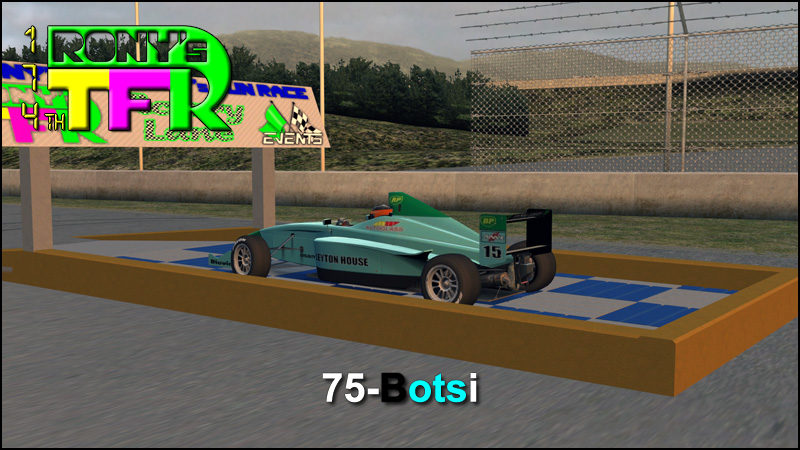 As expected this event was pretty difficult for many,that explains the relatively low finishing rate. Qualifying ended with close fight between 2 finnish drivers,Maddee was the better of them and with his own 1st pole position he also scored 50th pole position for Finland. He never started though,leaving the 1st spot on grid to Botsi,who lost it already in 1st turn,but regained later in 1st lap - that was the last lead change and Botsi celebrated his 4th FBM race win in RTFR,becoming the first driver to win more than 3 races with same car. It was Botsi's 7th win in total and 19th top5 finish. Altsu never lost sight to leader,but could not catch up with him,2nd place finish for double race winner,6th top5 finish in his account. With final lap rush Sermilan was able to steal fastest lap of the race,hindering finnish drivers to take also 50th fastest lap of the race. It was his 1st such achievement and 4th top5 finish. 4th was Rony,taking his 71st top5 finish and 5th was Redbot who repeated his best finish result for the 3rd time.

Well, who else was caught by that last chicane? :-D
Thanks Rony for having me on the results table (75% race distance?).
Eclipsed

Me, a bit because of cold tyres...
Eclipsed 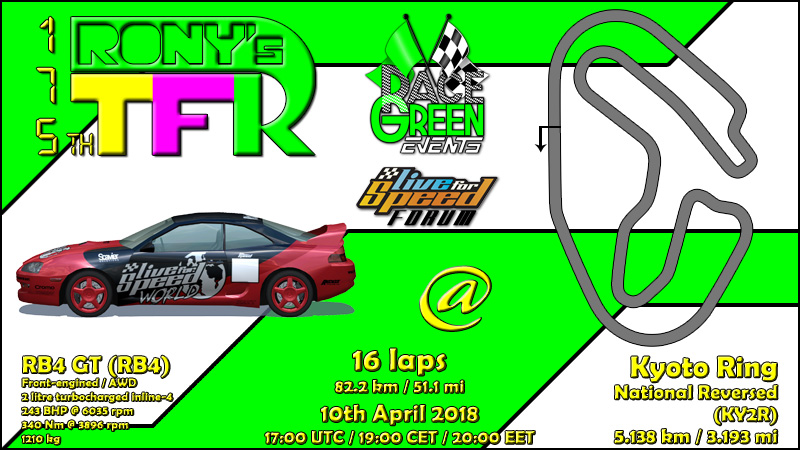 nice, i try to be there. Anyone for a race stint now?
lucaf

cmon guys, take a break from cruising, and join the event

I leave a protest of Sarlin's move at last lap, mpr file 32:49, I haven't chance but go to grass while being pushed twice in the tight left.

However, thanks for nice race and exciting fight!
Spiiiky

I would like to protest. Incident in last lap before chicane in last sector between Sarlin and lucaf. Pushing other car off the track, then gaining advantage because of it.
jackson93

Nice race, RB4 made this race a lot more close. I almost could see leaders after Lukas was forced to retire because of eating.
Spiiiky

I think that move in last lap in last sector before chicane was made out of pure despair. Not how we do it, even if it comes to winning or losing because of that moment. Keep it clean, so you can be proud of winning.
lucaf