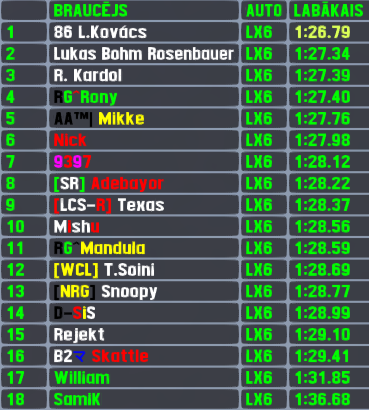 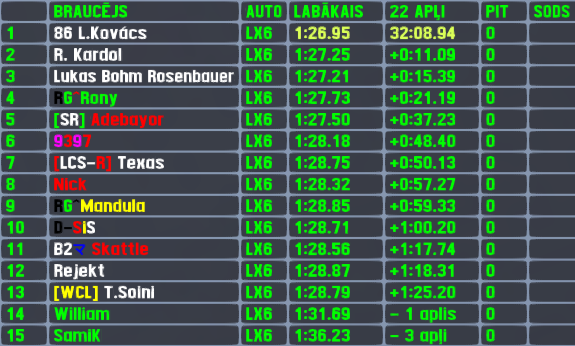 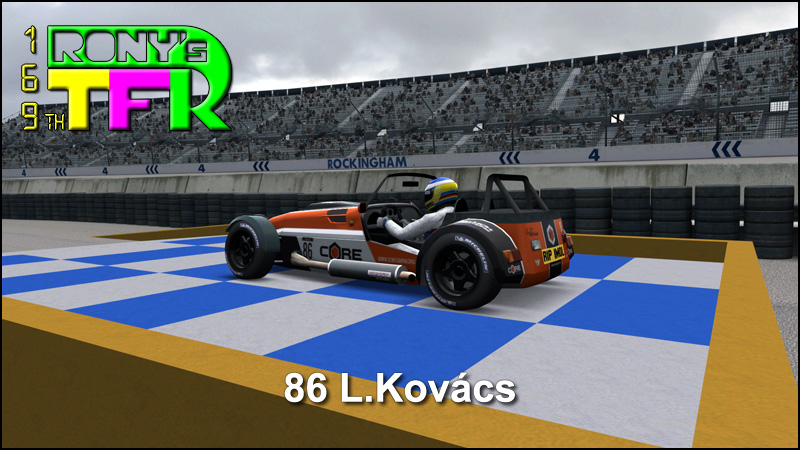 Tomorrow it will be 7 years since the very first RTFR being organized in international level and we have done a total of 169 races since then. And we're still having over-average attendance - during all previous events the average is 14.5 racers per event,yesterday there were 18. So up to another year in the simple organized racing!

And for the first time in last 12 events there is a winning streak - the winner of last years final race L.Kovács dominated also yesterday's race,picking up his 3rd win,4th pole position,4th fastest lap and 4th top5 finish. He is now 11th driver to have a winning streak in RTFR,let's see if in 2 weeks he can extend it. R.Kardol came late in qualifying,still set 3rd fastest time and upgraded the position during race to repeat his best finish - 2nd,5 top5 finishes now in his account,Lukas Bohm Rosenbauer tried to chase him,but could not find pace to pass,so he had to settle for 3rd in his 1st appearance here. Rony had a lonely time on track for most of the race and picked up 67th top5 finish with his 4th place and Adebayor turned out to be the best of all the candidates racing for 5th place,3rd entry in top5 for him.

Again 2 weeks break between RTFRs,but in the server there will still be some activity - the winner of previous RTFR XL race selected a custom track for the next race (in 23rd january),meaning a test phase to figure out a good laptime for race distance calculations - server will be configured at some point today!
And there is another event for Race Green Events - the 7th season of All-wheel-drive Winter Series is set to start this sunday - all the information and signups can be found here: https://www.lfs.net/forum/thread/91737 - league involves AWD car racing in different conditions and awards the best 3 drivers during the season with small money prizes. Sounds interesting? Make sure you don't miss out the action!
lucaf 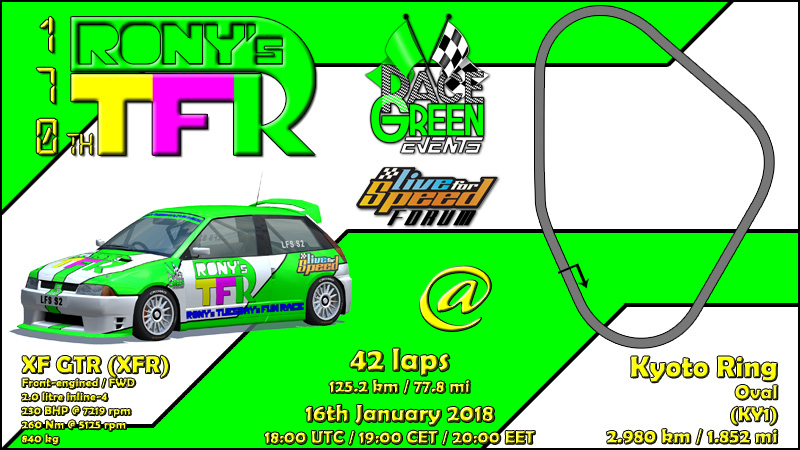 Server is up and running: Ronys Tuesdays Fun Race (feel free to spam the Airio top table with your laptimes)
Spiiiky

Too bad you support that lame bumpdrafting, I would've joined, but this makes no sense at all. 2 people can bumpdraft from start to finish and you can do nothing to catch them. Sounds like a lot of fun, right.
UnknownMaster21

It is fun in my opinion.

EDIT: Sure that would be more interesting if length is halved and start grid is being randomized. Not everyone indeed want to bumpdraft with everyone.
Kid222

I didn't try bumpdrafting with XFR, but knowing the car behaviour itself + netcode, sometimes i think it is a bit unstable. Isn't it dangerous-ish to bumpdraft with XFR anyway?
Eclipsed

Neither you can do something if these 2 do a perfect slingshot-draft,so your point is? It's oval and with this heavy draft we have in LFS,it's always good to have a pal in field. Also - bumpdraft is something that can go horribly wrong with a little mistake or small network fluke (a.k.a. technical failure in simracing),so the chance for everyone is still there.
MicroSpecV

I support serious bumpdrafting (not just random bumps at corners, or like a heavy ram from behind).

If two leaders tandem draft and seem to be pulling away, I'd drop back a little and get a 2-car draft from the car behind to catch up. It's all tactical - and it's why NASCAR has lifted the restrictions on bumpdrafting.
Eclipsed

Due various reasons 170th RTFR will be postponed by 2 weeks!
Racon

Joined : Mon, 25 Dec 2006 11:53
Posts : 946
Online at :
PiranMOTOMiniOval
Other cars driving off into the sunset without breaking a sweat whilst you turn in the drive of your life just keep them on screen between corners? Welcome to the other end of the grid!

Excellent! I mean for me only, of course!
Eclipsed 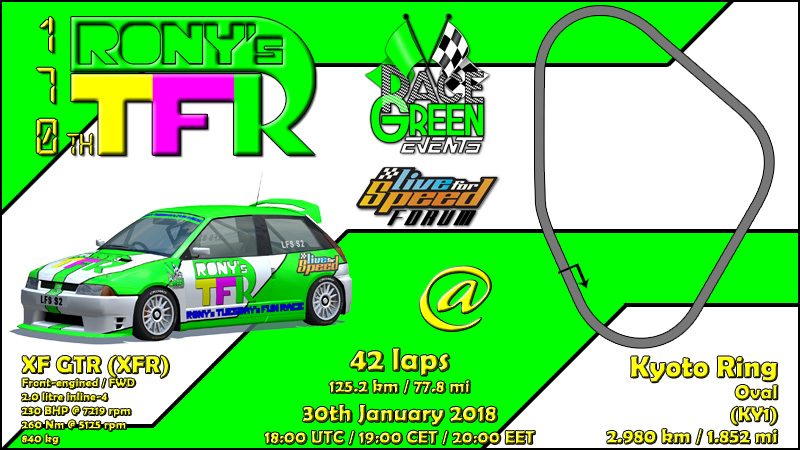 Server is up and running: Ronys Tuesdays Fun Race (feel free to spam the Airio top table with your laptimes)
Litro

Hell yeah! I will try it!
SA-White

Hey m8's.. What is pass on the server?
Eclipsed

So much thx m8
Litro

Oops, forgot about it 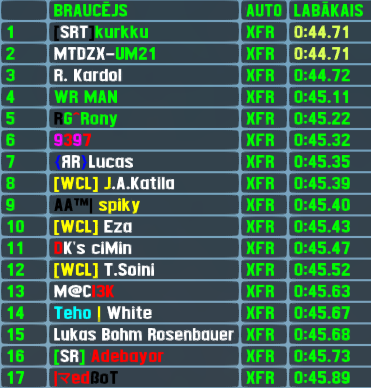 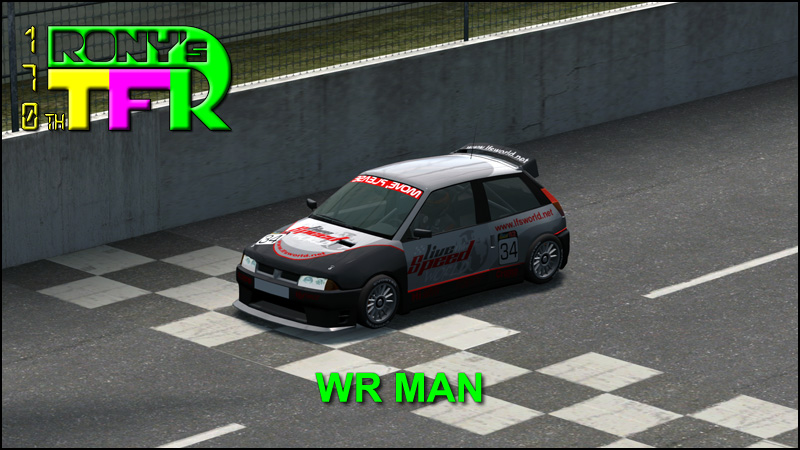 * PENALTIES :
DK's ciMin - receives a WARNING for unsportsmanlike behaviour during finish stage of the race. Repeated offences will lead to race ban.
[WCL] Eza - receives 20 seconds penalty added to finish time for pit exit line violation on 2 occasions. Additionally he receives 1 lap penalty for causing an incident by pit exit line violation and under blue flag condition. This sums up to 2 laps penalty.

Oval racing has always been different,making different names than usually being high players in the event. As usual the oval race had one of the top closest finishes,this time it's the 4th closest finish with calculated time of 0.054 seconds,it was also 19th race with margin of victory of 1 second or lower.

The world record holder of this combination named himself WR Man yesterday and entered the event - he proved that being fast alone is very helpful also when in actual race,as he took his 2nd RTFR vicory,also setting his 3rd fastest lap of the race and 5th top5 finish. It was also 40th win for Finland. Cimin was the winner's drafting partner for the late stage of the race,pulling away from the rest,but he was outraced on the final straight to finish line,2nd place finish and a warning for unsportsmanlike behaviour for the newcomer. Rony was in lead group earlier,but got dropped off it around half distance,3rd place finish and collected 68th top5 finish. Kurkku used the chance on hanging on 2 best bumpdrafters during qualiying and got his 1st pole position,but during race he could not keep up with lead group and also was dropped off,ending with 4th place finish,which is great improvement previous best finish - 17th. M@CI3K finished 5th in his 1st appearance here.

RTFR now takes the 2 weeks break and will return with one of the road cars,but between now and then Race Green Events offers another opportunity to race - already this sunday we have the 3rd round of AWS 2018 - Westhill Street Cup is a race on support roads of Westhill Raceway using RB4.
Kid222

Oh look, something Ade or Lukas aren't good at! 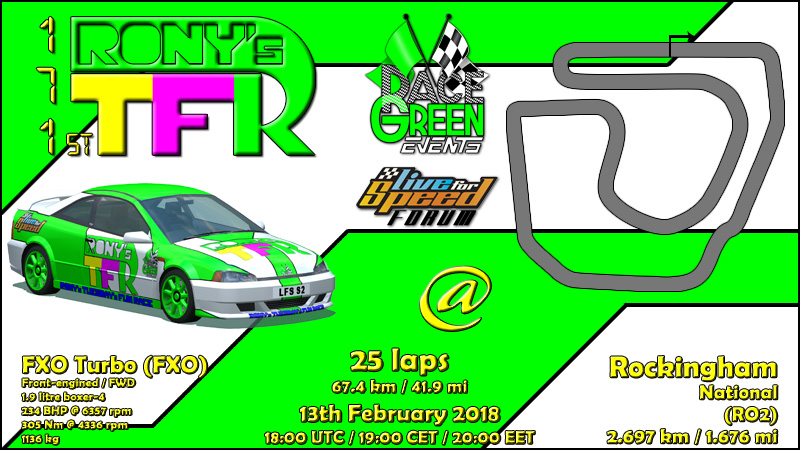 nice track, I'll try to be there!
Spiiiky 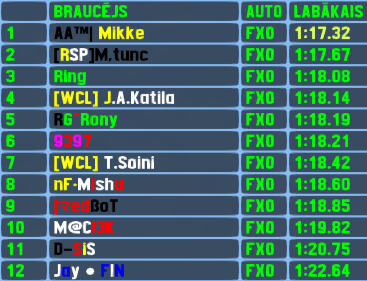 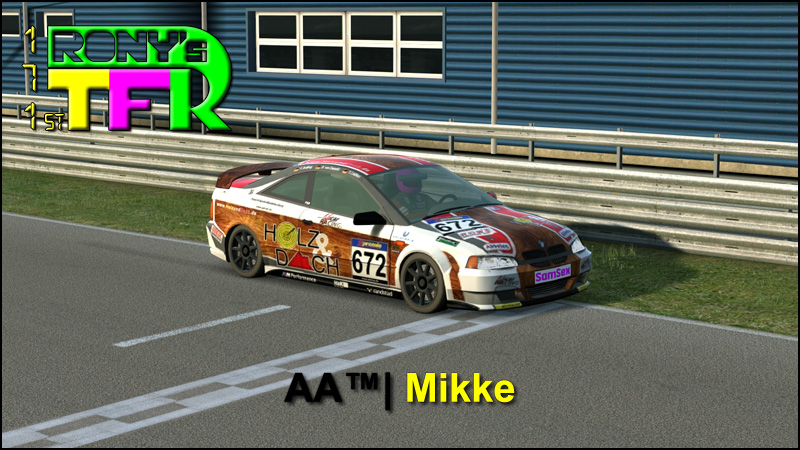 This was a relatively difficult race requiring a lot of patience in terms of tyres - many had trouble with the fronts getting glowing red (of course just graphically in F9 menu),some lost positions because of this problem,some just pace. As always there was someone,who was better than the rest,this time it was Mikke,who led every single meter of the race and finished unchallenged,taking his 2nd win,pole position and fastest lap of the race,also increasing his top5 amount to 4. 9 seconds apart was Ring,who repeated his best finish and collected 7th top5 finish,another 9 seconds apart was 9397,who upgraded his previous best 6th position to 3rd today. 4th was Rony collecting his 69th top5 finish and top5 was closed by J.A.Katila who rounded up his top5 count to 10.

Race Green Events action continues sunday with 4th round of 2018 AWS - Winter 200 featuring FXR race at Kyoto Oval,already next tuesday RTFR XL is scheduled with FBM race at Aston National track,which should be relatively easy combo. And the normal RTFR will return in 2 weeks with a race with some of the slick tyre cars - there should be something interesting for most racers!
lucaf

Such a shame no more ppl joined the event, wich was held on maybe the most interesting layout of Rockingham. Nevermind, it was good for me, my first top5 position in RTFR

Congratz lucaf, you are getting better and better