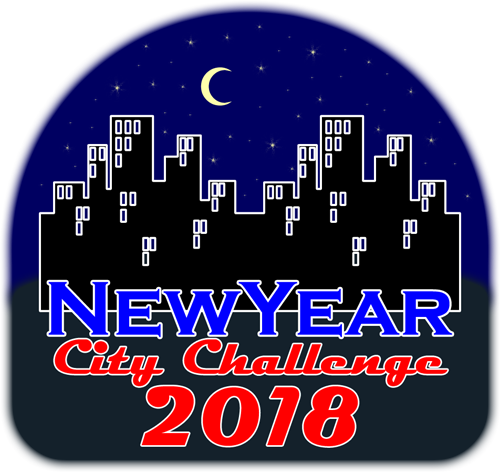 Just like last year,the new season of AWS starts in South City with NewYear City Challenge. This round has been in AWS schedule every year so far and this is the 2nd time it's run with RB4. This year the race will be held in sort of easiest configuration,but it still has the narrow chicane in it,meaning that one lapse of concentration in the specific track section will end with plenty of damages on the car. Tyre issues? For experienced RB4 drivers these are no news - front right tyre might be screaming for cool air if you're not careful with it!

From last year's top 6 championship drivers only the champion has not signed up,meaning the competition will be similar as last year with few series rookies mixing in it. Last year's round winner finished 2nd in standings - a good proof that if you wanna be on top,best time to start is right away!

Hmm, the field might not be as empty as it looked at first!

New entries will receive PM eventually at some point during weekend.
michal 1279

Not sure if I'm able to attend most of the rounds though...
Holle 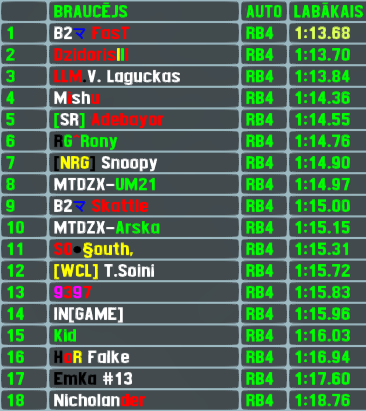 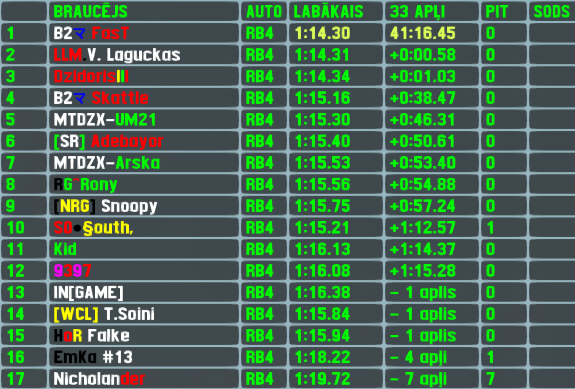 That was some good stuff, thanks to 9397, who kept me on the alert, while i managed 70+ temperatures on the right front.
Eclipsed

I could have made top4 baltics in the given situation,but unfortunately damaged my car already in lap 2,causing about 1s per lap lost time... Practice is overrated,concentration not.
lucaf

After watched replay, and the mess Nicolander caused in first corners, I say my opinion that he hasn't enough experience to join such races.

I'm also very confused about motivation of Lefteris4 - he joins the event late, starts from pits, does couple on laps, and then leaves his car in the wall. Seeing that car in the wall every lap was distracting - I was thinking every lap when that guy take that car and makes something silly with it.


Yes Kid, that was quite a challenge to chase you, I pushed more and more every lap, but you did also

Very annoyed with my ISP that's having issues. Watched some through lfsremote though, seemed good!

I agree on both - first turn i got smashed into by Nicolander, who casually proceeds to the space where i am at that moment. I would advise to practice more in online (or offline, given the state of online racing) and watch around for other cars.

As for Lefteris, that was just weird.
lucaf 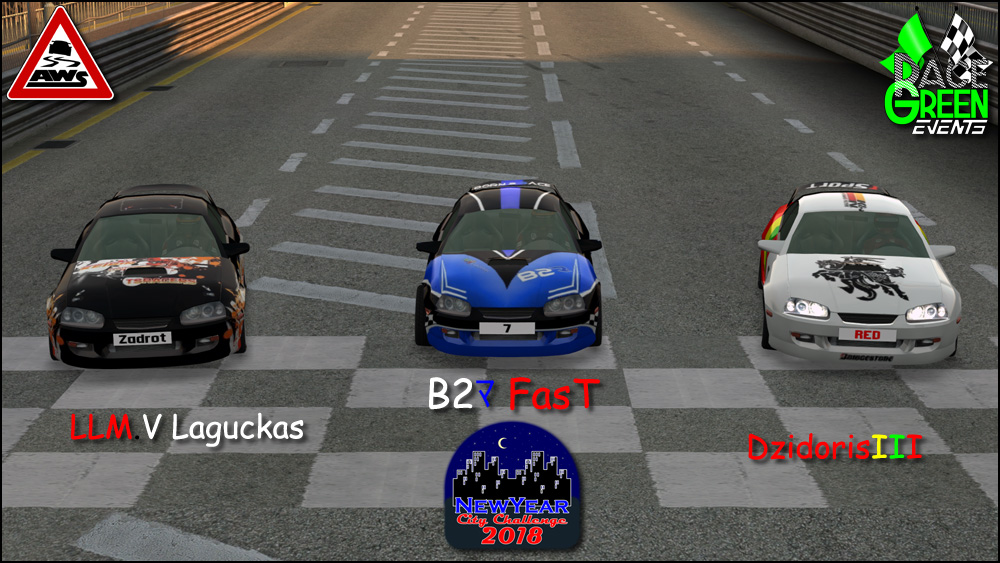 The first round of of the new season was held practically under the yellow,green and red flag of Lithuania - 3 drivers of this country practically dominated both qualifying and race. At the end Fast was the best of them,as he managed to make the important pass in lap 22 to retake the early lost lead,which he was able to defend until finish line,Fast picked up also both bonus points for fastest laps in both sessions. V.Laguckas spent the most race distance in 3rd place,but used a situation in last lap to upgrade his position,finishing 2nd. Dzidoris slipped by the polesitter in turn 2 and led the race for 21 laps until polesitter finally found the way to pass him. Dzidoris didn't gave up and tried to retake the lead,in final lap he tried so hard that he lost also 2nd place in process - was he too greedy or was it just a fluke,it's up to him to analyse.

After round 1 overall standings are of course the same as the race results - Fast leads the lithuanian trio with 4 points gap to V.Laguckas and 6 points gap to Dzidoris. Fast also has lead in Rookie of the Year standings - with 7 points gap to Skattle.

With only 2 teams having more than 1 driver attending,Teams Championship is led by both these teams - Born 2 Race is on top with 11 points gap over defending champions MTDZX with LLM in 3rd another 3 points back. When looking at newest signups,it seems like LLM is getting some reinforcements - let's see if the situation will change with their help. With 3 lithuanians filling the podium there are no doubts which country is leading the Nations Cup standings,as they scored all 30 possible points. Finland trails by 14 points while Chile became the 1st southern hamisphere country to be in top3 of AWS Nations Cup standings.

A total of 18 drivers joined 1st round of 2018 AWS,the number probably will drop in next round as some do not like it - slick tyres on unpaved surface is not really a proper combination,but years of AWS has proved that it is very drivable when using an all wheel drive car! The AWS "classic" round Blackwood Rallycross Grand Prix is next in AWS menu,with some preperation everyone should find a way to keep control over the car in the slippery conditions while keeping the tyres cool-ish in grippy conditions.
Kid222

Wow, i was wondering about the South's pitlane exit, for like one second, before i had to focus on defending and taking T1 again. So that's that it guess.
matrxs

This is due servers restarting themselves for unknown reason,shame on provider...
Updated config of server,now the combo should stay even after restart.
Justas.S

Sadly was not able to participate for the 1st race, hence signing only now

Could anyone share set for this madness? Couldn't find anything anywhere.
Eclipsed

Welp, this is either going to be complete death OR some nice angles. Or both, I'll go for both
1
2
345
This thread is closed