Tauro and me did use fe1 setup.
Huskii

I was more just cruising around the track, mainly racing Gegg tbh, was quite fun having banter with Gegg during it in discord. Deffo gonna come again.
k_badam

Fun combo, shame i didn't have any time to practice.... I was fast, i was just making too many mistakes.
Eclipsed 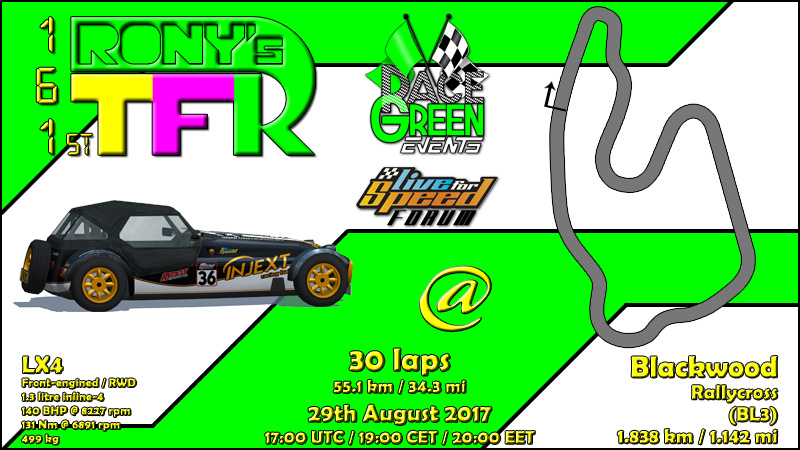 Server is up and running: Ronys Tuesdays Fun Race (feel free to spam the Airio top table with your laptimes)
Texpelt88

Does anybody livestream the event? As a dri er or admin spectator?
Eclipsed

Hasn't been done for a while - in past year or so only Mandula did it,he hasn't joined the event for a while.
Eclipsed 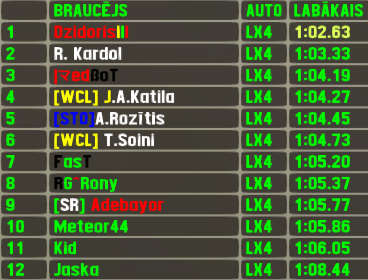 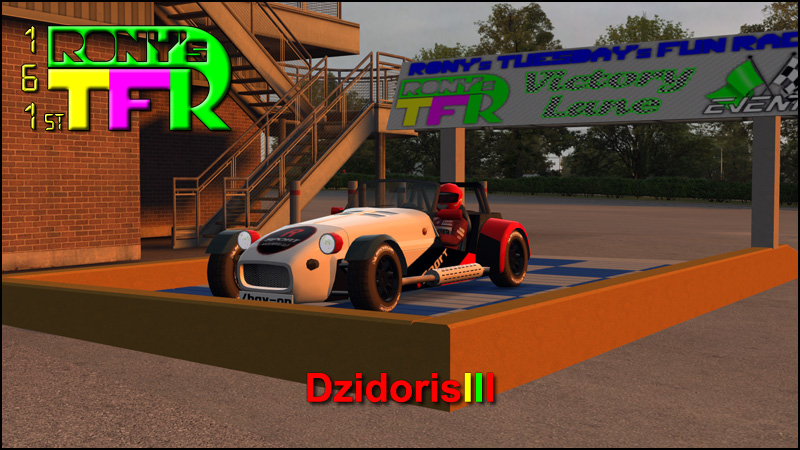 It has been a looooong time since last rallycross race in RTFR and just 2 weeks shorter time since last lithuanian driver celebrated a victory in this event. So we hit 2 flies with one stroke yesterday - we had a rallycross race and a lithuanian winner. Dzidoris set his evening objectives early in qualifying and it took a while before someone could get at least close to his laptime,in race he led every single lap,but the advantage of 6 seconds at finish is not that dominating as expected before,but still - in his 5th attendance he picked up his 1st win,1st pole position and already 2nd fastest lap of the race,increasing also amount of his top5 finishes to 4. R.Kardol was the only other driver to beat 1:04 laptime and probably never had any doubts about his 2nd position - repeated best finishing position and also 4th top5 finish for him. Best of the rest and last driver on lead lap was A.Rozītis,this 3rd position was his 3rd visit in top5,4th was Rony,collecting his 63rd top5 finish,but top5 was closed by the indian driver Redbot,who improved his previous best finishing position by 3 positions,while best qualifying position was improved by 5.

2 weeks break from RTFR action,then we will return on solid stuff with some of the racing cars,stay tuned for details in weekend before it!
Eclipsed 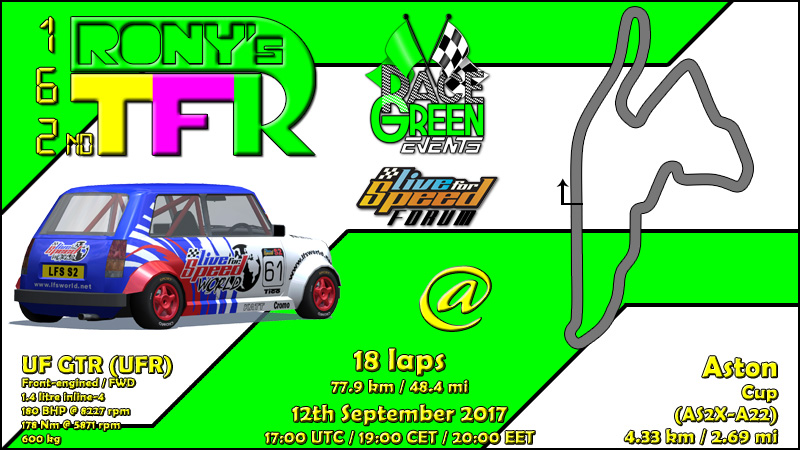 Server is up and running: Ronys Tuesdays Fun Race (feel free to spam the Airio top table with your laptimes)
Huskii

Ow... One day to practise..
Eclipsed 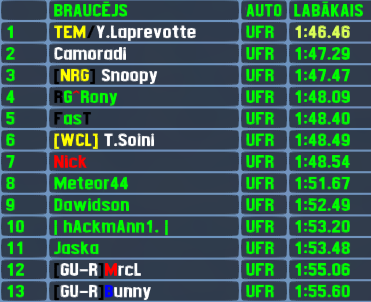 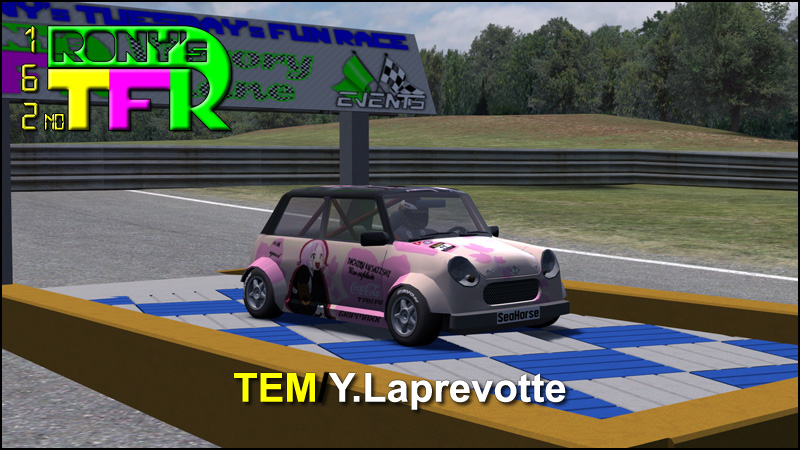 During qualifying it seemed like Y.Laprevotte has no competition in 162nd RTFR,as he had a safe gap to rest of the field,but just before qualifying end the only 2-time UFR winner A.Wiśniewski joined,allthough started from back of the grid,it was matter of few laps before the polish driver catched race leader and even passed him,taking 1 lead lap,but few mistakes destroyed his chances and Y.Laprevotte could race towards his 12th RTFR race win,while the pole position was his 8th (tied 4th most with A.Wiśniewski),27 top5 finishes in his stats. A.Wiśniewski's midrace ride into outskirts of hilltop s-turn's exit lost a lot of time,even if he was able to cut the leader's advantage massively,he run out of laps for a shot to retake the lead,so he only gains 14th top5 finish and 10 fastest lap of the race. Rony was able to use confusion in first few turns and slipped to 2nd place,later losing position only to 2nd place finisher,64th top5 finish in his book,Snoopy finished 4th,repeating his best finish result in his 4th top5 finish,while he improved his best qualifying result from 4th to 3rd. Camoradi started from front row,but could not defend the position,dropped down early,5th place finish in a race he called "a one to forget" - still 8th entry into top5 finishes column for him.

In 2 weeks RTFR will return for some street car action,but already next week RTFR-XL will return from the usual 4 weeks break,we'll have a LX4 race in the seemingly most popular Rockingham configuration - ISSC,more details soon!
Eclipsed 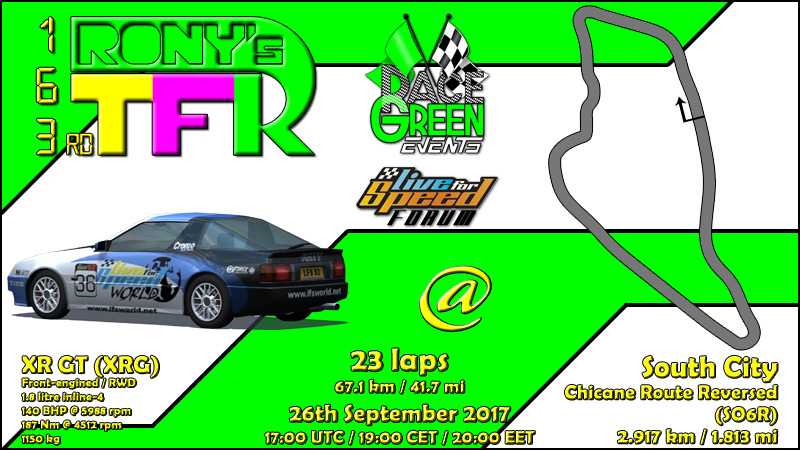 Server is up and running: Ronys Tuesdays Fun Race (feel free to spam the Airio top table with your laptimes)
expr

Just a heads up regarding the event time ("17 UTC/19 CET/20 EET"). Whilst that template has probably not caused too many problems in all the years it's been in use, it is still misleading: CET is always 1 hour ahead of UTC (and EET +2). If someone would, for whatever reason, choose any other than the posted UTC time to convert from, they would miss the event – you can see that by just asking Google to do the conversion (cf. correct time) (even though all European countries actually using CET actually observe summer time, the convention has been to give summer times a distinct time zone name, which is why computers don't second guess your question, even during summer time).

As you said - it hasn't caused any problems until now. I suppose everyone knows that the reffered CET/EET time means current time (of the date),either summer or winter. If someone is still confused and not sure - UTC time is deffinitely the one to use. Or just look in leagues calender,where everyone can see the time for his current timezone.

Well TBH you wouldn't really ever display both CEST and CET at the same time. Only S times during summer time, and vice versa.
Eclipsed 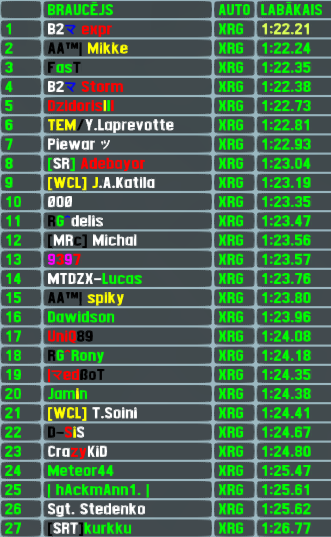 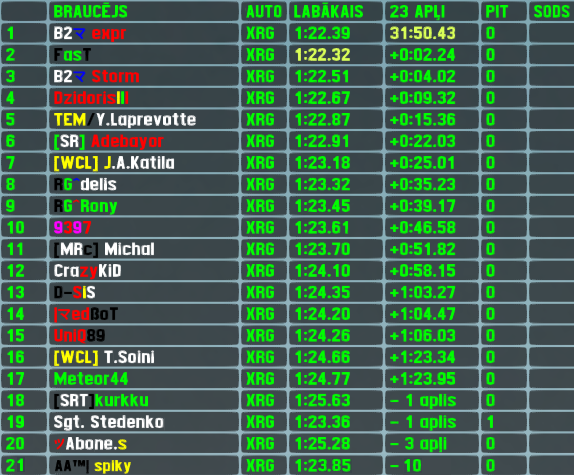 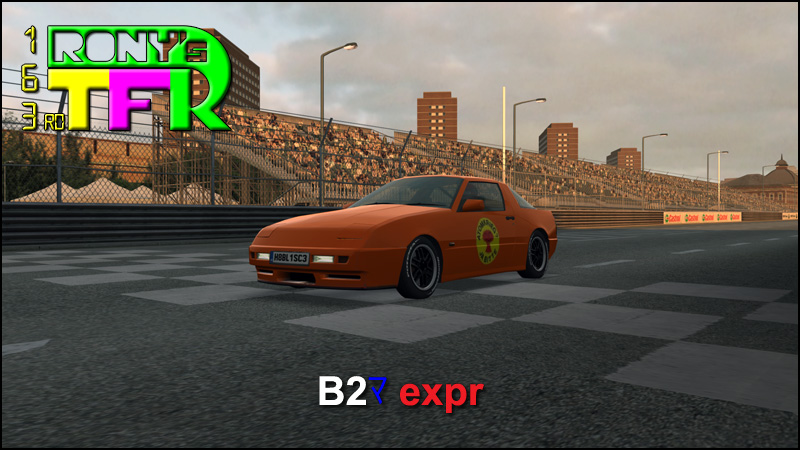 Advertising activity of some GTi enthusiasts resulted yesterday's event being tied 3rd most attended in RTFR history,setting also new XRG attendance record,allthough beating previous XRG race attendance just by 1 participant. More drivers mostly means also higher and tougher competition,where practically everyone had their matching opponents. But track did not offer easy overtaking possibilities,probably one of the reasons why winner was leading every single lap of the race - the first time participant Expr was the fastest in qualifying and never gave up lead on his way to victory. Fast was the fastest when looking at fastest race laps chart,but it wasn't fast enough for race win,so he had to settle for 2nd place in his 1st started race here (3rd qualifying already),winner's teammate Storm took the lowest podium position,repeating his best result,5th top5 finish in his stats. Also 5th top5 visit for 4th place finisher Dzidoris,but defending winner Y.Laprevotte closed up the top5 with his 28th entry there,tying Litro for 3rd most top5 finishes.

RTFR now makes 2 weeks break - next is normal RTFR with one of the slick tyres wearing racing machines,a week later RTFR-XL will have a race in South City Industrial Long track using RB4 - custom track test phase will begin next week. But already this sunday there's another activity from Race Green Events side - the 3rd season of V8 Racing League will begin with a race in same configuration as this RTFR event was held,but just in other direction,more info and signups in V8 Racing League 2017 forum thread: https://www.lfs.net/forum/thread/91421!
UnknownMaster21

"Fast was the fastest when looking at fastest race laps chart,but it wasn't fast enough for race win"
MousemanLV 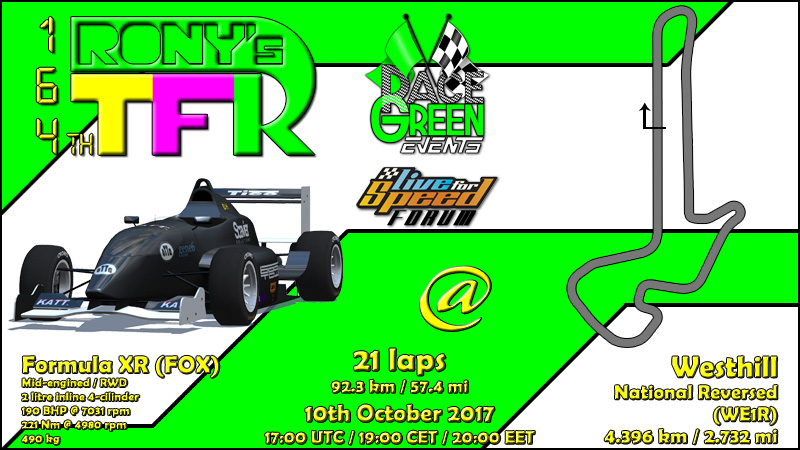 Might have to come to this one, awesome combo!
Eclipsed 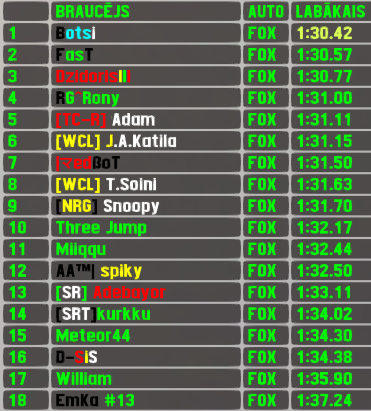 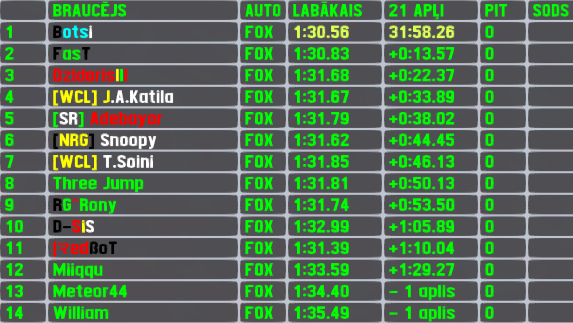 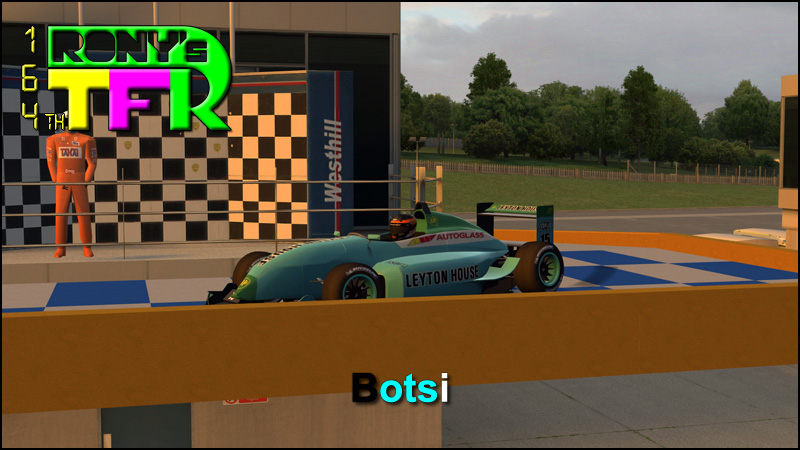 Formula in the Westhill National configuration could almost be described as a new classic combo - it feels so much suited. And yesterday we had a race on such combo,in reversed track direction though. One of the biggest single seater experts between active racers dominated yesterday's event - Botsi collected up full package,adding to his stats 6th win,7th pole position,6th fastest lap of the race and 17th top5 finish. Fast was the only one,who managed to be leading the race besides winner,allthough just for couple hundred meters,still a strong 2nd place finish repeating his best result,but he got 1 position improvement to his best qualifying position as he qualified on front row,2nd top5 finish for him. His compatriote Dzidoris finished 3rd,collecting up 6th top5 finish,4th was J.A.Katila,8th top5 finish for him and with the smallest gap to driver ahead top5 was closed up by Adebayor,who finished in top5 for the first time here,imroving his previous best result by just 1 position.

Usual 2 weeks break between normal RTFR events,but already next tuesday RTFR-XL is in the calendar,offering a rare opportunity to race a South City costom track - Long Industrial configuration. More info will follow this evening. But between then and now there's another RGE event - V8 Racing League round 2 of the 2017 season,also featuring a custom track,layed out in container field of Blackwood. More info in VERL thread or over this site's calendar.
Eclipsed 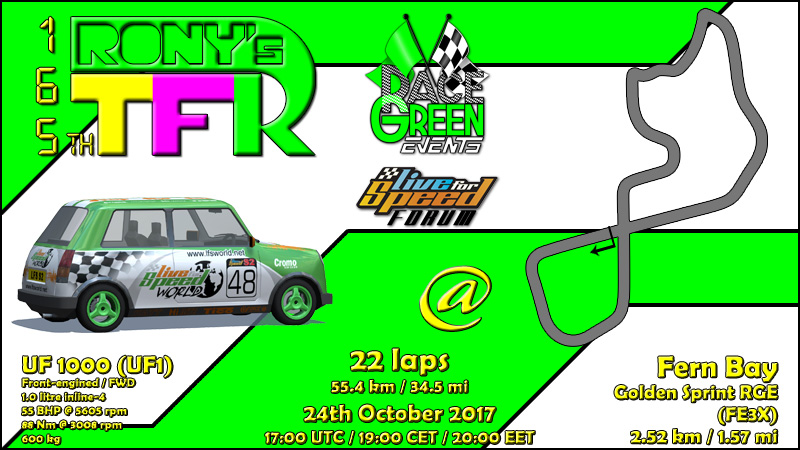 Server is up and running: Ronys Tuesdays Fun Race (feel free to spam the Airio top table with your laptimes)
Spiiiky

That was a lot of fun.

I am sorry for Adebayor though. I watched replay and that dude who crashed him was intentionally going for full speed crash in T1. After the race he even said that he did not brake at all. I am in work now, so can't post replay nor name of the driver. Rony, could you please look into it? (#protest)
versis

. Impressive pace by Yann and FasT.

I had a look at the replay and was equally surprised by Ring's behaviour, literally just braking as he wrecked Adebayor in T1, no immediate apologies, not even letting him past after the incident. Definitely worth a protest.
Bila_KHS

Guys, i was pised off but now i'm having a shet on this ;p literally

Punch was bad, trully making me off the race, bcs my phase was good and thinked that i will end in top5 at least. sometimes you are just in wrong place on the track

hope to see you next race