Thanks!
If you want to observe my poor driving skills and my crappy stream, go ahead 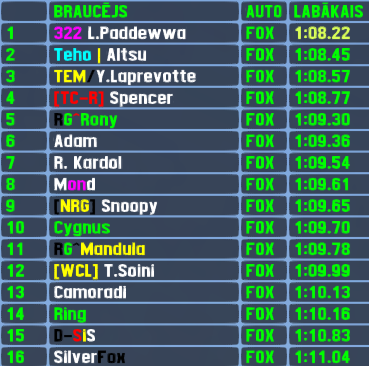 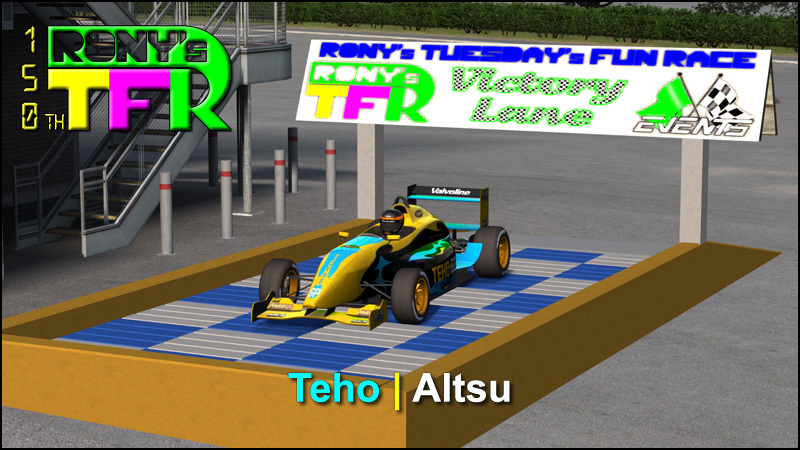 Quite a classic combo was offered yesterday in new coating - it was the first RTFR race in default configuration of refreshed Blackwood. Just like 2 weeks ago,L.Paddewwa was the fastest in qualifying and again for some reason did not convert this into win - he left the server when restart vote triggered race start,rejoined server when all cars were on grid and never gave a life sign... So it was up to someone else to take over and it was Altsu - he started from 1st position,but lost few places during first few laps,so he had to repass few cars,last of them just with 4 laps to go. Altsu is now the 57th member of RTFR winners club,3rd new one this year,he also scored first fastest lap of the race and 1st top5 finish. It was also 30th win for Finland. Y.Laprevotte took lead in lap one,was able to break away,but the 4 seconds lead wasn't good enough and he had to concede to Altsu,but 3rd most successful driver of RTFR still finished 2nd and scored his 21st top5 finish. R.Kardol completed the podium with his 3rd place finish for the 2nd race in row,doubling also his top5 finish count. After 6 races long top5 dry streak,the organizer finished 4th,taking his 58th top5 finish,while even longer (14 races) top5 dry streak was ended by T.Soini,who took his 14th top5 finish with 5th place finish yesterday. Meanwhile T.Soini has taken 2nd place in both most starts and finishes table,he still needs 6 qualifications to overtake Litro and take 2nd place in this chart too.

This race was the least attended race since 138th RTFR,let's see if one of the street cars awakens more interest in next RTFR 2 weeks later.
versis

Oh dear, top spot on the list of shame (yellow/blue flags)... anyways, glad that Snoopy is shown on the race result board so I didn't come last :-D
mbutcher

I'm kinda gutted I couldn't make this one, it deserved more drivers.
Eclipsed 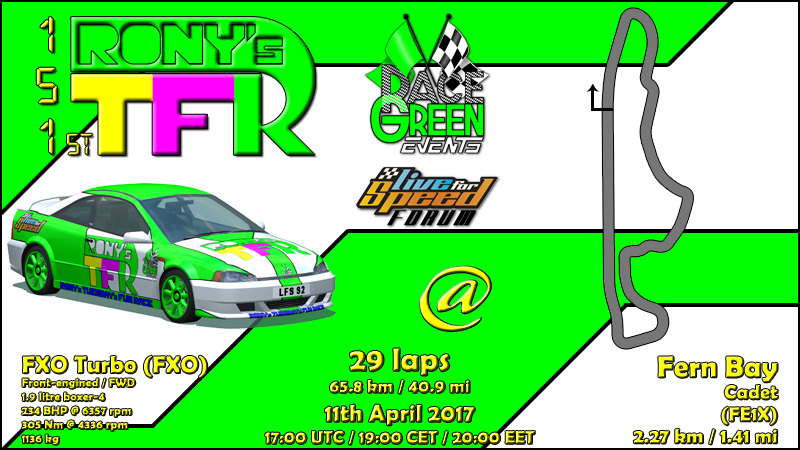 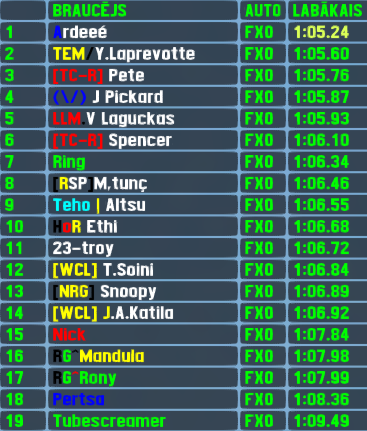 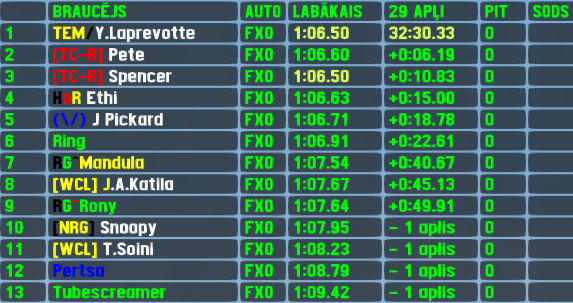 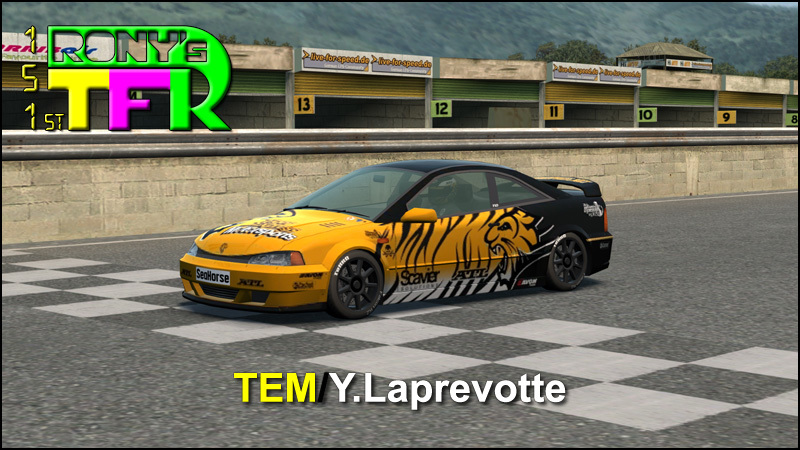 In qualifying Ardeeé was the fastest and scored his 5th pole position,he started fast the race too and set also his 4th fastest lap of the race. But then he "had to go" - he quit right after finishing 8th lap and still stays most successful winless racer in RTFR - with already 3 pole positions more than 2nd in this chart,someone,who appears to be not Frank. Enough about those who quit,now about drivers who can finish the races,first of them of course is the winner of yesterday's race - Y.Laprevotte kept things cool to stay in lead from taking it over until the finish line,scoring his 9th win and 22nd top5 finish - he is now 3rd most successful racer of RTFR by margin of 3 wins. Winner was followed by 2 TC-R racers - Pete was the faster one,finishing 2nd and collecting up his 20th top5 finish,but rating leader Spencer finished 3rd,also increasing his top5 finish count to 20. Ethi finished 4th,which is his 1st finish in RTFR from 2 tries,J.Pickard closed up the top5,7 top5 finishes in his account now.

19 racers qualified,just 15 started,seems like some did not like the combo after testing it during qualifying,let's hope they like next one 2 weeks later,which will be held with one of the slick tyre cars. But already next week XFR is on the line for somewhat longer race in the RTFR-XL 4th race at Aston custom track combining AS2R and AS1. Info will be out soon.
Eclipsed 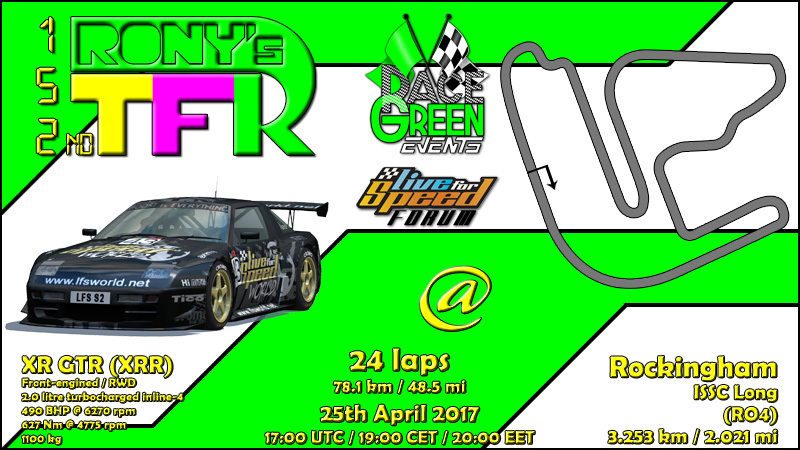 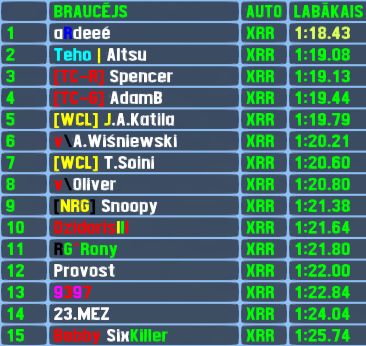 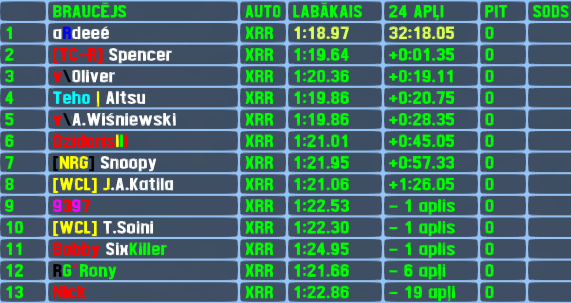 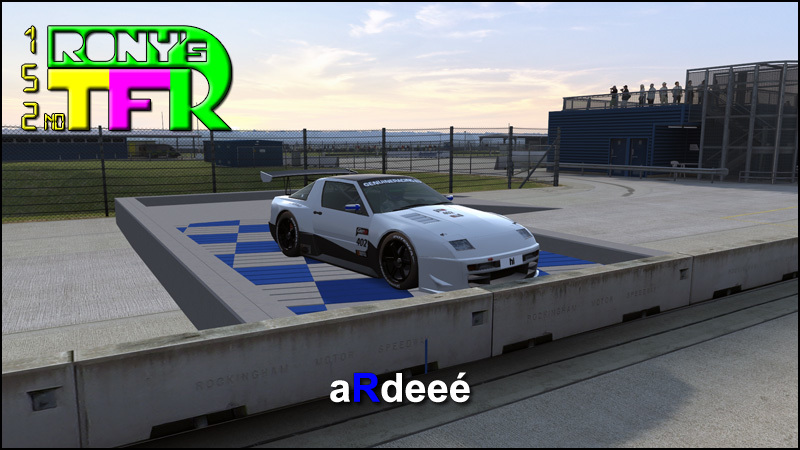 In the next evening after CityLiga there was another race in same track,but we were using car much more challenging then the tamed FX3 - full power XRR deffinitely was a great workout for everyone's skills,allthough not too many took this challenge. In Qualifying Ardeee scored his 6th pole position (only 3 drivers have more than 6 of those),but for the first time in RTFR he was able to convert it into victory,becoming 58th member of RTFR winners club. Ardeee collected also his 5th fastest lap and 4th top5 finish. With this win Finland ties Latvia in most wins per nation chart with 31 wins each and also Finland passes Latvia in nations success table. Just over a second short of win was Spencer,who could have prevented all this,as the winner was rolling over finish line without power,but the gap was just too big,so rating leader finished 2nd,21st top5 finish for him,3rd was Oliver with his 5th top5 finish. Previous latest winners club entry Altsu finished 4th doubling his top5 count,while 5th was 2nd most successful driver of RTFR - A.Wiśniewski,finishing in top5 without winning the race for 3rd time,making it a total of 13 top5 finishes.

After usual 2 weeks break RTFR will return with another race,as usually we will switch again back to road cars,which and where - to be announced in the weekend before the race as usually.
Eclipsed 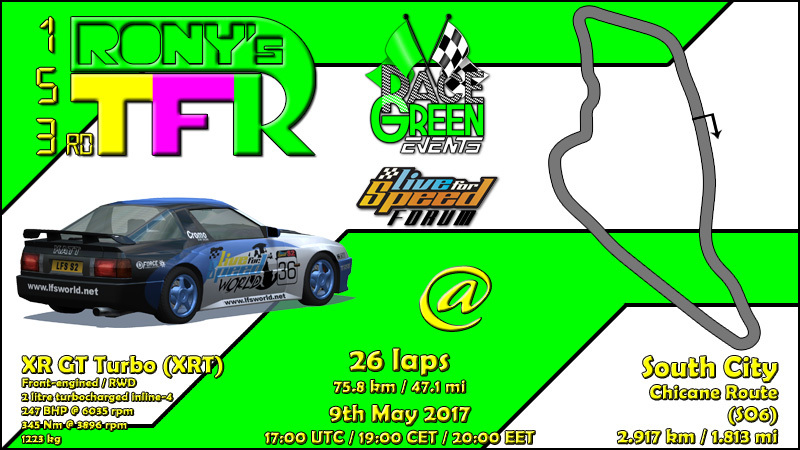 Would love to race that combo, so pity I'm working during that.
johneysvk

Does someone have a replay? would like to check those chicane pileups out
themes016 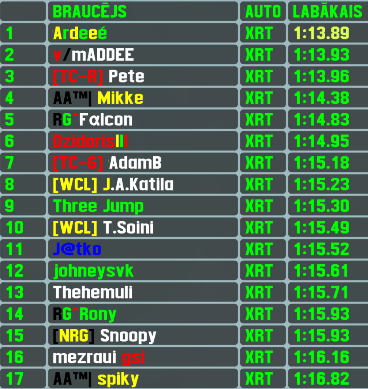 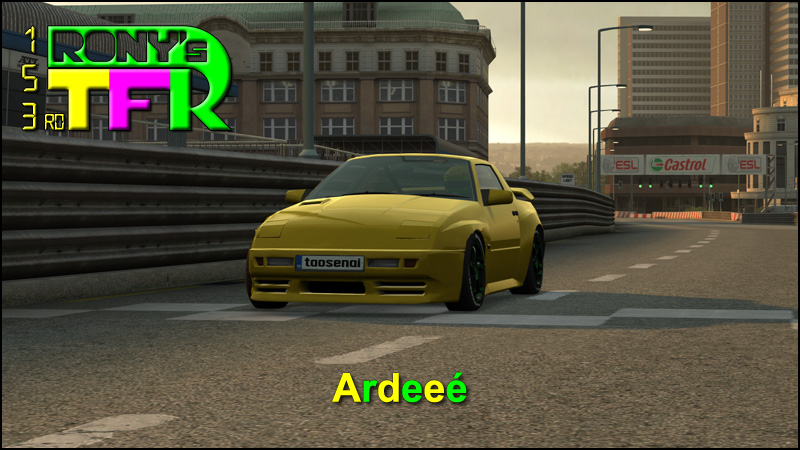 2 RTFR races have been held in this configuration and they had an average of 51% finishing rate (including RTFR's all time lowest 43.8%),so yesterday's race actually wasn't that bad. Statistically speaking. But still - stuff turned out to be quite messy from early on.

After being barely faster than his closest rival in qualifying,Ardeeé had a relatively easy race as he broke away from the pack and had 25 hotlaps to complete. To sum up his achievements additions,he has now 2 wins,7 pole positions,6 fastest laps and 5 top5 finishes,he is also the 10th driver who has won back to back races. If the winner had a lonely race,2nd place finisher had a complete opposite - Troy joined the server just after qualifying and as a previous winner had the right to start the race from back of the grid - he passed everyone but the winner and as 5th most successful RTFR racer picked up his 11th top5 finish. Falcon was one of the "lucky" ones,who could break away from the main pack when it started to get messy,he had few position gains and drops,but finished 3rd at the end,collecting 32nd top5 finish (still 2nd most),Dzidoris was the other "lucky" break away,but his luck run out early in final lap where something,what seems to be either technical problem or distraction,made him lose 2 positions,so he had to settle for 4th place finish,which is still his best result out of 2 attendances. Last but not least - after having a fair share of adventures,Three Jump finished 5th,it was his 1st ever start here,allthough already 4th qualifying.

Most likely we will have more elbow space on track in the next RTFR race in two weeks and also faster cars too,but first there's the other event ahead - already next tuesday we will have the XL version of RTFR,featuring the fastest aids free car of LFS - Formula V8,raced on Westhills longest and fastest official configuration. Detailed info soon!
three_jump

Would it be possible to stick with a car class for 2 or 3 races in a row? With the little amount of driving I do these days, it would make things a lot easier

a bit late can i enter?
Eclipsed 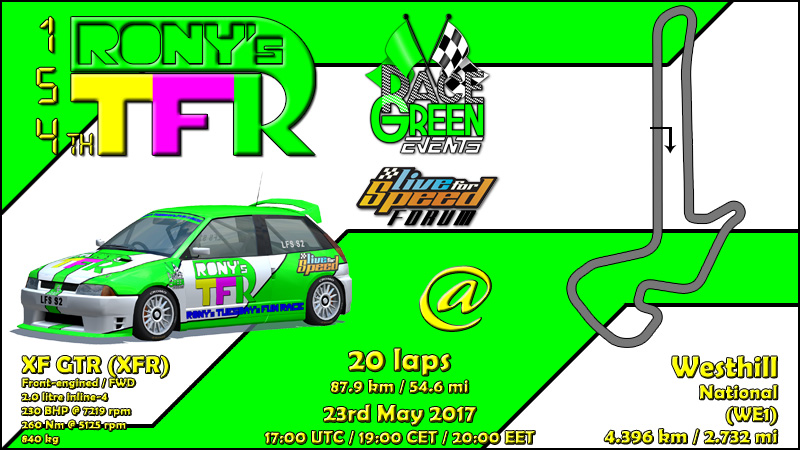 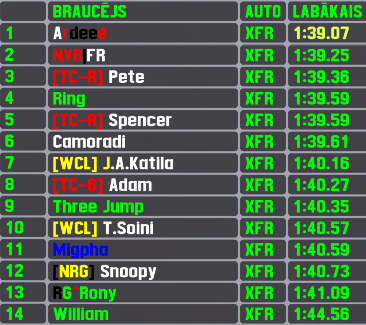 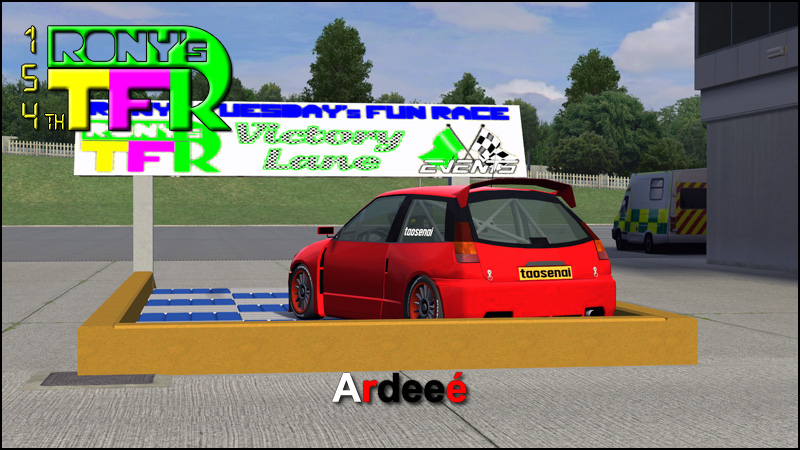 With this race Ardeeé is now the 3rd driver in RTFR history who has 3 back to back wins. In qualifying he scored his 8th pole position (tied 3rd most) and the win was also his 3rd total,6th top5 finish. But in late stages of the race he wasn't the fastest on track,his 4 seconds gap was reduced to single second by the driver who set his 3rd fastest lap of the race - Pete. Despite the effort,Pete finished 2nd,scoring his 21st top5 finish,followed with slight gap by his teammate Spencer in 3rd place,who has now 1 top5 finish more. Ring finished in same position he started - 4th,adding 6th top5 finish to his stats,while J.A.Katila increased his top5 finish count to 4 with 5th place finish yesterday.

This was the more elbow room promised 2 weeks ago,let's see if we can decrease it again in 2 weeks,where one of the street cars will come to race,more datails as usual in weekend before! Also next race will show if Ardeeé can make history by repeating all time longest win streak - it has been done only once before,when Agent won races from 42 to 45.
Eclipsed 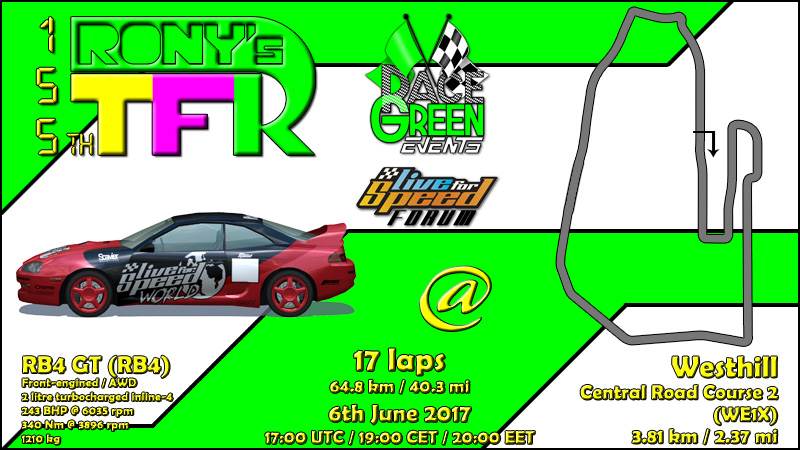 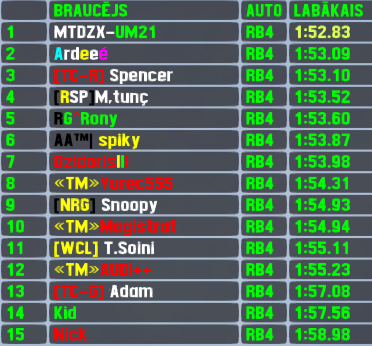 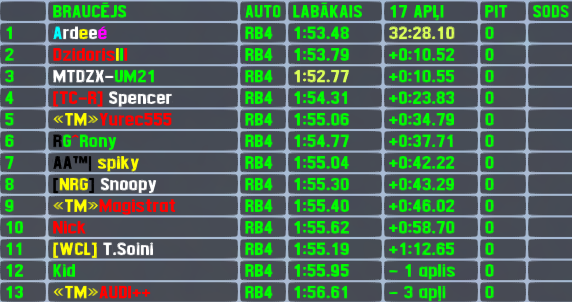 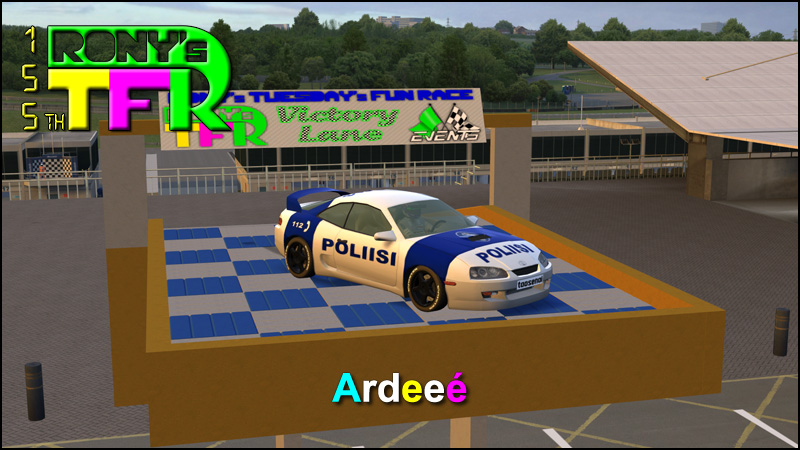 This was a return of an already used custom track,this time without the slow and twisty section seen at the RAC race at 114th RTFR,but probably the easier car was the main reason in attendance increase between that race and the latest one. Ardeeé was on a streak,but very late in qualifying his best time was beaten by UM21,putting some pressure on the streak owner. But the intrigue seemed to be vanished right after race start,as Ardeeé was faster than polesitter in run for 1st turn and took the lead he never gave up and celebrated his 4th win in row,reaching Agent's all time best streak. It was also his 7th top5 finish. Dzidoris joined late in qualifying,but the AWS RB4 Master 2017 found his pace early and at the end was 2nd in results,which is his 2nd and also best visit in RTFR top5. Fastest on track was UM21 - he set fastest laps in both sessions,but was not able to convert his pace into victory and finished just 3rd. Still this event brought him his 1st pole position and fastest lap of the race,also it was his 10th top5 finish. Rating leader Spencer finished 4th,increasing his top5 amount to 23,but first time participant Yurec finished 5th.

A tighter track was still quite fun to race,even with difficulties to pass,let's see if we have some variation for the next RTFR in two weeks,but that's not the next race we offer - already next tuesday the XL version offers some LX car racing,info is already posted,make sure not to miss this one if it sounds interesting for you!
Eclipsed 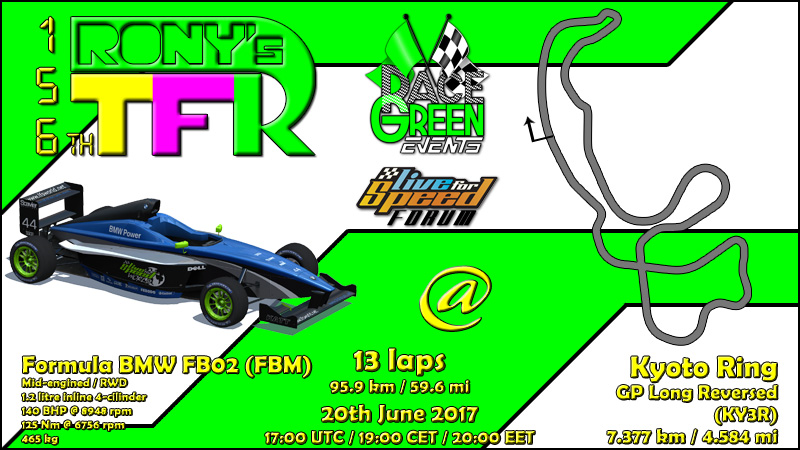