Sorry for the stuttery video (sometimes), I don't really know the reason behind it ...

That looked exciting and very nice looking layout enchancement for the slippery parts of the track. Thanks for the vid! Really nice to watch pro guys racing.
UnknownMaster21

I should had taken R2's To attack as much as possible.
Gutholz

On next tuesdays http://www.virtualgp.es/ runs a formular cup with FBM. The times are so that one can first drive in RTFR and afterwards there.
</hijack>
Eclipsed 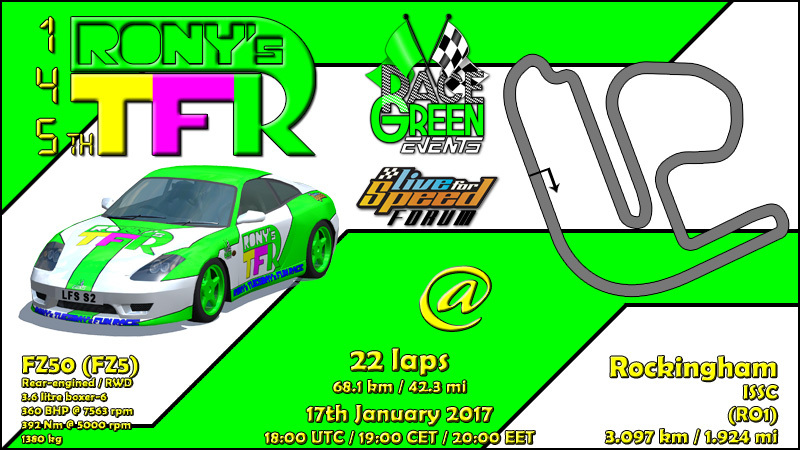 Now that will be interesting! For me, at least, because FZ5 is my least driven car

pity.. couldn't join this time, my wife's sick... cool combo as usual! hope to be back next time
Eclipsed 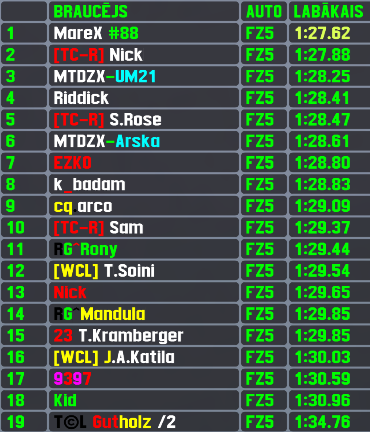 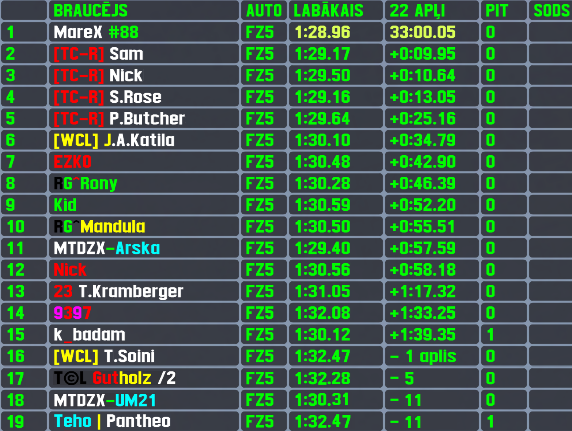 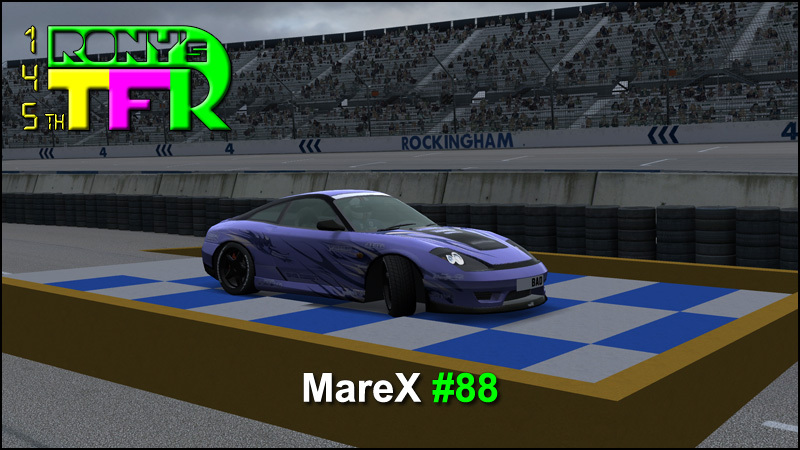 
No,it wasn't cool - it was quite hot combo in terms of tyres. Some were able to deal with it better,some not so good,that why we could see difference in quite few drivers' performances during the race. But someone was able to keep things cool and defended his combo's fastest driver's honor,as the current world record holder fast fastest in both sessions,picking up his 4th pole position,2nd win and also 2nd fastest lap of the race. Also it was 12th time Marex finished in top5. And he was the only one of top5 finishers,who does not belong to [TC-R] mob - Sam was the quickest in their inner battle and repeated his best achievement - 2nd place finish,6 top5 finishes now into his stats,remaining podium position was taken by defending Rockingham race winner Nick,3rd top5 finish for him. Rating leader S.Rose finished 4th,adding 17th top5 finish to his achievements,late joiner P.Butcher climbed up to 5th place from back of the grid,18 top5 finishes now into his records.

As usually in 2 weeks we will have a slick tyre race,BUT - the break between RTFRs has been cut in half this time,as the new version will be launched next week - RTFR XL,offering racers longer race of same format. Information about race combo should be posted during next 2 days.
k_badam

and your greedy defenses
lucaf

Last morning I decided not to participate since I found the track&car far too difficult to me. The day before I tried to put some laptime in Airio table, and got frustrated when getting tyres overheating after three laps.

However found myself visiting the server one hour before qualify, and then thinking 'why not give a try'; I did two long stints before the race and got confidence to join it.

The race itself was enjoyable. After the traffic of first lap I just tried to follow Gutholz who was keeping quite similar pace than me. I tried to balance my speed between chasing him and taking care of tyre temps. Fortunately I tried a 28 lap stint before the race, so I knew what it requires to keep the tyres drivable, though it was still challenging. Very good experience and I feel that my relation to FZ50 has evolved to another level.

When watching the replay, I was just amazed about the speed and consistent of MareX, and also the tyre control of S.Rose who surfed smoothly and fast with green tyres throughout the race
Kid222

I was very happy to get some good setup and managing to set the traction control to the point, where i could be fast-ish and not drift too much. Still, i am very surprised with the result.

Lucaf - my race setup was made like 10mins before the qualification, at least the final version of it. I was testing all kinds of stuff and it was hard to understand whats going to last all 22 laps with decent pace, and the setup I made was 50/50, kinda fast, but couple unwanted slides and the tyres are gone together with race pace, so basilly it was all about throttle control.


I forgot that FZ5 has it

I would probably tried to use it
Did TC-R guys used it?
lucaf

Is it ok to post replay here? Ok there it is, race replay. I used strong traction control because of keyboard acceleration and didnt feel its possible to take care of tyre temps without it.

Btw UM21 I wonder why didnt you pit to get fresh/cool tires? Or you could have just slow down (to get temps down), or make camber/pressure adjustments in F12 mode. Of course its very nice to watch in the replay how you managed to keep the pace with red tires (until it got hilarious).
UnknownMaster21

I was planning to make full attack to lead and maintain my own pace, but turn 1 killed my plan. Then I just only drive
Shikari_San

Badlvboy - none of us used traction control (:

Was a fun race, wasn't particularly hopefully of a good finish after joining with 15 mins of quali left and then doing badly in it but pleased with the outcome, tires seemed fine and relatively easy to manage. The set done well for being Nick's adjusted cruse set
Kid222

I did use traction control btw
Shikari_San

I mean none of us as in TC-R used traction, lol sorry about the confusion
UnknownMaster21

Well, after you(ME) re-re-read that post again, it actually could mean both as us(YOU) in TC-R or us of all. 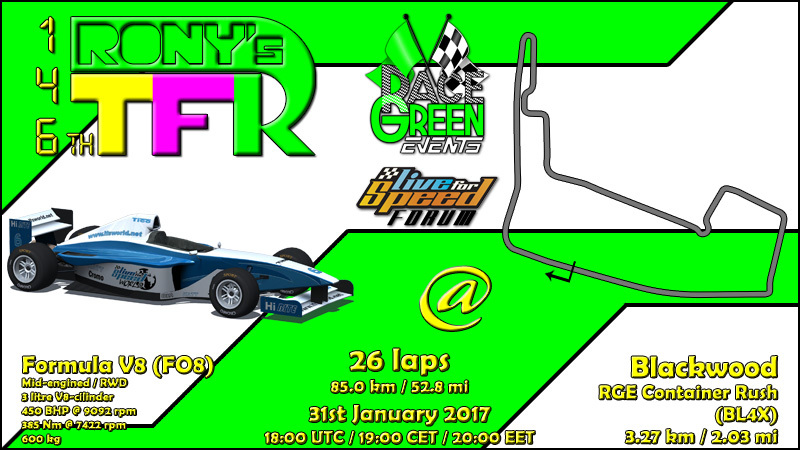 I'm gonna be outta town, but i will try to make time for this!

This combo is great