sure i can still find a way to roll it
UnknownMaster21

:o .... woot there must be smthing fun built on the layout

Oh.. I just picked Rockingham Oval for the next FM Event

Well, next week is going to be oval lovers' week.
Eclipsed

Yup,round and round it goes!

I have no doubt about that!

Thanks for info (since the FM guys are so shy with info here),let's see if I have time friday for the short qualifying,legendary 1.5 hours long FM-5-minute break and the race.

I can't make it tonight unfortunately. Wanted to try and get 3 wins in a row but I guess I'll have to wait 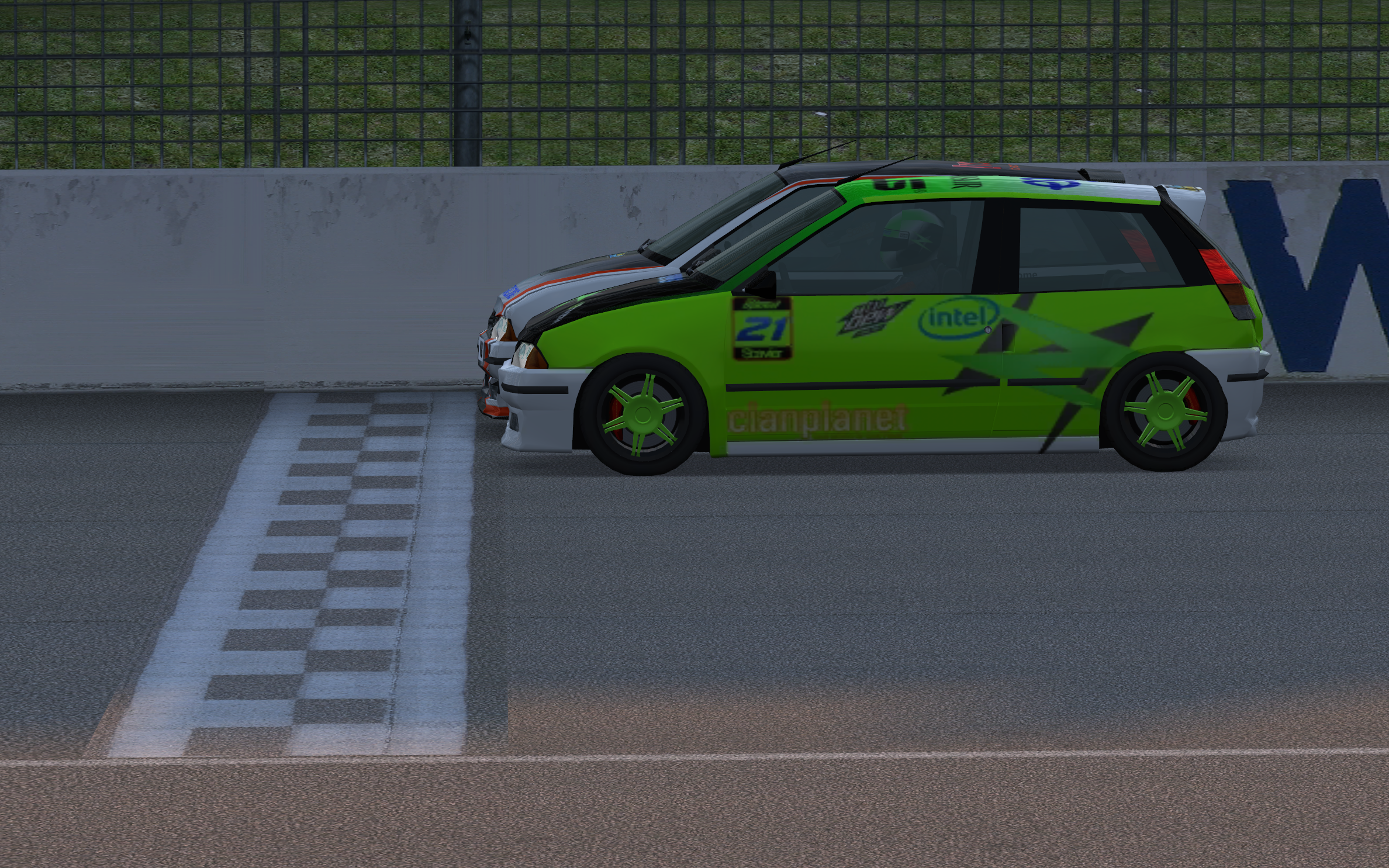 Forgot about this race.... My bad
UnknownMaster21

Ugh, I was even ahead but I either did attack too early, did choose line wrongly, or setup simply was not for that purpose ( made mean bumpdraft setup, for staying stable )

That, and this, were from Nick. Here is the frame where it said "Finished" since that wasn't at the visible finish line 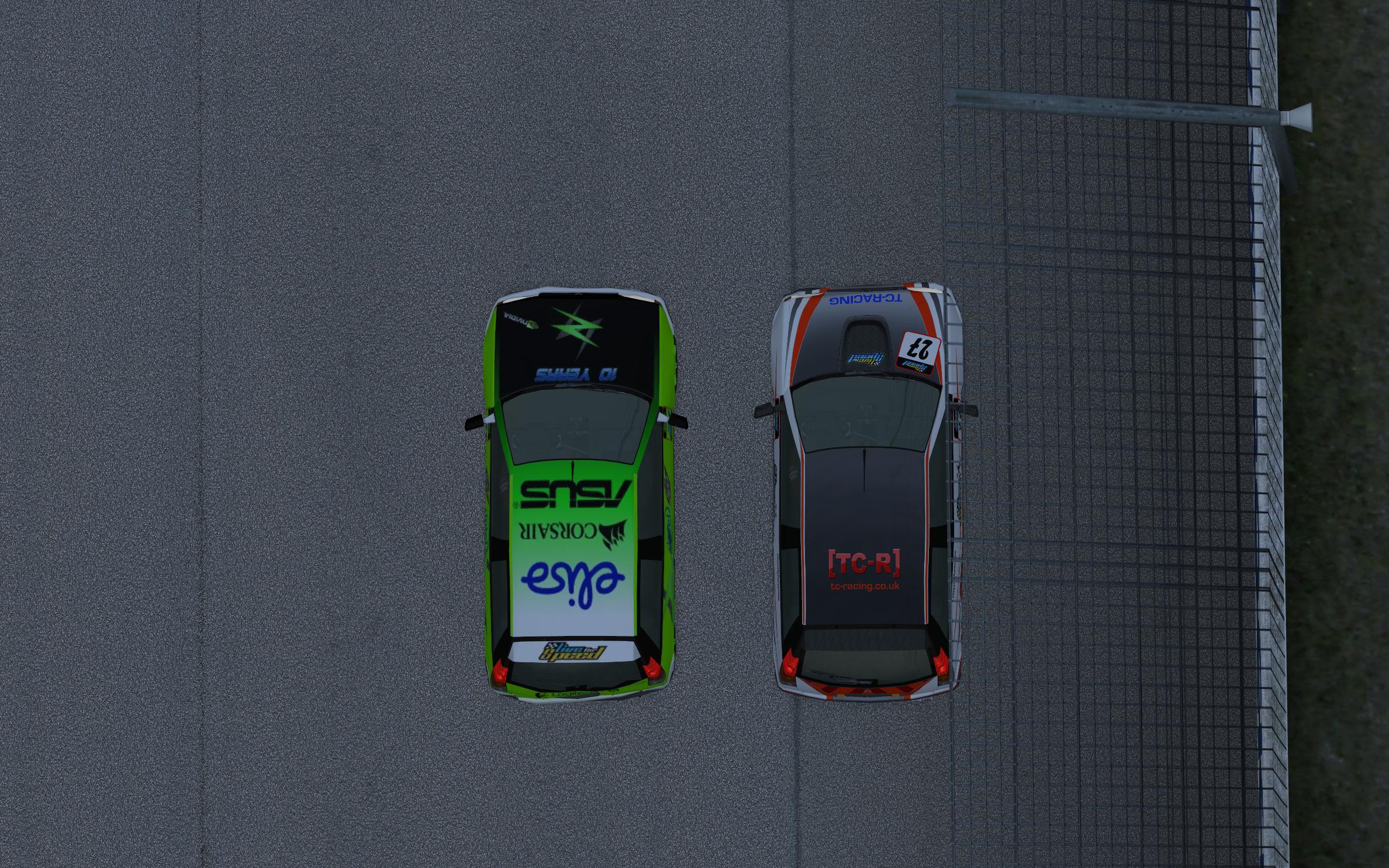 That pic tells all, looking on side mirrors, the difference was enough big
mbutcher 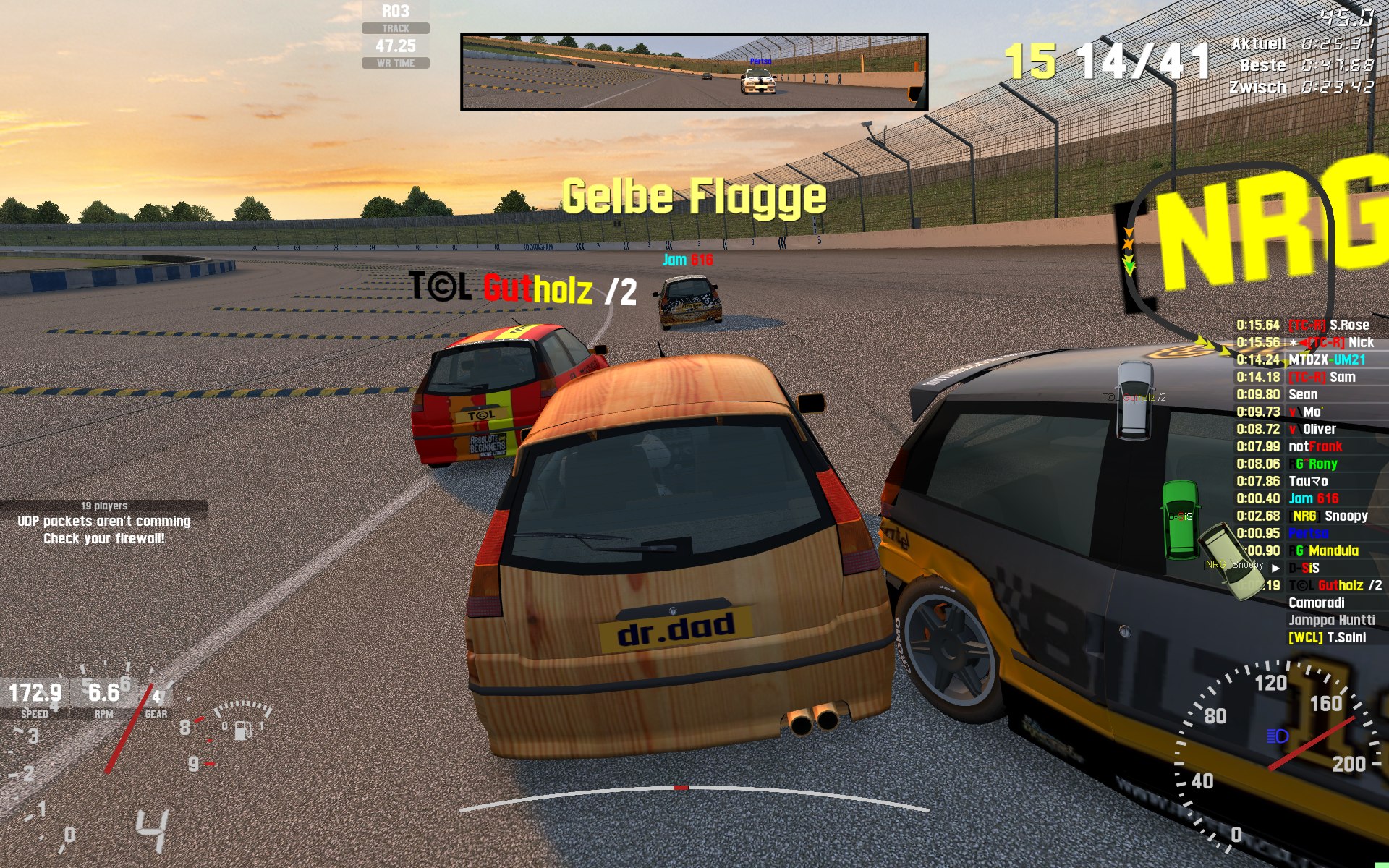 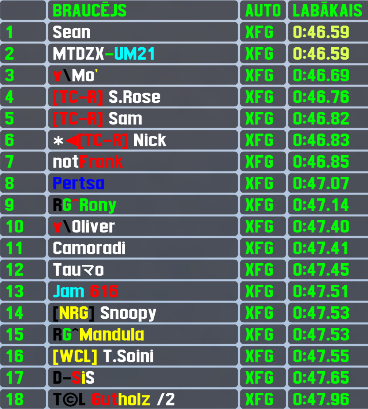 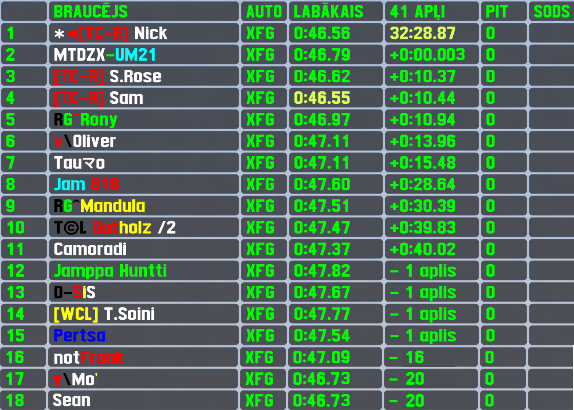 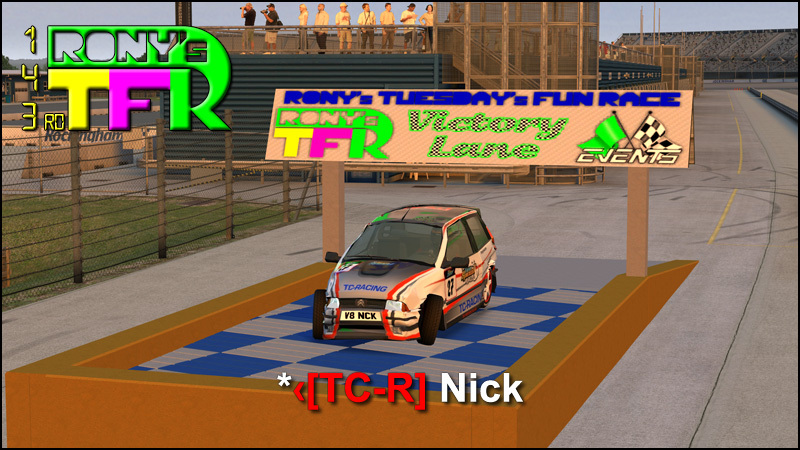 This is becoming a trend lately - last 2 races had a margin of victory less then a half a second and yesterday was no difference. Even more - the calculated (since LFS offers just 2 decimals all finish margins smaller then 0.10s have been mesured and calculated using distance between cars and their speed) margin was just 0.003 seconds,which is 4 times smaller then previous closest finish made at 56th RTFR,run with FXO at Kyoto Oval,won by FiredUp over M.Kapal. Here's the picture from that finish: 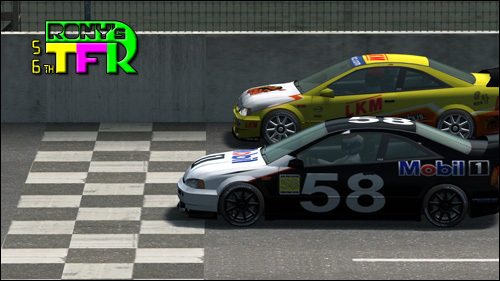 Pictures from yesterday's finish can be found in posts above. (but guys,please don't post high resolution png pictures weighting 5MB anymore - not everyone has unlimited 100Mbps connection. Please resize a bit smaller and save them as jpg to save some internet traffic for us disadvantaged people,who are using connection that was called slow alredy 10 years ago,thank you)

The race in oval was as always very unpredictible - bumpdrafting with XFG in the new Rockingham oval proved to be a bit risky,there were quite few misshaps leading to lost speed and positions,in some cases even motivation to continue the race. But the one who fights until the end can become the winner - the scottish driver Nick was behind UM21 when entering final turn,but good turn exit speed and drafting gave him the extra speed to squeeze his damaged numberplate over the finish line just ahead of UM21,bringing him and his country the 1st RTFR victory,also 2nd top5 finish for him. Nick is now the 54th driver into RTFR winners club,first new member for almost 2 months. 14 centimeters short from his 2nd victory,UM21 had to put up with just another entry into top5,which is 8th for him,the remaining podium finisher S.Rose finished 10 seconds behind the winning duo,adding 15th top5 finish to his stats. Just outside podium in 4th place was Sam with his 5th top5 finish,who also added 2nd fastest lap of the race to his achievements,but after long absence from high finishing positions,5th place was taken by Rony,who scores 57th top5 finish for himself. But there is another driver who has to be noted - Sean was the quickest (well,at least the first to set the fastest laptime) in qualifying,earning his first pole position here. Also worth mentioning - this race had a repeated number of highest race leaders in a single race - 4,the previous race with 4 different leaders was 24th RTFR,using XFR at the reversed old Westhill track.

With this RTFR finishes the year of 2016,there were another 25 races with 14 different winners,with attendance ranging from 8 to 26 drivers per round,mostly with higher then all time average attendance per round,which means that the tuesday's fun race still offers racing fun for quite many racers. And so we will carry on racing as long as there are enough enthusiasts for competition,next race will be after usual 2 weeks break in first tuesday of the new year,which will be run as per usual system with some of the slick tyre cars.

Before ending the post,I would like to plug in some advertisement about Race Green Events activities:
* in 26th december the 6th annual X-mas derby event This is Crashmaaas !!! will take place,which means that everyone will have the chance to smash their way to the victory through opponents,not just patiently find a clean way to pass. MORE INFO
* in 8th january All-wheel-drive Winter Series returns for it's 6th season,offering racing with AWD cars in very variating environments,ranging from full dirt track to high speed ovals. Some small prize money will be presented to best 3 racers for their efforts. MORE INFO
* a bit later in january the same old RTFR will expand it's operations offering a spin-off event for longer race enthusiasts. Interested? Stay tuned for more info about RTFR XL!

That's about it with the wall of text and infos,Race Green Events wishes you great upcoming holidays!
Botswanan Salama

Great to hear you will carry on organizing Tuesday races. It's the simplicity of race format, changing cars, and also the effort you put into race reports and statistics every time that keep RTFR going strong while other LFS racing leagues seem to fade away. Thanks for another year.
mbutcher

Umm.. it may be a bit late to ask, but does anyone have a replay of the last RTFR on RO Oval? You can send it in a PM, I would appreciate it

In case anyone else wants to see the madness:
MandulAA

thanks for the vid 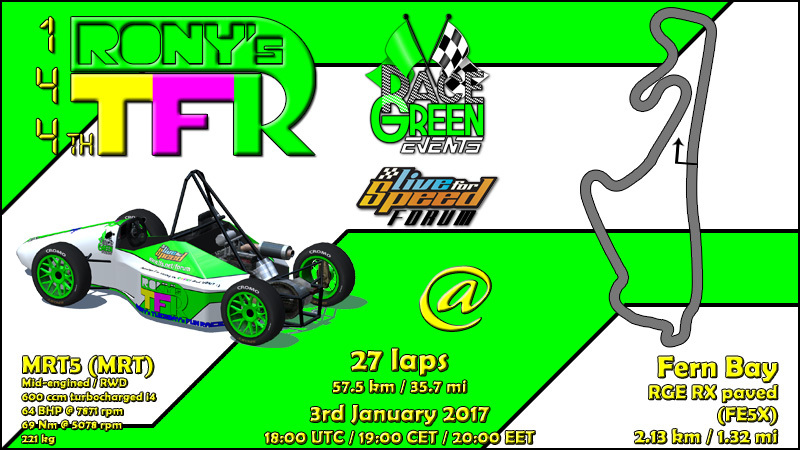 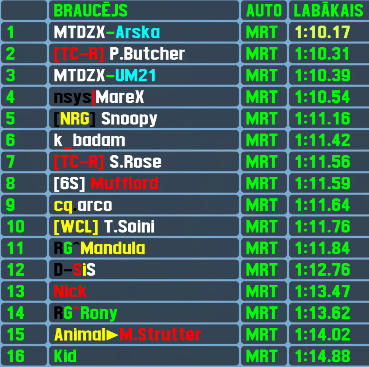 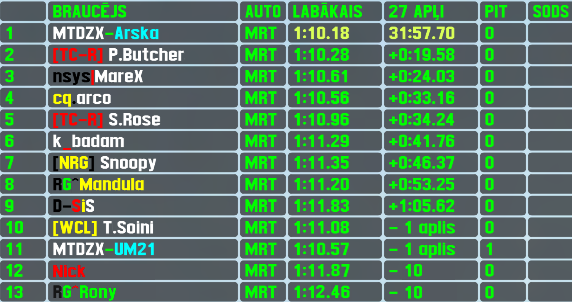 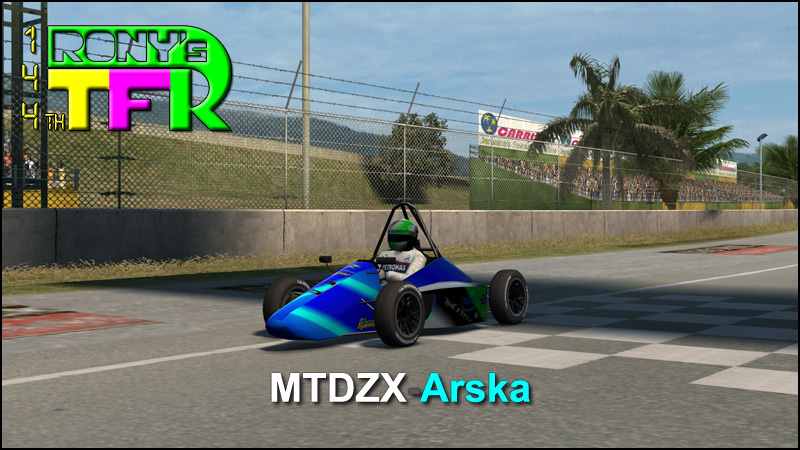 After last year's final 3 races beeing so close,first race of this year had a very convincing winner - with almost 20 seconds margin of victory Arska became the 55th member of the RTFR winners club. In previous 6 events his best results were 4th in qualifying and 3rd in race,but yesterday he upgraded his best achievements to 1st in both sessions and added also his first fastest lap to his stats,also it was his 2nd top5 finish. Interestingly he was the only driver in top5 who never won a race before. After completing 1080° roll,P.Butcher is rather lucky to keep his 2nd place,which is his 17th visit in top5,while Marex took the last podium step with 3rd place,11th top5 entry in his stats. Arco scored his 5th top5 finish by finishing 4th,but 5th was current rating leader S.Rose with 16th top5 finish.

I hope everyone had fun in the new Fern Bay track and I know that the car made the most trouble for many racers. But this is RTFR - we use all cars here,so it was time for one of the least liked ones,but hopefully in 2 weeks someone else will have the chance to race his favourite road legal car - who will be the lucky one and which car,yet to be decided as always.
1237121927333536
37
38394248545758