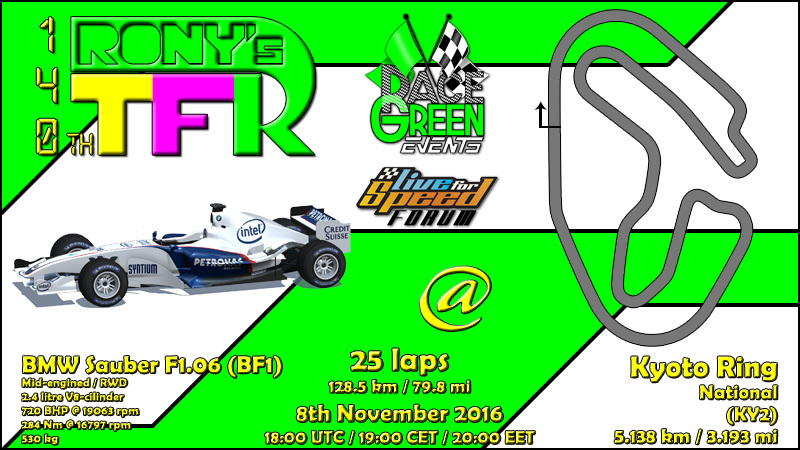 Important note: Due to daylight savings time change in Europe,event UTC time has been changed!

Damn, i would have loved to make this, but it looks like i won't

no can do
Eclipsed 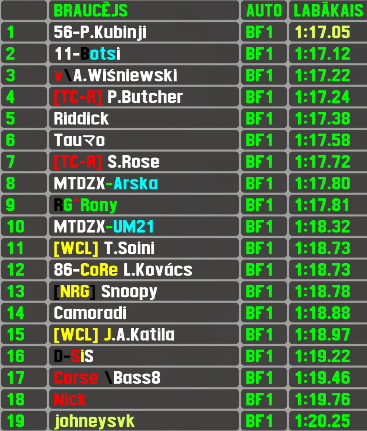 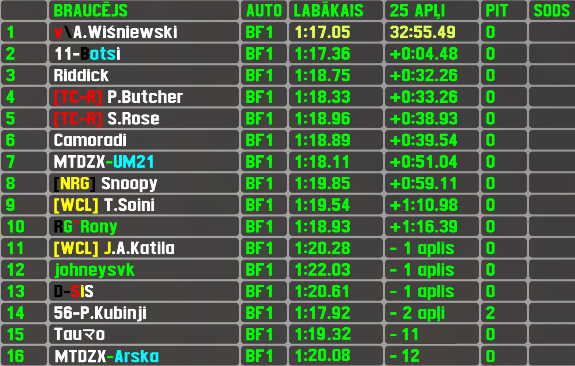 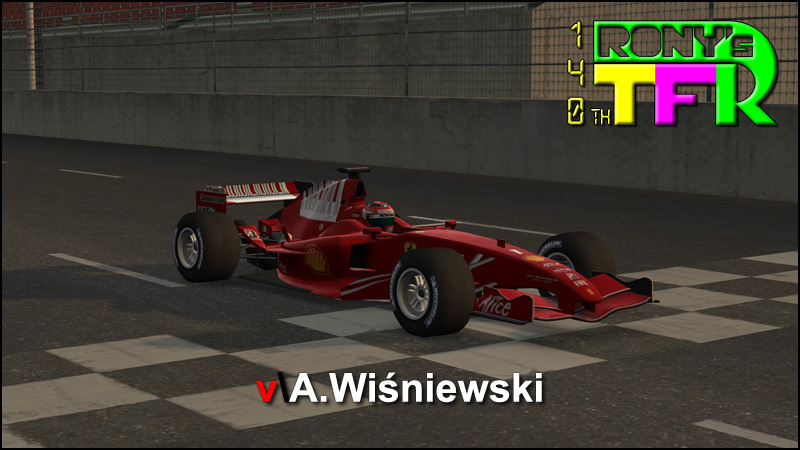 The freshly baked VERL Drivers Champion and yesterday's race's world record holder defended successfully his reputation and won the 25 lap race,thus becoming the 2nd driver to reach 9 victories in RTFR. A.Wiśniewski started from 2nd row and took lead in 3rd lap,which he never gave up,on the way to finish setting also fastest lap,which coincidentally was repeated server best laptime,set by qualifying winner. In A.Wiśniewski's stats now are 9 wins,9 fastest laps and 11 top5 finishes. Another single seater expert Botsi finished 2nd and as the last one withing half of a minute gap,collecting up his 12th top5 finish,3rd place finish was earned by Riddick,who finished in top5 for the 5th time. Rest of the top5 was taken by TC-R drivers - P.Butcher collected his 14th top5 finish with his 4th position and the new rating leader S.Rose finished 5th,13 top5 finishes in his account now.

After 2 weeks break we will surely decrease race speeds,as it will be hard to match LFS's fastest car's pace with pace with one of the road going cars,see you then on track!
pik_d

Any event this week?
Eclipsed

Yes,just the track is not ready yet,will post info this evening.
versis

cool, so basically no one can practice that much and I might have a chance :-D
Eclipsed 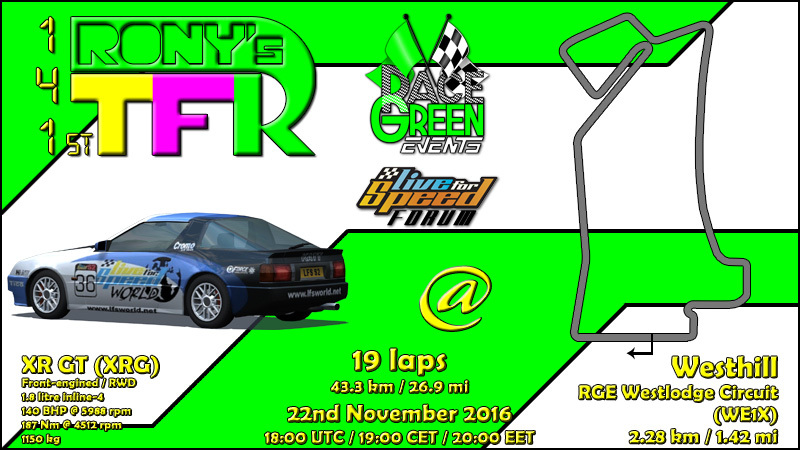 Server is up and running: Ronys Tuesdays Fun Race (feel free to spam the Airio top table with your laptimes)
Nilex

Dayum this looks very gut. I'll make an effort to remember.. Will spread the word so more people show up. I the meantime hang up that Sun nice and high will ya. Starting time is start of qual or race?
UnknownMaster21

The given time is start of the 1 hour qualifying.

It's okay! I just recently got banned from one server which there is XRG available. So salty about going faster than actual racing line.

( not that I really care though )


Anyway, I ( or we ) will be there. Track looks cool!
mbutcher

Since there are discussions about cutting,I'll post this to straighten things out from point of organisation.
Originally in RTFR there is this rule:

Knew it, 1st lap will be chaos, I tried to reverse my car like backwards, to take less space, but people were just ramming like a hell. 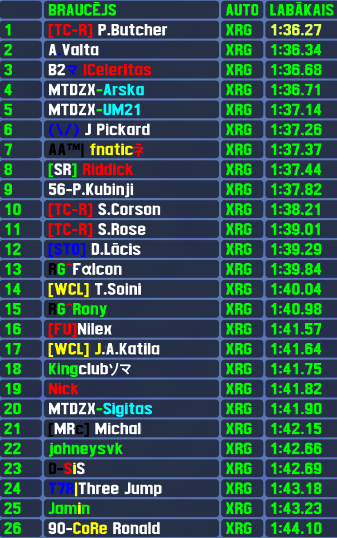 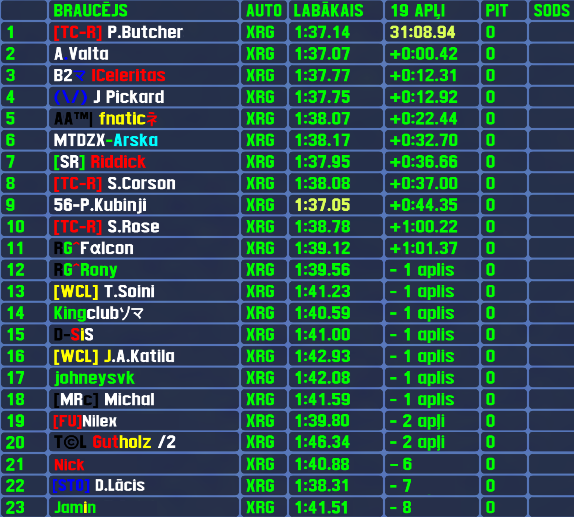 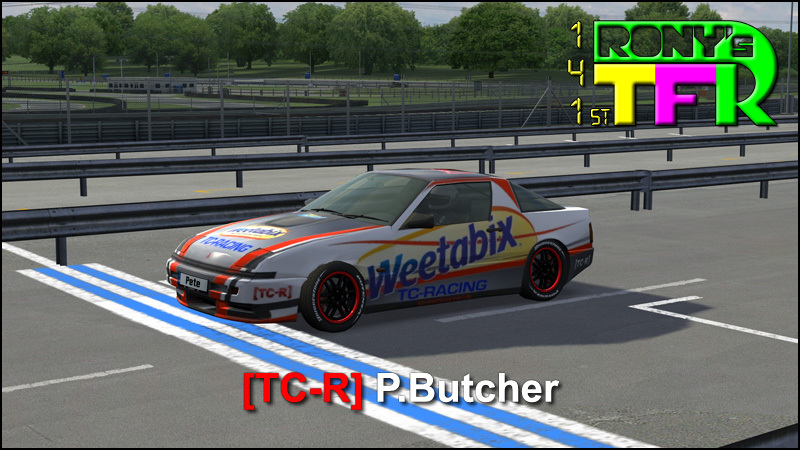 It's known that RTFR is a racing event of contrasts - 2 weeks ago we were racing with LFS's fastest car with average speed quite a bit over 200 km/h,but yesterday we had a race,which was 4th slowest in RTFR history,reaching just 83 km/h average speed. The narrow,tight and twisty Westlodge circuit attracted way more drivers then expected,causing also the first ever RTFR traffic jam early in yesterday's race,practically splitting the field in 2 halfs. On negative side - during this traffic jam we could see very unpatient drivers trying to push spun cars,hindering better recovery for them and by that holding up the rest even more. Also some participants deffinitelly had to go wild on lighter approach towards cutting and misused the freedom by going quite extremely off-track. You can thank them in later events with similar tracks when you encounter more barriers reducing run-off areas.
Anyway,let's take a look at the results as that's the main reason for this post! P.Butcher was the fastest during qualifying and used the advantage to lead every single lap of the race,allthough he was passed by his closest rival couple times during the race,he still crossed the finish line first and collected another victory. In his account now are 4 wins,5 pole positions and 15 top5 finishes. A.Valta was the fastest during pre-event practice,but had to concede in both qualifying and race - allthough he finished just 0.42s behind winner,which is 5th closest finish in RTFR history. 8th top5 finish goes into A.Valta's stats. ICeleritas visited the RTFR for the 2nd time and in yesterdays race he improved his best finish from 11th to 3rd,J.Pickard collected his 6th top5 finish with 4th place,but first time participant Fnatic closed up the top5. What is still missing in this list? Yes,right - the fastest lap owner! P.Kubinji was one of the drivers caught up in the traffic jam,so he missed out the chance for better position then his finish result of 9th place,but in penultimate lap he set the fastest lap of the race,adding 3rd of them to his achievements.

After 2 weeks break we will increase race speeds and most likely also track width as one of the slick tyre cars will be awaiting to be taken for a spin or two,make sure you don't miss out the action as only 2 more RTFR races are left in this year!
Gutholz

LFS finally has its answer to Macau's Lisboa. Thanks Rony 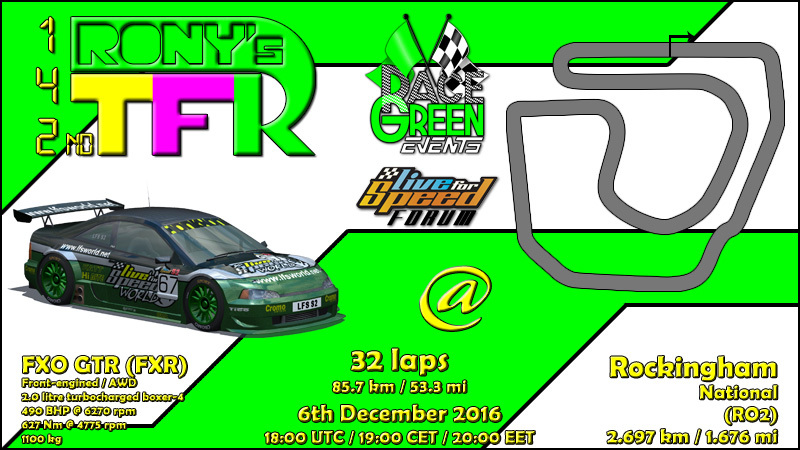 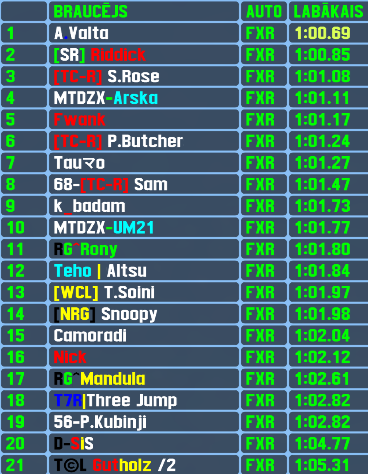 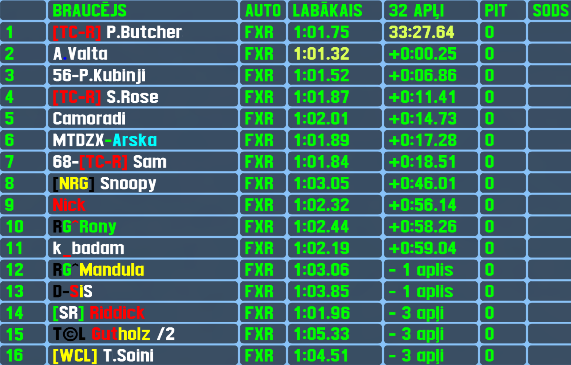 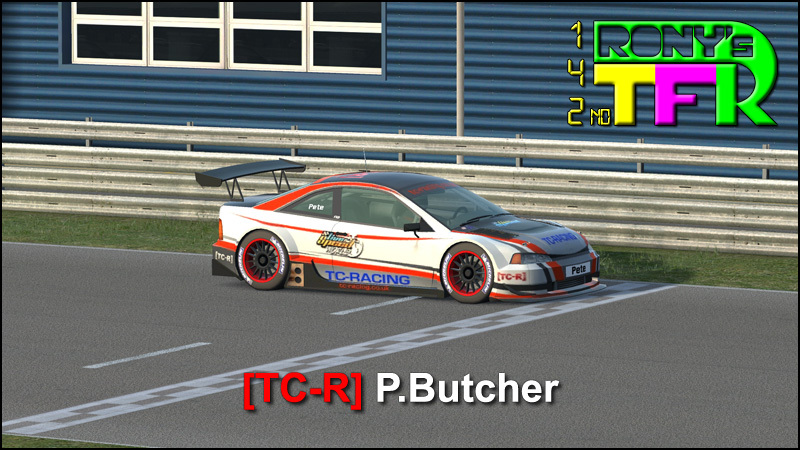 Yet another tough track and another tough race - lack of overtaking chances around the infield track of Rockingham probably led to few unnecessary incidents. Despite some complaints,no penalties this time as the incidents can be defined as racing incidents. But would be nice if drivers would have some more respect to their competition,give some room for others,avoid any contacts and... Well,you get the point - let's race cleaner! You don't have to be friends on track,but please don't make enemies either!

P.Butcher was in the front row seat to watch half race lasting battle for leading position and used the chance to jump ahead when both leaders tangled with 3 laps to go - this is the short way to describe how he became the 9th driver in RTFR history to win back to back races,and besides Y.Laprevotte,P.Butcher is the 2nd driver who has a winning streak within last 65 races,while he is the first repeating winner in last 8 races. Also the yesterdays winner becomes the 11th driver with 5 or more victories,while also adding up the 16th top5 finish to his stats. A.Valta was the fastest on track yesterday - and that was proven by fastest lap in both sessions (both pole position and fastest lap of the race are his 6th achievements),but his pale start led him into chasing position practically for the whole race - he finished 2nd by setting 4th closest finish in RTFR history,which was his 9th top5 finish. Interestingly the finishing duo P.Butcher/A.Valta has set 2 of 6 closest ever finishes in last 2 races. P.Kubinji came late into qualifying and had to learn the combo during the race - he was still able to climb up to 3rd position in finish which is his 1st non-victory top5 finish for him besides 2 wins,current rating leader S.Rose finished 4th collecting up his 14th top5 finish,but 2nd best climber Camoradi finished 5th,which is his 6th visit in top5 of the race results.

In 2 weeks the last RTFR of the year 2016 is scheduled - normally a road tyre car would come,but since it's the holiday season race,I might not stick with normal "schedule" - but let's see what good combo will come into my mind next week... 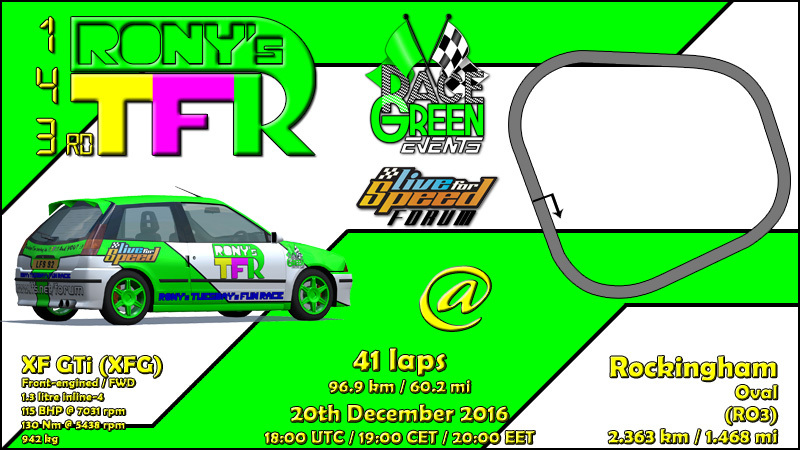 To answer the upcoming storm of questions about bumpdrafting,here's Race Green Events statement on this topic:
"With closed wheels cars bumpdrafting is not forbidden,but in case of any reported incidents it will be treated as intentional contact."