I apologize deeply that crash, I guessed wrong and I did not react enough, it was completely my fault...

( I thought you steer left more, and I followed Pickard a bit too much ( if it was him ahead ) )

( checked on replay, I followed Pickard's line a bit, while you hitted wall what I did not notice, that is indeed nasty wall, failed my good qualify lap there as well. Would had been cool to overtake between you and wall )
Last edited by UnknownMaster21, Tue, 13 Sep 2016 19:37.
pik_d

Sorry about that spin, at the time I felt like you were moving to the left to force me out of the pass, so I just stayed in it and you spun. Looking back on it its not what I thought at the time, so sorry about that.
mbutcher

my first lap perspective. It was a nice race.
MandulAA

Aaaand here's my livestream ... I messed up my great race 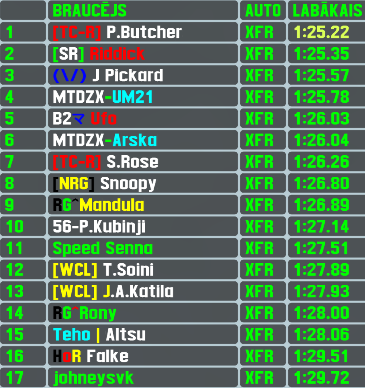 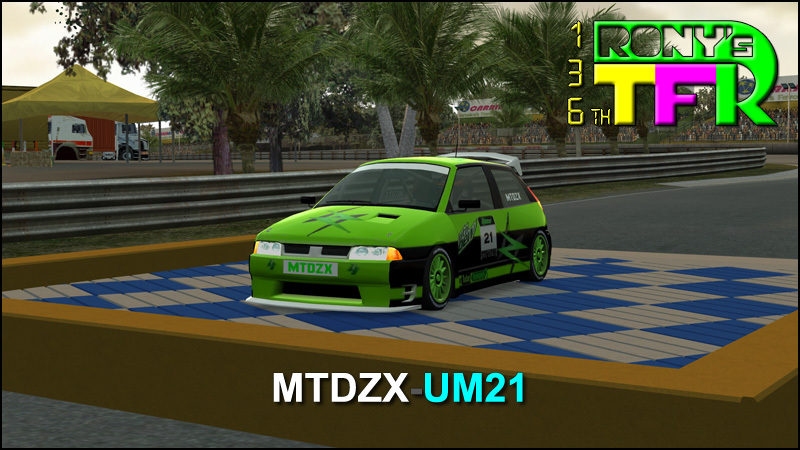 Yesterday at Survivor: Fern Bay edition on RTFR... Seems like the best way to start the short report about yesterday's race,which was run with one of the rollhappiest cars in the most rollfriendly environment of LFS. To be honest - I did not had much time to observe the situation in front of the field because I was also busy to keep my car on wheels - still had to concede to turn one with 5 complete rolls before limping the reshaped car to finish...
But anyway - the winner of yesterdays "Survivor" episode was UM "the showoff" 21 - he started from 2nd row and used the situation ahead to jump into lead in lap 3 and he led every single lap after that to become 52nd member of the exclusive RTFR winners club (12th finn),it was also his 7th top5 finish. Defending winner S.Rose finished 2nd less then 2 seconds (27th closest finish) after winner,collecting his 9th top5 finish,while winner's teammate filled the remaining spot on podium,upgrading his only previous RTFR finishing position from 12th to 3rd. 4th place was taken by Snoopy,who repeated his best result again,3 top5 finishes in his account now,while D-Sis closed up top5 with his 2nd top5 entry. There are also 2 other honorable mentions,who did not cross the finish line though - P.Buthcher won the intense hotlapping battle in qualifying and added 4th pole position to his achievements,while L.Kovács was able to set the fastest lap of the race,which is not only his first such achievement,but also for all hungarians - he's still classified in results as he completed 50% of the race distance.

2 weeks break as usual,after that we gonna roll... ehmm... race somewhere else with something else,but same time,same virtual location!
versis

Great summary Rony, and fun footage Mandula. I'm quite happy with the result, trying to play it safe payed off in the end. And UM21 showing off, I just saw it in Mandula's steam, hilarious :-D
MandulAA

Yep, those side wheelies were awesome (IIRC, one happened in front of me, one when I was already out). 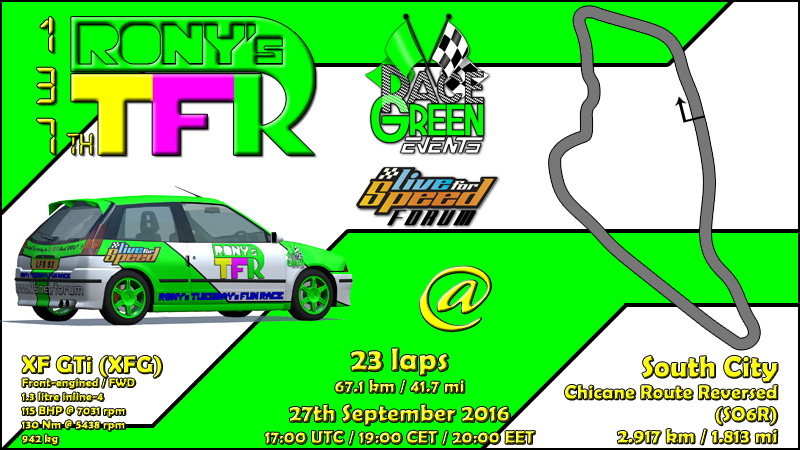 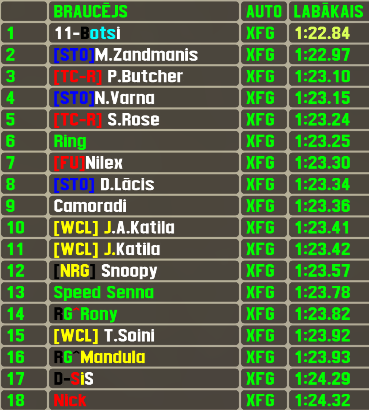 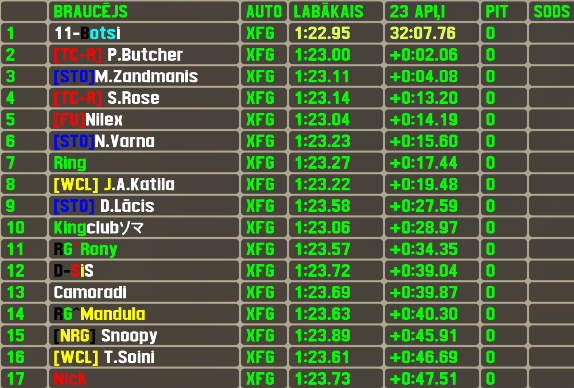 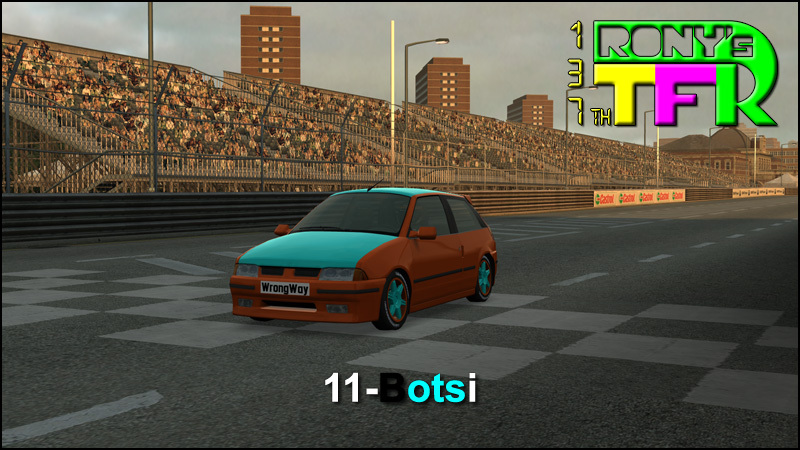 After 2 weeks another RTFR is planned,then racing will return to racing cars,as slick tyres will be used for next race!
Eclipsed 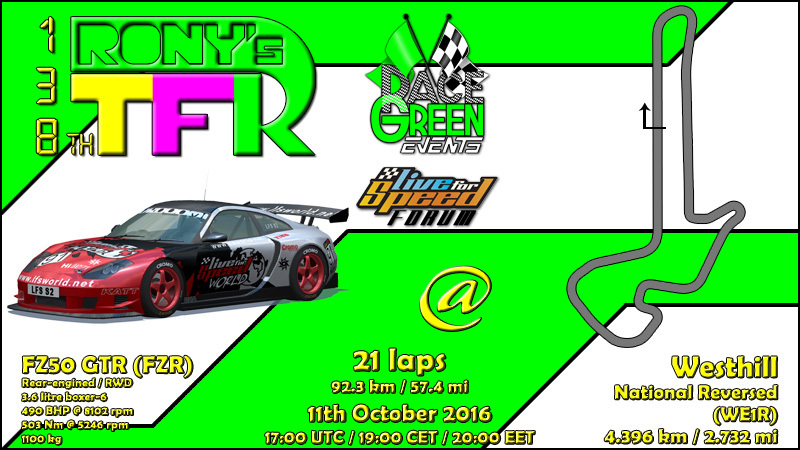 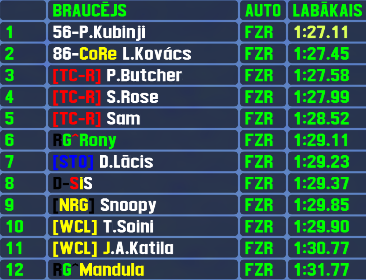 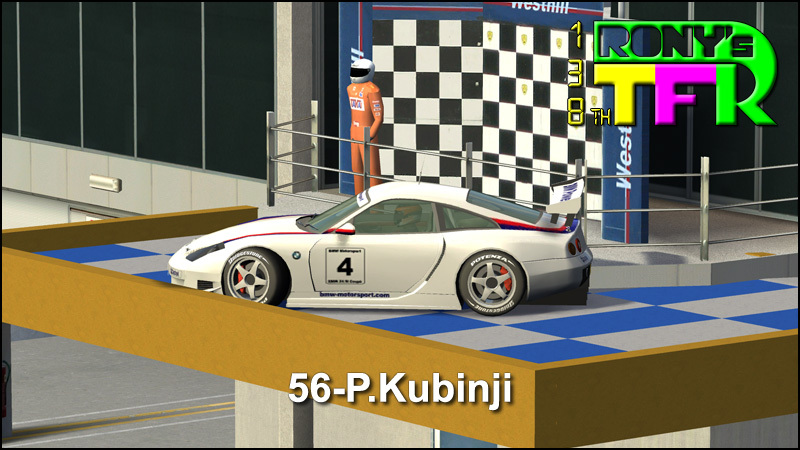 After joining qualfying just in last quarter,with first lap P.Kubinji already set quite dominating pace to secure his first pole position,which was converted into his 2nd win with "ease" as he saw his competition just in mirrors. He also set fastest lap of the race,which is his 2nd,also it was his 2nd top5 finish. Best of the competition was P.Butcher,who gained a position between start and finish - he finished 2nd,adding 13th entry in his top5 list,L.Kovács was the one,who had to lose this 1 position and finished 3rd,which is repeated his best position and also his 2nd top5 finish. 3rd top5 finish for Sam,who finished 4th,while S.Rose made 3 TC-R drivers into top5 with his 5th place finish,increasing his top5 finish count to 11,also these 2 drivers switched positions between start and finish.

2 weeks break again between RTFR races,then we will have one of the road going cars on our racing menu,more info as usually in weekend before the race.
versis 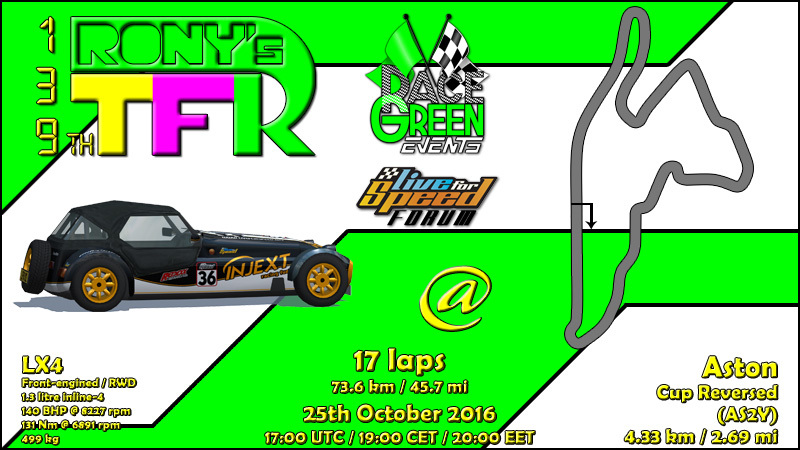 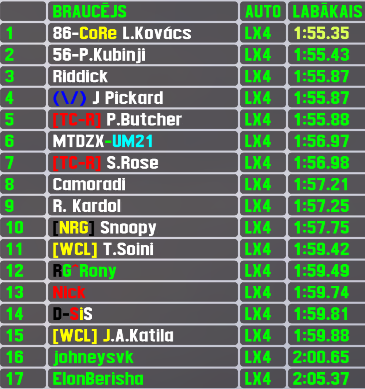 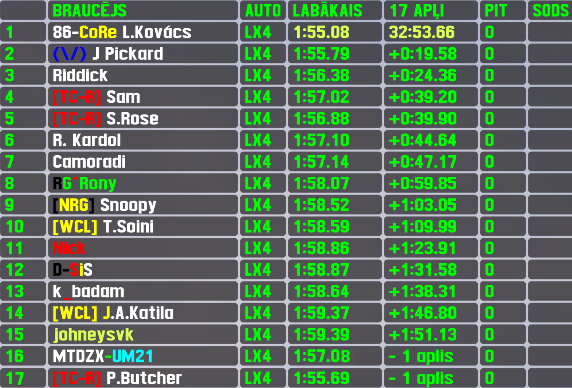 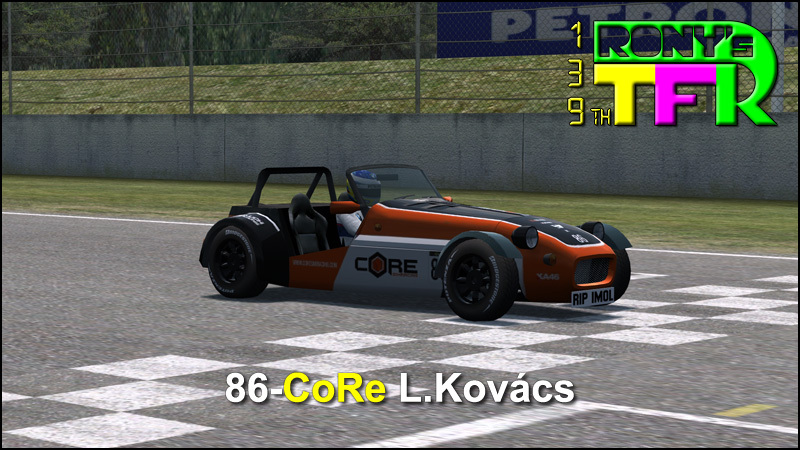 After yesterday's race number of countries having a winner at RTFR increased to 21 - L.Kovács lost his main oponent early on by opponent's own mistake and was able to race to finish rather stress free as the gap to closest follower almost reached 20 seconds. Besides the first win for himself and Hungary,L.Kovács added to his stats also 2nd pole position,2nd fastest lap and 2nd top5 finish. J.Pickard was the only other racer on lead lap besides winner,who was able to complete a lap under 1:56 during the race,taking deserved 2nd place,5th top5 finish into his achievements,Riddick finished in same position he started and collected his 4th top5 finish with the 3rd place yesterday. 4th top5 finish for 4th place finisher Sam,who was top climber yesterday with 13 positions gain,his teammate finished in same second,but still a position lower - his 5th place was 12th top5 finish.

After this steering wheel and throttle workout yesterday,2 weeks later some of the slick cars will offer a workout of their own style,make sure you don't miss out!
Last edited by Eclipsed, Wed, 26 Oct 2016 17:49. Reason : quick fix due post below...
mbutcher

Yeah, that kinda annoyed me actually, could've been a good, close race for the other podium positions.
UnknownMaster21

Highest top speed should give bonus point :-D
am I the only one using shifter (which got loose on first lap btw)? Lazy bunch :-p
k_badam

I always use a shifter, apart from when my arm is broken

Troy usually kicks our arse with shifter and manual clutch, when he bothers showing up