yes as i said it depends what you mean by "moving forward". please make a list of things lfs can't do because it supports xp.

i helped you a bit with my blur suggestion

you can add bloom too maybe!
cargame.nl

Extremely funny topic by the way; https://www.lfs.net/forum/thread/31341 ... It's an exact copy of most of the messages now, 7 years later. Blabla bored content, when is new patch coming, blabla. Patch 0.5Y was being discussed back then which was released two months after this topic. What was 0.5Y about? New physics! New car, updated tracks.

But, for some reason it didn't appeal to aaltomar. So, well.. It's not directed to you personally aaltomar but you represent a big zombie community within the community... What are you actually waiting for?
dawesdust_12

IIRC: aaltomar did a lot of hotlapping and posted a decent amount of WRs to the charts (unless I'm mistaken)
Scawen

No, there's no way I would have said that because it doesn't make any sense.

We just recently moved from DX8.1 to DX9 so that we CAN move forward graphically. It's now up to me to program vertex and pixel shaders and work them into our systems. We have already done some of that and there's a lot more to come.

Just a reminder to anyone, moving to later versions if DirectX never changes anything immediately, they just allow you to access some more features of the graphics card. The biggest step relevant to LFS is DX8.1 to DX9 as it allows the use of pixel and vertex shaders using the HLSL language. This is gradually affecting LFS as we go forward.

It allowed the higher frame rates with many cars on screen (although the look was not changed, yet). It allowed the 3D anaglyph mode (which is not very useful really but interesting) and allowed me to program chromatic aberration correction on the Oculus Rift. It also allowed me to write the new hidden object removal system which is far better than the old one and your next patch should not have objects popping up randomly and not being visible when they should be.

OT: The Rift, by the way, caused us to look very closely at the graphics (because the pixels are a bit big in there) and we removed loads of the "alpha test" textures that made trees (and many other things) look blocky and ugly. LFS graphics came along a long way for 0.6G but many people have already forgotten that and claim the Rift doesn't benefit most people.

So... DX9 is a thing that helps us to go forward. It is not holding us back in any way.


Yes, there is nothing in that post to say we are being held back by retaining compatibility with XP and Linux (using Wine).

Note, you said yourself that 4% of people still use XP. All I have said from the beginning is there is NO REASON to make LFS unavailable to those people (and all Linux users). I'm not saying "it's a great pity that we still have to cater for these people". I'm saying, "it's absolutely no problem to let it run on XP because there is NO REASON to move onto later versions of DX".

Another thing I've said before is it is GREAT that LFS can work on older versions of Windows or even Linux. I am so happy about that because it defies corporate greed. LFS is one of the tiny things that opposes the insanity of modern capitalism. I can't stand sayings like "grow or die!" and "time is money!" which is the ridiculous propaganda of capitalism gone wrong. Everyone should slow down a bit and focus on quality rather than growth. LFS is part of that and I wish more people would be more patient. Some people are very patient, but others seem like total nutters!

DirectX is like a tool kit, allowing programs to use your hardware. There were many tools in DX8. DX9 got a load of brilliant higher tech tools which were easier to use. DX10 got a couple of extra tools but lost the ability to work with older computers.
DANIEL-CRO

Lets not go too much offtopic. It's just not constructive for anyone ...


How the notes are doing?

I've already posted my thankfulness to Scavier in this topic, but I just want to thank Scawen in particular, because I really respect the way you keep your head cool with all this whining going on.

Scawen about the new tyre physics that you are eventually going to work on. Will also tyre blow-outs (flat tyres) occur more "randomly" for example cutting it on a curbstone, aswell as it being graphicly more visible? (For example, if in F1 a tyre used to go flat or blow out, you can see the tyre thread loosening.) Because this would really enhance the feel of realism for me. Because realitisc tyre physics is amazing, but it would bring a whole new dimension into it if the tyre blowouts and flats, would also have a new level of realism. Because as far as I know, no single Simulator has yet got such realism in flat tyres.
Flotch

Scawen is copy-pasting the list for about 4 hours now onto the forum ... his computer is still running at 100% cpu ...

btw, lots of nice informations to read in this thread (besides the classic moaning, ok ... )

Why not to release a test patch so we can test it(Just for the 'Paths' system)? I can't wait to get this

Scawen stated in his first post (if I understood it correctly) that he intends to release a test patch with this system.
Be2K

now its official - LFS uses licensed VW Advertising - its on the leftside of the electricity pylon: 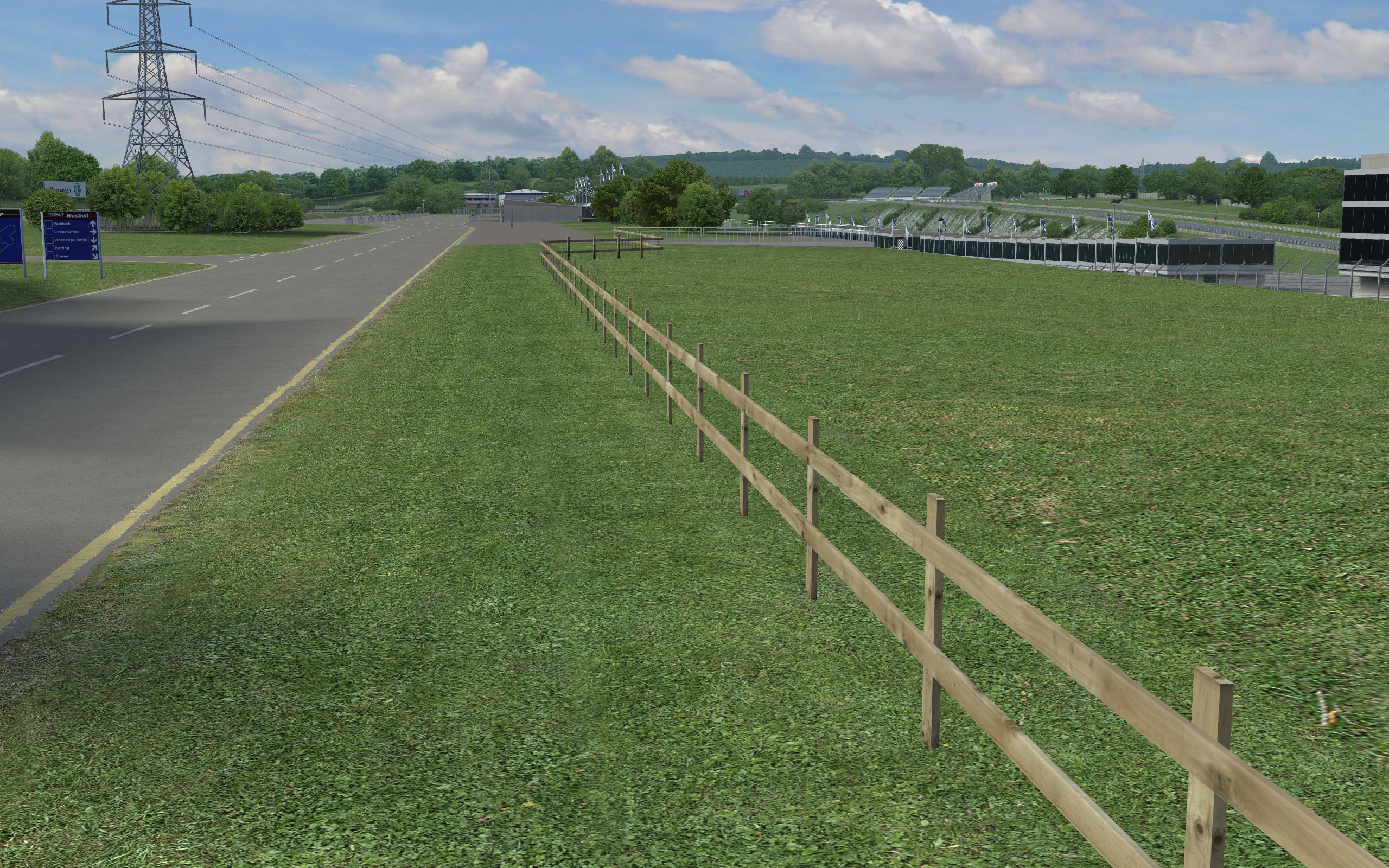 i am not quite sure if you need Contracts with VW but i think its an indicator that VW is involved !
dawesdust_12

FWIW: LFS has always had advertisments in-game with various companies like Castrol and such. I don't know if there's any financial benefits, or Scawen and co approached them as just a way to give some authenticity to LFS (while giving the company free advertising).
nacim

I already founded a glitch in new Westhill a think

Look at this : Why there is seats in the bottom of grandstands ?

this remind me the first screenshot where the FZ5 was appearing

Obviously, the first thing I have noticed onto the screenshot is the mention of VW ... but as it was too obvious, I did not make the link/shortcut with the scirocco

, we were more used of discrete tesaing

Those are the cheap seats.
Ped7g

Be2K: ??
The license for Scirocco has been secured like 5+ years ago, the advertisements were very likely "bundled" with it, whichever side wished for it. Same goes probably with BMW, there are "BMW Power" banners here and there. Probably added after F1 deal?
[Audi TT]

#off-topic
Maybe create a system for to select the track other??
e.g.
I'm racing on as5 track, but I have desire to racing on as3 track.
I suggest to create a layout for all the configurations that you will not be edited.(not to use the command "/end")
Racer X NZ

Thanks for the reply Scrawen, and I'm pleased that while you (sort of) ignored my question about Rockingham, you, in a round about way, answered it.

"In my opinion the community wants firstly new tracks and secondly the new tyre physics. Actually loads of people want the "holy grail" Scirocco. But it's just a medium powered front wheel drive road car... most significant thing about the Scirocco is it kick started the development of the new tyre physics model, which will be really nice to drive when I can get it out there. in the meantime we're sorting out some tracks for people to drive."

Fully agree about the Scirocco, not ultimately important. Also, I fully agree about DX9. XP is still a perfectly fine operating system. It's just that M$ want $$$ so keep on releasing 'NEW' software and making reasons why you 'MUST' buy it.

I did think though that OR was stopping DX9 support from my reading of their forums and requiring DX10 min to get OC working ?
I could be wrong, but that certainly seemed to be implied.
scania

S3 = content package, nothing to do with the tyre physics. So yes.
r8response

WoW... New fences, that'll get all the people who have moved on back into LFS.

Next update has to include updated fire hydrants.
dawesdust_12

That's the sound of the significance of graphics engine updates going right over your head.
vrajunar25

In my opinion, Scirocco should be released before Westhill, if(and that image make it hope) Scawen still has the copyrights for using VW logo/car.

I also hope that will be released for us demo racers :P

And the job done with Westhill, is fantastic

About game physics, imho tyre physics are good, this game should have a better damage system imho, something like xpand rally visive damages, mechanical damages are good
R@fiXII

As far as I remember, Scirocco will be included in S1 content. Someone correct me if I'm wrong