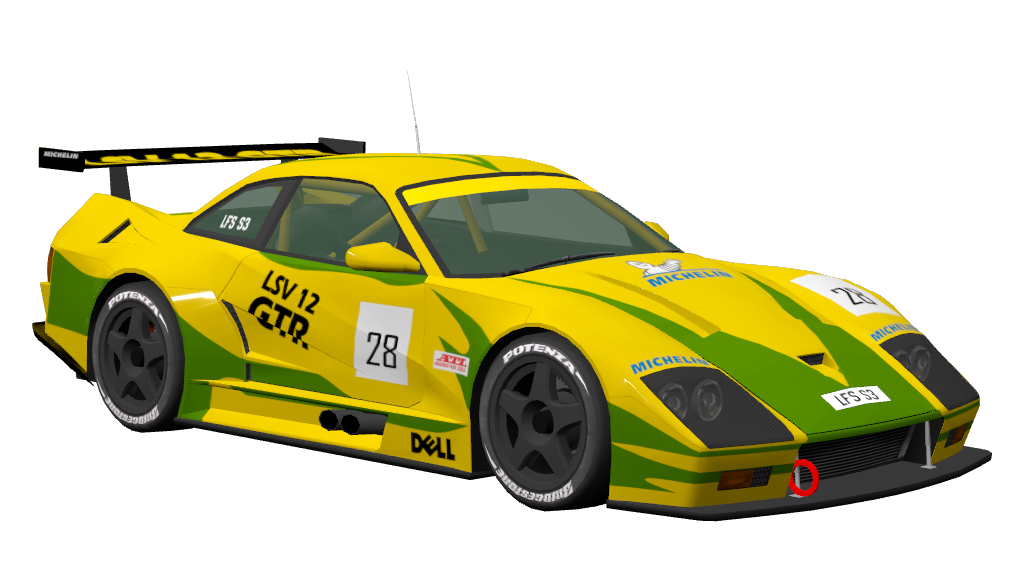 LSV 12 GTR by Ivan CSX Studio
An iconic race car from the past, based on 1992 Lister Storm GT2

With 7.0L V12 with real spec of 560bhp GT2 class, with monster torque 750Nm surely it will be dominating the race if you could handle this heavy front machine

This mod are intended for any league holder to use, if there's a league with GTR car, then this car will be a great candidate to giving some variations in racing with GTR classes, please allow the restriction so the car will be match with GTR class car that already exist on original content (XRR-FXR-FZR)

The author of this Vehicle Mod has indicated that this work is an original creation and has provided the following description of the approach:
based on 1999 Lister Storm GT2

I'm not sure if it's intentional, but there are some bits of wood veneer still visible. Left of dash and bottom of door card. Getting clipping with audio, which I mostly solved by reducing header/exhaust mix, gear volume, and wind/skid without changing the tone too much. Seating position seems quite far back compared to normal. Also some gaps around the doors My bad, it's just some shine on the rollcage making it look like I was seeing sky through the door.

In my opinion you should had leave it original spec and let event organizers use restrictors for car balancing as they do also in real racing.
Also I would welcome a road going version - only 4 of those were built,so LFS users could have a chance to drive one of the "unicorns".
Jake_Blasted

Looks great visually on the exterior, feels great to drive too!
ivancsx

This what I'm considering, does LFS has "force" restrictor to power limit? because actual V12 Jaguar Engine have around 700bhp, which quite monster compared to the other GTR car

And with restrictor, I doubt it will feel way to different or even undriveable since, that's why I decided to do my own "Balance of Performance" myself. but perhaps I'll made a different mod which have full blown 700bhp and 1100kgs, ofcourse with some minor modifications so it will not look similar with this one

and those road version, seems interesting enough to made, but let's see if I have motivation to do it

Thanks for pointing out again ! just checked and duh, my bad.

Gonna fix it soon, and for driving position, I tried to mimics how Lister Storm GT2 are, which is quite back because of big front engine, so yes, it's intentional.
Eclipsed

LFS has the good old intake restrictor - available on same screen in garage where you select fuel amount. So don't worry about power,make it as the real car and additionally you can create a base setup with already added restrictor to match the performance (call it LFS GTR or something like that). But only proper testing will show the right value,which event organizers do.
ivancsx

hmm, what should I put it

I know the restrictor power feature exist, but does event organizer, or admins who held the race (if there's any GTR Classes race session someday) could force participant who are using this car to use the BOP'd setup? because in fairness, if there's no mechanism that forced player car to use specific limited settings, then this car will be out of league using the actual 700bhp/1100kgs, and never be able to participate from anyone league with GTR classes, which was my initially intended to it :/

ahh sorry if my english messed up xD
Eclipsed

When someone is on track,you can see his restrictions in F11 menu when spectating,that way event admins can see what's used. Also it's possible to define custom cars (original car with specific restriction) in airio and it spectates people when not using correct restriction. So don't worry about that stuff and make the car more realistic. Also who knows - in future there might be more cars that could group with default powered Lister in same class.
Gutholz

If the goal is to be an addition to the LFS GTR cars then I would say: Give it roughly fitting performance "out of the box". The last few percentages can be dialed in with weight ballast and intake restriction by event organisers. That is often done with LFS cars, XRG gets 1-2% restriction to race with XFG. In TBO class the FXO often gets 2%, XRT 1% and RB4 is default.
But sometimes on less strict servers the cars are run as-is because the differences are small.

If the differences are bigger then it would always require an admin or script to be present.
Also setups are usually based on non-restricted cars. It could be annoying if the car becomes popular to be mixed into GTR class and players have re-do setups etc.

The real car was used in various series, probably with different adjustments to their changing rules. It was fitted with an intake restrictor at some point, too. So it does not seem completly out of place that when entering the LFS world, it would be adjusted again.
ivancsx

Well, if restriction could be monitored by event organizer or admins atleast, then okay. I'm prepping the real spec of this car soon


I'm not quite sure, because there's lot of version of this car, some of them said 700bhp, and some are 560bhp as you mentioned

But looks like I'll follow the 560bhp one since it was realistic and not so far if "Balanced of Performance" applied, but let me decide and dig more info about it about perhaps recent car spec, so it will follow real spec despite the car exterior not so realistic 😄
MandulAA

Interesting car! Besides the already mentioned audio clipping, I also noticed the dashboard beam light is not lighting up. Other lights are fine.

done updated, just check again and I missed out that small part, thanks for the input

ok so the car understeers and I am wonder if you can fix that I appreciate it. The base setup is just not that good at all.

Thanks for your input, but I doubt it's because the nature of "heavy front" car, but I'll look into it later when I get back to home 👌
ivancsx